The earth-shattering events at CES have left the HD DVD camp reeling, but let’s not get carried away with all this talk of the format being on its last legs. There’s plenty of life left in it yet, with two major studios (Universal and Paramount) still on board, a sizeable catalogue of discs already launched with plenty still to come and most importantly, hardware prices are still significantly cheaper than Blu-ray.

Case in point: the Venturer SHD7001E. This is the first non Toshiba branded HD DVD deck to appear in the UK and at well under £200, it undercuts even the cheapest Blu-ray player by a fair margin, which could be enough to tempt HD fence-sitters to take the plunge. It’s exclusively available from QVC, but thankfully you don’t have to watch the channel as you can buy one from the channel’s website. It comes with two free discs (”Hulk” and ”Troy”) and an HDMI cable in the box, all of which makes this terrific value for money.

You’ll find HDMI, component and composite video outputs, optical digital and analogue stereo audio outputs and an Ethernet port, which makes it possible to update the deck’s firmware and access bonus movie content online – something you can’t do on any current Blu-ray player.


The Venturer differs from Toshiba’s latest HD DVD players in that it lacks 1080p output. The maximum resolution available is 1080i, which means 1080p/24 HD DVD material can’t be transferred from source to screen in its pure, native form. The player has to convert the signal to 1080i/60, which then has to be de-interlaced when it reaches your progressive hi-def display – two additional processing stages that could increase the chances of video artefacts being added to the picture.

The 7001E also plays DVDs, which can be upscaled to 720p and 1080i. And if you’ve got home burned DVDs lying around, it’ll play those too – provided they’re not stored on DVD-RAM.


The player lacks DTS HD and DTS HD Master Audio support, but it will decode Dolby True HD and Dolby Digital Plus. It converts these formats to PCM and outputs them from the HDMI output, so to take advantage of them you’ll need a receiver with an HDMI input capable of handling PCM signals. If your receiver doesn’t sport an HDMI input, then there’s no HD audio for you we’re afraid – you’ll have to settle for regular Dolby Digital and DTS bitstream output using the optical digital audio output.


Hit Setup and you’re presented with the same user interface as Toshiba’s HD DVD players, complete with the gorgeous blue background and snazzy hi-def graphics. It’s straightforward to use and strangely quick to respond for a hi-def deck. Also, the player takes less time to start loading a disc than the ridiculously slow HD-E1. 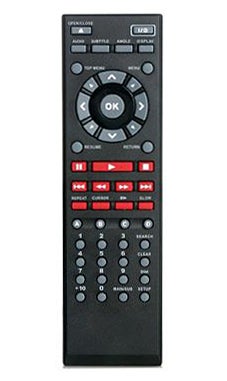 The remote handset is basic and feels cheaply constructed, but wears its buttons in all the right places. The Venturer also responded to our HD-E1 remote, which is further evidence that the deck is a Toshiba in disguise.


We loaded up the free ”Hulk” disc found in the box and were pleasantly surprised by the results. The movie’s striking comic book visuals lend themselves well to the hi-def format, and the 7001E does its best to preserve the disc’s crisp transfer.


Outdoor shots look breathtakingly vibrant, especially the scenes towards the movie’s climax as Hulk leaps through the desert and goes on the rampage in San Francisco. There’s loads of detail on display and colour presentation is impressive – Hulk’s green skin and purple shorts never appear garish or false, making him look as realistic as a nine-foot tall, CG-created green monster can.

Impressive though it is, the picture doesn’t seen as eye-poppingly sharp and striking as other HD DVD and Blu-ray decks we’ve tested recently. At times (particularly during dark scenes) the picture seems a touch on the soft side with some video noise evident, which might be explained by the conversion process explained earlier. It made us wonder how much better it could have been with pure 1080p/24 output, so we hooked up the 1080p-capable Toshiba HD-EP35 and the image does seem a little sharper (but admittedly the difference isn’t huge).


Next we loaded up the ”Hulk” DVD to check the deck’s ‘near-HD’ upscaling, and to be perfectly honest the 1080i picture quality almost matches its HD DVD performance – sure, you can see the drop in natural detail, but the images still possess an impressive boldness and clarity that’ll inject life into your existing DVD collection. Also pleasing is the lack of compression noise.

Sonically, Dolby Digital and DTS soundtracks from the optical digital output are top-notch on a decent system, and PCM playback is even better. Ang Lee’s big action set pieces are delivered with aplomb, with the player’s flawless Dolby Digital Plus decoding allowing the effects, dialogue and bass to be reproduced in a crisp and dynamic fashion. A more accurate test of the player’s audio chops is stereo playback from the analogue outputs, and thankfully it sounds clean and clear whether you’re listening through your TV speakers or a home cinema amp.


If you want a hi-def player under £200 and you’re not phased by the potential fate of HD DVD, then the SHD7001E’s solid picture quality makes it a decent bet, although the lack of 1080p output means you won’t get the full hi-def experience. You’d be better off seeking out the far superior (and currently cheaper) Toshiba HD-EP30, which boasts HDMI 1.3 and 1080p/24 output, or paying a little more for the future-proofed HD-EP35, which adds 5.1 analogue outputs and Deep Colour support.