What is the Venturer PrimePro 12 TS?

The ultimate 2-in-1 laptop would give the looks and usability of a Surface Pro but at the price of a budget laptop. Bitter experience has proved this to be a hard combination to crack, but the Venturer PrimePro 12 TS is the best attempt so far.

The Venturer PrimePro 12 TS certainly has the air of a budget computer about it. At 12mm deep (25mm with the keyboard), this 2-in-1 is a little on the fat side and far chunkier than its premium Ultrabook rivals. The 12.2-inch screen’s bezel is also a little thick, making the overall package a bit bigger than you might expect. Looking at the screen, the left-hand bezel is slightly thicker than the right-hand one, to accommodate the camera. It’s a touch off-putting having the design out of kilter in this way.

That all said, the Venturer PrimePro 12 TS’s build quality is rather good. Although there are some rather prominent screws, the case feels tough and doesn’t have any flex in it. Weighing just 907g without the keyboard, the tablet part is a lot lighter than it looks, too. Adding the keyboard cover bumps the weight to a rather hefty 1.5kg, though. This is down to the keyboard tray packing extra weight to help keep the laptop stable when in use. 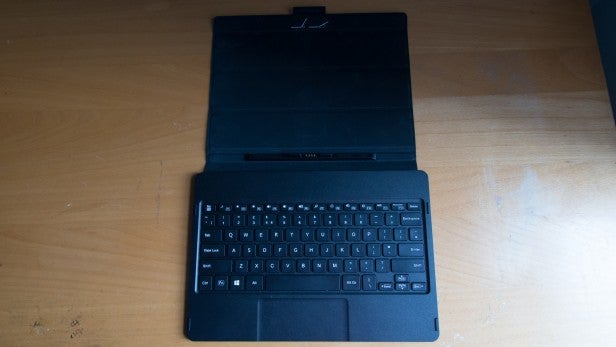 The keyboard cover is pretty well made and folds into a prism to support the tablet part of the PrimePro 12 TS. The cover has two positions: laid back and upright. I found the latter to be ideal for a desk and acceptable for occasional lap use. For those using a laptop on the move a lot, the Surface Pro 4’s kickstand is far more flexible. When you’re not using the PrimePro 12 TS, the cover folds up, with they keyboard sitting flush to the screen. The cover has to be held in place by stretching the integrated elastic over a hook, which is a little fiddly; a magnet would have made so much more sense. 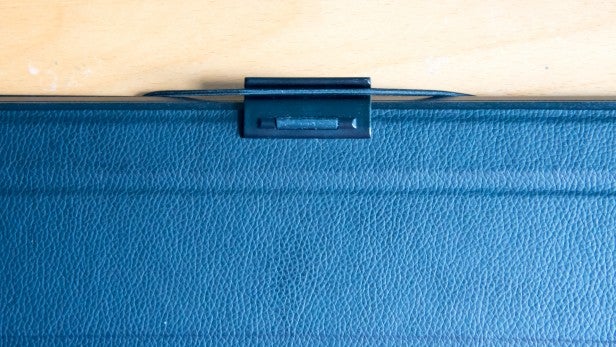 One benefit of having a slightly thicker case is that there should be plenty of room for ports. However, the Ventura PrimePro 12 TS keeps everything on one side, slightly limiting options. You get a USB 3.0 port, a mini HDMI port (no adaptor is provided), and a 3.5mm headphone jack. There’s also a power button and a Windows button, which you can use to open the Start Menu. 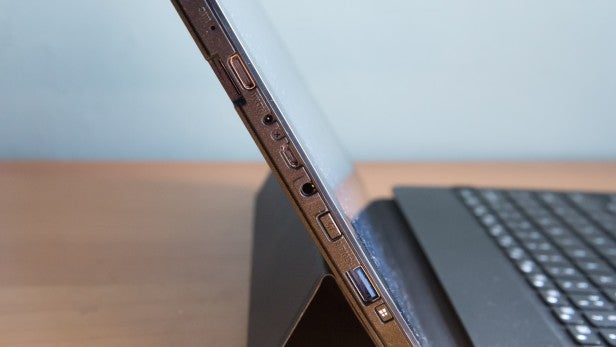 A microUSB port is included, although this is for charging only. It’s strange to include this port and a standard DC input, as it means that there are two ways to charge this laptop. You’ll most likely need to use the Micro SD card slot to boost the internal 64GB of flash storage. It’s a shame that there’s no Ethernet port, particularly as the integrated 802.11n Wi-Fi (2.4GHZ only) is a little out of date and comparatively slow by today’s standards.

A chiclet-style keyboard is rather pleasant to use. I found that it was responsive and I was soon typing quickly and accurately. Given the budget price of this laptop, it’s impressive that such a quality keyboard can be included. Most of the keys are in the right place, too, with only the backslash key moved from its usual position to be placed next to Alt Gr. 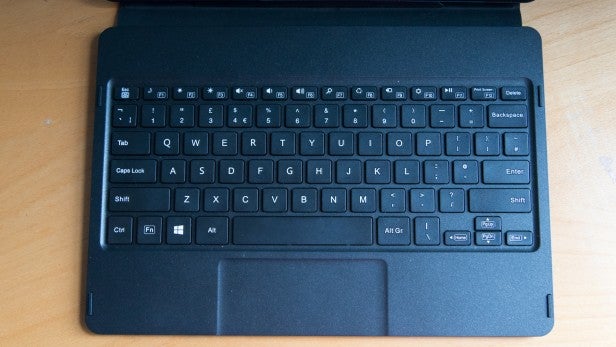 The touchpad, however, is horrible. Rather than a physical button providing feedback, it’s touch sensitive only. Worse than that, I found it hard to perform simple tasks, such as dragging a window. A hard tap with one finger quickly followed up by adding a second finger for movement only worked occasionally. As a result, using the Ventura PrimePro 12TS could be a frustrating experience at times. Multi-touch gestures are supported and generally work well, although I kept accidentally triggering the sidebar to appear.

A 2-megapixel sensor built into the front of the screen is fine for video calls, but colours appeared washed out, and the image was exceptionally noisy. There’s another 2-megapixel camera at the rear, with similar quality issues. This definitely isn’t a tablet that you’ll be using for photography. A single speaker sits at the rear of the case. It’s alright for the occasional YouTube video, but lacks definition and bass. More annoyingly, in the laptop’s upright position, the stand covers the speaker grille, muffling audio. 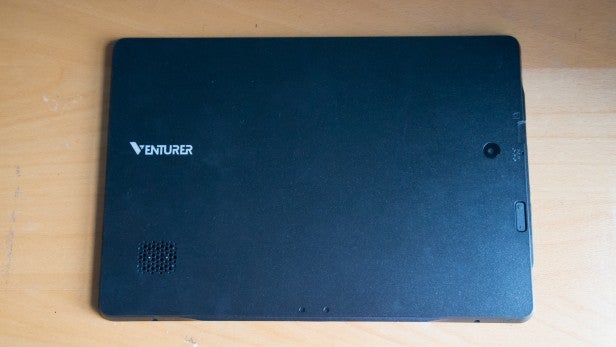 So many budget laptops have such terrible screens, so it’s good to see Venturer reverse the trend with the PrimePro 12 TS. The 12.2-inch screen has a resolution of 1920 x 1200, which is impressive given the price. By comparison, the Asus Transformer Book T100HA launched at a higher price and had a much lower-resolution panel.

Topping out at a maximum brightness of 205nits, the display is a little dim, although more than good enough for use inside. Fortunately, image quality is good for the price. I measured the screen with a contrast ratio of 747:1 and able to produce 86.9% of the sRGB colour gamut, which is about right for a tablet and much higher than similarly-priced laptops.

Those specs are excellent for the price and are born out with with rich, but not oversaturated, colours. The low contrast ratio means that some detail can be lost in the murkier part of the image, but there’s very little to get upset about. 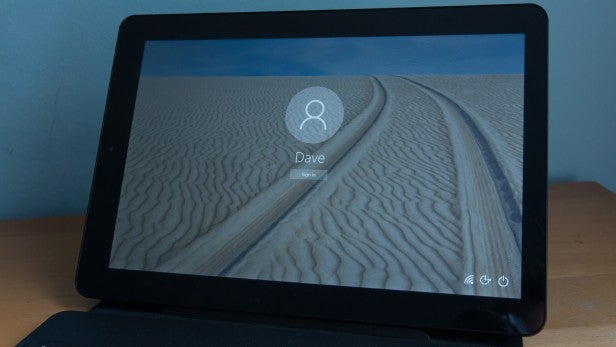 .
It’s a touchscreen display, which gives a different way to interact with Windows 10 and proves to be essential given how bad the touchpad is. Certainly, moving a window is much easier using a finger than it is using the touchpad.

Battery life came in at 5 hours 12 minutes in Powermark, with an hour of Netflix draining 16% of the battery. That’s not terrible, but this certainly isn’t a laptop that’s designed for life on the road. It’s slow to charge, too, with microUSB or the DC input unable to deliver power that quickly.

Powered by a quad-core Intel Atom x5-Z8300 processor, which can Turbo Boost from 1.44GHz to 1.84GHz, the Venturer PrimePro 12 TS isn’t the fastest laptop that I’ve tested. Scoring 1901 in the Geekbench 4 Multi-core test, this laptop is really designed for people with light-use in mind: emailing, web browsing and the like. Anything more complicated and the laptop starts to show its lack of power.

Venturer has integrated 64GB of flash storage. With read speeds of 104.9MB/s, and write speeds of 29.6MB/s, performance is more inline with a regular notebook hard disk. At times the laptop felt a little sluggish, particularly when loading larger applications. This is another good indicator that the Venturer PrimePro 12 TS is aimed at lighter tasks.

Needless to say, you won’t be playing a lot of games on this laptop, as its integrated Intel HD Graphics chip isn’t up to much. Minecraft is just about playable, managing 22fps full-screen and a smoother 50fps in a Window, but you’ll struggle with anything more demanding.

Should I buy the Venturer PrimePro 12 TS?

The Venturer PrimePro 12 TS isn’t the sleekest, most powerful or versatile 2-in-1, but it is exceptionally cheap. Coming in at £280, it is rather cheap for a convertible laptop. If your needs are light and you don’t need a lot of battery power, it’s a good choice, but we’d still like to see a better touchpad even at this price. If you don’t need Windows 10, a Chromebook could be a better choice, such as the Acer Chromebook 14.

A decent budget 2-in-1, provided you only need something for light use; those that don’t need Windows 10 may find a Chromebook a better choice