Just because something looks like the real deal, doesn’t mean it actually is. I can strap on a pair of extortionately expansive trainers, but that doesn’t suddenly make me a world beating marathon runner. By the same token, Venture Kid can pitch itself as an ultra retro 2D platformer worthy of your time, packing in the kind of visuals and soundtrack that harks back to games from decades past, but it doesn’t mean it actually delivers when you start playing it.

In fact, it most definitely doesn’t. Lets be clear, if you’ve never played a 2D platformer before, then Venture Kid does a very good job of piecing together an authentic, if rather generic, experience. If, however, you’re something of an old school action veteran, then Venture Kid feels like a non-event; an uninspired hark back to an era long gone on a marketplace that’s already awash with hark backs to an era long gone. Presumably, FDG Entertainment wants to tap up that former group of people, but then again, if you’ve gone until 2016 having never played a 2D platformer before, why would you start now?

Venture Kid does very little that’s unique to make a case for the genre as a whole, in truth. From the very start things are kept intentionally simple; there’s a button to jump, a button to fire whatever weapon you have to hand, and a virtual d-pad to help you move around. Your goal is simply to survive, picking up gems littered around each stage as you go but also killing everything in your path through stages that look as if they’ve been lifted straight from Sega’s Master System. Though the controls take a large portion of the screen, they’re actually rather well handled and offer the accuracy needed to ensure that any deaths that occur can’t be blamed on a fumble on the developer’s part. 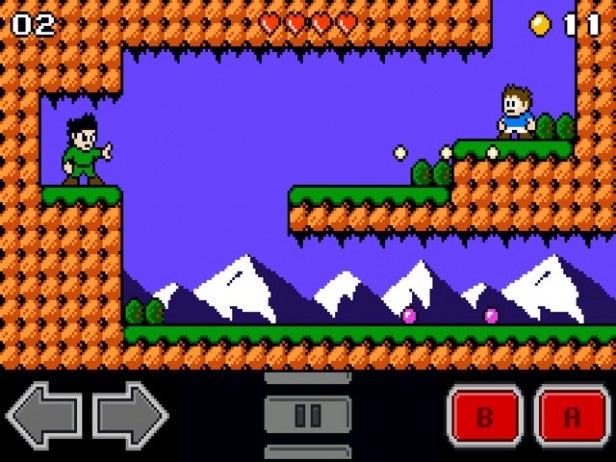 However, the chances are you will die a lot. With four hearts in the bank when you start the game’s very first stage, contact with any enemy swipes off one of those lives and, though you can pick up extra hearts as you make your way through each stage, once they’re all gone death equals death, and it comes rather easily. Venture Kid is a hard, unforgiving beast, with FDG deliberately harking back to an era when players were really made to work for success. The problem is, in order to cope with such a high level of difficulty, players need to have really bonded with what Venture Kid has to offer and, though it’ll naturally be up to the individual to decide if he or she loves play enough to continue, this particular players thinks it falls some way short on that level.

That’s because it’s hard to think of what it does that’s in any way new. If Venture Kid had rolled out on the App Store at the start of the retro revival in 2010 or 2011, then chances are it would have garnered much love simply for tapping into a spirit of old. That’s in no way fresh in 2016, however, and retro-inspired games are expected to bring something new to the table if they’re to stand out on the App Store. Instead, Venture Kid simply feels like a rehash – one made by those who love the games they’re aping, no doubt, but one that nevertheless mimics retro games rather than helps move them forward. 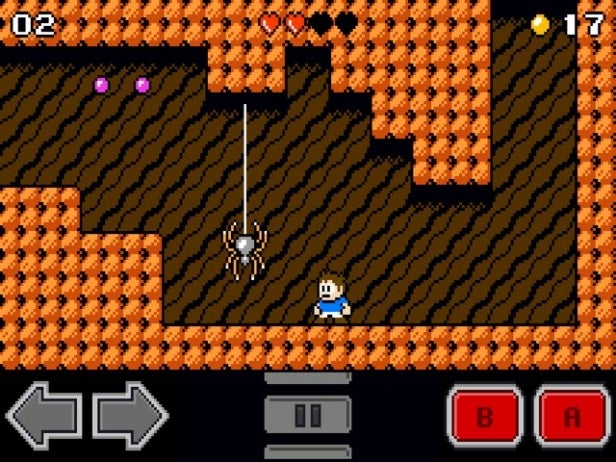 Without getting too broad about things, Venture Kid nevertheless stands as the perfect example of the current retro craze that’s still sweeping the App Store – sweeping the App Store in terms of the number of games hitting the marketplace, that is, not necessarily the numbers downloading them. As much as gamers old enough to remember the era when games like Venture Kid were commonplace might appreciate titles like this popping up, anyone who has an appreciation for creativity – something that’s been a powerful force on mobile over the course of the last eight years – would surely expect more from developers looking to capture that retro magic.

As a result, Venture Kid is one of those games that anyone who indulges in the criticism of games hates – a release that doesn’t do anything wrong and actually feels on the money at times, but fails to do anything of note or warranting of specific praise. Perhaps the most frustrating element is that, with all the basics in place, Venture Kid had it within its power to pick up the baton and run with it. Instead, it’s found itself huffing and puffing somewhere in the middle of the pack.

Verdict
Though in no way offensive or inauthentic, Venture Kid is nonetheless something of a missed opportunity, packing in everything you’d expect of a 2D platformer of old but failing to do anything with it to bring it into 2016. When every game under the sun seems to want to hark back to decades long gone, it’s no longer enough to imitate without innovating just a little bit at the same time.