Subwoofers are a vital part of any home cinema system but if you’re pushed for space it can be tricky squeezing one into your living room. US audio brand Velodyne has the solution in the form of the MicroVee, the smallest sub the company has ever made. Its 22.9 x 22.9 x 24.4cm dimensions make it easy to conceal, but Velodyne reckons this diminutive bass box is still able to muster a big sound thanks to the latest generation of its patented digital amplifier, along with a triple-driver system. 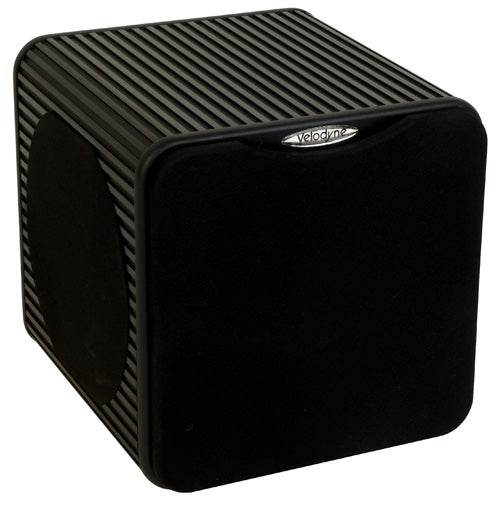 Whipping the unit out of the box, we were taken aback by how compact it actually is, but its 9.1kg weight is a good indication that there’s some serious technology inside. It’s also quite attractive as subwoofers go – our sample was Black Anodized, but it’s also available in white, and both are sturdily constructed using a ribbed extruded aluminium cabinet that dissipates heat build up.


On the rear panel you’ll find dials to control the sub’s volume and low-pass crossover, the latter adjustable between 50Hz and 200Hz, allowing you to achieve a seamless transition between the sub and your home cinema speakers. You can, however, bypass the internal crossover with the Subwoofer Direct mode, activated using a switch on the rear panel, which could be handy for systems that use an external processor with its own crossover control. Another switch on the rear enables you to reverse the phase of the output signal. 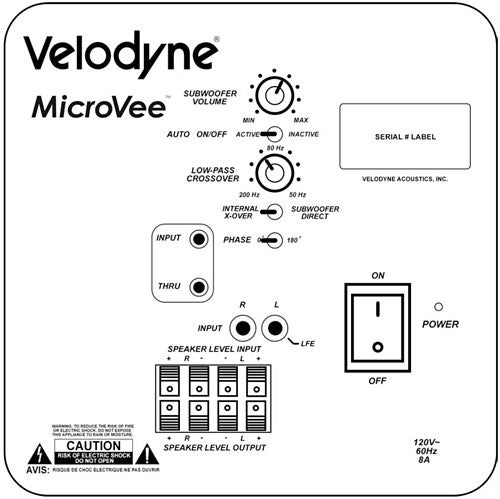 As for connections, you’ll find a gold-plated line-level phono input, which takes the LFE signal from the subwoofer pre-out on your amp through an RCA cable – plus there’s a second input which can be used if a single line level input is too weak to trigger the automatic on/off feature. There’s also a set of speaker level inputs/outputs for amplifiers that lack line-level outputs, plus a minijack input and output that enables you to boost the bass from your iPod dock or other audio devices.


Now the science bit. The MicroVee features one active 6.5in driver, with an aluminium cone and dual-layer copper voice coil, plus two 6.5in side-firing passive radiators with aluminium cones that augment the active driver. These are fed by Velodyne’s patented Energy Recovery System (ERS) Class-D digital amplifier, which supplies 2,000W of dynamic power and 1,000W of continuous RMS power. The ERS amp is rated at over 95 per cent efficiency, which generates minimal heat, while the sub’s frequency range stretches from 120Hz down to 38Hz.


Also on board is the Dynamic Drive Control System (DDCS), an active signal based system that assures linear cone movement and controls the driver’s frequency and distortion characteristics.

Provided you know what all the switches and dials do, the MicroVee is easy to rig up and optimise. And once you’ve run it in and set all the levels to your liking, it delivers a very impressive performance. At first glance it’s hard to believe a box so small can muster so much power, but as an airing of the supercharged ”300” Blu-ray soundtrack demonstrates, this little unit really does fill the room with the sort of rich bass you’d expect from a much bigger sub.


The movie is packed with scenes that flex the MicroVee’s muscles and with every one it propels the action along beautifully. The testosterone-charged battle scenes sound stunning, with the MicroVee lacing the brutal effects with a well-rounded, punchy bottom end that’ll make even the most placid viewer leap from their seat in a fit of adrenalin-fuelled excitement. It’s that good. 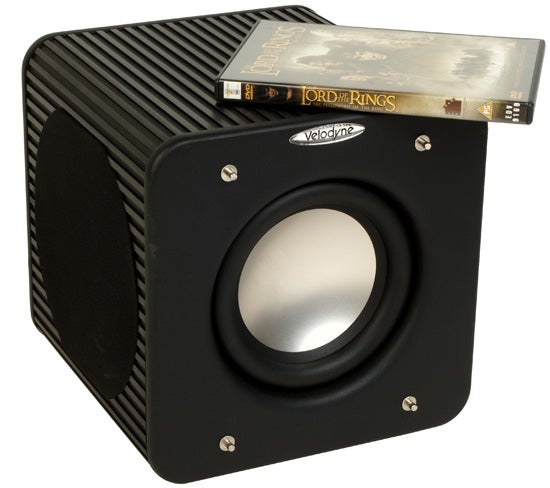 What’s more the score’s pounding drum is reproduced in all its propulsive glory, adding exactly the right amount of drama to the scene in which the Spartans take on the Immortals. And when the mutant rhino charges towards the screen in chapter 20, the impact of its feet thumping the ground is frightening – but in a good way. Turn it up real loud and you can sense it being pushed to its limits with a little shaking here and there, but considering its size you simply won’t believe how well it copes under pressure.


Even during the few quieter moments when nobody’s getting speared through the stomach, the sub’s pedigree is apparent in the movie’s string-laden score, or in the way it delicately colours gentle ambience and distant effects.

But the best part is that the MicroVee builds this solid foundation with a great deal of control, ensuring that the low frequency effects never overpower or distract from the other speakers in our test system. You can also hear the results of the anti-distortion system in the clean, direct nature of the bass output.


The MicroVee is well suited to music as well as movies, and with DVD-Audio material it makes those bass notes really sing. Its natural reproduction of the chunky double bass of Atagiin’s version of ”What The World Needs Now Is Love” is a real treat, and it displays astonishing agility when playing back Miles Davis’ ”Kind Of Blue” on CD, effortlessly keeping pace with Paul Chambers’ beautiful bass work.


The MicroVee is proof that you don’t need a big subwoofer to achieve top-notch bass quality, and its physics-defying ability to deliver muscular sound from such a small box is testament to the excellent technology inside. Sure, ultra high-end systems might uncover its limitations (serious audiophiles may need greater bass extension than the quoted 38Hz, for instance) but if all you want is a solid sub that won’t take up much of your precious space then the MicroVee is an ideal choice.