Available on PS4, PS Vita (both versions tested)
In a world where indie retro arcade shoot-em-ups come two a penny, the team behind Velocity 2X, Futurlab, know that you have to be smarter than the pack. While you might mistake it for an old-school, vertical-scrolling blaster in the mould of Ikaruga or the 16-bit classic, Xenon, Velocity 2X comes piled high with game-changing gadgets that transform it into something that still demands fast reflexes, but also even faster thought.

What’s more, where the original Velocity covered just the one genre, this sequel also packs in a second – the scrolling platform-shooter – throwing in elements that remind you of Metroid, Flashback and a host of others. In fact, Velocity 2X has the spirit of the genre-mashing Commodore Amiga and Atari ST classics of the early nineties, particularly Factor 5’s Turrican. If you’re old enough to remember Turrican and its sequel, you’ll know that this is a very good thing. 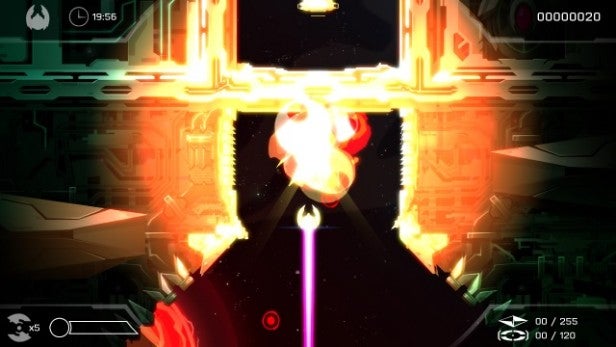 How does this combination work? Well, simple, 16-bit style static cartoon cut-scenes tell the story of a future human test pilot in an experimental ‘Quarp Jet’, cut off from the fleet and kidnapped by evil aliens, then making her escape with the aid of a more friendly alien scientist. The opening levels see you mastering the Quarp Jet, learning how to use its signature ability – a short range teleport which can take you through barriers in an instant. You speed through the levels, finger on the thrust trigger to keep your finish time low, dodging walls, rescuing pods packed with hostage scientists and keeping at least one step ahead of the deadly bottom of the screen.

Then the game throws in the second play-style, as your character races on foot through side-scrolling levels, using new abilities – a dash, a blaster and a variant of the teleport – to break through security and escape. This swift introduction over, Velocity 2X simply merges the two genres together, forcing you to blast switches in order to make progress, but placing some of these switches inside space station interiors, so that you flick from shoot-em-up to scrolling platform game and back, often several times within a level. 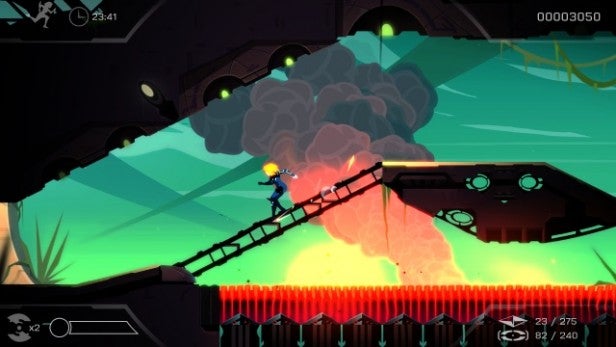 The immediate sense is of a game crammed full of good ideas, but Velocity 2X isn’t done with you yet. First it starts pushing your existing powers, so that you can’t sit and fumble while you teleport; you have to do it while you’re thrusting forwards in your ship, or while you’re running and jumping. Your moves need to flow together. Speed and precision become the key to survival.

Even then Velocity 2X keeps throwing in more toys. First we get a longer-range ship teleport that you can use to cover two or more branches of a branching level by teleporting back to the branching point. Then we get a kind of teleport grenade, which allows you to reappear instantly wherever you can fling the grenade to. The situations and the enemies get tougher, and you have to think faster and fight harder to get through. As we said, Velocity 2X is clever. You can get through the early stages as a slow-moving, pod-missing klutz, but by halfway through you’ll be surging forwards, elegantly managing manoeuvres that you would have sworn were impossible a few hours ago. 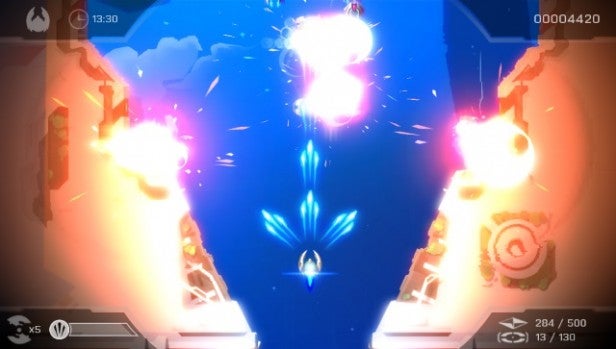 It’s a game that thrives on pace, with bite-sized levels that often keep you on a razors edge for just a few minutes, which just makes it all the more impossible to resist the lure of just one more. It challenges you not with endless deaths and retreading of the same sections – it’s actually quite generous with checkpoints – but with the need to get a low time and a good score. XP earned in each level are needed to unlock subsequent levels, and by playing slowly or carelessly, you’ll eventually miss the requirements. Even the boss battles make you think about what you’re doing. It’s not just a question of dodging bullets then hitting back hard, but of understanding how you can use your abilities to keep out of danger, and keep them under fire. And if a boss isn’t vulnerable on the outside, maybe they’re vulnerable on the inside…

Visually, it’s a gorgeously crisp HD update of those old 16-bit hits, with impressively lavish explosions and particle effects on PS4. Futurlab has been open about the game’s debt to Flashback, and you can see it in the smooth animation of the heroine, while there are shades of Metroid in the character and enemy design as well. Yet if there’s anything that locates Velocity 2X in that golden era, it’s the soundtrack; a storming concoction of huge eighties synths, pounding beats and stalking basslines that adds immeasurably to the retro atmosphere. 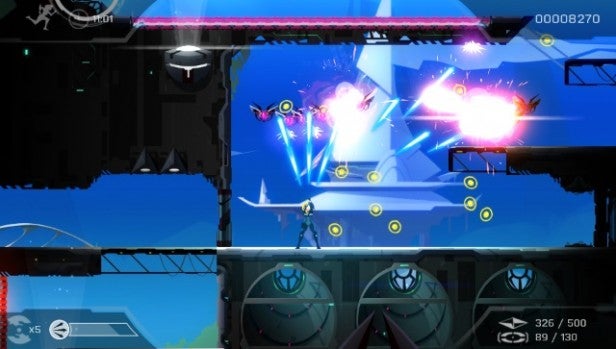 What minor problems Velocity 2X has are easy to excuse. There’s not a huge amount of variety of scenery or enemies, with long sections sharing the same basic building blocks. A few sections feature opaque puzzles which might leave you struggling for a while, and sometimes the controls – particularly teleporting while running and jumping – don’t quite match the levels of precision required. Most of all, it’s hard to switch instantly between the shoot-em-up and platforming setups, not least because the fire button is mapped to X in one and the right-stick in the other. There is ample justification when the platform bits require directional fire, but it’s still a challenge to switch instantly between the two.

Play Velocity 2X, however, and you simply won’t care. It’s a beautifully designed, brilliantly animated and utterly addictive retro hit, which doesn’t just regurgitate the old masters but play around with their most fundamental elements. It’s a fantastic game on PS4 but – with its short stages – an almost perfect game for PS Vita (provided you don’t play it on the train and miss your stop). Whatever system you play it on, make sure you play it – it’s a 16-bit throwback in all the best ways.

Verdict
Velocity 2X takes two classic genres and mashes them up into one almost seamless, retro-flavoured whole. It’s a thinking person’s shoot-em-up that doesn’t stint on arcade thrills, showing how you can not only remake the old masters, but re-engineer them into something ingenious and new.