Quite simply, the Luna doesn’t play nice with all of the smartphones it’s supposed to work with. The official line is that some phone models featuring custom UIs “have connectivity issues or don’t support certain features”.

While we appreciate Vector putting the effort into making its watch work with all three major platforms, it needs to work with them properly. The company needs to iron out its failings, especially as they affect major handsets, including the HTC One M8 and Samsung Galaxy Note 4.

After initially encountering major connectivity issues, where the Luna wouldn’t stay paired with our Huawei Ascend P7 for more than a few hours, we were told by Vector to switch handsets. The Samsung Galaxy A3, we’re relieved to say, encountered no such problems. 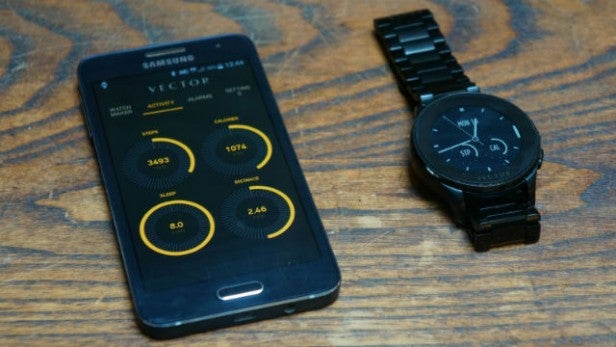 To get up and running, you need to download the free VectorWatch app onto your phone, create an account and establish a Bluetooth connection. You can also add your personal details, such as your height, age, weight and activity level – Sedentary, Light, Moderate, Active or Very Active. The entire process takes a speedy five minutes.

The Luna runs a Vector-developed operating system, which you interact with largely through the mobile app. You can add as many virtual screens to the Watch as you like, all of which can be found in the WatchMaker section of the app.

Under the Store heading are three categories: Faces, Apps and Streams. Faces features a list of analogue and digital watch faces. Activity is our favourite, as it also lets you monitor your activity levels. Apps offers alarms, a stopwatch, a timer and apps from The Economist, ESPN, the BBC and CNET. Streams, meanwhile, lets you choose to add information relating to calories, stocks and weather to your watch face.

To add a face, app or stream, you simply need to tap your chosen item from the list and hit the download arrow. A gentle vibration from the Watch will then indicate a completed download, and the app or watch face will subsequently appear on the watch. Magic. 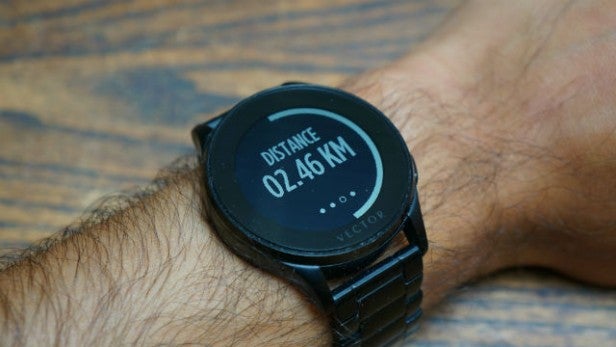 You can also scroll through screens with the up and down buttons on the watch itself, while pressing the middle key will take you into an app or allow you to activate a mode within a watch face, if it indeed has multiple modes.

For example, hitting the middle button on the Activity watch face takes you to separate screens for steps, calories, distance and sleep. Doing the same on the Alarm screen lets you set your wake-up call. The alarm is delivered as a repetitive vibration that’s light, yet substantial enough to bring an end to your slumber.

Vibrations also let you know when you’ve received a phone call, text, Facebook or WhatsApp message, or email, which you can read by turning your watch towards your face and then dismiss with a simple flick of your wrist. In keeping with its “non-intrusive” philosophy, Vector allows you to choose what you receive notifications for.

Being a smartwatch, activity tracking is one of the Luna’s key features. Unfortunately, it’s also one of the weakest. 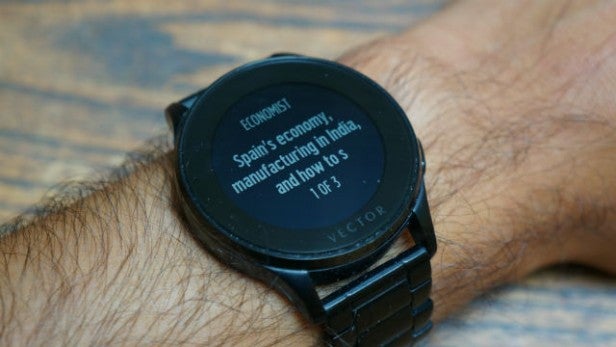 You can set your activity goals, relating to steps, distance, calories and sleep, within the app and, in a similar manner to the system used by the Withings Activité, a series of rings on the Vector Luna Watch show how close you are to hitting your targets. However, the Luna isn’t the most accurate.

A 2.14-mile run (tracked by GPS) only registered as a 0.69-mile run on the Luna, while a separate but similar session registered as 29 measly steps. That’s not good at all.

There are further inconsistencies in the VectorWatch app on different platforms. On iOS, for example, flipping your phone into landscape mode on the Activity page brings up a handy graph of your activity history, which you can view by day, week, month or year. It allows you to analyse how you’ve developed over time. Unfortunately, this functionality has not yet arrived on Android.

Apps require plenty of work too. As mentioned above, the Luna offers four, all of which relate to news. However, all you can do on the watch is view three headlines from each site. Worse still, they’re picked seemingly at random.

Again, Vector says it plans to open its platform to third-party developers, and claims that major apps, including Twitter, Uber, Spotify, IF and Runkeeper, are on their way. This needs to happen sooner rather than later, because the current selection is nowhere near generous or sophisticated enough. 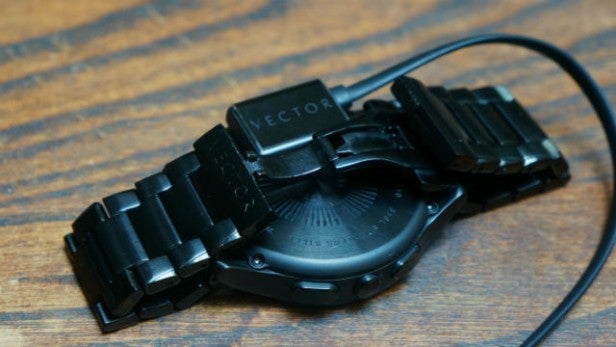 We’ve lost count of how many times we’ve complained about smartwatch stamina. We’re sick of high-end models running out of juice before the end of the day, and Vector’s thankfully broken the mould in this regard.

The Luna is claimed to keep going for 30 days of “moderate” use. This tallies up pretty well with our findings so far. If anything, it may be a conservative estimate. Not having to worry about charging it every night is a major relief.

When you do finally run out of power, you need to use a proprietary charging cable with a magnetic head to boost it back to full health. Once you’ve attached it to the back of the Luna, the screen transforms itself to display the time and battery level. Our only criticism is that there’s no battery level indicator in everyday use. 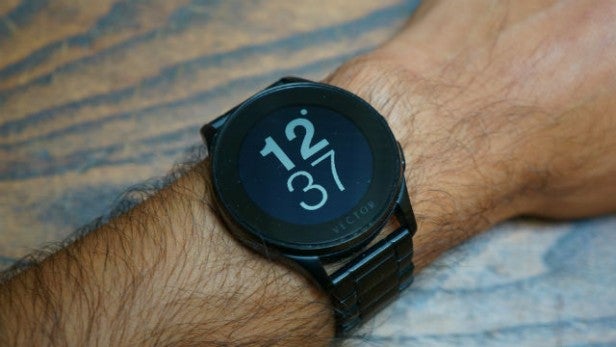 Should I buy the Vector Luna Watch?

Not right now. We were really excited about testing the Vector Luna Watch, largely because of how different it is to most other smartwatches on the market. It’s handsome, but quietly so, and we can’t stress the importance of lengthy battery life anywhere near enough. A month between charges is truly a wonderful thing.

However, while solving two of the most irritating smartwatch issues, Vector’s left several other unaddressed. Dodgy activity tracking is a real low point. For such a central feature to be so unreliable is beyond disappointing.

Lacklustre apps and iffy connectivity are worrying too, but both are fixable and supposedly being worked on. A number of big-name programs have been promised, but we can’t make a judgement until we’ve seen and used them.

When you’re parting with £219, a work in progress is not what you’re after. While impressive in patches, the Vector Luna Watch still needs attention.

Terrific battery life doesn’t make up for the clear software and tracking shortcomings.