What is the Vantrue OnDash R2?

The OnDash R2 is a fairly standard dashboard camera from little-known company Vantrue. With so many manufacturers now vying for a piece of the dashcam pie, it’s becoming increasingly difficult for any of them to differentiate their products. So is Vantrue able to offer anything to make the OnDash R2 stand out from the crowd?

There isn’t anything particularly novel about the OnDash R2’s appearance. Its design is finished in a reasonably satisfying combination of chrome effect, black plastic and brushed metal.

At one sits a mini-HDMI connection, and there’s a microSD card slot on the other; USB and analog video output are located on the top. The rear of the device is dominated by a decent-sized 2.7in LCD screen, with menu control buttons on either side, allowing you to at least view settings and video previews clearly.

Related: Best dashcams to buy in 2016

Amazon’s listing on the OnDash R2 is a little misleading, however. The site’s specifications say that this dashcam shoots Ultra HD (in other words, 4K) – but it doesn’t.

These features are provided by the increasingly familiar Ambarella processor, in this case the A7L50, partnered with an OV4689 CMOS sensor. This configuration is similar to that of the JooVuu X and, like that dashcam, there’s no mention of the size of the sensor either. But the chips are designed specifically for dashboard cameras, so include features for this purpose. 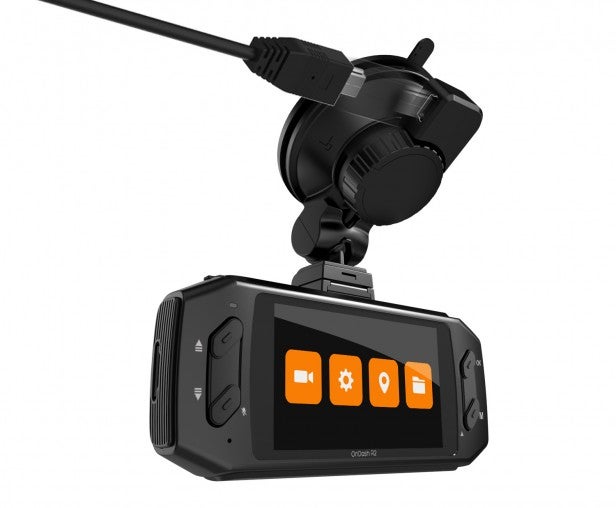 The Ambarella chip affords some extra controls over video quality. There are soft, hard and standard contrast settings, and the same range for sharpness. Two indoor and two outdoor presets are available for white balance, as well as auto mode. Exposure can be varied between -2 and +2 EV, with 13 steps. There’s a wide dynamic range available for all resolutions, in addition to the HDR Full HD option.

Yet apart from parking mode, where the camera will detect motion ahead when stationary and record a clip, few of the natty extra features that can be taken from an Ambarella processor – such as collision detection and lane departure warnings – are available. With only a 320mAh battery on board, the OnDash R2 will require an external power source to make the parking mode really useful.

There is a menu section for a GPS, so that location can be stored alongside the video, but this requires an optional extra receiver to actually work – about which I couldn’t find any information or anywhere selling it.

A G-sensor is built in, however. The OnDash R2 has the usual dashcam ability to loop recordings once the storage is full, overwriting the oldest clips. But any time the G-sensor detects an incident, it will take the most recent recording so that it won’t be deleted, in case you want to use it for evidence.

The G-sensor proved quite sensitive in Medium mode, detecting a lot of car moves as incidents. As a result, I’d recommend using the lower setting.

The OnDash R2 takes the usual mounting strategy for a dashcam. It’s designed to hang down from the top of the windscreen, possibly even behind your rear view mirror. The USB power connection is integrated into the mount, so you only need to slide the camera into the mount to hook up power as well. 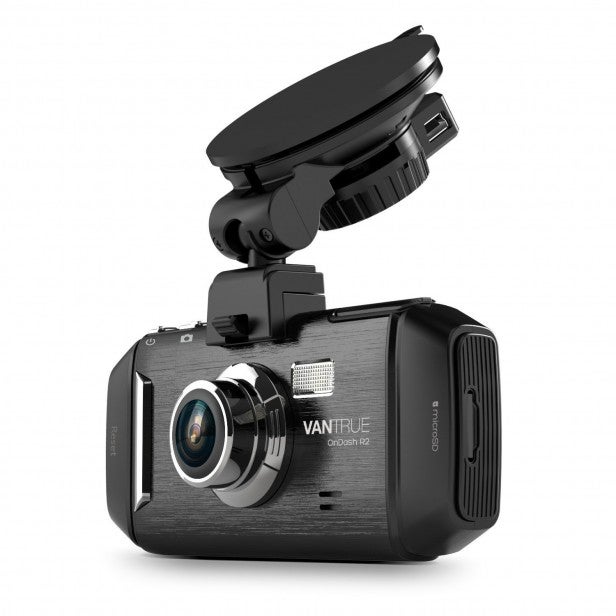 The mount connects to the screen quite securely. As a potential bonus, the car power adapter – which is at the end of a very long cable designed to fit round the edge of your windscreen – also integrates a secondary USB power connection. So if your satnav uses a USB-based adapter, or you need to charge your phone, you can still plug it into power, or invest in an alternative cable.

In theory, anyway. I attempted this setup with a TomTom satnav and it didn’t receive any power.

In terms of the quality of footage, the OnDash R2 sits somewhere in the middle of the range of dashcams I’ve tested. Contrast is handled reasonably well, but I’ve seen slightly more detail in the best units I’ve tested. A bright sky tends to make shaded areas rather dark, which the HDR option improves upon only slightly improves.

A sample of the Vantrue OnDash R2’s video quality can be found here.

You also need to be fairly close to vehicles to read their number plates, which is one of the most important functions of a camera of this type.

The f/2.0 lens has a wide 170-degree field of view, so picks up a good portion of what’s happening up ahead. There are three quality options, which work independently of the resolution. At the top two resolutions, the data rate is a healthy 18Mbits/sec for the highest quality. This means the included 32GB memory card will be enough for nearly 4 hours of footage.

Footage is recorded in MOV format. However, no player software is included in the box, and there’s nothing available via download from the web. So even if the GPS was included, you’d need to find a third-party application to view video alongside location.

In fact, a website for Vantrue is conspicuous by its absence, which is a worry for technical support, although an email address is available to contact the manufacturer.

Should I buy the Vantrue OnDash R2?

At its recommended price of £199.99, the Vantrue OnDash R2 is expensive. However, the real street price of £119.99 is much more reasonable for the features and video quality on offer. That price includes a 32GB microSD memory card, so you won’t need to invest in any storage either.

Overall, though, while the physical design and video quality are decent, the lack of built-in GPS and advanced features makes the OnDash R2 an also-ran in the dashcam race.

The Vantrue OnDash R2 may offer Super HD video resolution but it lacks a built-in GPS, meaning that it isn’t as good value as it initially appears.