If you ask the average person on the street who they think makes the most desirable gaming computers on the planet, they’ll probably mention names like Voodoo PC and Alienware but that’s where they’d be oh-so wrong. That crown is firmly held by the little known system builder from Harrow, Vadim Computers.


You see, what makes something desirable is not just performance but exclusivity and character and that’s something that Alienware and Voodoo don’t have anymore – they’re just too prevalent. Let me give you an analogy:


The Porsche 911 is a superb piece of engineering and a stupendously good drive but they’re ten a penny nowadays and, as Jeremy Clarkson would put it, they have no soul. Morgan, on the other hand, only produce lovingly crafted hand-built works of art that still turn heads whether they’re sailing passed you in the fast lane or pootling along the high street on a rainy winters day. It’s this uniqueness and allure that a Vadim PC possesses and so raises it above the crowd and into super-PC status. 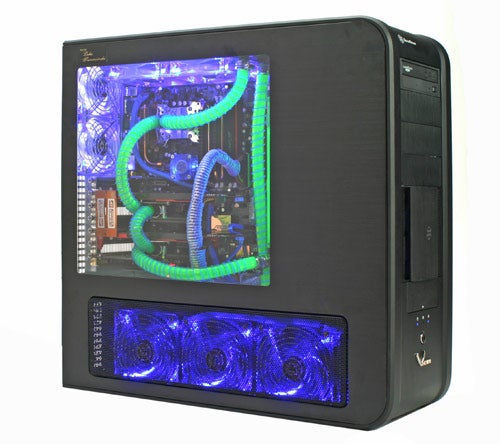 As with any system builder, you can specify what components you want in your PC but with Vadim that’s only the start of the process. First of all you can add in water cooling for your CPU, graphics cards, and motherboard chipset then, if that’s not enough, you can add some fancy side panels with dragons or flames cut into them or even have the case finished in a custom paint job. The best bit, though, is that the engineering wizards will overclock the whole thing to within an inch of its life to ensure you get the absolute maximum performance out of it. Of course, all these extras add to the cost of your system but if you have the money and don’t have the time then there is no easier way to get the best. 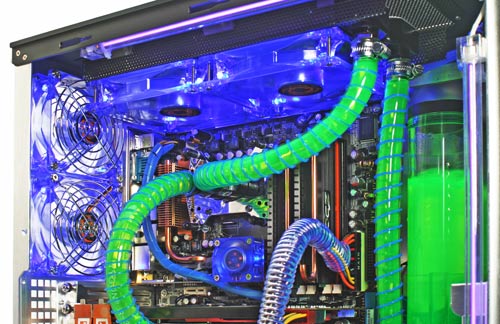 The PC I’m looking at today packs in every bit of performance hardware available and it’s quite a long list, so take a deep breath. It contains an Intel Core 2 QX6800 quad core CPU, 2GB of OCZ Reaper DDR-II memory, two ATI Radeon HD 2900 XTs running in Crossfire, two 150GB Western Digital Raptor hard drives in RAID 0, a 750GB Seagate Barracuda hard drive, a Creative X-Fi ExtremeGamer Fatal1ty sound card, a Dual layer rewritable DVD drive, a 1000Watt Enermax Galaxy modular power supply, an Asus P5W DH Deluxe motherboard, a full water cooling setup, and no less than 11 fans all housed in a Silverstone TJ07 aluminium case. This is one hell of a specification that will make mincemeat of anything you throw at it, all that’s missing are the custom paint job and custom-cut side panels. 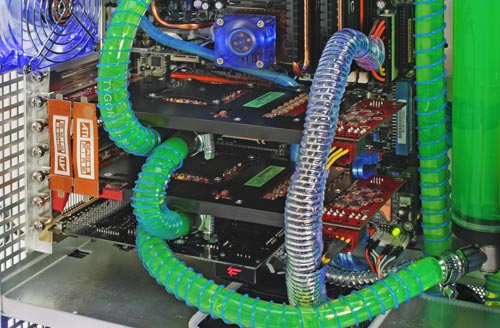 Our particular sample had the CPU and graphics cards overclocked, as well. Standard speed for the QX6800 is 2.93GHz but ours was running at a blistering 3.5GHz. Also, the graphics cards had both their core and memory speeds increased from 742MHz and 828MHz to 858MHz and 900MHz, respectively. In all honesty this set-up was pushing the cooling system to its limits and the entire computer was constantly warm when under load, I personally would feel hesitant running a system at this level for prolonged periods. However, we experienced no stability problems during our testing and Vadim will gladly take the system back and reconfigure it for you if you do experience any issues.

The first thing you’ll notice about this beast is how incredibly heavy it is, so much so that moving it is not a one person operation – at least not safely. All the water cooling combined with a substantial case and multiple hard drives makes for a lot of heavy elements. However, once in position, the set-up process is as simple as any other shop bought PC; just plug in all your peripherals and cables and press the power button.


”If you have very little PC knowledge then Vadim probably isn’t for you as the team assumes a certain amount of experience on your part to be able to plug the right cables into the right sockets without needing manuals to guide you. ” 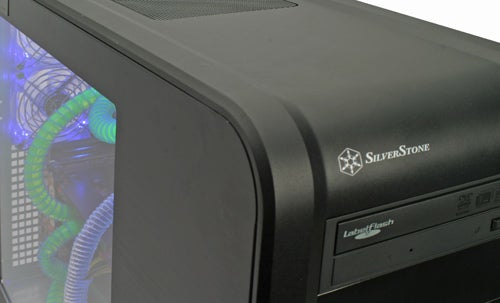 Sitting on a desk (because you wouldn’t hide it under a desk now would you) and turned off, the Vadim looks undeniably impressive but in a sedate unobtrusive way. The case just oozes quality and, looking through the side window, you see that this is reflected in the attention to detail that’s been lavished on the internal layout, cooling system, and cable management. Above the side window is a sticker that says “Built by Luke Szczawinski”, this is something you’ll find on all Vadim PCs as each one is tailor made by a single engineer right from the initial order all the way through to the final stability testing and they will be your point of contact throughout the process. 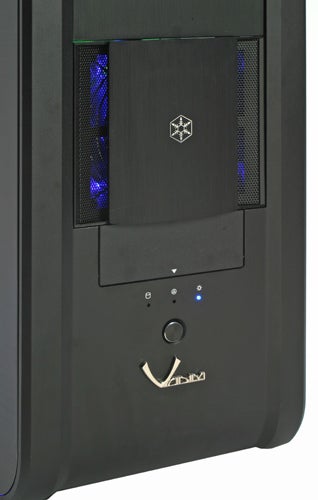 Apart from this sticker and the chrome Vadim logo on the front, the case doesn’t have any external modifications and most of the Vadim trickery is going on inside.


While striking enough turned off, it’s when you turn the PC on that it truly shows its colours. Dozens of LEDs embedded in the fans spring to life and light up the entire case. Additional UV fluorescent strip lights react with an additive in the water cooling to create green glowing rivers of coolant. All the while a soothing gurgling noise is emitted from the coolant reservoir as the fast flowing liquid bubbles and splashes at its surface. After a moment’s pause, the 11 fans will start to spin generating a gentle whoosh as air is sucked into the case, blown over the radiators and pushed back out of the case. The combination of 11 fans running at full tilt would normally create a distracting amount of noise but Vadim has thought of this and only uses ultra quiet fans that spin at such low speeds that they are barely audible. Indeed the only potentially distracting noise is the clicking of the hard drive read/write heads as they flick back and forth across the disc surface. 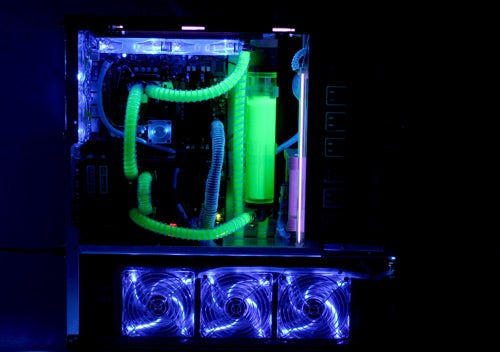 Speaking of hard drives, this computer has the fastest boot time I’ve ever seen in a consumer product. An optimised BIOS skips any unnecessary checks and pauses and gets straight to the job of loading up Windows and, with two of the fastest SATA hard drives on the planet configured in RAID-0, it flies through this task as well. Using a stop watch, I timed it at just over a minute to boot from cold. 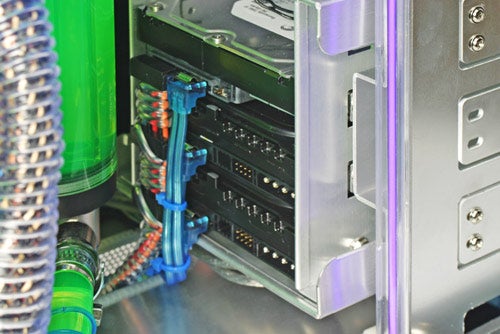 You can choose from the full range of Windows XP and Vista variations for your operating system but, given the hardware this Goliath is loaded up with, I wouldn’t go for anything less than Vista Home Premium which is what our review sample shipped with. Upon boot up you’ll see a custom Vadim desktop image that goes perfectly with the shiny windows and menus of Vista Aero. All the drivers and other software required to operate the computer’s hardware comes pre-installed but aside from that you’ll have to provide all the software you want to use. Again, if you’re the kind of user that might expect and hope to find your PC crammed full of anti-thisthatandtheother software then Vadim isn’t for you. In the eyes of the performance user these additions just add clutter to your PC and take up valuable system resources.

From this point onwards the Vadim is in your hands and you’re free to let it loose on your games and applications of choice. Of course, our particular choice was our usual suite of benchmarks, which I’m sure you’re all familiar with by now.


First I ran our automated timedemos of Prey, Call Of Duty 2, and Counter-Strike: Source at resolutions of 1,280 x 1,024, 1,600 x 1,200, 1,920 x 1,200. Each resolution is run with no AA or AF, 2xAA and 4xAF, and finally 4xAA and 8xAF. Then I manually ran through the Company Of Heroes demo at the same resolutions with both AA on and off. All games are run with maximum in game detail settings. Because of continued instability issues with ATIs DirectX 10 drivers I didn’t run either the Lost Planet or Call of Juarez demos as results wouldn’t have been comparable. 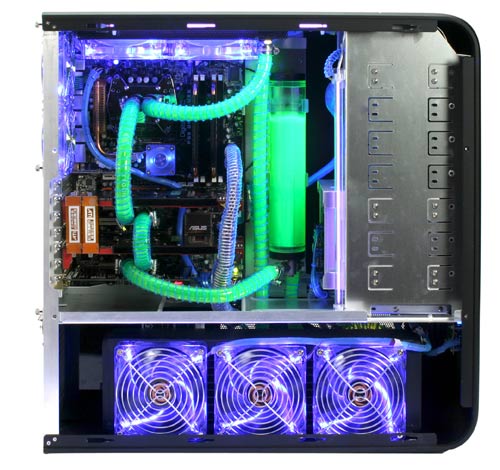 For comparison I used our usual test bed which consists of an Intel 975XBX2 “Bad Axe” motherboard loaded with an Intel Core 2 Duo QX6800 quad core CPU coupled with 2GB of Corsair CMX1024-6400C3 running at 800MHz with latency settings of 3-4-3-9. The hard drive is a 400GB Seagate Barracuda. We also threw in a couple of Radeon HD 2900 XTs for good measure.


Performance was unsurprisingly outstanding and none of our tested settings proved too much for the Vadim. Call of Duty 2 continues to be a thorn in ATIs side when compared to nVidia’s flagship 8800 GTX but, when you’re dealing with the kind of framerates we’re seeing with this system, it’s not really of concern. Overclocking also seemed to have a very minor affect in this game though the Vadim was consistently a few frames per second faster at every setting. All the other games showed the kind of performance you would expect from a machine of this calibre and I’ve no doubt you won’t be disappointed running any currently available game on this system. 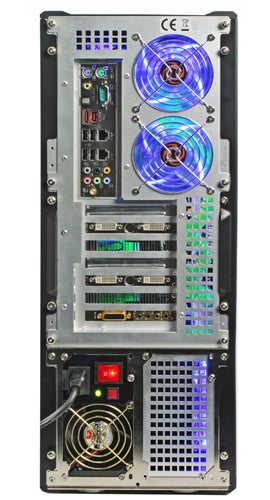 Next I fired up our 2D tests which consist of automating some everyday tasks in a single and multi-tasking environment and timing how long they take to complete, you can find a full explanation of each task here. All these tests give the entire system a thorough work out, particularly testing memory bandwidth, processor speed, and hard disk speed (both random access and sustained read/write speeds).


Unsurprisingly the Vadim wipes the floor with our test bed with the overclocked CPU and dual Raptor hard drives really proving their worth. The graphs really speak for themselves with the Vadim averaging over twenty percent faster than our test bed.


All in all the Vadim Custom Fusion LQX is a true colossus of the computing world. We simply haven’t seen another system builder that can deliver PCs with the kind of performance, style and class of Vadims desktops. Yes, they cost a lot but so does every other luxury item on your wish list. If you can afford it, go for it.