What are the V-Moda Forza Metallo Wireless?

The V-Moda Forza Metallo Wireless are wireless headphones that are more stylish than most. A little like the Sennheiser Momentum In-ear Wireless, they’re earphones for whom Bluetooth alone isn’t enough, since they need a pair to wear while running or in the gym.

They are also some of the best-sounding earphones of this type that I’ve used, without an extortionate price to turn you off. Audio geeks should be happier with the V-Moda Forza Metallo Wireless than most of its rivals.

The one issue is that wireless performance isn’t on a par with the best. 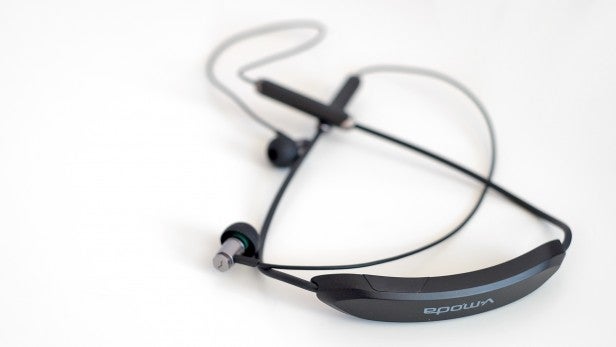 Most wireless earphones sport plastic earpieces, mainly to minimise weight. The V-Moda Forza Metallo Wireless have tough aluminium earpieces, although since they’re so small, the extra weight isn’t much of an issue.

These small metal bullets attach to a flexible neckband using standard earphone cabling. The design is very similar to the Sennheiser Momentum In-ear Wireless. And like that pair, not every part of the design is flawless; the little earpiece cables tend to sort of loop in front of you. It’s innate, though, since there needs to be enough slack to let you rotate your head without snags. 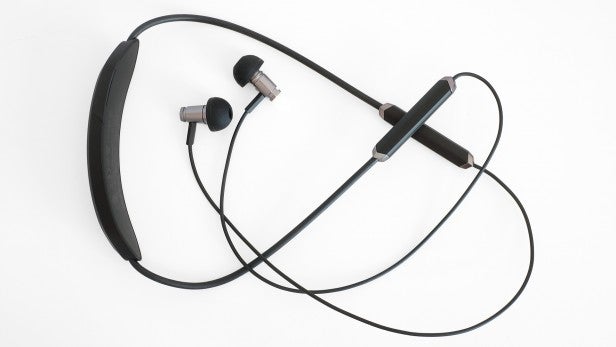 I’m mostly using the V-Moda Forza Metallo Wireless for listening as I walk about. Used in this way, there’s no issue with the fit or comfort. For vigorous exercise you might want to use the supplied ear hooks, however. These pop onto the earpieces to anchor them in place in your ears more firmly. 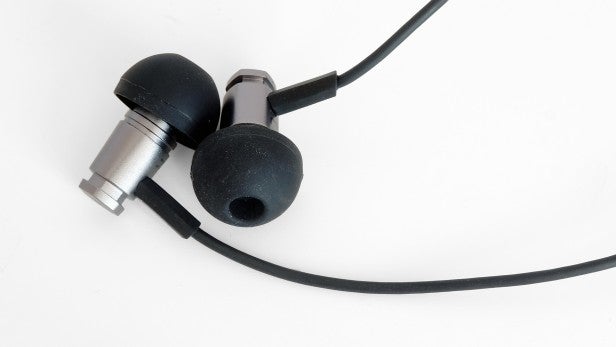 The V-Moda Forza Metallo Wireless didn’t initially strike me as sports earphones, mainly due to their more design-led styling, but they certainly have the specs for it. While there’s no official IP water-resistance certification, V-Moda says the earphones have been tested for sweat, UV and temperature resistance. Like IP-rated water-resistant phones, these earphones have a nano coating to help repel liquid.

Other features are plentiful, too. You get aptX support, fast charging (two hours’ use from a 15-minute charge), dual microphones for clearer calls and a vibration motor in the neckband that buzzes when you receive a call.

Battery life is also very good in this class at up to 10 hours, although I did find that at high volumes the real-life stamina is lesser. The one missing feature is NFC. 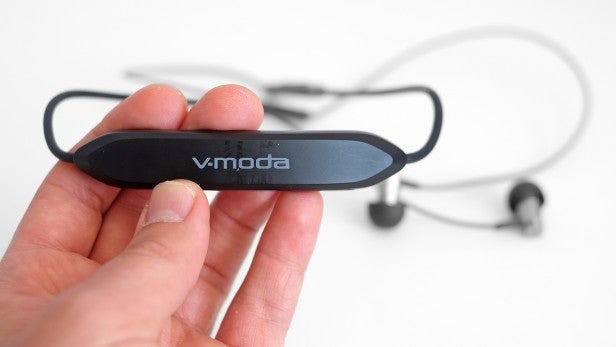 You control the V-Moda Forza Metallo Wireless using the buttons that are built into the very ends of each side of the neckband. As usual, you can change the volume, switch tracks and play/pause.

One of the nice little surprises of these earphones is that their isolation is remarkably good. At one point I took a trip on London Underground’s Northern Line, famously noisy and generally unpleasant, and the V-Moda Forza Metallo Wireless shrugged it off. No volume boost needed at all. 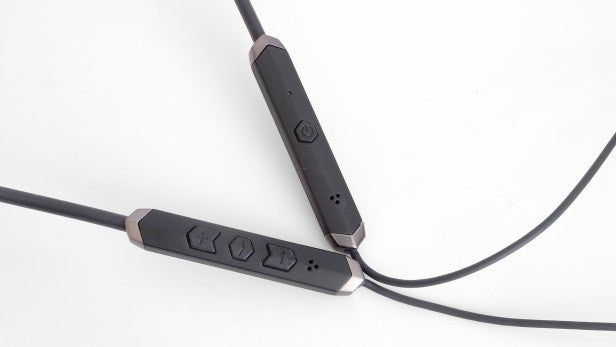 If there’s one part of the V-Moda Forza Metallo Wireless I’m slightly disappointed by, it’s the wireless reliability. Recently, higher-end Bluetooth headphones and earphones have started to offer almost perfect signal, with virtually no blips at all until you start taking them to the edge of their range.

The V-Moda Forza Metallo Wireless are closer to the wireless pairs of a year or two ago. They seem a little susceptible to momentary cut-outs when you move about too much.

I’m not going to mark these headphones down too much for this, since it’s still just an occasional occurrence and may vary depending on the phone used. However, the V-Moda Forza Metallo Wireless clearly aren’t as rock-solid as the best from Sony or Beats. 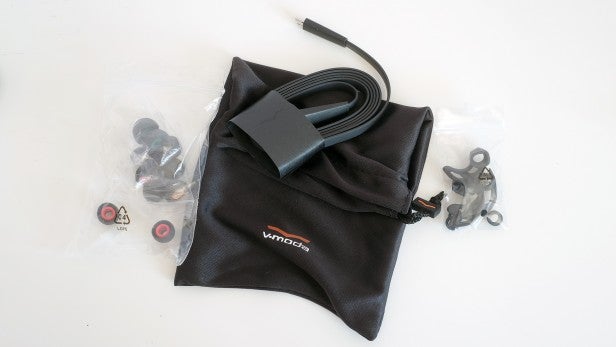 The sound makes up for the Bluetooth performance. These are among the best-sounding neckband headphones I’ve heard.

While a decent driver doesn’t guarantee good sound, there seems to be something special about the 5.8mm dynamic drivers V-Moda uses here. Clarity of the treble and upper mids is excellent, offering a terrific impression of detail without the off-putting harshness or granularity that can affect earphones deliberately aiming for an obviously detailed sound. 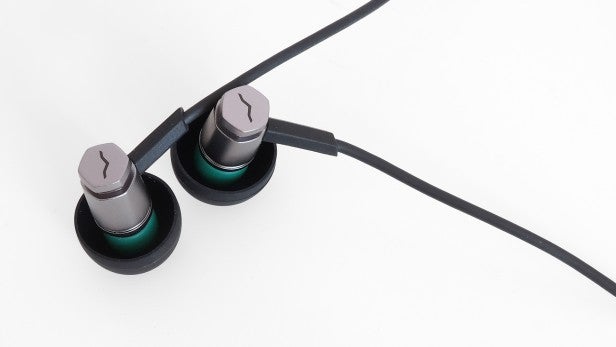 Crunchy guitars such as those of Placebo’s ’36 Degrees’ sound fantastic through the V-Moda Forza Metallo Wireless.

Bass quality is excellent, too. It’s well integrated, powerful considering the tiny diameter of the driver, and it isn’t overblown, stepping on the higher registers. 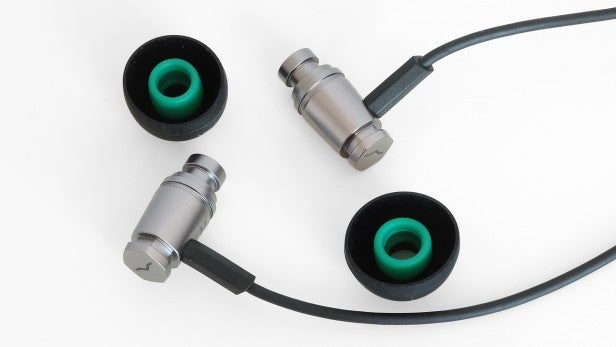 Compared to the Sennehsier Momentum In-Ear Wireless, the V-Moda Forza Metallo Wireless have a smaller soundstage and don’t have the same luxurious, thick richness. The mids aren’t beefy and filled out, which may put off some.

However, they pull off some real tricks with their soundstage since there’s a lot of spatial information put across. As I’ve heard in previous micro-driver models, these earphones really let you pick apart arrangements with your ears.

The V-Moda Forza Metallo Wireless are wireless earphones even audio snobs will appreciate. 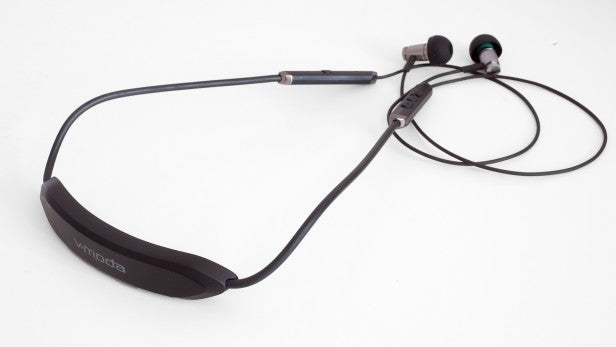 Should I buy the V-Moda Forza Metallo Wireless?

The V-Moda Forza Metallo Wireless are some of the best wireless earphones around, offering smart looks, a practical design and great sound.

A slight letdown is only ‘okay’ Bluetooth performance, with more blips than the best at this point. And even though I didn’t find this intrusive or annoying, now that some pairs are almost flawless in their wireless, the V-Moda Forza Metallo Wireless will stand out.

Aside from this, however, they’re easy to recommend.

Some of the best-sounding wireless earphones you can buy, although wireless performance isn’t perfect.