USRobotics (USR) clearly moves at a more sedate pace to the rest of the world as it’s only now decided to deliver a 802.11n wireless router. Furthermore, the new Wireless Ndx Router is only draft 1.0 compliant, whereas vendors such as Netgear and Linksys have already brought 2.0 compliant products to market. As our very own Gordon Kelly reported back in May, the newer products will work with each other regardless of brand, as they have to be certified. Some 1.0 compliant products will be firmware upgradeable but USR has given no indication yet as to whether its Ndx routers will be amongst these.


And so to the router itself, which is an unassuming slab of silver/grey plastic with three removable aerials at the rear. Alas, Gigabit Ethernet isn’t on the menu as you get a standard quartet of switched Fast Ethernet ports which could cause a potential bottleneck between high-speed wireless clients and LAN systems. The RJ-45 WAN port means you’ll need a cable or ADSL broadband modem with a suitable connection but USR does offer a version with an integral ADSL2/2+ modem. The routers all have a single USB port at the rear, which is only for sharing a printer over the network. 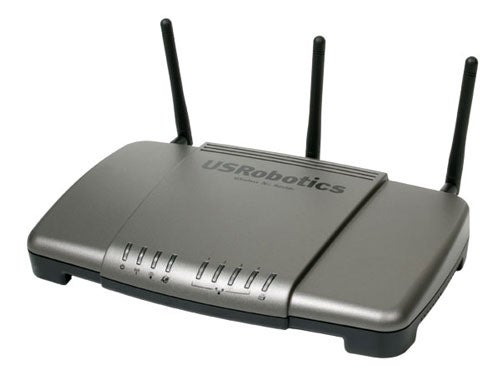 USR handles installation nicely as on first contact with the router’s web interface you get a quick start wizard to help with initial configuration. As we were using an intelligent ADSL modem there was literally nothing for us to do as the router spotted that an Internet connection was ready and waiting. Next, you get acquainted with USR’s SecureEasySetup feature, which aims to make light work of wireless security configuration. Just press the SecureEasySetup button at the back of the router and it’ll automatically create a network name, set up WPA2 and WPA encryption and sort out a suitable passphrase.


This feature comes into its own when setting up your wireless clients. To test this we installed USR’s Ndx PC Card in a 1.6GHz Fujitsu Siemens notebook with Windows XP SP2 loaded. After loading the drivers the routine requests that you press the SecureEasySetup button on the router after which it will negotiate a secure connection. This is very similar to Buffalo’s AOSS (AirStation One-touch Secure System) and just as easy to use as it created a connection in a matter of seconds. The only problem is that it displays the passphrase it has discovered in plain text for all to see.


USR clearly hasn’t spent any time on design for the router’s web interface as it’s the most boring of all. However, it does provide easy access to all functions and opens with a handy status screen showing the status of wired and wireless connections. Make sure you secure the interface as again, it displays the encryption passphrase and administrative password in plain text.

The router is very neighbour friendly as the wireless access point will only bond both 20MHz channels if no adjacent wireless networks are within range. We had two other access points operating in our area and the router refused to use more than one channel to avoid interfering with them. There is no way of overriding this so we were limited to a theoretical top wireless speed of 130Mbps although this is purely academic as we’ve yet to see any 802.11n routers get even remotely close to this.


To test real world performance we copied a 690MB video file from the laptop to a Supermicro Pentium D 3.2GHz PC on the LAN which took 123 seconds for a rate of nearly 45Mbps. Well short of the claimed speeds but on a par with routers such as D-Link’s DIR-655 and TRENDnet’s TEW-621. However, the router didn’t cope at all well with extended range as speed dropped dramatically when we moved the laptop to the floor below. With three brick walls in the way signal strength fell below 50 per cent and the test file now took 527 seconds to copy from the laptop for a distinctly unimpressive average of 10.5Mbps. 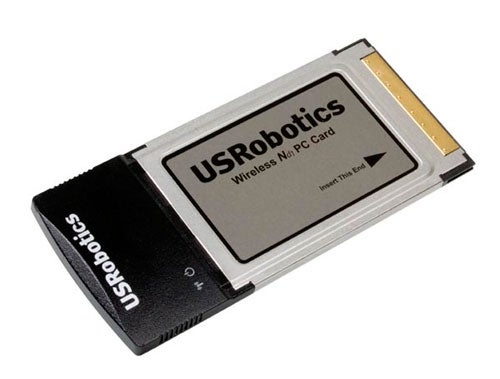 USR provides basic access controls as you can create lists of IP addresses and block them from selected port ranges. You could, for example, implement simple parental controls by only allowing Internet access for selected systems during a daily time period of your choosing. Port triggering and forwarding can also be applied to selected port ranges and you can put one IP address in a DMZ enabling it to sidestep the firewall. Printer sharing is simple enough as we connected an Epson Stylus Photo 950 printer to the router whereupon the web interface showed the location assigned to it. We had no problems installing and using the network printer but, as is always the case, the ink monitoring tools no longer functioned.


If you want a basic wireless broadband router that’s very simple to set up then the Wireless Ndx Router is worth a closer look. However, if features and better wireless range are on your shopping list, check out the 802.11n routers from D-Link, Netgear, and SMC as they offer a lot more for a very similar price.

”’(centre)First contact with the router’s web interface fires up a quick start wizard.(/centre)”’

”’(centre)USR goes for a minimalist interface design which shows the encryption password in clear text.(/centre)”’

”’(centre)SecureEasySetup makes light work of wireless client connection but also shows the passphrase in the clear.(/centre)”’

”’(centre)USR’s right neighbourly as it won’t channel bond if other access points are in the same area.(/centre)”’