The Urbanista Paris earbuds wrap true wireless audio and colourful style into a neat package for an affordable price. They tick all the right boxes for those looking for a cheap pair of earbuds for everyday activities.

The Urbanista Paris headphones are the joint-second most expensive earbuds in Scandinavian brand’s true wireless range, offering features above the popular Stockholm earbuds.

For £10 more, these headphones offer 25% more playtime and a better seal than the Stockholm buds, positioning them as a compelling choice for those in busy cities or looking for a bit of peace and quiet in the office.

With Bluetooth 5.0, voice assistant support and touch controls for less at under £100, this AirPods facsimile is a tempting offer – but does the performance live up to its style?

The fitted tip sits snugly in the ear, producing the sensation that they’ll stay put while the long tail gives them the air of the AirPods. The plastic construction is lightweight, which prevents the headphones from weighing on your earlobe. 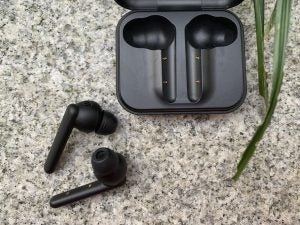 The lightweight feel and fitted tips lend themselves to sports. The earbuds feel fine when used on a run, despite the absence of wingtips. It’s also worth noting there are small, medium and large options to replace the rubber tips, so there’s a good chance you’ll find your perfect fit.

The IPX5 water resistance rating is also positive news for active wearers – users can workout safe in the knowledge the Paris can withstand sweaty ears and rain.

As for touch controls, they’re located at the top of the earbud where the main enclosure and tail intersect. It’s the perfect spot to house the touch controls as if they were located on the tail, tapping too hard there would knock the earbuds out of place.

The touch controls are simple and intuitive to use. Tap twice on the left bud to play music and twice more to pause. Tapping once on either earbud allows for adjustment of the volume, while pressing and holding for two seconds on either earbud skips forward or replays a track. To answer or end a call, tap twice on either side, or to reject a call tap and hold. 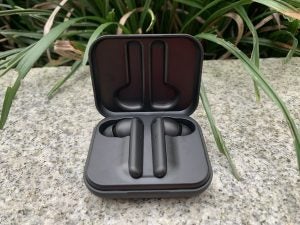 A double tap on the right earbud awakens your voice assistant. The Paris earbuds are compatible with Siri and Google Assistant, so you can ask questions, skip tracks and make calls hands-free on iOS and Android smartphones.

As far as battery is concerned, the earbuds have a fairly standard battery life. Users can expect a steady five hours of music from a one-and-a-half-hour charge, a playtime that should suit most day-to-day commutes before a recharge.

That said, the battery gets an excellent boost from the charging case. The case holds three additional charges, multiplying the standard playtime by four. With 20 hours in total, it’s possible to go a few days without needing to charge the case.

That’s a 25% increase over Urbanista’s Stockholm earbuds, and at £10 more than the Stockholms, the Paris’ battery life feel like better value for money. 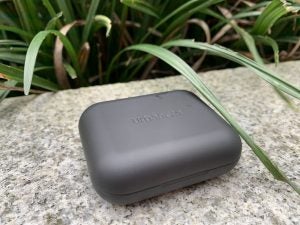 The charging case is compact and slim, slipping into pockets smoothly.

This case can also be charged wirelessly, which is no small feat for a £100 pair of true wireless headphones. Bear in mind Apple charges a £40 premium for this feature with its updated AirPods, which have an RRP twice as much as Paris do.

One slight letdown with these earbuds lies in the seal they offer. While the silicone tips help to guard the listener from noisy environments, the level of noise isolation pales compared to some of its competitors. The OnePlus Bullets Wireless 2, while not true wireless, are excellent at blotting out sounds for a very similar price.

That said, the levels of noise isolation they produce is an excellent bonus in more moderate environments; with the ability to muffle voices and deflect quieter sounds with ease.

Like some other budget true wireless earbuds, the Urbanista Paris skew toward favouring bass. However, the bass is defined and rich in detail. Muse’s Hysteria has thrilling bass extension, with each note appropriately deft and discernible from the last. 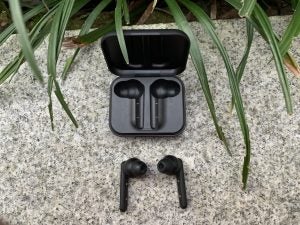 Unfortunately, the same definition doesn’t lend itself to the midrange and treble. The higher tones feel somewhat overcrowded and lacking in detail, taking away from some dynamism in the track.

Nevertheless, the earbuds are able to deliver some swooping dynamics. John Martyn’s Small Hours ebbs and flows beautifully, giving each note room to breathe, while the soundstage feels wide open and natural.

Should you buy the Urbanista Paris?

The Urbanista Paris headphones are a great choice for anyone looking for an affordable true wireless listening experience.

While the tonal balance might feel a bit off-kilter for the audiophile, the Paris are a good choice for your everyday user. They tick all the right boxes for day-to-day use, from the lightweight body and chic minimalist style; to intuitive touch controls and decent seal.

At less than £100, the Paris earbuds offer a package in line with Urbanista’s previous efforts and for most listeners, they won’t disappoint.