Out on October 13 for PS4 with PlayStation VR

I hate Until Dawn: Rush of Blood. Well, I don’t; it’s a very good VR on-rails shooter. But it’s terrible for my poor ticker. It’s also caused me to be slapped by my fiancée for yelling the C-word in the house. What my loving partner couldn’t see was that the girl from The Ring was screaming in my face and this nightmare rollercoaster ride had just become one of the most terrifying things I’ve ever played.

Sure, maybe Rush of Blood leans a little too heavily on cheap jump scares, but overall it’s a solid launch title for the PlayStation VR.

Before I continue this review, I should point out that I’m terrible with horror. I don’t like it, I don’t want it, my chest can’t take it. Jump scares are the worst, so Rush of Blood has been my Kryptonite among the PSVR launch games. Even the opening cutscene is absolutely terrifying. I’m sat on a slow-moving rollercoaster cart, with rooms on either side. Horrors lurk within every doorway, and then something jumps out of one of them to welcome me to the actual theme park – and it gets me every time. I’ve become such a wreck that I now take the headset off until the video is finished.

Until Dawn: Rush of Blood is very loosely set within the world of last year’s excellent Until Dawn. Using either Move Controllers or the PS4’s DualShock 4 pad, you experience a nightmarish thrill ride in which you must shoot your way to survival as all manner of things try to kill you. 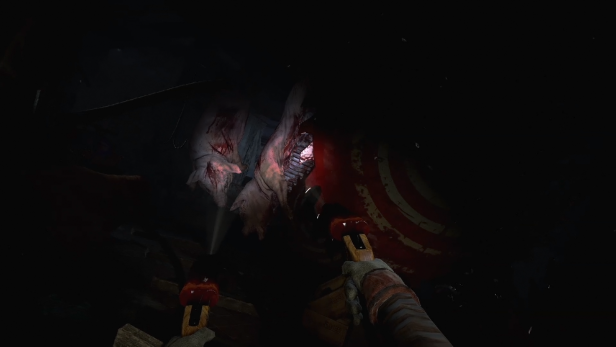 I set off on what first seems like a very pleasant ride – albeit guided by an incredibly creepy carnie – using dual pea-shooters to shoot clay ducks, plates and other targets along the ride. I’m playing with the PlayStation Move controllers, which enables me to fire at two separate things at once. Suddenly the big, clown-masked baddie of Until Dawn changes the cart’s path and leads me into the world of Rush of Blood, where the scares really kick into gear.

Swapping pea-shooters for pistols – along the way you’ll also pick up revolvers, Uzis, shotguns and flare guns, all of which feel amazing to shoot – we’re now in for some fearful thrills. The developer, Supermassive, uses the pace of the coaster to help set up scares and shootouts. At times you’ll be moving at a blistering pace, and other times coming to a complete standstill. I preferred the shooting, of course, but sometimes the generic enemy types wore thin. Although they may look different, outside of each level’s big boss none of the regular enemies presented much of a challenge.

One level changed up the formula, however, swapping the men in clown masks for mannequins, and this was excellent, bringing back memories of the Xbox 360’s truly chilling Condemned. They also required more bullets to put down, creating really intense shootouts. 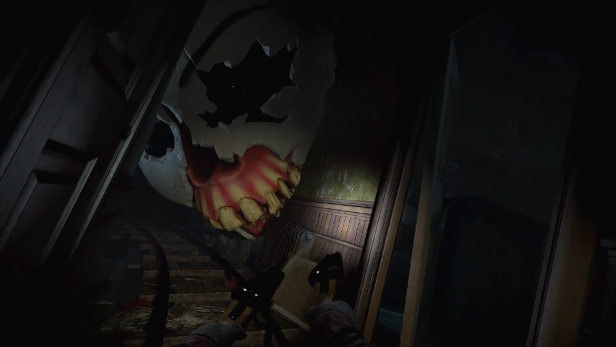 Another thing which marred the experience was random losses of accuracy. This isn’t because I’m a bad shot (honest!), but because the game simply lost track of the Move controllers. I resorted to keeping my hands firmly in the cart while aiming, elbows tucked in tight, instead of being full akimbo like Devil May Cry’s Dante. This seemed to alleviate the problem, though not entirely. When you shoot, the bullet is visible as it travels on its trajectory, but sometimes this wouldn’t happen, and enemies right in front of me would take no damage.

Horror in virtual reality has been a hot topic of discussion, and rightly so. Developers have a duty of care to ensure that players aren’t overwhelmed. Rush of Blood seems to flaunt this at times. Some moments it feels like the scares are cheap, without any build-up. At times the cart will slow to a stop, the lights in the room will switch off, and I’ll hear noises all around. I can no longer fire my guns, and am simply waiting for the scare to happen. The tension doesn’t ramp up because the scare is always the same – it’s a question of when, not if.

When I played Resident Evil in VR it was a scary experience, but not one that consistently used the same trick over and over. Rush of Blood’s consistent reach for the low-hanging fruit ends up becoming frustrating. It reached the point where I resented having to go back and finish it, knowing I was about to suffer. 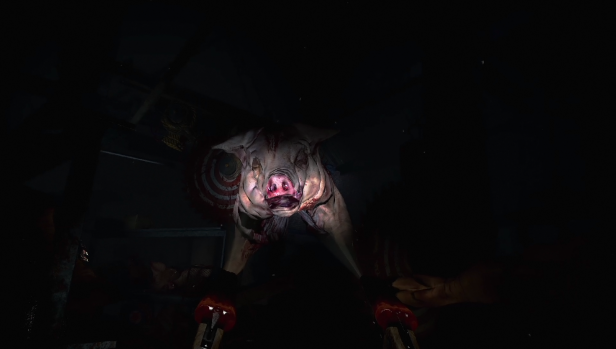 The game’s conclusion came as more of a relief than anything. Each level has its own unique boss, and naturally some will scare each individual more than others. For me it was halfway through Rush of Blood that it peaked, when it decided to include The Ring girl, who’s able to zip around at a frenetic pace before stopping right in front of the cart for a scream as she eats lead.

Until Dawn: Rush of Blood is a good on-rails virtual reality shooter. At times the scares can feel cheap, and the fact that it uses the same scare over and over again means you’ll either get bored or annoyed by it.

Changing bosses in each level is nice, but it doesn’t do enough to mask that the basic enemy types are repetitious and don’t provide much of a workout. The only challenge comes when the Move Controller tracking dips and the swarm of foes have a free run at my cart.

If you’re a fan of horror, and want a good shooter for your new PlayStation VR, go for this. However, if you hate jump scares, steer clear. You’ve been warned.