Two months and eleven days has never seemed so long. That’s the time those of us in Europe who didn’t want to import a US version of Unreal Tournament 3 for our lovely, shiny Sony consoles have had to wait for the game to launch here. The good news is that, having already dealt with one disappointment – that we didn’t get to spend our Christmas playing UT3 – we don’t have to bear any others. As you might remember from Hugo’s review, the PC version was fantastic. On the PS3, UT3 is fundamentally the same: a gorgeous looking, superbly designed, multiplayer-focused action title. 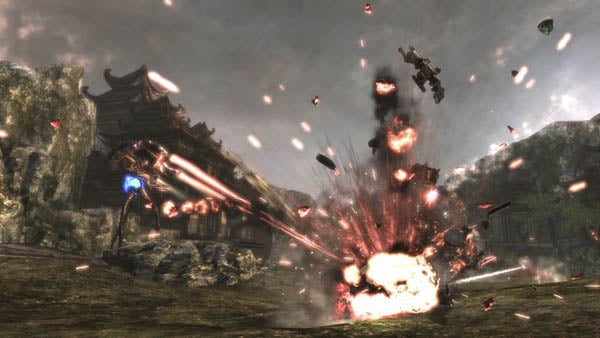 I won’t go too far in repeating what Hugo has already said. UT3 isn’t a vast, all-encompassing revamp of the classic series but a well-considered update, bringing the visuals up to the high standards we’ve come to expect from the Unreal 3 engine, slicing away some of the fat introduced in Unreal Tournament 2004 and grafting on new vehicles and game modes that expand the basic gameplay without changing it out of all recognition. 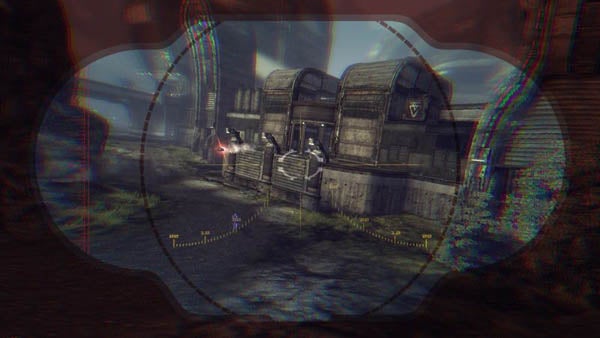 Arguably the biggest change, gameplay-wise, is the addition of the new Warfare game mode. We still have Deathmatch and Team Deathmatch for those who prefer simple, fast-paced fragging, plus Capture the Flag in both your standard dash, grab and sprint variety and a new format that adds vehicles to the mix. Epic has also thrown in a one-on-one, winner stays on Duel mode. Warfare, however, takes a more objective-based approach. Each team has a base with a reactor core. In between the bases lie one or more power nodes. Capture enough nodes to link your base to the enemies and you can then start blasting his reactor core to bits. Do so, and you’re on the winning team. At first – particularly on the larger maps – Warfare can be bewildering, though the mini-map and onscreen prompts certainly help. With time, however, you appreciate the way it adds a new ebb and flow to the classic UT gameplay, as teams attack and counter-attack the nodes, often using the handy power orbs which – if you’re fast, stealthy and smart – can be used to capture one instantaneously. 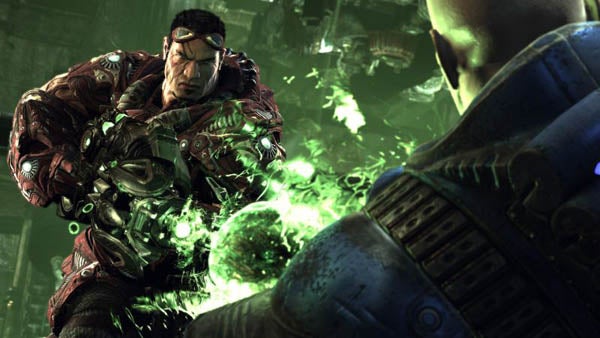 With the introduction of vehicles to UT2004 the maps took on a new scale, and here that process continues. Luckily, the game hasn’t abandoned its fragfest roots, packing in some maps clearly designed to facilitate high-impact eight-way brawls, others for more tactical sniper-rifle and rocket-launcher heavy games, and others still built with the larger team-based games in mind. Ingeniously, Epic has avoided the old Battlefield large-map problem – the fighting is going on a mile away but some git has nicked the last vehicle – by giving each player a hoverboard that can be equipped with a press of the square button.

The new vehicle selection shows that Epic has gone beyond merely ripping off the vehicles from Halo – by ripping off Spielberg’s War of the Worlds as well. Still, if the end result is as cool as the Necris Darkwalker – a spindly-legged tripod of death-ray wielding destruction – who’s complaining? Weapons, meanwhile, remain a key strength of the series. Whereas UT’s original rival, Quake, kept its weapon set down to a handful of strong, complementary archetypes, UT has always tried to give you variety and the chance to experiment. UT’s classics, like the flak-cannon, the rocket launcher and the shock rifle, have always delivered this; what they lack in punch in their main firing mode they make up for with the versatility of their secondary fire. It’s also nice to see old favourites like the Redeemer, the piston hammer and the (now dual-wieldable) Enforcer return. 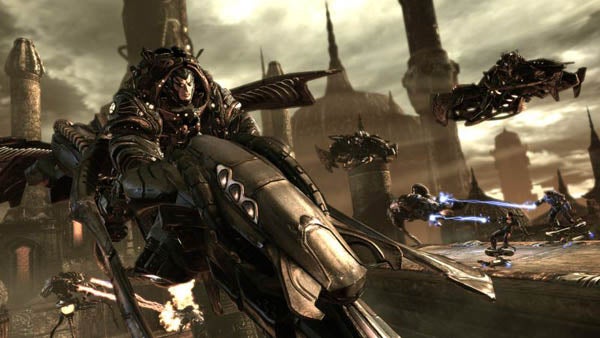 Hugo wasn’t particularly taken by the all-new single player campaign in the PC version of UT3, and not without reason. It’s a bold attempt to ditch the old alien tournament premise in favour of a Gears of War-style man vs man vs bloody nasty Necris struggle, but in effect what you’re getting is a series of bot matches taking you through the various game modes, and with some rather feeble attempts to explain why respawners and all the rest of the tournament gubbins have been thrown in. It’s more entertaining and varied than you might expect, but doesn’t turn the game into Gears of War. 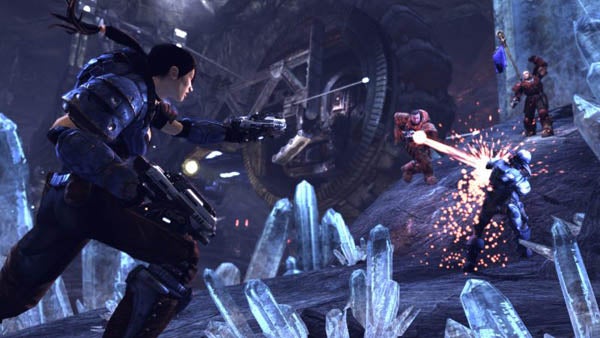 However, I’d argue that on the console formats this campaign plays a vital role. While a lot of the people who took up UT3 on the PC will already have graduated through UT, UT2003 and UT2004, there will be a lot of PS3 owners for whom this will be their first Tournament. With this in mind the campaign does a superb job of introducing the rules of Capture the Flag and Warfare, building the fundamental game skills and letting you familiarise yourself with the maps, the weapons and the vehicles. I also like the way in which the numbers and abilities of the bots ratchet up as the campaign progresses – you’re constantly getting a decent workout. If you’re not a hardcore FPS player and you go straight into the online UT3 battles, I’ll guarantee that you’ll be handed a can of well-shaken whup-ass. Take the time to work your way through at least some of the campaign and you’ll have a much better chance of dishing some out in return.

OK. By now I’m guessing that you have some idea of whether you like the sound of UT3. What you really want to know is how UT3 looks and handles on Sony’s console. The answer is rather well. Epic always promised that the Unreal 3 engine would sing on the PS3 hardware, and UT3 proves this to be the case. Sure, there’s a little texture pop-in from time to time, particularly when the system is dealing with a lot of texture information at once as it loads a level, but installing the game to the hard drive minimises this effect and it’s hardly off-putting anyway. The main thing is that a game that was dripping with rich textural detail and show-stopping shaders looks as good here as it does on anything but the most high-end PC, running smoothly and without a glitch at 720p whether you’re playing online or against fifteen bots. PC owners get higher resolutions and more graphics options to switch in and out, but if you’re playing UT3 on a large HD display you’re still more likely to be dazzled than disappointed. It’s a fantastic looking game. 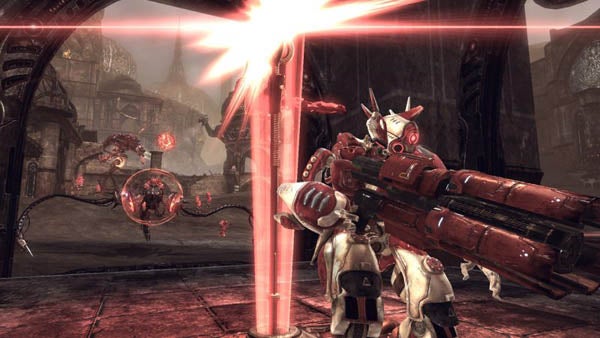 Of course, there’s one reason why you might want to play UT3 in front of a desktop monitor, and that’s the option to plug in a USB keyboard and mouse and move, aim and shoot using the classic FPS setup. I plugged in my Logitech setup and it worked perfectly, allowing for more rapid and precise aiming. Yet at the same time I wouldn’t necessarily say that it’s a huge improvement over playing with the Sixaxis controller. Personally, I’d say it’s a testament to how well Epic has implemented UT3 on the PS3, tweaking movement and rotation speeds so that at no point do you feel like you’re battling or working around the usual limitations of the Sixaxis. For once, the control feels solid, intuitive and precise. I suspect the hardcore UT3 fanatics will embrace keyboard and mouse in time, but at least the game provides options to block keyboard/mouse users from servers or filter out keyboard/mouse friendly servers when you’re trying to join a game. 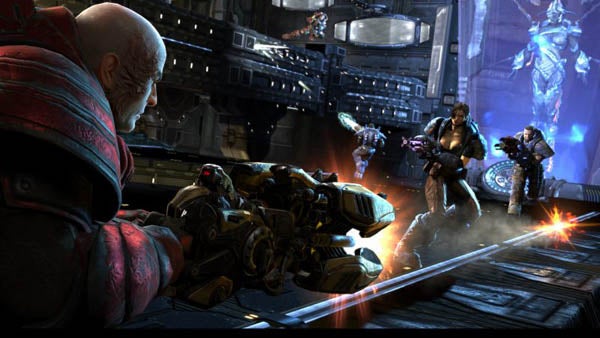 While we’re on that subject, Epic has made finding and connecting to servers pretty easy, with straightforward lists for each game mode, a quick match option and a decent set of filters. I have experienced some issues hooking up to US servers, but these should hopefully be resolved by the time you read this – or very soon after. Also, watch for servers with high ping rates – in UT3 this really does equate to an awful lot of lag. While I’m moaning, it is a bit of an annoyance having to cycle through the different game types to see who’s playing what – an overall list would be long, but it would be much appreciated. All the same, Epic has got this just about right for the console audience. Kudos too, for supporting Mutators within the PS3 game. It’s a bit of a shame that some kind of browser hasn’t been built into the main game – you’ll have to find and download specially ‘baked’ PS3 versions, get them on a USB memory stick and copy them over – but it does open a lot of user-created options that console owners haven’t previously been privy to.

Overall, this is a fine conversion of an excellent game – and one that deserves to thrive on a new platform and with a new audience. Is it worthy of the nine Hugo bestowed on the PC version? Well, yes and no. In some ways, the biggest gripe PC gamers had about UT3 was that it felt too much like the existing Unreal Tournament games, and I can sympathise. I can understand why long-term fans were disappointed by the decision to stick with two teams, not four and the maximum player count of 32 – now 16 in the PS3 version. When we’ve been spoilt by things like Call of Duty 4’s experience system and kill-cam, or Halo 3’s Forge mode and Replay Cinema, there’s a little disappointment that Unreal Tournament 3 hasn’t innovated more. And while the single-player campaign is a huge improvement on what we’ve seen in previous UT instalments, it’s still not totally convincing. 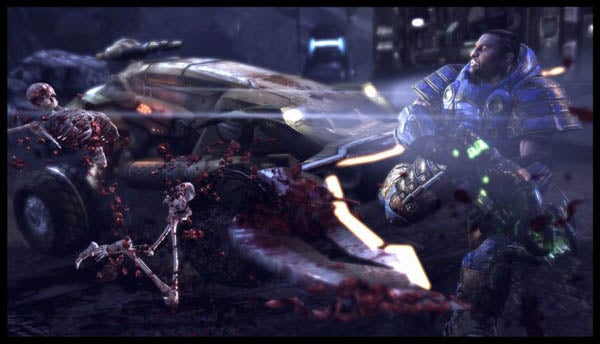 Yet at the same time I’m glad that Epic hasn’t reinvented the series and risked losing what makes it so special: Unreal Tournament was always the fastest, most furious and most immediately fun of the competitive online FPS games, and that still holds true of UT3 on PS3. With no Halo 3, no Gears of War, no Crysis and no really strong competition outside of Resistance and Call of Duty 3 and 4, UT3 is currently the most exhilarating and fully-featured online FPS on the platform. To my mind, that makes it the best full-priced PS3 action game since Uncharted. If you really don’t enjoy the whole competitive FPS experience, UT3 still won’t change your mind, but if you do then UT3 is plain essential.


The PS3 version of UT3 is every bit as good as it was on PC, and here the lack of strong competition makes it unmissable. If you like to fight online, this is as good as it gets on Sony’s system.