What is the Under Armour SpeedForm Gemini 2 Record?

The SpeedForm Gemini 2 Record look like any other running shoes, but what sets them apart is the clever sensor incorporated into their soles. When you want to go for a run, you don’t have to grab your smartphone or fitness tracker to record your efforts.

So if you find tracking your runs is a bit of a faff, this could well be your next set of footwear.

First off, be aware that there’s also a plain old SpeedForm Gemini 2 running shoe. The ‘Record’ in the name of the ones tested denotes that there’s actually a sensor built inside, so make sure you’re buying the right shoes before handing over your cash.

The standard SpeedForm Gemini 2 are also available in an array of different colours. Unlike most other running shoes out there, Under Armour’s smart running shoe is only available in one design and colour right now. The Gemini 2 Record comes in grey with red accents across the base of the sole, along the laces and on the Under Armour logo adorning the side of the shoes.

I’ll refrain from commenting too much on their visual appeal, but for me they look considerably more utilitarian than the likes of Nike’s Flyknit or Adidas’ Ultra Boost range, which have garnered some serious street and fashion kudos from non-fitness enthusiasts. 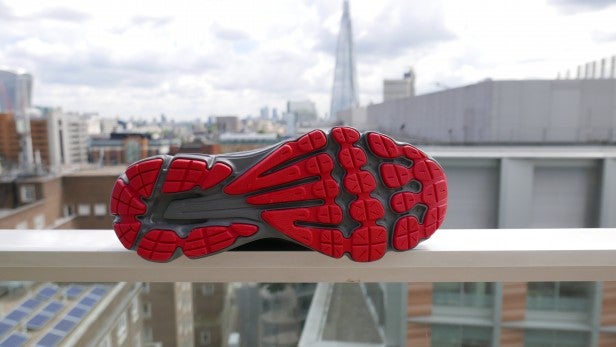 As for their actual running credentials, the SpeedForm Gemini 2 Record have a perforated textured finish that aids their breathability and the toe cap is moulded for added support. At 295g they’re relatively lightweight. As with all running shoes, it’s best to try before you buy, as everyone has different requirements when it comes to picking the right shoe based on your foot arch and gait. If you’re buying blind, as a bit of guidance on sizing, I wear a UK size 8 in both Nike and Adidas running shoes, and an Under Armour size 8 fit perfectly, too.

I typically run in relatively neutral running shoes, so the arch support felt a little more pronounced than I was used to, but I still didn’t experience any discomfort. The midsole uses dual-layering, which gives a little extra bounce and cushioning that felt less impacting to my joints during my test runs. The sole has a decent amount of flex for smoother heel-to-toe transitioning. 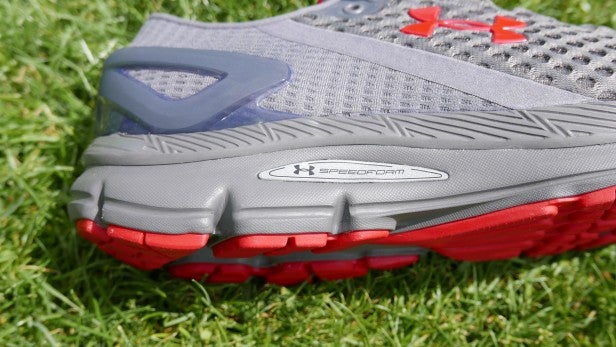 The SpeedForm Gemini 2 Record are a pretty standard affair on the surface. These are very much running shoes that look like running shoes. But it’s beneath the midsole that things get interesting. Inside the right shoe is a non-removable 3-axis motion sensor capable of tracking speed, stride length, distance, cadence and shoe life. There’s no GPS, so for those who want to be able to map their run, you’ll still need a separate GPS-enabled device, such as a fitness tracker or smartphone.

You pair the shoe with the UA MapMyRun app in order to sync any runs, and the pairing process is straightforward. You just shake the right shoe to wake the sensor up, as it turns off when not in use. After this, the app takes you through the process of pairing. I had to install a firmware update for the sensor, but this only took a few minutes. The concept of updating my shoe at least raised a smirk from the rest of the TrustedReviews team.

If you’re happy to not have an actual GPS-captured map of your run, the tracking process can’t really be any simpler. Just start running. If you reach a speed of at least 11 minutes per mile for more than three minutes, the sensor will begin logging a run automatically. Under Armour says it chose this specific pace so your quick jog to catch a bus isn’t logged.

It worked every time without a hitch. The sensor has built-in storage that can hold up to five workouts before you need to sync with the MapMyRun app. If you attempt to record a sixth workout, the oldest run will be overwritten. If you just want a way to log your runs, there’s not really anything simpler, as the sensor is always ready and waiting.

Many people will still want to carry their smartphones, so how convenient this aspect is will be dependent on your running style. I personally can’t run without music and I enjoy looking back on mapping data after a long run. 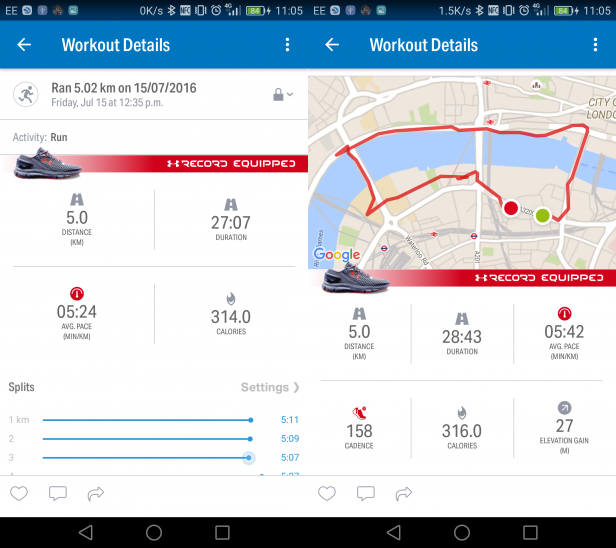 A run tracked with only the shoes on the left, tracked alongside MapMyRun on the right

Still, there are other benefits to using the MapMyRun app to manually start a run, too. It’s the only way you’ll get a cadence report, as this isn’t provided by the sensor alone. It will also help to calibrate the sensors inside the shoe, so that distance is correlated against the captured GPS data to make it more accurate the next time you do run without your smartphone.

I ran a lunchtime route I knew the distance of, as well as being alongside another runner equipped with GPS on their smartphone, and the distance result from the sensor alone was only around 50 metres off on a 5-kilometre run, which is very good.

Buying the SpeedForm Gemini 2 Record and pairing it with your MapMyRun account will also unlock a year’s subscription to MapMyRun MVP that provides added benefits such as mobile coaching, cadence analysis based on your shoe’s sensor, and various training plans. Even if these aren’t particularly enticing, MVP will at least remove the ads from inside the app. A subscription is normally worth $30 a year or $6 a month. 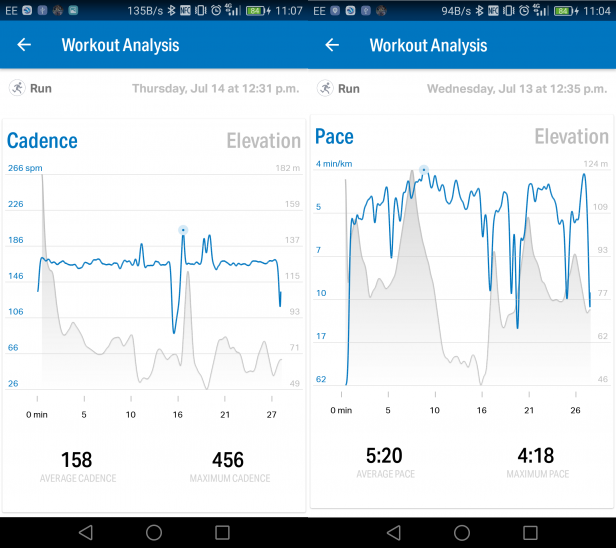 MapMyRun covers the usual metrics and detail you’d expect from a running app, and when used with the SpeedForm Gemini 2 Record it gives the ability to analyse each run with more detail. You get graphs displaying cadence, elevation and pace, and how these correlate with one another, which isn’t available in MapMyRun when you don’t run with the shoe connected.

The sealed-in sensor isn’t actually rechargeable. Instead, it’s rated for around three years or 400 miles. The latter is the recommended amount of mileage before you should replace your running shoes from most manufacturers, so it’s a logical choice here. It does mean that once the battery dies, the sensor is no longer functional. The running shoes, at least, will continue to function as running shoes, provided they’ve not taken too much of a beating. 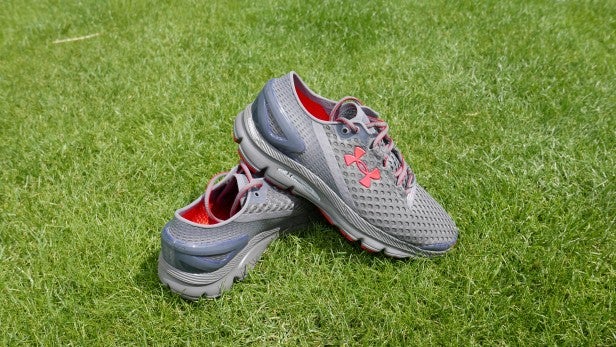 Some might see the finite shelf life of the shoes as a negative. But considering I’ve not stuck with any single pair of running shoes longer than three years, I personally find the lack of a rechargeable battery a welcome trade-off for not having to worry about charging. The MapMyRun app will also track the shoe’s mileage, so you’ll know when they’re in need of replacing, too.

Should I buy the Under Armour SpeedForm Gemini 2 Record?

If you’re specifically looking for a new pair of running shoes, it’s a little murkier. At £130 they’re certainly at the higher end of the running shoes price spectrum, competing with the likes of Brooks’ Adrenaline GTS 16, or Nike’s Flyknit Racer and Adidas’ Ultra Boost Uncaged, which arguably look more stylish. As always, comfort and suitability are dependent on the individual runner, however, so try before you buy.

Related: Which is the best Fitbit for you? 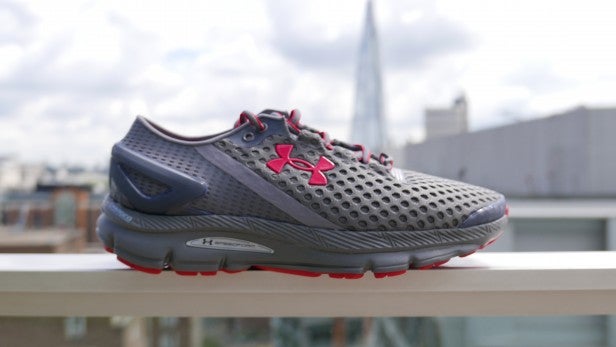 The SpeedForm Gemini 2 Record only partially deliver on the promise of an untethered experience. You can certainly just go running, safe in the knowledge that your run is being tracked, but you’ll still get the better user experience if you have a smartphone along with you, which negates some of its appeal.