Exclusive to PS4
Like last year’s Halo: The Master Chief Collection, this Uncharted compendium isn’t just a chance to squeeze more money out of a bunch of old games, but the equivalent of one of those multi-season TV Blu-ray box-sets. Uncharted: The Nathan Drake Collection is both a celebration for existing fans and a chance for those who’ve never played an Uncharted to catch-up with the series so far. It’s hard to imagine either group going away unhappy. Here we have three of the finest games of the last console generation, looking and playing even better than they did before.

The remastering team at Bluepoint has done a fantastic job here, upgrading key assets, reworking lighting engines, improving draw distances and persuading three ambitious games to run at a pretty solid 60fps frame rate at 1080p. These were fantastic looking games before, but, boy, do they polish up nicely. 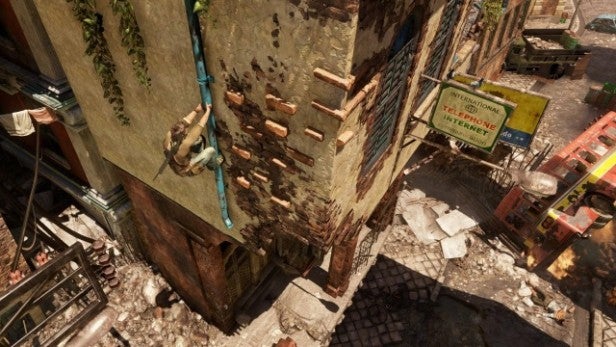 Check out the lavish texture detail on clothes and faces, the crisp presentation, the cinematic handling of light and colour. Take a good look at the background scenery, and at how more detail and a longer draw distance help make each location more convincing, and bind the game together as a whole. See how enhanced shadow and particle effects and optional motion blurs give each game an even more convincing, movie-like feel. This is the equal of The Coalition’s remastering work on Gears of War: Ultimate Edition or Naughty Dog’s own work on The Last of Us: Remastered. Sure, you’re occasionally reminded that you’re playing last-generation games, but not nearly as often as you might expect.

The first Uncharted, Drake’s Fortune, suffers most. The jungle scenery and crumbling ruins still look vibrant and dazzling, but neither the characters nor the locations have quite the same level of detail and complexity that they’re given in the later games. Both Among Thieves and Drake’s Deception are hugely impressive. By the time the second game came out, Naughty Dog had really learnt how to push the PS3’s quirky architecture, and the results, polished by Bluepoint, look even more gorgeous now. Reach the jungles of Borneo and the streets of Kathmandu, and the way Naughty Dog combines camera angles, textures, colours, light and shadow is frequently breathtaking, even by most next-gen standards. 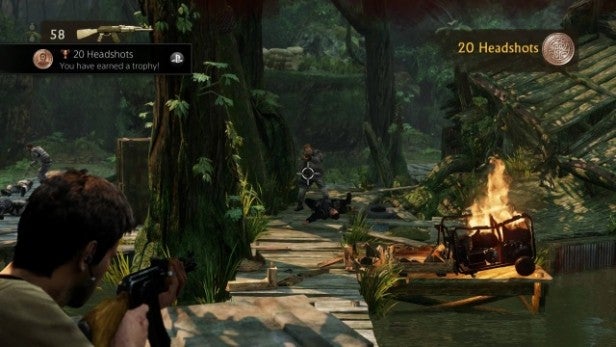 But how has does the gameplay hold up? Actually, even better than you might remember. By increasing the frame rate and tweaking the controls of the first Uncharted to match those of the latter games, Bluepoint has made Drake’s Tomb Raider-style acrobatics and third-person, cover-based combat even more fluid and exciting than it was on first release. In combat, the AI is reasonably smart and capable of surprising you with unpredictable moves, there are enough weapons to enable a range of tactics, while Naughty Dog has always been adept at setting up challenging encounters in interesting locations. While the hordes of identikit goons might lead to feelings of deja-vu, the Uncharted games are just too well-staged to feel repetitive.

The platforming stuff is just as brilliant. While Drake’s Fortune didn’t really introduce anything we hadn’t seen in Tomb Raider or Prince of Persia: Sands of Time before it, it’s very clever in using scenery and scale to make a fairly easy string of climbs, jumps and swings seem like the ultimate in derring-do. It’s rare to die as a result of a thoughtless camera angle, and Bluepoint has even taken the opportunity to remove the frustrating motion controls used for walking over logs and beams – a real bugbear in the original Uncharted. 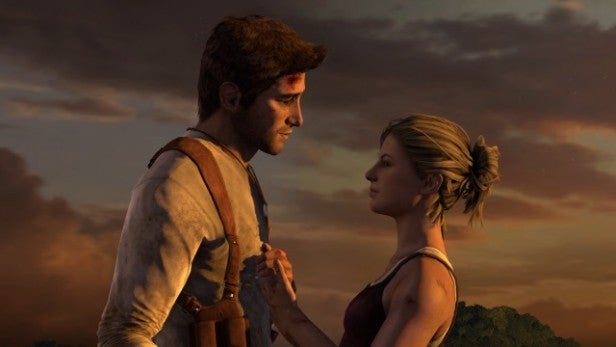 What holds it all together is Naughty Dog’s superb pacing and almost unmatched storytelling. While other games have caught onto Uncharted’s smartest trick – using almost constant, in-game dialogue to keep you engaged with the characters and the story – hardly anyone else does it this well. Not only does the series have one of the best casts in gaming, but the script is smart, funny and well-written, while the big dramatic moments pay off just like they should in a top blockbuster movie.

The regular, smooth transitions from platforming to action to cut-scene back to action add variety and give you room to breathe, and it never ceases to surprise me how caught up you can get in each individual game. At its best, Uncharted hits you with the perfect double whammy: satisfying gameplay and a tale that keeps you gripped.

The first game is again the weakest, with some sections that meander along between the series’ signature set-pieces, chases and firefights. Yet even this would be a standout in most other series, and it does a great job of setting up the characters and keeping you guessing. Key sections, like the Nazi submarine, the drowned city and the final descent into horror territory, are hard to forget. 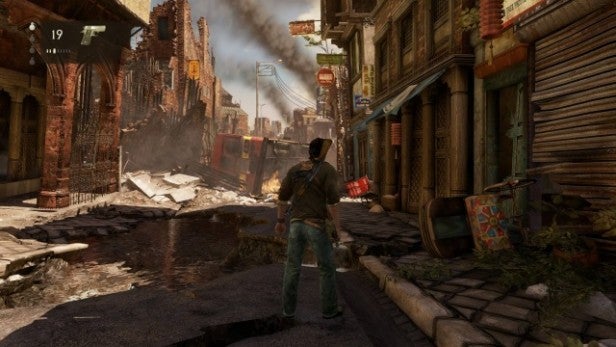 By Among Thieves you can see a new confidence in both the storytelling and the set pieces, as the narrative moves backwards and forwards in time with Naughty Dog setting new benchmarks for how big the big moments can go. Everyone remembers the opening train section, but playing it again you’re struck by the fantastic sequence with the helicopter and the Kathmandu hotel, or the following chunk around the hidden shrine. Sure, this is Uncharted paying homage to Indiana Jones and Tomb Raider, but no recent Tomb Raider has done this stuff so well.

Drake’s Deception gets a lot of stick for being a little too linear and upping the bombast, yet this too packs in scores of brilliant moments, ranging from the flashback sequence in Columbia to the French Chateau – which looks incredible with Bluepoint’s updates – the ship’s graveyard and the final city of the sands. It also houses some of the series’ best puzzles, particularly in the Yemen sections mid-way through. True, some of the gun battles feel over-extended, while some brawls wear out their welcome, but if the third Uncharted doesn’t quite maintain the same standard set by the second, it still reaches it on plenty of occasions. By any sensible standards, it’s an exceptional game. 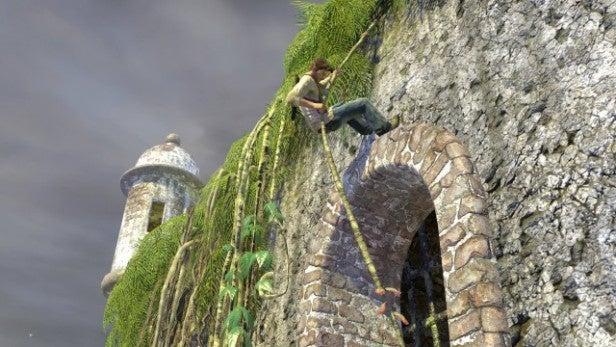 If you’re looking for the kind of additional scenes or bundled DLC content you’ll find in some PS4 remasters, you won’t find them here. Bar The Last of Us: Left Behind, Naughty Dog has never gone in for extensions to its adventures, so all we get is the three campaigns. There are new features, including a photo mode, a speed-run mode that tracks your times through the chapters, and a series of unlockable filters and skins. We also get new difficulty modes above and below the existing options, with an Explorer mode that makes combat easier, and a Brutal difficulty mode that’s even more crushing than Crushing mode – itself now available from the start. I hope you’ll excuse me if I shied away from that.

Some will be disappointed by the omission of the PS Vita’s spin off, Uncharted: Golden Abyss, while others will note that the multiplayer options of Uncharteds 2 and 3 have been left out. Given what there is here, however, it seems a little churlish to complain – and buyers will get access to the Uncharted 4 multiplayer beta this December.

If you played and loved the PS3 originals, then The Nathan Drake Collection makes a double-dip damn-near irresistible. If you haven’t, I actually envy you in the way I would someone watching Star Wars or Raiders of the Lost Ark for the first time. Boot your PS4 and install this compendium – you’re in for a treat.

Verdict
While it’s possible to be disappointed by the lack of new material, The Nathan Drake collection makes three of the PS3’s finest games one of the best things you can buy for PS4. Bluepoint’s upgrades drag the visuals straight into the next-gen era, while subtle improvements to the gameplay make the first Uncharted even stronger.

Whether you’ve played the games before or are taking a leap into uncharted territory, The Nathan Drake Collection is just too good to miss.