Uncharted: Drake’s Fortune was a hugely important game for the PlayStation 3. Up until its release there was little defence against those detractors of the console rightly pointing out the utter dearth of quality, exclusive games for the console. And then Uncharted came along. Oh, sure, it was derivative, but it’s hard to find fault in a game that derives from the likes of Prince of Persia, Tomb Raider and Gears of War while still feeling fresh. 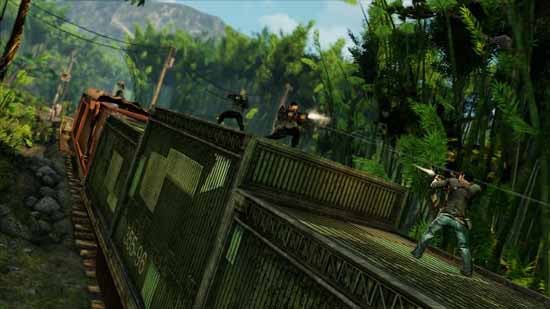 What Uncharted managed fantastically was immersing the player in an engrossingly cinematic experience. Aside from Metal Gear Solid 4, it’s hard to think of any game except Uncharted where you could use phrases such as “interactive movie” without sounding like an utter pillock, but that’s how Uncharted played. The story was engaging, the characters likewise, the visuals stunning and the production values simply stratospheric.


In creating Uncharted 2 its producer, Naughty Dog, hasn’t lost sight of what made Uncharted great. Instead, the few complaints have been addressed – there’s slightly less linearity this time around, a multiplayer mode has been added – and everything else polished to a high shine. The result is a truly fantastic game released, rather poignantly, just as the PlayStation 3 Slim has made its debut. Co-incidence? Maybe. Fortuitous? Definitely. 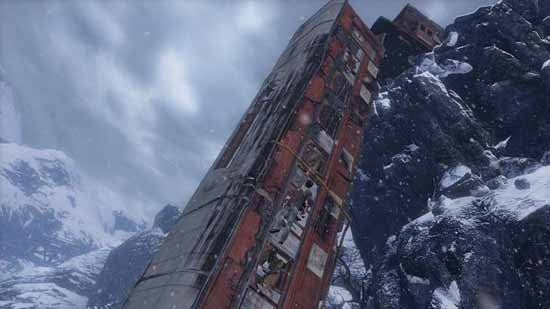 The key to the brilliance of Uncharted 2 is undoubtedly Naughty Dog’s impeccable narrative. It’s not just how involving the story behind the game is that’s impressive, it’s how that story plays out.


The plot is hardly complex, but it wouldn’t look out of place in a Hollywood film. It plays out like a blockbuster, too. Obviously you have your hero, Nathan Drake, defeating your stereotypically Russian villain, but there’s also betrayal, love and loss, suspense, drama, a bit more betrayal and yaks along the way.

The opening scene of the game dumps you straight into the action about half way through the tale, just long enough to be hooked on the action, before whisking you away to the beginning. As such, you end up with enough knowledge of what’s ahead to appreciate the gradual revelation of just how you’re going to end up there all the more. The details you don’t have are then drip fed to you slowly, giving you the incentive to press on with the constant mantra of: “just one more chapter and then I’ll go to bed, I promise.” 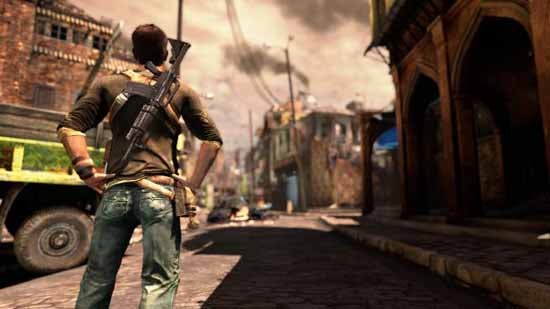 All of this is executed brilliantly, your attention grabbed onto vigorously at the offset and held onto continuously. It’s not often in a game you can relate to the characters or find them tolerable, let alone likeable but Uncharted 2 manages it. Fans of the cast of Drake’s Fortune will be pleased to see reprisals on this adventure, while the new participants are worthy of the franchise.


It’s not just it’s narrative that excels, though. Uncharted 2 has the visual presentation to match – it’s an undeniably pretty game. The proprietary engine might not have the technical prowess of that powering Crysis, but it so often produces such breathtakingly impressive visuals you’d hardly know it. The lighting is brilliant, the shadowing likewise and the camera framing – until you take control of it – seems to have been carefully tailored to show off Naughty Dog’s works. 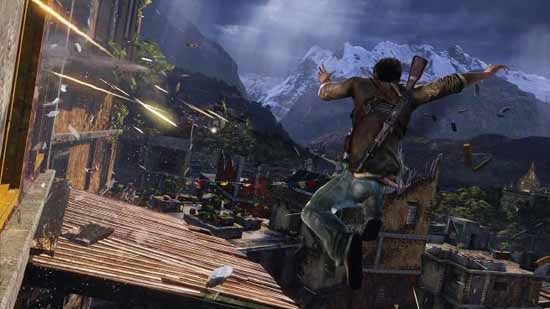 Importantly, even at those points when there’s an intimidating amount of action occurring on-screen the frame rate seems to hold steady. If Sony hasn’t convinced you of just how powerful a system the PlayStation 3 is already, Naughty Dog will make a believer of you.Those little touches that stood out in Uncharted are present again. It’s still just as brilliant to jump into a pool of water and emerge with Drake’s clothes dripping wet, or to roll in the snow and come up dusted with powder. The attention to detail is remarkable.


It’s in motion that Uncharted 2 really shines, though. Animation is fluid and realistic and in those sections when you can keep moving at a reasonable pace it’s commendably believable. The control system remains elegant in its simplicity. Whether you’re running and gunning, diving over a piece of cover or sliding in behind one, Drake’s movement is simple to dictate.

The one thorn in Nathan Drake’s side is the cover system. Every now and again, almost infrequently enough to trick you into thinking there’s no issue at all, Drake will decide that, actually, what you meant when you pressed circle, wasn’t to hide behind that crate. No, clearly you intended to dive into the loving embrace of that heavily armoured, shotgun-wielding enemy. Again. 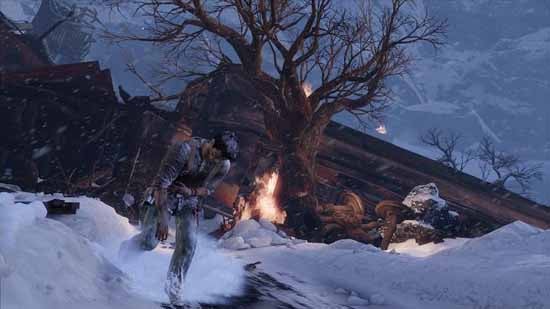 Such issues occur infrequently, thankfully, and a lot of the time you can avoid a good deal of combat anyway. Unlike Drake’s Fortune which, at least the way I played it, tended to offer you one solution to any given encounter, there are usually a good number of ways to tackle those in Among Thieves. If you’re really sneaky and don’t mind waiting for enemies to move into the position you need them in, whole chapters of the game can be completed without anyone being aware of your presence until it’s too late for them to do anything about it and they’re bidding a friendly “how do you do” to Mr Precipice and the Rocky-Outcrop family.


The sneak-’em-up elements of Uncharted 2 are assisted by Drake’s uncanny climbing prowess. You’re still no Altair and the various settings of the game still aren’t quite as full of conveniently placed handholds as Jerusalem (hello there, Assassins Creed reference), but look around and you’ll generally see a suspiciously convenient crack in that nearby cliff face, or a few jutting bricks to clamber up in order to find yourself suitably placed just below the legs of an unsuspecting grunt, soon to be pulled backwards to his – and it will be his (apparently henchwomen don’t exist) – grisly doom. 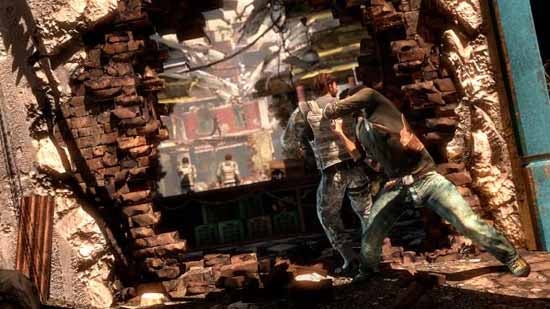 When stealth fails, which it inevitably will, and you’re forced to turn to your guns Uncharted 2 can be a brutal experience. You’re still limited to one pistol and one primary weapon, be that an RPG, a sniper rifle or a machine gun and four grenades. That’s all well and good, but when the same button which picks up additional ammo also changes the selected weapon you have a recipe for occasional frustration.


When it doesn’t hiccup, the cover system makes firefights an adrenaline pumping and engaging experience. If you get it wrong, though, you’ll die fairly easily. Stay in the same place and let the impressively adaptive AI flank your position and you’ll die. Decide that swearing at the game is a better solution than adapting your tactics and you’ll die a lot. However, get it right, and you’ll quickly find the right pattern of blind firing, controlled, tactically-directed bursts of bullets and melee charges to take down even the most intimidating of opposing forces.

All of the previously mentioned aspects come together perfectly in the game’s set pieces. I’m loathe to ruin these for anyone, but suffice to say there’s one bit involving a hotel and a helicopter and if you can stop yourself from squealing in delight at the sheer, cinematic brilliance of it you’re a stronger-willed individual than I. The game’s ending is an improvement over Uncharted, too, without the sense of anti-climax that haunted the first of Drake’s adventures. 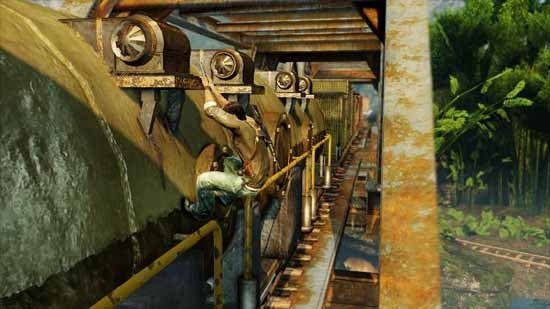 It’s these moments that, for me, define a truly great game. Those points where everything comes together just right; the visuals, the characters, the score – which is just flawless – and culminate to create an experience you’ll just have to talk about with your friends; “that bit where you… and the… wow, man, just wow.”


Even the multiplayer is better than could have been expected. It’s rare for a strong single player game to come paired with a decent multiplayer mode without offering something different, such as Horde mode in Gears of War 2, or Firefight in Halo 3: ODST. In fact, Halo 3 is probably the only exception, having as it does a massive multiplayer following. 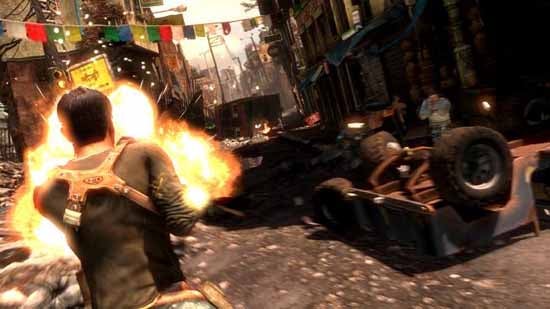 Uncharted 2 doesn’t exactly change that perception but its multiplayer game is still commendably good. Everything you would expect from an online rendition of the game is present. It will take the test of time to see whether there’s any longevity to it, but for now it’s not hard to jump online with Among Thieves and have a quick blast in what is definitely the best-looking, if not the best, multiplayer game on any console.


But it’s the single player game that really matters for Uncharted 2 and there it delivers better than anything else on the PlayStation 3.


Break Uncharted 2 down and there’s no obvious reason why it should succeed quite as well as it does. But when the components are themselves the ingredients of greatness you surely have a recipe for success. And the whole, as the cliche runs, is much, much greater than the sum of its parts.