I still stand by the belief that Resident Evil 4 is one of the greatest games of all time, shaping a generation of third-person action games with its mechanical and visual innovations. It was a phenomenal title, but also marked Resident Evil’s descent into the generic action copycat it is today. Umbrella Corps is, sadly, no return to form. It somehow worsens that tired shooter formula with nonsensical additions and yawnsome attempts to pay homage to the much better games that came before it.

Despite its evident mediocrity, Umbrella Corps leaves a surprisingly positive first impression. The general gunplay is fast and satisfying, with each weapon packing a substantial punch when tearing into the undead hordes. Unfortunately, this sense of satisfaction doesn’t last long, giving way to frustration at the archaic controls and irritating game design.

After putting a bunch of hours into the game’s single- and multiplayer portions, I found it all to be incredibly lacklustre, light in both polish and content. If Umbrella Corps is intended as Capcom’s foray into world of eSports, it’s landed flat on its decomposed face. 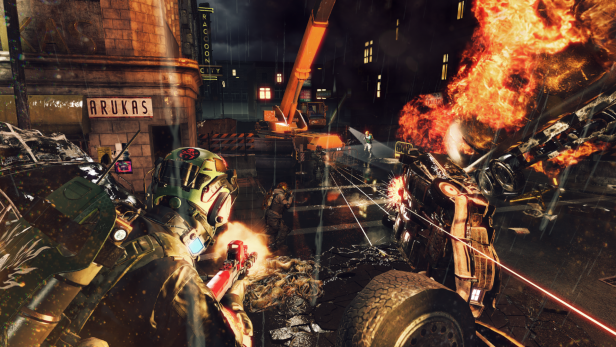 Resident Evil rose to fame in the 1990s thanks to its cheesy aesthetic and unsettling approach to survival horror. You felt vulnerable, lacking valuable ammo and resources as you stumbled about an abandoned mansion. The franchise began to leave behind this facet of isolation in recent years to focus on action-heavy shooting and bombastic set-pieces.

Umbrella Corps takes this concept and runs with it, applying the Resi template to an online shooter that simply doesn’t work. The game is played from a third-person perspective but with a press of L2/LT you shift into first-person, regardless of the weapon you’re holding. This is disorientating at first, twisting your vision in a way that feels unnatural. The already unwieldy controls are worsened by the completely asinine camera.

The camera is drawn in so stupidly close to the player that it’s impossible to predict where enemies are coming from. This feels unfair, making online and offline play a chore. Fortunately, the infected who wish to feast on you are so dumb that they’ll often fail to hit you, or plain forget you’re even there. For the majority of missions I spent my time crouching purely so the camera didn’t feel so claustrophobic. Such an unintuitive presentation is hindered further by a framerate that fluctuates constantly with screen tearing that becomes difficult to ignore.

The single-player portion of Umbrella Corps is an uninspired sequence of missions that immediately grow repetitive. Objectives range from dispatching a set number of enemies, to collecting briefcases or holding a certain point on the map. Every mission feels predictably samey, lined with a semblance of frustration that grows more prominent as you progress.

Related: Death Stranding – Everything we know 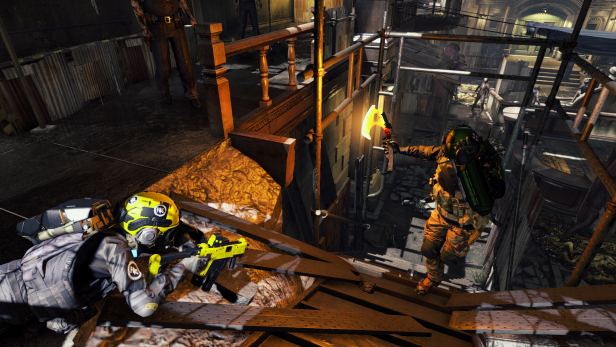 One positive worth throwing at the campaign is the variety of locations. Hardcore Resident Evil fans will immediately recognise the village from Resident Evil 4 and the Raccoon City Police Station from 2. It’s a cute element of fan service with some clear effort put into it. It’s just sad that the gameplay which surrounds it is so haphazardly mediocre.

The illusion of quality presented by these locations is diminished further by the horrid soundtrack of Umbrella Corps. It’s a jarring mixture of rotten dubstep and overblown rock. Kudos to Umbrella Corps for chasing the dudebro attitude of Call of Duty and Battlefield, but it’s a laughable attempt at trying to hang with the cool kids. I fell in love with past games in the franchise because of their kooky nature and foreboding atmosphere, but Capcom seems dead set on burying this vision of Resident Evil.

Umbrella Corps’ limited suite of multiplayer options is just as drab and predictable as everything else of display. There are only two modes, neither of which have the potential for any longevity. Both modes pit two teams of three against each other across a variety of maps. Online battlegrounds are littered with a menagerie of obstacles that I can only describe as urban vomit. Its an ugly, bloated mess that’s a pain to navigate. 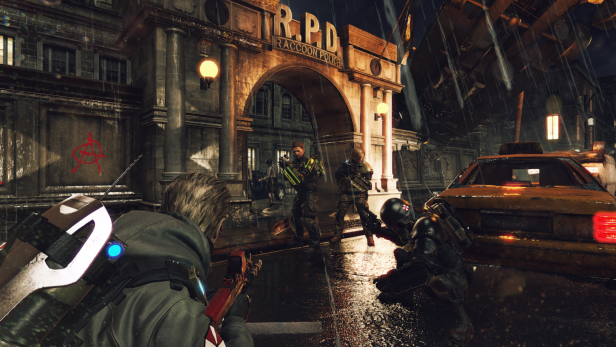 The first of the online modes is known as “Multi-Mission”, which features rapidly changing objectives between rounds. This shakes up the pace and tension of each skirmish, but alleviates any idea of consistent teamwork as you rush around in search of the enemy. I never felt like me or my allies were working together, despite the game’s insistence on tactical play. You start each round by selecting a strategy for your team, but there’s no reason to follow this. I won most of my matches by lobbing grenades across the map, knowing exactly where my enemies would spawn.

The final mode gives you only one life with no respawns. Its closest relative is probably Search and Destroy from Call of Duty. I’ll admit I felt a genuine feeling of tension as I crawled about the map searching for the enemy. It’s just a shame that it’s far easier to bombard your enemy with insta-kill melee attacks than apply any kind of meaningful strategy.

Funnily enough the most compelling element of Umbrella Corps’ online multiplayer is the customisation options, which are vast and plentiful for the most part. You can fully customise your soldier’s appearance with a selection of colours, attachments and emblems. The only negative about this aspect of the game is having to play more Umbrella Corps to unlock new equipment.

Umbrella Corps is a laughably broken mess, unworthy of the iconic franchise it inhabits. The small echoes of nostalgic beauty are negated by its repetitive gameplay, awful mechanics and complete lack of worthwhile content.