If there’s one thing that’s become apparent over the past few weeks, it’s that headphones are a very personal thing. Just judging by the TrustedReviews team, it would appear that we all look for different things in a set of headphones. That said, in my personal opinion, the Ultimate Ears super.fi Pros are the best in-ear headphones that I have ever had the pleasure of using.


The most impressive thing about the super.fi Pros is that they have converted me to using in-ear headphones, whereas before I always preferred traditional over the ear cans. Part of the reason that I love these headphones is that they just fit my ears perfectly – when I push the super.fi Pros into my ears they form a perfect seal with my ear canal, so much so that there’s an audible “pop” when I remove them. The result is that most of the ambient noise is blocked out once you’ve squeezed the super.fi Pros into your ear canals. You also get no less than five different pairs of ends for the headphones – there are three sizes of single flange silicone ends, a pair of dual flange silicone ends and a pair of foam pads. I found that the medium single flange silicone ends fitted my ears perfectly.

Interestingly, in the course of testing the super.fi Pros it became apparent that Benny’s ears are simply not designed for in-ear headphones. We tried every single size of end for the super.fi Pros and without fail the left side just fell out of his ear. I’m not sure exactly what is wrong with Benny’s ear canal on the left, but the upshot is that at least one of the TrustedReviews team will never be converted to in-ear headphones. It’s a shame really because Benny is missing out on a truly excellent sound experience.


Ultimate Ears is a company that knows a thing or two about sound quality, with its Studio Reference Monitors used by audio professionals around the globe. Although I’d love to own a pair of these, I think that they’re probably best described as overkill for my personal audio needs. Add to this the $900 price tag and it’s understandable that the Studio Reference Monitors are destined to remain an unattainable object of my desire. Thankfully Ultimate Ears has realised that there are many people like me who would like the best quality audio experience from their music player, without the need to sell their car in order to fund the project. The result is the super.fi range, which incorporates much of the technology seen in Ultimate Ears’ professional range, but at a somewhat more affordable price.

Before I even get to the sound quality, let me cover the design of the super.fi Pros. Unlike normal in-ear headphones, these don’t just push into your ear with the cable hanging straight down – instead you insert each headphone in what looks like an upside down orientation, the cable is then routed through a stiff, but flexible sheath which curves around the top of your ear. The result is a set of in-ear headphones that are not only incredibly comfortable, but that also have almost no chance of falling our – unless you’re Benny of course.


You’ll notice from the pictures that the super.fi Pros are larger than most in-ear headphones, but that’s because there’s more going on inside. There are actually two speakers inside the super.fi Pros, one for high range and the other for low. The upshot is that you get deep and full bass response without losing the clarity at the high-end. The result is nothing short of stunning, with the bass tones washing through your head but not at the expense of clarity; so much so that I was able to pick out delicate nuances in tracks that simply aren’t there with lesser headphones. 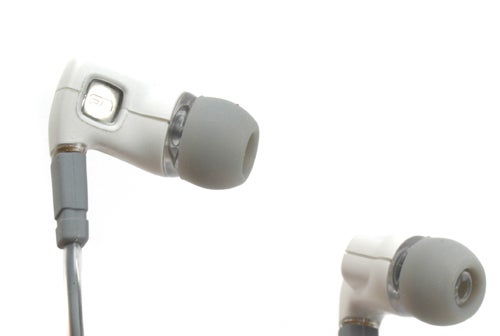 Obviously the super.fi Pros are designed to be used with an MP3 player and the white finish leaves no doubt which one – although they do ship in black as well. With that in mind I plugged the super.fi Pros into my 4th gen Apple iPod and was instantly blown away by what I heard – partly because I had left the volume very high from the previous headphones. The super.fi Pros are VERY loud, so please take my advice and make sure that your player is turned right down before trying them for the first time. Of course the manual warns you implicitly about this, but like any red blooded male, I didn’t bother to read the manual!


Listening to Angel by Massive Attack was a revelation – the heavy bass was everywhere, but I was still able to pick out all of the subtle percussion effects, while the vocals had that perfect haunted feel that I had previously not encountered when listening to this track as an MP3. Switching to the lighter jazz like tones of Corinne Bailey Rae impressed me even more – the super.fi Pros exhibited a level of clarity and subtlety that was, for want of a better word, beautiful. But I only really appreciated the super.fi Pros breadth of ability when I fired up The Rolling Stones. The choral intro to You Can’t Always Get What You Want sounds suitably angelic, while the switch to the acoustic intro is crystal clear to the point that you can hear the echo to Mick’s voice. Yes, this is it – plug in the super.fi Pros, throw on this track and just enjoy as the Mick and the boys build you up to a staggering crescendo, it’s what personal HiFi was built for. 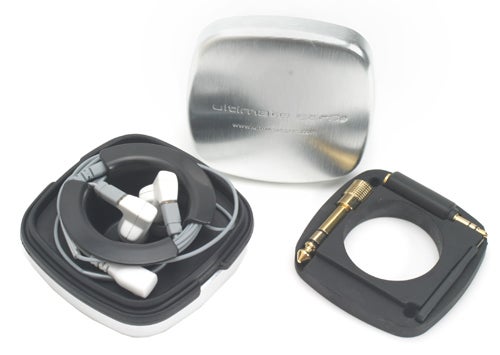 As I mentioned at the beginning of this review though, headphones are a very personal thing, and young Spode prefers the sound of the Shure e4c headphones that he reviewed recently. I found that the Shures lacked bass and sounded extremely thin by comparison – ultimately there will always be a degree of subjectivity involved.

The super.fi Pros ship with a pretty good bundle. As well as the headphones themselves you get mini-jack to full size headphone converter, a tool to clean anything nasty out of the headphones and a sound level attenuator. The latter is a surprising useful bit of kit that can potentially save your hearing by limiting the volume getting to the headphones. This is ideal if you decide to use the super.fi Pros on a plane, where those annoying cabin crew announcements can often be far louder than the film you were watching. There’s a solid metal case which holds the super.fi Pros and all the above kit – not only does this look good, but it keeps everything safe and in one place.


For the times when you don’t want to carry the metal case, there’s a real leather carry case that slips easily into a pocket – Ultimate Ears really has got all the bases covered. There’s even a full colour, paper manual in the box – now that’s something that’s a real rarity these days. 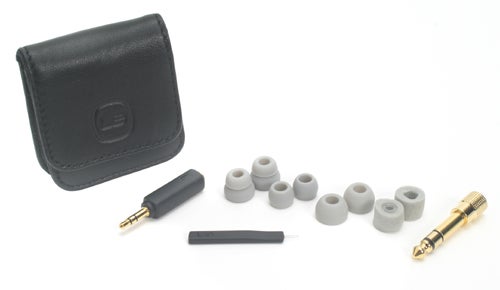 By now you’re probably assuming that the super.fi Pros aren’t cheap and you’d be right. After a bit of searching around the web I found that you can pay over £200 for these babies, but digging a little deeper I found that www.handheldaudio.co.uk is selling them for only £141. Of course that’s still a lot of money for a set of headphones, more in fact than an iPod nano. It comes down to how important audio quality is to you. If you’re happy with the headphones that came with your MP3 player, then the thought of spending this kind of money on headphones will seem insane, but if you want to truly get the best out of your player the super.fi Pros will be a very sound investment – no pun intended.


The super.fi Pros are the best in-ear headphones I have ever listened to, by a significant margin. The sound quality is quite simply staggering – if you think your iPod sounds good now, just wait until you plug these headphones in. £141 may seem like a great deal of money for a set of in-ear headphones, but if you really want the best possible sound on the move without massive cans on your ears, you want the super.fi Pros.