Not bigger but definitely better – the Megaboom 3 is probably the best speaker Ultimate Ears has released so far.

The first Ultimate Ears Boom was a landmark audio product when it launched back in 2014. At a time when Bluetooth speakers were just beginning to flood the market, it stood out with its 360-degree sound and rugged form factor. Soon after came the bigger, tougher Megaboom. The Ultimate Ears Megaboom 3 is the latest version of that model.

It’s fundamentally the same product, but with improvements in build, functionality and performance – all of which add up to a significant upgrade. Factor in a lower price tag, £170 instead of £250, and it’s clear that Ultimate Ears intends to remain a key player in the world of portable audio.

Note that there was never a Megaboom 2. Ultimate Ears has skipped a number in order to align the Megaboom 3 with its smaller sibling, the new Boom 3.

The core design of the Boom range hasn’t changed much over the years. The latest Boom remains a cylinder covered in a tough fabric, capped at both ends with copious amounts of rubber. 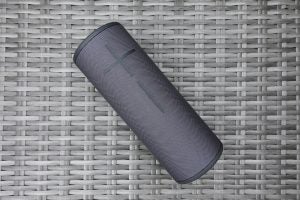 The cylindrical shape aids 360-degree sound – more on that later – while the unit’s ruggedness will ensure the speaker is able to withstand abuse in all manner of scenarios. Ultimate Ears’ marketing campaign lays bare the fact that this speaker is aimed at an extremely careless (and perhaps mildly sadistic) crowd. If you’re looking for a festival speaker that will survive being splashed with all manner of substances – baked beans, for example – this will do nicely.

In fact, the Megaboom 3 promises to be the toughest yet. It can survive being dropped from a height of 1 metre. Its IP67 certification means it’s dust-proof, and the Megaboom 3 will emerge from a dunk in 1 metre of water for 30 minutes in tact. To test the latter you’ll really have to hold the unit down, though, because the speaker is designed to float.

The tough outer fabric is made by a Swiss company that also makes industrial materials for motorcyclists and firefighters. 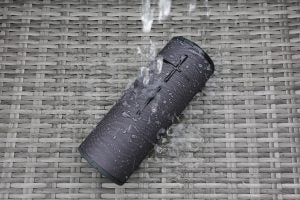 This latest iteration is a little prettier than its predecessors, with a slight iridescent finish that appears to shift a little under different lighting conditions. My review sample came in the subtle Night (black) finish, but there are bolder options: Sunset (red), Lagoon (blue) and Ultraviolet (purple), plus the Apple-exclusive Cloud (light blue) and Denim (dark blue). Note that Ultimate Ears has a habit of releasing new colours and designs after launch, too.

On the Megaboom 3 the volume buttons no longer sit on the thick rubber strip upon which they’ve sat since the first generation. Those buttons retain their comically large ‘plus’ and ‘minus’ appearance, but are now built directly into the speaker’s body.

A rubber strip remains, apparently necessary to cover up the seam in the fabric, but it’s now thinner and flush with the sides of the canister. The base of this strip can be peeled away to reveal the micro-USB charging port (cable and mains adapter included). Battery life is rated at 20 hours. 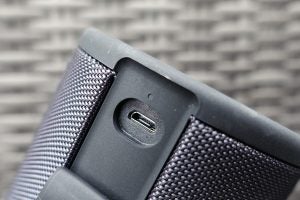 Ultimate Ears has moved this from the bottom to the side for two reasons. First, customers didn’t like having to upend the old speaker to charge it; plus, the old flap kept breaking. The bottom of the speaker now houses a silver contact point for wireless charging. You’ll need the Power Up attachment, sold separately for £34.99.

That contact point displaces the old tripod mount, but Ultimate Ears has added a fabric loop at the top, which is ideal for carabiners. If you’re the type to hang speakers on trees or backpacks, you may continue to do so.

Sadly, Ultimate Ears has taken a leaf out of Apple’s book and removed the 3.5mm input entirely. It’s wireless or nothing – which is just as well, since the wireless range has been bumped up from 30m to 45m.

The Megaboom 3 uses Bluetooth 4.2 – I’m told Ultimate Ears experimented with the superior aptX Bluetooth format, but decided against it. To be fair, I wouldn’t expect aptX to make a big difference at this (lower) end of the speaker market.

There is a new button layout. The power and Bluetooth pairing buttons remain where they are, but Ultimate Ears has added a third, dubbed the ‘Magic’ button. 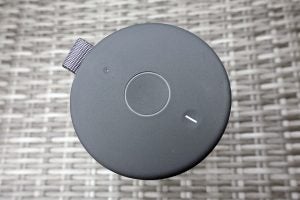 At its most basic, this button handles playing, pausing and skipping forward (there’s no rewind function as yet). That’s super-useful as it is, but it also handles playlists, which you can set up in the refreshed Boom app.

The idea is that you can turn on the speaker and jump straight into songs you’ve lined up, without digging into your phone and finding the right menus. It’s a great idea, and it works well. Unfortunately, at launch this function is limited to Apple Music and Deezer. Integration with Spotify would make it a killer feature.

The app’s PartyUp feature returns, allowing you to link up multiple speakers for simultaneous playback – theoretically up to 150 Booms. With the Boom 3 and Megaboom 3, Ultimate Ears has also added stereo pairing.

Note that the Megaboom 3 doesn’t have any online functionality, so it doesn’t feature smart assistant support such as Amazon Alexa. For that, you’ll want to check out the Blast or Megablast. Those speakers sit separately from the Bluetooth-only Boom family. 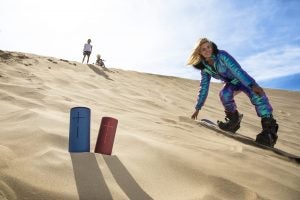 Ultimate Ears Megaboom 3 performance – Even better than its predecessor

The Megaboom 3 sounds better than its predecessor.

The key thing for me is that the sound is clearer than ever. The frequency range feels less cramped. The performance is more eloquent, particularly in the bass department. Overall, there’s a greater sense of separation – which is clearly noticeable with dynamically dense tracks such as Toto’s Rosanna. Enunciation isn’t as clear with the old Megaboom.

A quick dig into the specs sheets throws up a few plausible causes for this improvement. The passive radiators, which do the heavy-lifting in the bass department, have been modified. The dynamic range of the speaker is slightly wider, too – the Megaboom 3 gets as low as 60Hz – down from the original 65Hz. This isn’t significant, but extra dynamic headroom is always a good thing. 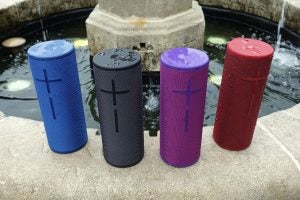 I also note the Megaboom 3’s sound is a little more spacious and less boomy than the original. That might have something to do with the removal of the thick rubber strip. The sound is definitely more evenly dispersed. Walk around the speaker and it’s far harder to spot a dead zone.

Elsewhere, the overall characteristic remains the same. This is an exciting, energetic sound. It’s fine at low volumes, but it’s happiest when cranked past 50% volume, when you can really feel that kick.

Don’t forget to go into the Boom app and tinker with the EQ settings, because the default setting can be a little too bass-heavy for those looking for a more neutral sound. I’d also advise running the speaker in for a couple of hours before ‘proper’ listening. That really helps to loosen things up. 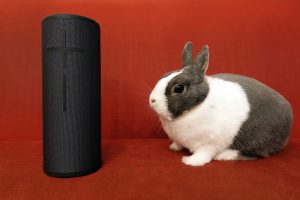 You should buy the Ultimate Ears Megaboom 3 if…

The original Megaboom was great, but it had a few flaws. The Megaboom 3 has addressed these weaknesses and made up for them by adding useful elements, such as a play/playlist button and a greater wireless range.

At £169, the Megaboom 3 is competitively priced and you’ll have a hard time finding another speaker that’s simultaneously this good and this rugged.

You should buy the Ultimate Ears Megaboom 3 if…

If that’s too expensive, there are other options within the Boom family. The Boom 3 is the smaller sibling to the Megaboom 3, and it costs £129. Meanwhile, the Ultimate Ears Boom 2 has been out for a few years, and it can regularly be found for under £100.

Those looking for a speaker with smart functionality should check out the Blast and Megablast. These support Amazon Alexa.