The Ultimate Ears 300vi are the first orange-coloured earphones Ultimate Ears has produced, but has the earphone veteran lost the plot in the process of making its buds more beautiful? These earphones are well-suited for sporty types, but whether the rest of us should be interested is another question.


Ultimate Ears’s renowned range of noise-isolating buds has traditionally been painted in black and silver hues, but the 300vis buck this trend with an eye-catching orange and grey design. It’s this colour scheme that first made us associate these earphones with sporty applications – for some reason sport earphones are often daubed with gaudy shades. Perhaps it’s so music-loving sporty types can spot them easily when they fall off, mid-way through running up a mountain.

Whatever the reason, this colour scheme will likely reduce the appeal of these buds – making them look less classy than the cheaper 200vi set. First impressions of build aren’t great either. Pressing the buds into the ear canal causes a nasty crackling sound, caused by flexing of components within the housing.


The 300vi earphones use an over-the-ear design seen in Ultimate Ears’s top-end off-the-shelf earphones, the TripleFi 10s. Each earphone has an orange “shapeable ear loop” that curves over the top of your ear. These aren’t as well-constructed as the loops seen in the TripleFi 10, where the flexible material is better-integrated with the cable itself, but the effect is the same. 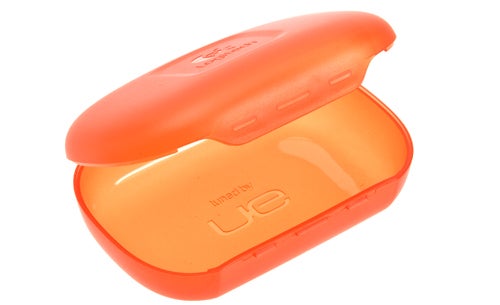 The downside of this design is that you have to wear these earphones over-the-ears, as wearing them with the cables dangling leaves you with a silly-looking orange stick hanging down from your lug’ole. The upside is that microphonic noise is almost completely removed. This is when movement of the cable, and its rustling against clothing, translates in your earbuds as a nasty, distracting rumble.


We took the Ultimate Ears 300vi out for a run, and found the knocking of the remote control housing against a T-shirt was enough to bring out some microphonic sound, but with less vigorous exercise there was almost none of this irritating sonic detritus. Once again, the earphones gain brownie points for the sporty crowd, thank to the stabilising effect of the loops. 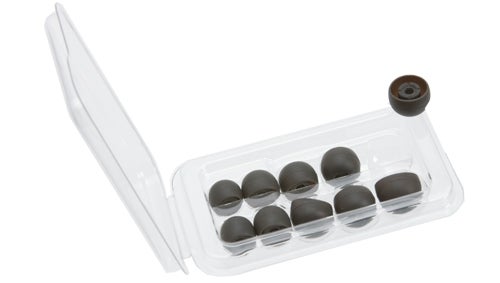 The package includes six pairs of rubber tips, in five different sizes (there are two pairs of the medium size), to ensure a fit with all kinds of ears. We found it easy to get a good fit with the 300vis, and even without a completely perfect match sound quality wasn’t as adversely affected as many IEM earphones, which can sometimes sound reedy and weak without a perfect seal. Also bundled is a translucent orange plastic case.

In-line with its colourful looks and sporty outlook, the Ultimate Ears 300vi have been “tuned for extra bass” according to Ultimate Ears. And boy, can you hear it.


The bottom-end here is big, bold and frequently boomy. This leads to a sound that’s not very sophisticated or refined, but is a good partner to a workout, as we found while testing the earphones on a run while pumping-out some electro. With some music the bass seems simply ridiculous though, reducing drum and bass with a heavy bassline to an overblown dirge. 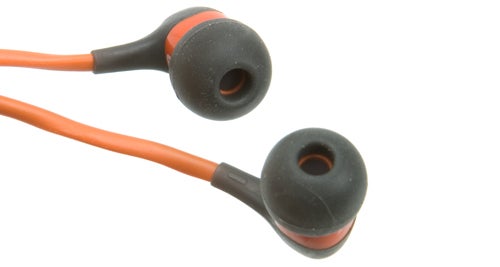 Unlike some basshead earphones, the Ultimate Ears 300vis aren’t completely dominated by the bottom-end at all times – the sound’s fairly warm and there’s a decent amount of high-end detail. However, the high-end can also sound harsh, which becomes fatiguing before long.


As a pair of earphones to take to the gym, these meat tenderiser-like earphones are a decent choice, but for calmer environs you can get a more refined sound from the classic Sennheiser CX550s, or the Ultimate Ears 400s, one step up this range. The sound is exciting and powerful but won’t please more critical or analytical ears, and isn’t easy on the ears enough for day-long listening.

Aside from trying to cave-in your ear drums while you bench press away, the Ultimate Ears 300vis also double-up as a headset for your mobile phone and a remote control for your iPod. The control housing for this sits along the right bud’s cable, just before it’s unified with the left bud’s wire. 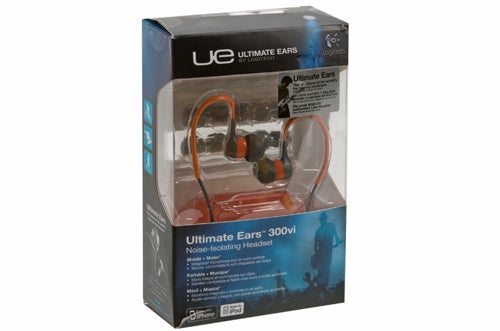 It’s comprised of three buttons and doesn’t add significant weight to the earphones – although it will bash against your clothes when jogging unless you secure it with the supplied plastic shirt clip. Used with a mobile phone, the central button takes and ends calls, while the two buttons at its sides change volume. We tested the Ultimate Ears 300vis with two Android phones (not officially supported) although only for taking calls – the volume buttons didn’t work. With an iPod Touch and iPhone, the remote worked exactly as expected, altering volume with the outside buttons while the central button works as a play/pause button.

The Ultimate Ears 300vi are good earphones for runners and gym fanatics thanks to their ear-hugging, microphonics-reducing design, but overblown bass and harsh treble mean they’re not the best buy for the rest of us.