I’m in two minds about why Nitrome’s latest is called Ultimate Briefcase. It could be because it’s a game about defending yourself from falling bombs by holding a briefcase above your head for protection as the streets around you are blown to bits. Or, it could be because, for the first few runs if not more, play offers a very brief case of action. Okay, that sounded a lot better in my head. I might have been right the first time.

Nevertheless, Ultimate Briefcase is an unashamedly short little adventure until persistence – or, if you’re so inclined, a little bit of cash – helps things along their way. The question is whether the simplicity of the action is enough of a draw that you’ll keep on playing after those first few deaths, or whether the whole affair so throwaway that coming unstuck again and again at the start of play is followed by a hasty uninstall. For me, Ultimate Briefcase skates quite a thin line between the two. 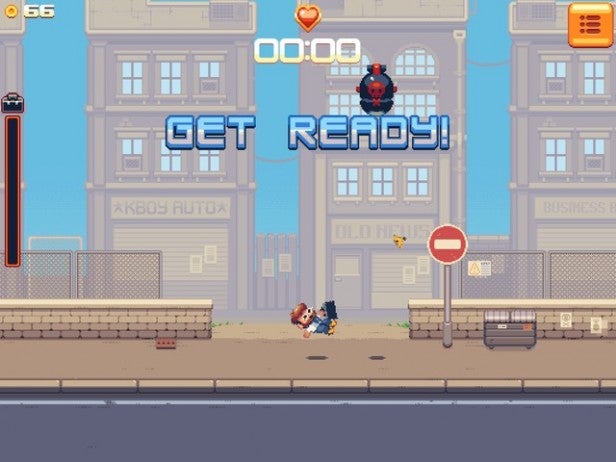 Taking charge of an office worker on his way home from the big smoke – with a mightily impressive beard, it has to be said – your immediate survival suddenly becomes top priority when bombs both big and small start falling from the sky. Your only input from this point onwards is to dart left or right by holding down your finger on the associated sides of the screen. With ammunition raining down in a constant stream without mercy, keeping on the move is the only way to stay alive, with the slightest bit of contact – at least initially – bringing about your demise.

Some of the objects darting towards the ground can be of use, however. Some specially indicated bombs let loose either coins or energy when they hit the floor – the former enabling you to buy items in the game’s shop without actually parting with real cash, the latter filling up a gauge that, when topped up, unlocks the aforementioned briefcase power up. Like all of the game’s power ups, its effect – offering a shield against the falling bombs – is only temporary, but the short and sharp nature of your safety only helps add to the feeling that your death is only a matter of milliseconds away. 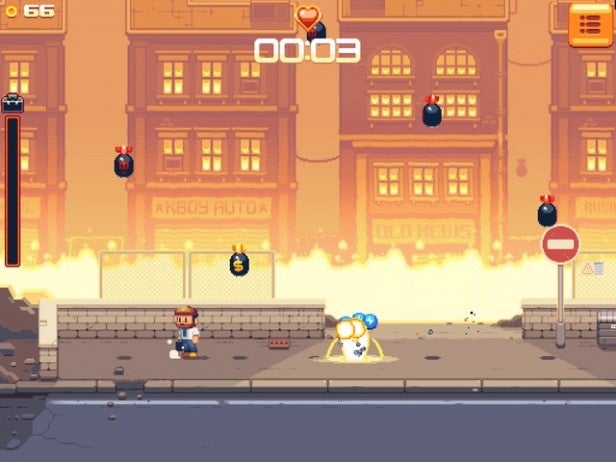 And that’s because, on the whole, it is. Coins you pick up in play (or pay for with your wallet) can be used to unlock additional power ups that drop at random for as long as you stay alive, though reaching them before getting hit by a bomb remains a challenge no matter how much money you splash on the game. Of course, knowing that your doom is just around the corner but managing to survive for a few seconds…and then a few seconds more…and then a few seconds more is Ultimate Briefcase’s bread and butter, but there’s a question of just whether play is deep enough to keep those who find its explosions a little hard to bear to begin with playing on until the power ups make things a smidgen more bearable.

There’s a distinct feeling that, despite Ultimate Briefcase’s edge-of-your-seat approach to touch-based play, there’s nothing here that we haven’t seen before. The beat behind what Nitrome has served up here is essentially the same beat that fires some of mobile’s best endless runners, from Jetpack Joyride to Canabalt, with the knowledge that a wrong move will bring the game to an end – unless you’re willing to watch a video or ad or, latterly, spend increasing amounts of in game currency. The problem is, the kind of thrill those endless runners were able to deliver has, somewhat ironically, come to an end. 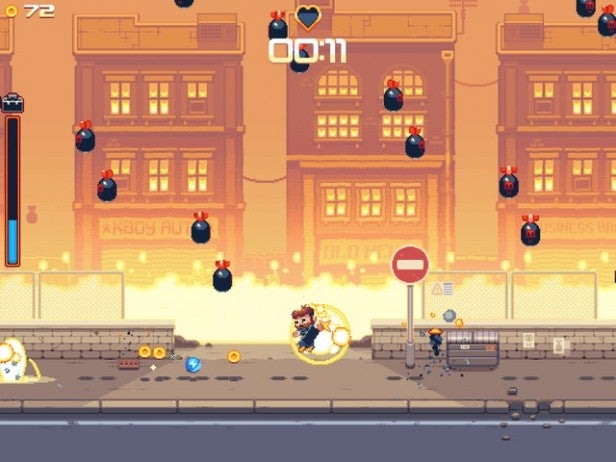 Jetpack Joyride is almost five years old now and Canabalt even older, and though it can be argued that the arcade nature of knee-jerk games like Ultimate Briefcase is universal and never really grows old, it’s equally true that Nitrome hasn’t really taken the genre anywhere new. Which leaves it in the awkward position of being fun for what it is, but perhaps not doing enough to be a keeper long term. This is one bomb with something of a short, if spectacular, fuse then.

Verdict
Focusing almost entirely on your reactions, Ultimate Briefcase is an arcade style adventure where dodging falling bombs from start to finish is the order of the day. Though it’s fun while it lasts, it ultimately doesn’t bring anything to the table that hasn’t already been covered several times over by endless runners of old.