UFC 4 is an enjoyable trip into the world of mixed-martial arts which makes some ample improvements to the formula when compared to previous entries. While it can still feel underbaked and bland in certain areas, such as the career mode, it has been refined with a stellar onboarding experience that makes it super accessible to newcomers.

As a newcomer to the world of mixed-martial arts, UFC 4 felt like a daunting prospect. Only familiar with the professional fighting world through the eyes of scandals, knockout compilations and the fact that Ronda Rousey isn’t a very nice person. But this lack of knowledge was a surprisingly easy barrier to surpass when it came to jumping into EA Vancouver’s latest sporting sim.

UFC 4 has been engineered with newcomers in mind, while never forgetting about the hardcore fans who flock to experiences like this for a nuanced technical showcase of the craft that takes into account every strike, hold and submission that makes this sport so enthralling.

While it can fumble with inconsistent mechanical systems and a lacklustre presentation, it achieves its goal with great results, transforming me from a hesitant sceptic to a fledgling fan. Hardcore followers will be disappointed over iterative changes instead of massive overhauls compared to last year’s entry, but UFC 4 is building upon a solid foundation with small yet necessary steps. 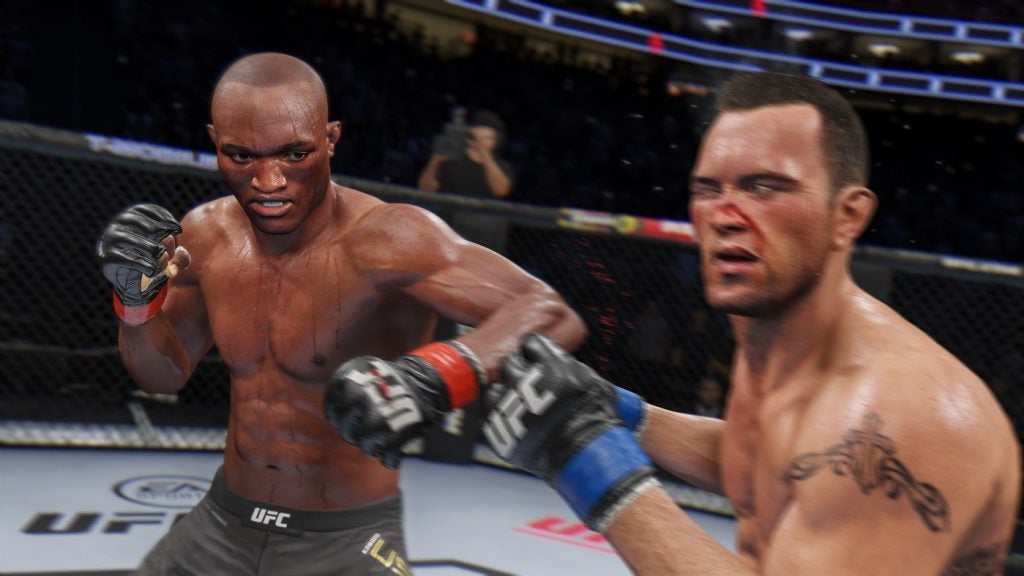 Upon jumping into UFC 4 for the first time, you’re immediately thrust into the character creator to craft your very own athlete. I had some trouble creating an avatar who resembled my own appearance, so I opted for the fantastical approach with bright hair colours and unusual proportions that would hopefully frighten my opponents into submission if I didn’t have the technical prowess. From here, it’s onto the Career Mode.

EA Vancouver has created this new story portion with the goal of bringing new players into the world of UFC, slowly introducing them to mechanics of matches, which genuinely feel like triumphs when you emerge victorious. After being absolutely trounced in the amateur circuit, you’re taken under the wing of Coach Davis, a former fighter who is keen to train the next generation of athletes.

Davis will teach you a discipline of moves and techniques before throwing you into a match with someone who specialises in them, offering you an opportunity to test your newfound knowledge against a like-minded rival. It’s an effective introduction before the career mode settles into an established groove which will be familiar to those who played UFC 3.

Once you’re settled into the fighting world, you’ll take on weekly fights and different opportunities provided by your manager while slowly but surely ascending to the big leagues. There’s a definitive sense of progression here I really appreciated, with losses still providing an element of satisfaction since your proficiency in different moves increases the more you use them, meaning you aren’t hindered by generic skill upgrades. 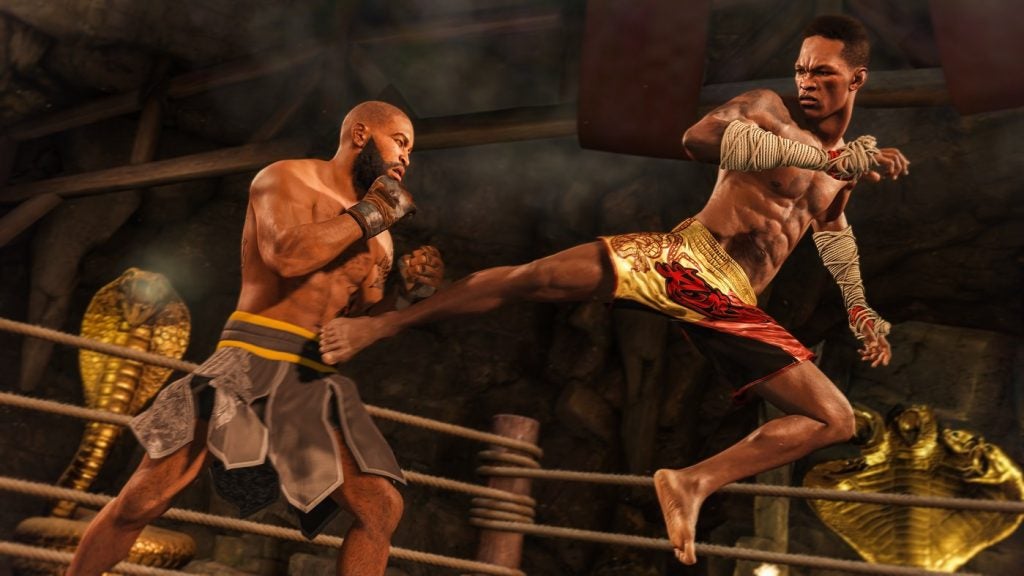 I will admit the career mode is held back by a distinct lack of personality, with the majority of characters coming across as robotic caricatures of their real-life counterparts. Crowds are lifeless, while dialogue coming from my avatar felt detached from every situation she was in. A dialogue system outside of brief interactions with texts and social media would have given things more life, or perhaps building a career-spanning feud with a fellow fighter as we both climbed the ranks.

But how is the actual art of fighting in UFC 4? Do you feel like a capable fighter, or a mediocre fool mashing at buttons hoping your adversary hits the mat in a mess of bloody limbs. Fortunately, the combat system is wonderfully accessible. Punches and kicks are mapped to the face buttons, and you can combine certain combinations to perform kickboxing, knee strikes and other techniques.

The shoulder buttons are responsible for blocking and performing a mixture of high and low blows, all of which are essential in getting your opponent onto the ground to execute a submission. Alternatively, you can rush an enemy with a tackle, which stands a good chance of bringing them to the ground for a minigame. Here, you can choose to perform a submission move, pummel their face in or jump back onto your feet.

Who is successful is dictated by whoever has enough stamina to fill up their respective metre quick enough, meaning it can fill a little arbitrary at times. It feels fairly seamless otherwise, with fights transferring from sparring to clinching right onto the mat with smooth, realistic animations that are a joy to watch. 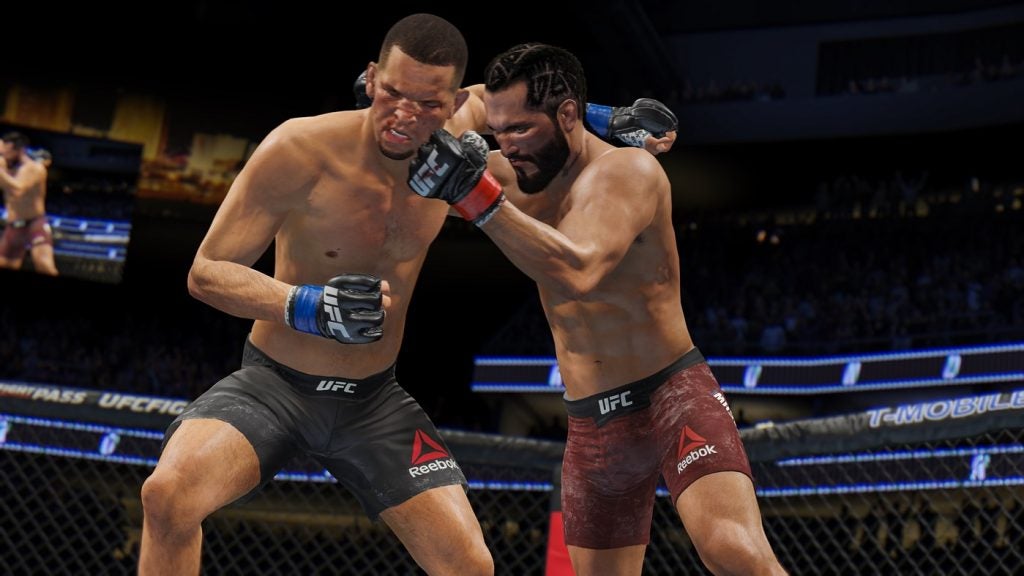 Achieving victory through submission is expressed once again through a minigame, where you must dominate an opponent’s icon and fill up the gauge before they escape. Fortunately, how long you last in these instances is dependant on stamina and your overall condition, so there’s no way to accidentally mess up and throw a match like in WWE 2K, which is a huge relief.

If you aren’t an MMA expert and are worried about forgetting all of these fancy moves, assist options make the act of performing them much easier. Even so, things are taught in a way that you’re only expected to remember select things at any given time, although don’t expect to find success by randomly mashing buttons. Fail to watch your stamina, and you’ll be dominated in a matter of seconds.

Those who prefer a more arcadey experience instead of chasing after photorealistic title belts will be happy to learn that EA Vancouver is unleashing its playful side with UFC 4. A few select inspirations throw you into backyard cage matches or ancient tombs, with each fighter sporting a garb that’s perfect for the occasion. Leaning into this with fun unlockable characters would have been the cherry-on-top, but sadly they’re nowhere to be seen. 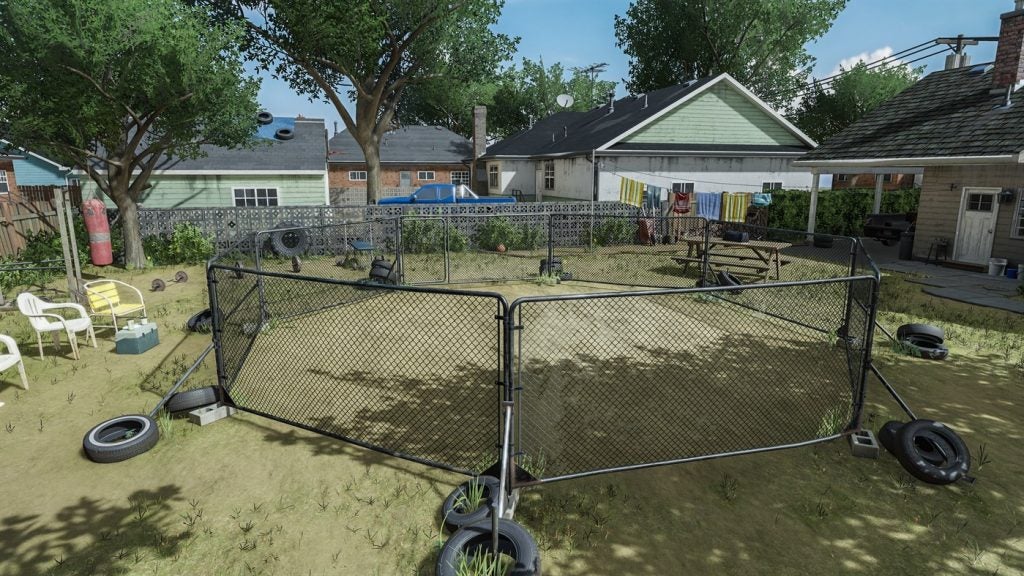 UFC 4 is an enjoyable trip into the world of mixed-martial arts, which makes some ample improvements to the formula compared to previous entries. While it can still feel underbaked and bland in certain areas such as the career mode, it has been refined with a stellar onboarding experience that makes it super accessible to newcomers.

Creating my fighter and slowly working my way into the world of UFC was rather enjoyable, and it felt like I was learning all of the different skills and building upon them with each new victory. In a year where the world of professional sports has ground to a halt, EA Vancouver has managed to build upon its virtual counterpart with a number of worthwhile additions.