Available February 2 on PS4 and Xbox One (Version Tested)

EA UFC 3 kicks off with a stirring montage documenting Conor McGregor’s remarkable rise to fame and prominence, intercut with in-game recreations of his most infamous knockouts and press conference exploits. The intro ends with the appearance of Tony Ferguson, the unusual, lithe, rangy contender set to unseat the Notorious one from his throne, and then quickly moves into a fantasy match up between the two for the lightweight belt.

This is clearly the direction the UFC had intended to go, until Conor decided to take an extended hiatus, leaving now champ Ferguson to battle Dagestani grappling machine Khabib Nurmagomedov in a  colossal April showdown, but not one that has the gravitas and sheer magnitude of a McGregor fight. And like real life, EA UFC 3 shows great promise; a fighting and sports game on the precipice of greatness, but also one that flatters to deceive, leaving you wondering what could have been with more time, more care and more craft.

Let’s get one thing out of the way quickly though – this is absolutely the finest of EA’s UFC trio; a more kinetic, dynamic representation of the sport than those that came before it,  one with a completely rewritten animation and striking system that will confound experienced series veterans until they wrap their heads around it, and wrap their chosen fighter’s shin around a stricken opponent’s head. 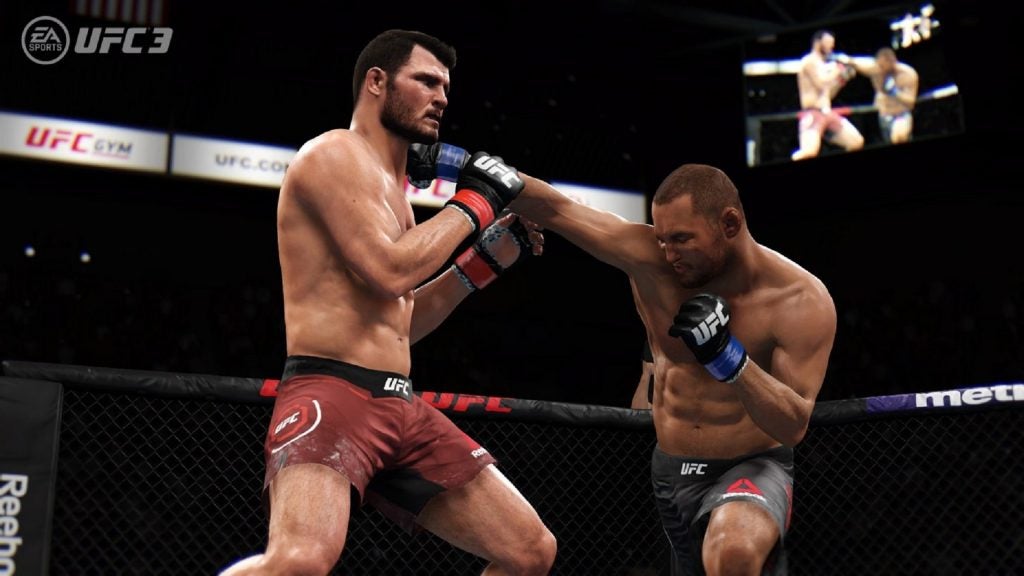 Fighters can now move and strike at the same time; a fact that seems trivial written down, but fundamentally changes and hugely improves the experience. But it’s at a cost. The elegant system of old that saw button presses combine with directional tilts of the left stick for straights, hooks and uppercuts has been replaced by a multi-button tangle that often requires three or even four simultaneous button presses just to execute a specific strike.

It feels like madness at first, but it’s all in service of movement. It may take two buttons to throw an uppercut, but now you can do it while sliding laterally away from an incoming strike. The right stick is now exclusively given over to head movement, meaning you can combo a well-timed slip or bob into a devastating counter. The convolution of the system is a small price to pay for the first time you slip a shot and land Conor’s crushing left.

Fights, while standing anyway, feel less static and stiff than before, with new knockdown animations and ragdoll KOs adding to the drama. The same sadly cannot be said for MMA’s most nuanced and intricate disciplines, wrestling, grappling and jiu jitsu. EA UFC 3 utilises the same confusing system as previous games, where players look to tilt the right stick in specific directions to fill up circles on the HUD. 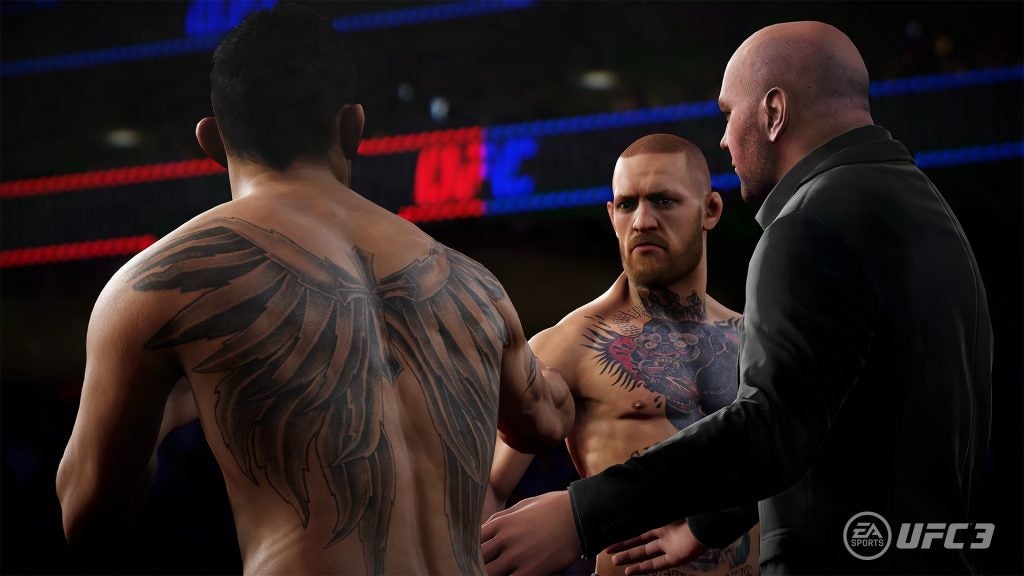 It’s basically exactly the same as the previous game, with a handful of new animations but little change in the actual mechanics. It reduces a martial art about weight, leverage and three-dimensional movement into a series of distracting mini games. Of course, no one has come up with a good solution to this problem – grappling is just so difficult to recreate. But the lack of fluidity here in comparison to the striking is disappointing. It’s nice to see transitions between wrestling, cage control and ground work appearing (all new since the recent beta, even), but grappling is never a binary art – hopefully the next iteration will look to redefine the grappling in the same manner as this effort has changed the striking.

Stepping outside of the Octagon, EA UFC 3 offers a solid suite of modes and options, as you’d expect from an EA Sports game. With online servers now live, it’s pleasing to announce the Online Division mode is smooth and largely latency free, offering a very similar experience to that found offline. Here you can select which weight classes you fancy, and then face off against a random opponent. String together five wins, and you’ll get a championship fight. It doesn’t mean anything, but it’s still a nice meta goal to aim for.

More substantial, then, is Ultimate Team, which has already garnered controversy in this age of lootboxes and microstransactions. It’s an oddly complicated mode, with FIFA-style card packs to not only unlock fighters, but also moves, bonuses and perks. Of course, there’s a currency involved that lets you effectively pay real money for high-level packs, but in my time with Ultimate Team, I haven’t felt like I’d need to go anywhere near spending real money. 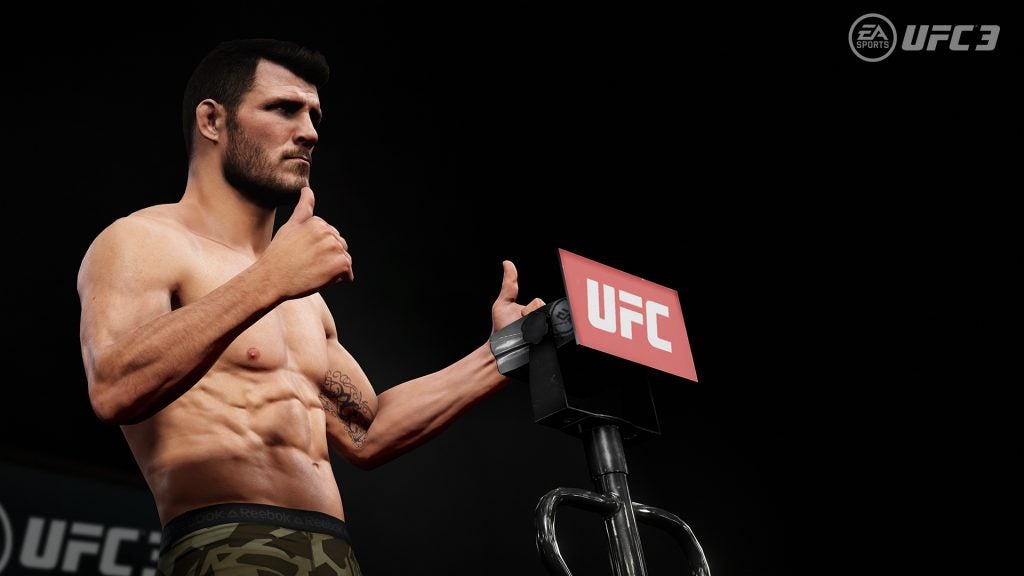 Instead, you have quite a creative idea, where you effectively build out your own versions of famous fighters (or your own created character) using the moves you grab in packs. Only bonuses and perks have limited use, so you won’t lose your precious gold Conor McGregor, just the added ‘heart’ bonus you may have found (not unlike the first Diaz fight).

Time will tell how much high-level Ultimate Team play requires real-money spend, but this absolutely doesn’t feel like a repeat of Star Wars Battlefront 2. And it’s worth remembering that you can happily play almost all of EA UFC 3 without ever seeing a microtransaction or a card pack – this stuff doesn’t affect normal online play at all, or any of the single player action.

Speaking of which, solo players get to enjoy the G.O.A.T career mode, which charts your created fighter’s rise from obscurity to Pay Per View behemoth. These modes are always tough to make interesting, as they often bog players down in tedious mini games in a grind for stats between contests. There are elements of that familiar slog here, but they’re streamlined to the point of almost being negligible. Between fights, you pick a gym to train from, and either quickly add some stat boosts by selecting training routines, have a one-minute sparring match in order to gain fitness and a potential key to victory against your next foe, or take part in a brief mini-game scenario in order to add new moves and perks to your character.

As you progress and gain fans and fame, UFC personalities like Dana White and Megan Olivi will comment on your career in slick video packages. Rival fights are preceded by cut-scenes that place your fighter in press conferences or training montages. And the fights themselves are varied and tactical, although the AI is very keen on slamming you with stamina-draining body shots. The G.O.A.T mode won’t hold your attention as much as a tense online match or the potential of Ultimate Team, but EA has still done excellent work in making it about as interesting as possible. 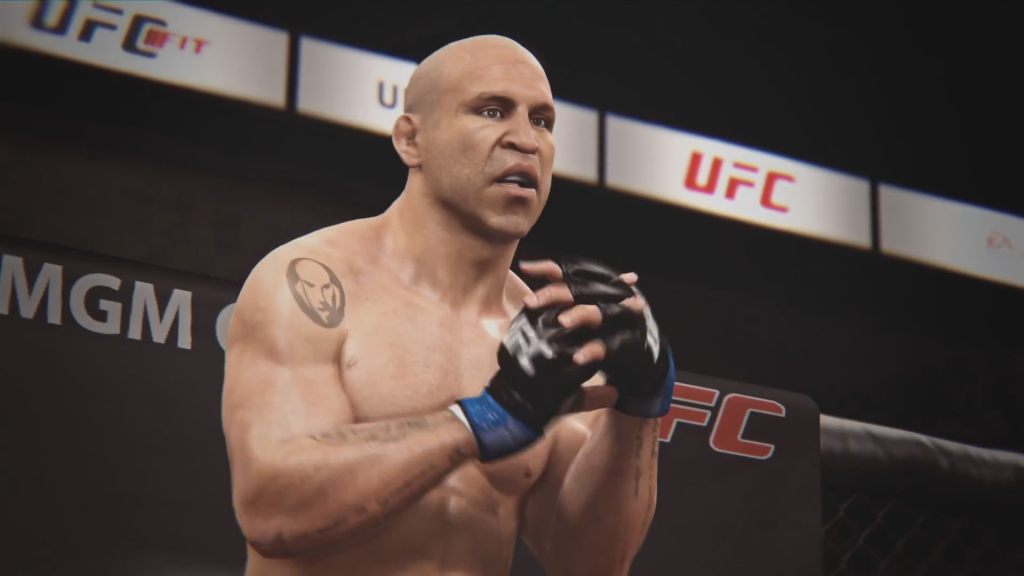 And G.O.A.T is joined by some daft modes to round out the package. Stand And Bang and Submission Showdown force you to either fight exclusively on your feet or on the ground respectively, and the returning Knockout mode actually features guest commentary from none other than Snoop Dogg, fresh from his turn on Dana White’s Contender Series.

As you’d expect, too, the game looks truly spectacular. Animation, lighting, skin texture and fighter likenesses are amazing, and at times it genuinely looks like the real thing, especially when the more famous fighters like Conor, Daniel Cormier and Cody Garbrandt have their own idiosyncrasies and subtleties captured.

EA Sports UFC 3 is a fine attempt at recreating one of the most complicated sports on earth; a dynamic, exciting and often thuddingly violent fighting game that makes marked improvements to its striking game, but just like poor old Francis NGannou, still needs a lot of work on the ground.