The UE Roll 2 is an wireless speaker that rejects the usual design format of such a device. Rather than being shaped like a brick, it’s a Bluetooth discus: round, but fairly slim.

It’s waterproof, very loud, and at £80 isn’t ridiculously expensive. However, since the UE Roll 2 doesn’t adopt the tricks of other small Bluetooth speakers, its bass is found lacking next to the rest of the sound. 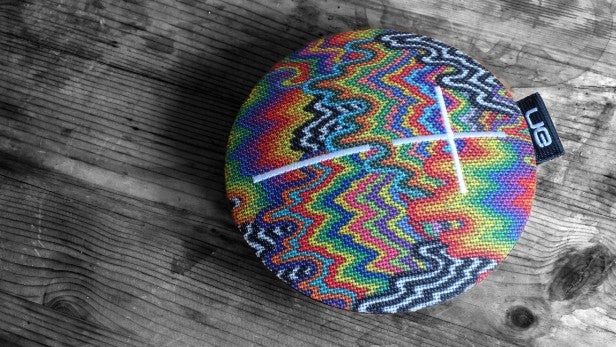 UE’s wireless speakers don’t play by the usual rules for such devices. For example, the UE Boom 2 is shaped like a giant drinks can and the Roll 2 a strange-looking disc, akin to small version of the £2,000 Bang & Olufsen BeoPlay A9 floor-standing speaker.

I actually expected the Roll 2 to be smaller than it is, however. On a webpage it looks like it might be a kiddy speaker, but the UE Roll 2 is a handful even for adult mitts. It’s a bold design and, frankly, appears to be far cooler than most portable speakers.

The psychedelic finish of the unit we were sent in for review might not be to everyone’s taste, but it’s also available in more muted designs: 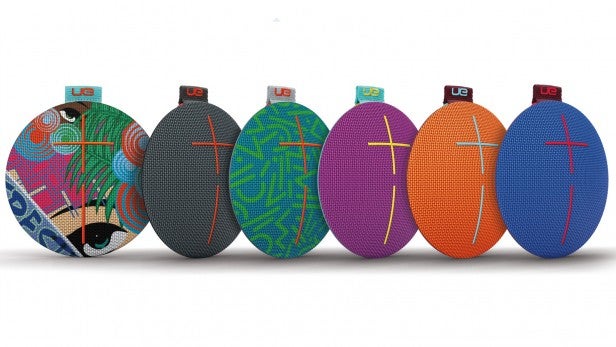 Don’t dismiss the UE Roll 2 as simply offering style over substance, though. The design is absolutely linked to its audio engineering, and it has several great practical features.

First, the UE Roll 2 offers excellent water resistance. It’s certified to IPX7, meaning it can be submerged in 1m water for 30 minutes without any ill effects. The grille is ultra-tough, using what appears to be a nylon weave, and the micro-USB charge socket and 3.5mm input on the rear of the unit are covered by a chunky rubber flap. 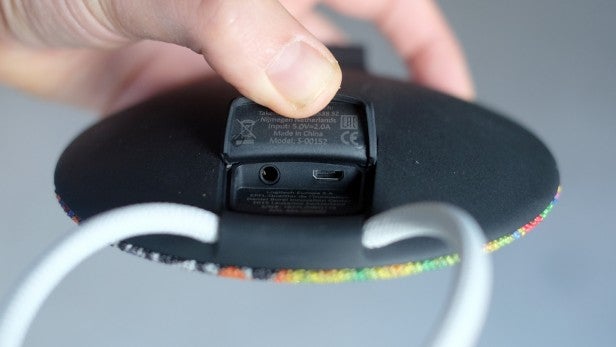 A thick bungee cord is attached too, enabling you to hook the Roll 2 onto things, or carry it around more easily. Look at the UE website and you’ll see photos of people jumping off cliffs with the device attached; I’ve hung up the unit in the bathroom so I can listen to podcasts in the shower.

This is also one of the few speakers you’d want to take to the beach. It’s tough.

The battery lasts for up to nine hours according to Ultimate Ears, and in my experience it easily lasted a day and beyond into a second day’s music. Its stamina isn’t sensational, but will be good enough for most uses. 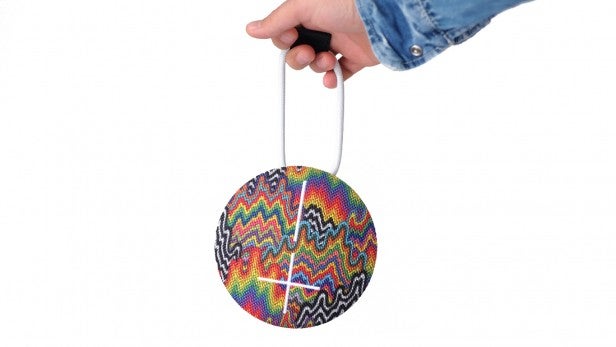 The giant buttons on the front alter the volume

For the most part the UE Roll 2 is a simple Bluetooth speaker, but there’s an app too. This lets you set an alarm, fiddle with the EQ and pair-up different UE speakers. I’ve just been using the one speaker, but you can make a stereo pair or link up to 50 units after a recent update. There’s no mic, though, so you can’t take calls with the Roll 2.

The UE Roll 2 doesn’t use the same driver style as most smaller Bluetooth speakers. Usually, you’ll see a tiny driver or two and something called a bass radiator, which is a little like a non-powered subwoofer.

There are no dedicated bass drivers here. Instead, the UE Roll 2 has a fairly large 2-inch main driver and two little 0.75-inch tweeters.

The effect is just as you’d expect. Given its size, the UE Roll 2 has the projection of an opera singer. It sounds good at low volumes and can go extremely loud with no major distortion. Clarity of the mids and treble is excellent for this class of speaker too. 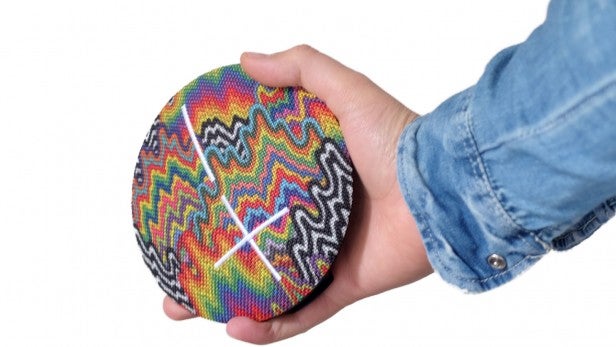 This is largely down to the size of that main driver, which is the same diameter used in wireless speakers far larger than this one.

The problem is that the bass gives up entirely at a relatively high frequency. It’s very good up to a point, but then the Roll 2 simply can’t deliver at the lowest registers.

Listening to the speaker next to rivals incorporating bass drivers, the missing bass is obvious. It isn’t simply about making kick drums sound meaty, since these missing bass frequencies are present in most vocal lines as well. 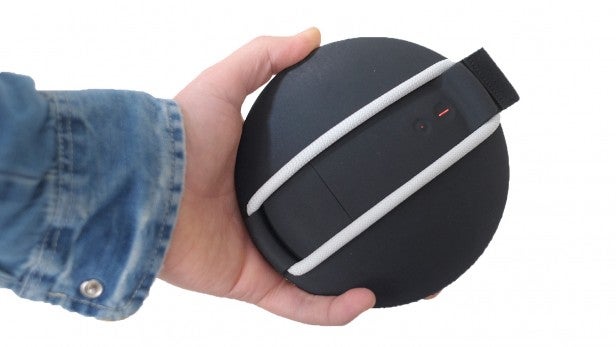 To get a slightly more empirical view of exactly what we get here, I fired some test tunes through the UE Roll 2 and the last small speaker I reviewed, the Creative Muvo 2c. The Creative model is half the price and has a bass radiator, but a much smaller main driver.

Where the first stirrings of UE Roll 2 sound begin at around 95Hz, the tinier Creative Muvo 2c produces meaningful output from about 60Hz. That 35Hz disparity gives the Creative a sense of depth to its bass, which the Ultimate Ears speaker lacks. In fairness, in the Roll 2’s specs, UE states that the frequency response of this speaker starts at only 108Hz.

However, that is all it lacks; its high maximum volume and great projection mean that the Roll 2 can handle delivering sound outdoors better than the majority of small speakers. 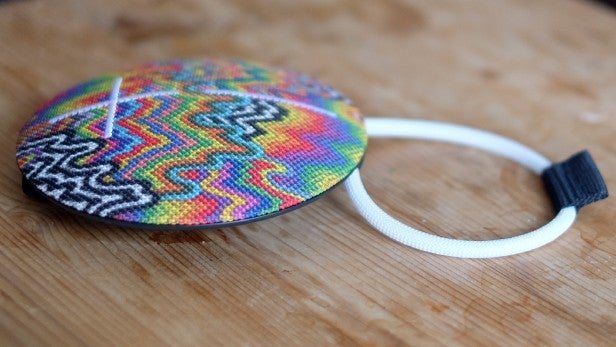 Should you buy the UE Roll 2?

The UE Roll 2 is one of the best sub-£100 Bluetooth speakers around. It’s primed for the outdoors in every way, with a tough waterproof shell and sound that cuts through ambient noise well.

It’s a little less hot if you’re going to listen indoors, though, since the bass depth is bettered by several alternatives including the Jam Heavy Metal and the cheaper Creative Muvo 2c.

Have a think about what you’ll use the UE Roll 2 for, then. If it’s for the beach, the shower or adventurous holidays,  this speaker will be right up your street, especially with its useful integrated bungee cord. If it’s likely to spend the majority of its time between the lounge and the kitchen, however, there are better options available.

A striking, rugged speaker offering superb volume, if not the deepest bass.