What is the UBTech Alpha 1 Pro?

Take that cynical sneer off your face. Yes, it’s another humanoid robot that can’t make a cup of tea or take the bins out. If you’re looking for a domesticated automaton, go buy a Dyson 360 Eye. This robot is all about entertainment.

The Alpha 1 Pro has a body articulated via 16 motor servos – like joints with their corresponding muscles, but, y’know, machinery. That gives it a superb range of movement. It can dance, walk, play football and do kung-fu – but only when commanded via its companion app. 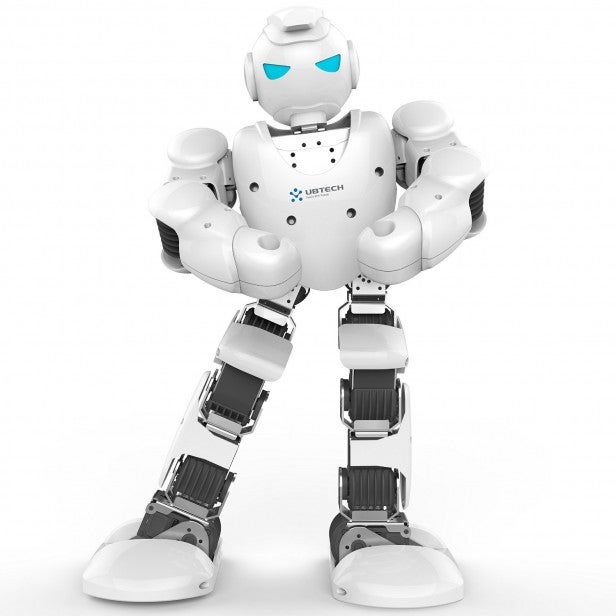 The Alpha 1 Pro comes fully assembled and with minimal accessories in the box – just a mains charger and a Mini USB cable.

He’s a buff little fella, all puffed-out chest and broad shoulders, and looks much like the leaner brother of WowWee’s iconic Robosapien V2 from a decade ago. Or perhaps the scheming love-child of Honda Asimo. He’s a pretty generic-looking humanoid robot, in other words.

Alpha’s probably about as big as you’re expecting – certainly as I was expecting. He’s 40cm tall, and he weighs in at 1.65kg. As with most bipedal robots with a similar range of movement, he’s all floppy when he’s turned off and the servos are powered down. Don’t expect to be able to stand him up for display in his downtime.

There’s an awful lot of white plastic here, broken up only by the black plastic and silver metal of those 16 servos at all the joints. The eyes and ears house LEDs that indicate the Alpha’s status, as do all the servos.

Like the aforementioned Asimo, he’s got rather an unfortunate hunch. While Honda made a feature of this Quasimodo-ism on its experimental robot, making it look like some kind of jetpack, UBTech has just left the Alpha’s as an ugly lump.

Still, at least it’s an ugly lump with some purpose – it’s the only really safe place from which to pick up the Alpha, and it also houses the on/off button, Mini USB port and charging socket. Oh, and a big red button marked “Emergency Stop” which I’m too scared to press. 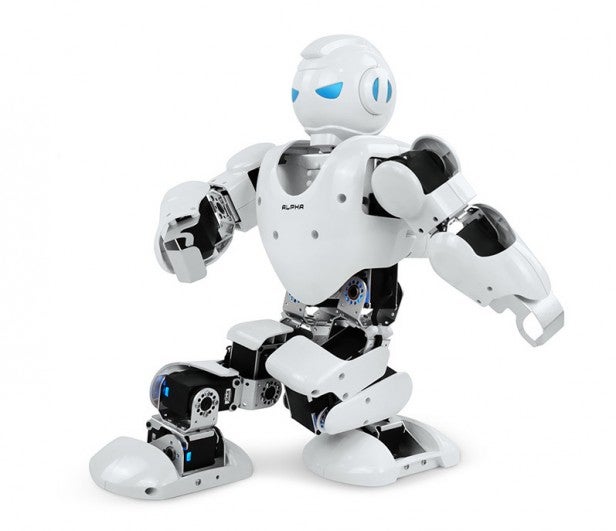 Since the Alpha 1 Pro comes fully assembled, all that was required before getting it active was a charge. Considering it has a Mini USB port, I was a little surprised to find I couldn’t charge it via USB – that’s just for connecting to a computer. After a couple of hours plugged into the mains adapter, the charging light on the Alpha’s back had changed from red to green and he was good to go.

The first thing I did, as recommended in the instructions, was to try the demo mode. A quick double-tap of the on/off button sent the Alpha into a preprogrammed routine where he introduced himself, played some music, showed off his impressive balance and, er, danced to “Gangnam Style”. Yeah. Seems like the sort of thing that’s just been added to get YouTube hits, but at least it shows off the Alpha’s speed of movement.

So, with that over, and since the Alpha can’t respond to voice commands or gestures, I downloaded the Alpha 1 control app.

The app is available for Android and iOS, and it feels a little underbaked. I had a few crashes with the Android version, and it just doesn’t feel as slick nor intuitive as it should. It’s essentially broken into two parts: Roles (or “Gamepad”) and Actions. 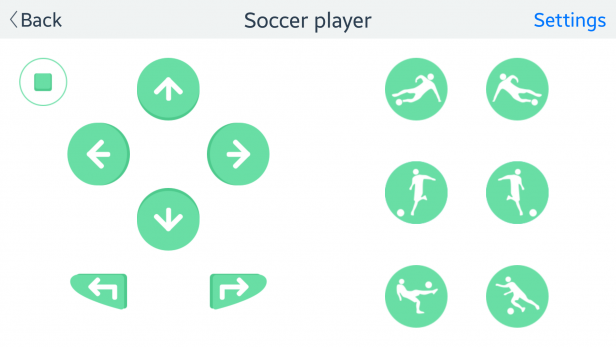 Roles are a group of related movements presented like a virtual gamepad, and the only preprogrammed ones are those of a footballer (“Soccer player”) and a gladiator. Both Roles enable the basic forward/back, left/right and sidestep functions, as well as some specific to that Role, such as kicking for the footballer and punching for the gladiator. The hands-in-the-air victory pump is a nice one.

You can create your own Roles, which also utilise the standard direction pad as well as up to 20 Actions that you’ve created or downloaded.

Actions are preprogrammed routines, much like the demo mode. Once you’ve registered within the app, you can download Actions that have been uploaded by other Alpha owners, or create your own Actions.

Programming an Action from within the app is pretty simple – you just move the Alpha into a pose and add it to the sequence, adjusting how long each movement should take. When you’re done, you can then name the Action, decide which category it falls under – such as Sport or Dance – and then choose whether to share it with the Alpha-owning community.

More precise programming can be done via UBTech’s software for Mac and PC. The interface is far more bewildering than the app’s, but the level of control and ease with which you can add music or default actions makes it worth trying to figure out.

In truth, the Alpha’s range of movement only feels a little more impressive than that of the Hitec Robonova-1 I used many years ago, which also boasted 16 servos in a similar configuration. However, the Alpha’s moves are faster and crisper, the Robonova didn’t have app control – there was no such thing back then – and the Alpha is far easier to program.

The biggest problem I had was that the Alpha didn’t seem entirely comfortable on most surfaces. Carpet was the worst – as it usually is for robots – with him falling over every time he made a sudden movement. But ceramic-tiled floor also caused some problems because of his slipping feet.

The Alpha appears to have been designed with wooden floors in mind, which means it just won’t be suitable for use in certain homes. He worked perfectly on my dining-room table, with the wood offering up just enough friction for the Alpha’s smooth soles. It’s just a shame that wasn’t really where I wanted to use him. 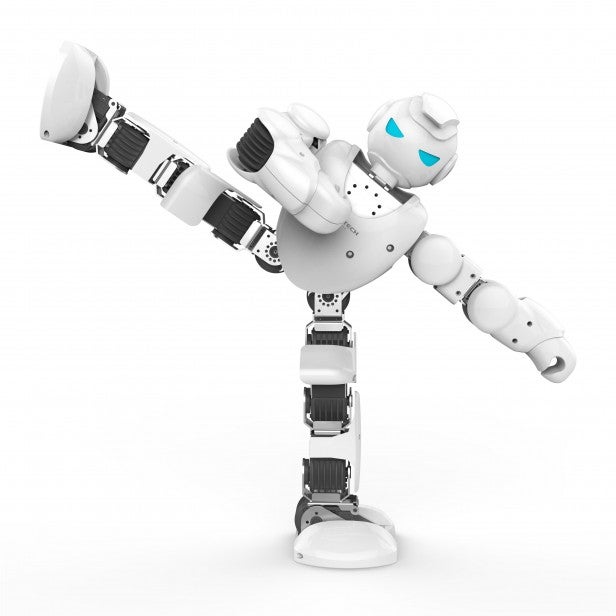 Should I buy the UBTech Alpha 1 Pro?

The Alpha 1 Pro’s movement is certainly impressive. He can pull off some crisp, fast motions that you wouldn’t expect to see at this price point. But he also struggles on any surface that’s either too soft or too smooth. It’s wooden floors or bust for this little fella.

There’s also the question of how much value you’ll get beyond the preprogrammed actions. The Alpha won’t just potter around and do its own thing – it has to be commanded, and it doesn’t even have voice or gesture control. If you’re not prepared to put some work in on the PC/Mac software to program some more intricate custom routines for it, you’ll get bored by it very quickly.

This robot has a great range of motion and is easily programmed, but it struggles on certain surfaces and lacks voice or gesture control. It needs to do way more to justify the high cost.