It seems that summer is finally upon us. Great. Lots of warm weather, cricket on the telly and barbecues in the garden. Unfortunately, there is a downside to the sunny season – and that’s having to put up with 13 weeks of listening to supposedly intelligent people banging on about a bunch of idiots on the telly. Yep, it’s Big Brother time again, and I’m afraid to say I just can’t see the attraction.


This general sense of bafflement is one I get from time to time upon hearing of certain developments in the technology industry too. In fact it happened last year when Microsoft launched its “origami” concept to much fanfare. While almost every other hack on the planet was getting in a complete tiz about it, I honestly couldn’t work out what the fuss was all about. 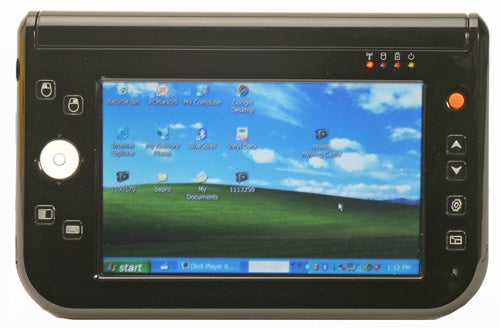 We already had plenty of ultra mobile, fully fledged Windows PCs, didn’t we? We also had plenty of tablet PCs. The formats had filled a niche, but hadn’t exactly set the world alight, so why should Microsoft’s sudden interest make any difference?


Nevertheless, Bill Gates’ minions pushed ahead and the result since has been a steady trickle of small, keyboard-less tablet-style UMPCs, the most notable of which, reviewed in the pages of this website, has so far been Samsung’s Q1. Now it’s the turn of the Ubiquio 701 to convince us that Origami is a good idea. 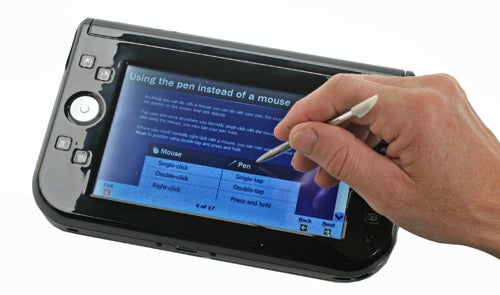 First impressions are good. In format it’s very similar to the Q1: slightly bigger, but still highly portable. It’s about the size of a large-format paperback book, with a seven inch, 800 x 480 touch-sensitive screen on one side, surrounded by a number of thumb-operated controls.


It looks reasonably smart too, mimicking the Q1’s glossy finish, and feels very solidly built with no rattles or creaks apparent in the chassis. The number of fiddly buttons have been kept to a minimum, and this helps the 701 maintain a sleek, uncluttered look. 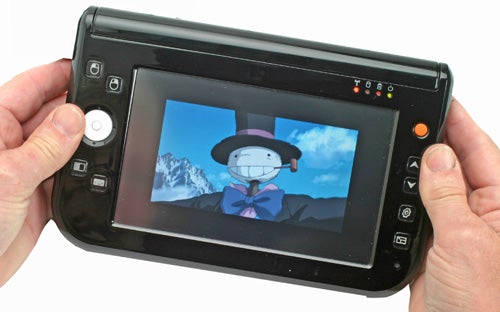 But the lack of buttons doesn’t mean that the 701 is difficult to use. On the contrary – they actually make this one of the easiest to use UMPCs around. The star of the show is the notebook-style mouse nib, which gives you an alternative to the stylus or your finger, when you just can’t be bothered. Below this are big, thumb-sized buttons for quickly scrolling up and down pages, so you don’t have to faff about with scrollbars. There’s also a settings quick launch button here and a key that’s used to switch quickly between different screen resolutions – especially useful for rescuing you when important dialog boxes disappear off the edges of small screen.


To the left of the screen are the left and right mouse buttons and a directional pad that mimics the cursor keys with an enter/double click button in the centre. And below this are shortcut keys for launching Tablet PC Edition’s handwriting recognition panel and Program Launcher application. Finally, set into the bottom right hand corner and half-recessed, is a very handy CTRL-ALT-DEL shortcut button for launching the task manager.

As I said before, this all makes the 701 a very easy machine to use. And if all you want to do is browse the internet, read a few emails, and write the odd short note – even watch a video or two – you’ll find this a competent companion.


I had no complaints with performance either. Though its 512MB of RAM, 40GB hard disk and 1GHz VIA C7-M processor won’t do too well under the demands of Microsoft’s latest operating system, it works perfectly swiftly with the supplied Windows XP Tablet PC Edition. And on top of the integrated 802.11b/g wireless adapter, you also get Bluetooth thrown in as well, which means connecting to the Internet shouldn’t be too hard, whatever method you happen to prefer. 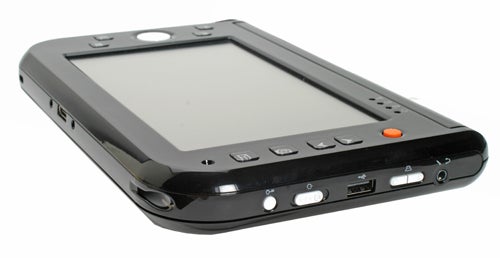 But of course the 701 isn’t without its problems. The first problem is the battery life, which by any stretch of the imagination isn’t wonderful. Under light use, with the wireless adaptors powered off, I managed to get it to last just two hours and 10 minutes. Under more intense use, watching video and browsing the Internet over a wireless connection, that time dropped to an even less impressive hour and 40 minutes.


Another major issue is that the outlet for the main cooling fan sits directly behind the left hand grip, which can lead to the system becoming uncomfortably hot to hold after a while. It’s even worse with the device plugged into the mains.

Secondary to these, but nonetheless irritating, is the fact that the two USB ports are situated on left and right edges, which means you can’t connect a thumbdrive or any other USB device while you work or browse – if you don’t want to keep reaching around them to reach the controls, that is. Also the 701 is a little heavier than the Q1, weighing in at 875g compared to the Samsung’s more svelte780g.


Finally, the 701 isn’t great when it comes to physical connectivity either. There’s no VGA output or Ethernet connection, so it isn’t particularly good out of the box as a replacement for your desktop, despite the fact that it comes with a plastic stand included. And neither does it have any expansion potential apart from the two USB sockets. There’s no PC card, ExpressCard or, more importantly perhaps, any kind of multimedia card reader.


The Ubiquio 701 is a bit of a mixed bag. It’s clear that a lot of thought has gone into the design of the thing. The controls have been well thought out and make the device easy to use – probably more so than Samsung’s Q1 and certainly more so than the smaller, lighter keyboard-equipped Sony UX1. I really liked the way every control fell to hand (or thumb) and was easy to access and understand.


But, alas, there are just too many negatives here to give the 701 a wholehearted recommendation. Battery life is average, physical connectivity is lacking and the heat dissipation issue is a serious negative. And though it is cheap for a UMPC, at £580 compared to £690 for the Samsung, it’s still not wonderful value when you consider how much you get in a budget laptop these days. 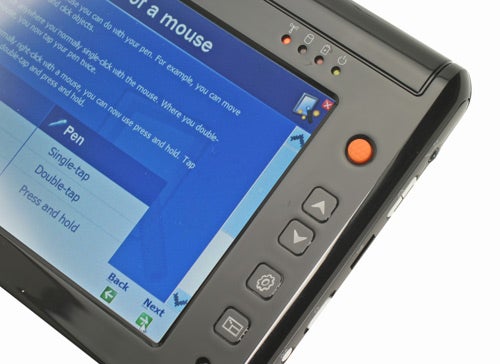