Skype is a wonderful thing. If you have broadband Internet it enables you to keep in touch with friends and family at long distance for nothing – if you call Skype to Skype. And you can make big savings on calls to overseas business contacts if you subscribe to the Skypeout service.


But it’s hardly the most convenient thing to use if you have to sit in front of your computer every time you want to make a call. Donning a headset and fiddling with microphone and speaker settings is also a pain, and you soon tire of not being able to wander around the house while talking. Most people use the system for occasional calls as a result – it’s just not convenient to do anything else – yet as products such as this Ubiquio 101 prove, it doesn’t have to be this way. 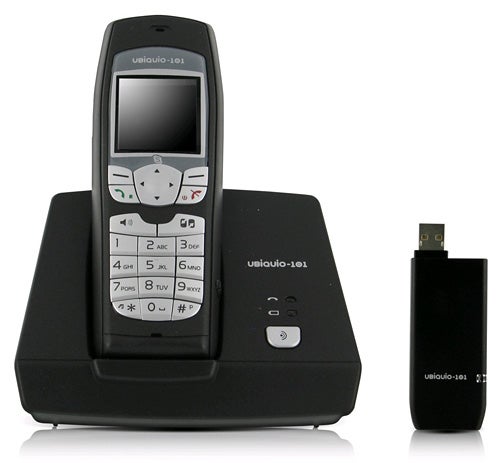 The idea behind the 101 is to combine two phone services in one device, making it as simple to make and receive Skype calls as it is landline calls. It’s not the first product to do this, by any means, but its price (£35) brings such features to the masses in a way that dedicated wireless Skype phones costing around £100 do not. Walk into an electrical store on the high street and you’d barely be able to purchase a decent DECT phone for this sort of money, so to get the Skype functions as well for this price is impressive.


And it does the job it sets out to pretty well. The handset itself is a rather unassuming; it looks like a normal DECT phone, in fact. And you connect and charge it in largely the same way you would a normal cordless phone. Just plug the base station into the mains and landline socket and you’re away. The handset is powered by a pair of AAA NiMH batteries (included). The key difference between this and a standard DECT phone is the small USB dongle provided in the box: slot this into a free socket on your PC or laptop, install the provided software and the phone will now be able to talk to Skype wirelessly in addition to its DECT base station for landline calls.


With the handset charged, you’ll find it’s as easy to use as it is to set up. The handset is small and comfortable to hold. It has a hands-free headset socket on the side if you want to use it while taking typed notes, for example. The keys have an attractive blue backlight, and are straightforwardly laid out with intuitive labels too; it’s obvious, for instance, which key to use to turn on the speaker phone function. A pair of ‘soft’ context-sensitive keys just below the screen make navigation around the phone simple, and I liked the fact that it has a colour screen – albeit one that uses the slightly smudgy-looking DSTN LCD technology.

Making calls on the 101 is a simple affair too. To make a landline call, you can dial a number as normal and press call, or use the handset’s 50-number phonebook. Skype calls are just one or two button clicks further away. Enter the menu system, select the Skype icon from the six options and, after a short delay, up pops your Skype contact list, complete with Skype-style icons indicating contacts’ status and availability. Select one, click call, and away you go.


For Skypeout calls it’s just as clear-cut. Dial the number you want (though it’s a bit of a pain having to add the international code on the front) and as you do so a context-sensitive button pops up at the bottom of the screen. Click this instead of the standard call button and, hey presto, you’re connected using Skypeout. If your Skype contact list is long, navigating it isn’t particularly swift, so the phone lets you jump to your contact’s initial letter by tapping it in on the keypad – as if you were writing a text. And the phone behaves exactly as you’d expect it to when calls are received. In fact if you didn’t know you were using Skype you wouldn’t be able to tell the difference. 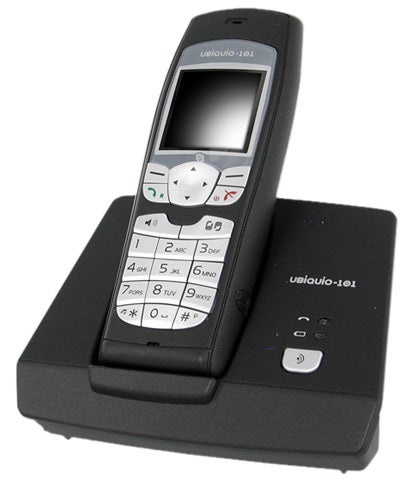 It’s not perfect though. Corners inevitably have to be cut to hit such a low price and the first casualty is call quality. This is acceptable, but it isn’t wonderful, and in comparison to a Panasonic DECT phone that I use day-to-day, voices on the 101 sound thin and reedy. Build quality isn’t fantastic either: the buttons are light and cheap and the plastic casing on the handset feels as if one or two drops is all it’ll take before cracks begin to appear. There’s no answer phone facility either.


Range is okay – about 30m or so with a wall in the way, but I’ve seen better. Again my Panasonic phone will give you a good 20m more distance before giving up the ghost. But the 101 does at least give you good warning before the signal dies – it bleeps loudly if you begin to stray out of range, well before the signal begins to break up.


The Ubiquio 101, won’t meet everyone’s needs. The lack of answer phone, slightly inferior call quality, and the fact that you have to have your computer powered on to make and receive Skype calls means it won’t be everyone’s cup of tea.


But for making simple Internet calls the 101 is spot on. It’s extremely easy to use – I’d wager if I set it up in my parent’s house even my mum could use it – and it’s fantastically good value for money. It’s an excellent choice if you want to make Skype calls and don’t want to be stuck in front of your computer.