With its latest networking kit U.S. Robotics (USR) has taken a couple of its old-timers and bundled them together to provide a complete broadband and wireless solution. The package consists of its USR9108 ADSL2+ Gateway and USR5421 USB wireless adapter with both products supporting USR’s MAXg technology, which claims speeds of up to 125Mbps.


The router is an imposing slab of silver plastic which provides the obligatory quad of switched Fast Ethernet ports along with an integral ADSL2+ modem. USR has never been tempted to play with MIMO so the wireless access point is endowed with a single aerial, whilst a USB port is provided for sharing a printer over the network. The USB adapter is of the same vintage as the router having been launched well over a year ago. It’s a chunky block about the size of a marker pen and the USB interface is on a hinged bracket so the adapter body can be positioned vertically. 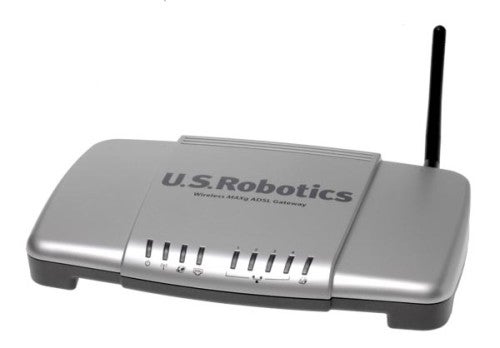 Router installation is handled by the bundled EasyConfigurator utility, which finds the router on the network and provides a quick start screen for entering details of your ISP. Selecting the country from the drop-down list automatically enters the correct VPI and VCI numbers so we just had to add our account details. That’s the theory but in practise we couldn’t get an Internet connection as the utility just refused to accept our account details. Only after we had reset the unit back to factory defaults and entered our credentials directly into the web interface quick start routine were we successful.


The management interface is a simple affair with easy access to the various functions. The status tab provides details on the interfaces with tables for the LAN, WAN and ADSL ports and access to the system log.

We would recommend upgrading the firmware as the review unit had a version that was nearly two years old. This is easy enough to do as the router checks on the USR web site and downloads the latest version for you although even this was over a year old. It is also worth noting that the resource CD-ROM offers a complimentary copy of Norton Personal Firewall but this is the 2005 version. 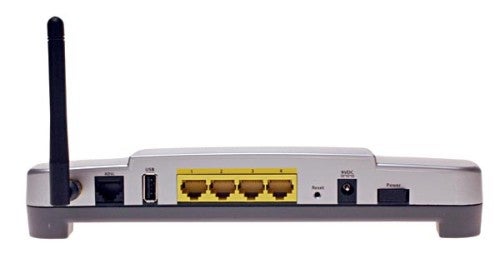 The router has a heavy focus on securing management access as you can create a list of IP addresses that are allowed to use the web interface. Options are provided for allowing or denying access to various services including FTP, HTTP, SNMP and Telnet for LAN and WAN users but these are only for blocking access to the router itself. If you disable HTTP LAN access this stops you from using the router’s browser management interface. We tried this and could still get in via a Telnet session but all we could do was restore the router’s default settings and start from scratch again.

For general Internet access controls you don’t get URL black and white lists such as those offered by D-Link’s routers. Instead, you can create up to sixteen entries that allow or deny all Internet access to listed MAC addresses. Schedules are applied to each entry so you can decide what hours each day a specific system is allowed to access the Internet. Inbound and outbound port filters offer more fine-tuning as you provide source and destination IP addresses and ports to block access to specific services. We were able to stop one test client from accessing FTP, HTTP and email services although these are permanent blocks and can’t be scheduled.

Virtual servers are also supported where you can redirect selected inbound traffic to a particular server on the LAN and you can place one IP address in a DMZ where it will sidestep the firewall for full exposure to the Internet. Testing with an Epson Stylus 950 we found printer sharing easy enough to set up following the instructions in the manual. However, if your printer uses a local status and ink monitoring utility you’ll almost certainly find it will no longer work.

For wireless security you get WEP and WPA/WPA2 encryption along with support for 802.1x authentication using an external RADIUS server. The router offers wireless QoS capabilities where you can prioritise traffic between source and destination IP addresses and port ranges. Alas, there’s a price to pay as this will only work if you switch off the MAXg setting.


The SureStart utility makes light work of the USB adapter installation and you get a useful utility which provides a site survey and details on the current wireless connection. As expected, performance is well below that offered by the latest draft 802.11n wireless products with a copy of a 690MB file over a close range WPA2 encrypted link delivering a modest 25.5Mbps. Moving our test laptop to the floor below the router saw signal strength take a tumble with speeds dropping by over 50 per cent.


After shopping around we found we could buy both kit components individually for less than £5 more than the kit price so USR isn’t offering much of a deal. Furthermore, wireless performance is modest at best and the router is short on features as well.

We had problems with the quick start routine as it wouldn’t accept our account details.

All Internet access can be blocked for specific MAC addresses and scheduled to be active between certain hours.

The print server is simple enough to use and the manual helps with installing a networked printer.

Don’t be fooled by this page as it only blocks management access to the router itself.

USB adapter installation is nicely handled and the utility keeps you posted on its general status.