The Typo 2 is a third-party keyboard accessory for the iPhone 6, but it’s no ordinary peripheral. A slightly odd back story, involving a celebrity and legal feuds, has helped thrust it into the limelight.

One of the founders of the company behind the Typo 2 is Ryan Seacrest, of American Idol fame. The company was also taken to court by BlackBerry after the launch of the original Typo, designed to fit the iPhone 5 and iPhone 5S. Seacrest and co obviously don’t seem to mind too much, though. 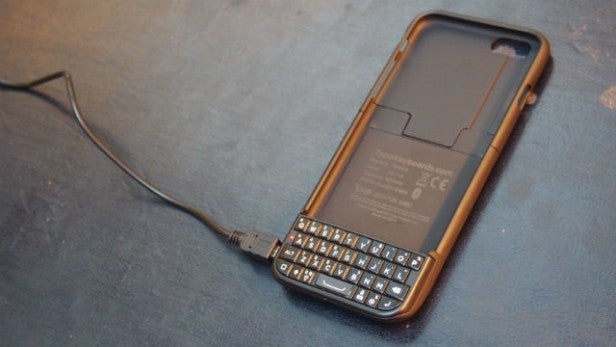 It’s easy to see why BlackBerry is huffing and puffing. Typo’s physical keyboards look very similar to the ones you’ll find on classic BlackBerry models, such as the BlackBerry Bold and BlackBerry Q10. It now seems to have evolved the design to make it look less similar, though the basic principle remains the same.

The first thing we noticed after unpacking the Typo 2 is that it’s quite an elegant little number. The entire case is made of matte-black soft-touch plastic, which is unfortunately prone to picking up fingerprint marks, while the keys themselves are small, shiny and packed tightly together in four rows. In terms of buttons, you’ll find a classic QWERTY offering with separate buttons for individual letters, along with a spacebar, backspace, return, Alt and Shift. Numbers and basic symbols, such as commas and colons, are integrated with these.

In addition, you’ll see a bunch of slightly less familiar keys flanking the spacebar, all marked with fairly self-explanatory icons. These are: home, backlight and keyboard lock.

A slight design flaw means that, from beneath, the circuitry and backlights are visible, but only when the case is empty. The company recommends topping up the Typo 2’s 180mAh battery every 7-14 days. 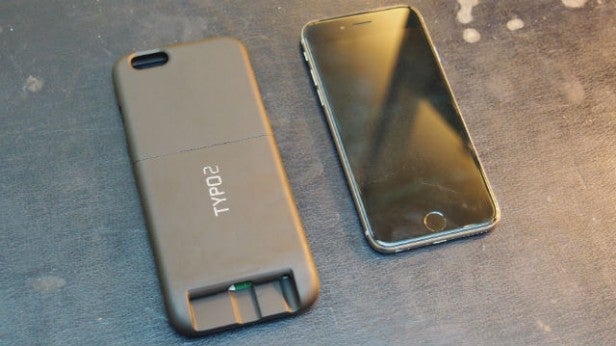 After charging the Typo 2 via the Micro USB port that sits on its left-hand side, setting up is easy. The case splits effortlessly into two pieces: the bottom section, which carries the actual keyboard, slides onto the lower portion of the iPhone 6, while the top section does the same to the phone’s upper half. Once interlocked, via two fairly flimsy tabs, the case fits snugly around the iPhone.

At this point, several drawbacks are immediately obvious. First, where’s the iPhone 6’s home button gone? Yes, the keyboard covers the home button entirely, rendering Touch ID – one of the iPhone’s most prominent features – completely and utterly useless. The home button on the Typo 2 works as an ordinary home button should, and brings up Siri too, but lacks fingerprint technology, which is a major blow.

Secondly, the case is excessively large and weighty. The Typo 2 sticks two fingers up at anyone who loves the iPhone 6 for its sleek frame. On its own, the phone measures 138.1 x 67 x 6.9mm and 129g. The Typo 2 adds about an inch to its height, making it just about small enough to fit into a standard jeans pocket. At its thickest point, the Typo 2 is about twice as fat as the iPhone 6 – the extra bulk is very, very noticeable.

What’s more, since the top of the keyboard sits right at the bottom edge of the iPhone screen, the bottom 3mm or so of the display is rather difficult to access with your digits. Loads of apps use this area of the screen as a dashboard of sorts, which makes this another rather big issue. The sides of the case are a touch too thick, too, so that the physical power and volume buttons are a little hard to get to, despite perfectly sized cutouts. 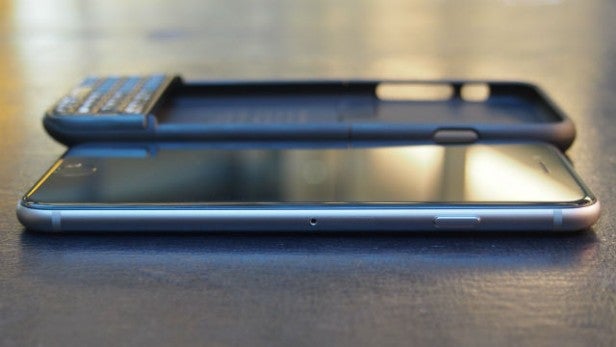 Pairing the Typo 2 with the smartphone via Bluetooth is quick and straightforward, and a handy user guide included in the packaging explains how to use the various buttons (or combinations) to maximum effect. Unfortunately, the Bluetooth connection puts a large strain on the actual phone’s battery, and we found power levels decreasing quickly.

Typing is typically quicker on a physical keyboard than on a digital one, and the Typo 2 keeps up the tradition. My fingers have a long history of being rather clumsy – learning to play a short excerpt of Camille Saint-Saëns’ Danse Macabre on the keyboard took weeks of practice at school – but the Typo 2 is easy to use.

The spacebar is the only button on the Typo 2 that lies completely flat, with all others sticking out at a slight angle, making it easier for your fingers to distinguish individual keys. The odd typo aside, the dinky little buttons are easy to navigate and speedy to type with, and make a lovely little clicking sound when they’re pushed. However, apparently not everyone is a fan of the noise, with one TrustedReviews member of staff likening it to lots of knuckles being simultaneously cracked.

What isn’t so quick is the backspace function. Holding it down doesn’t speed up deletion, so you’ll have to be patient when erasing your errors. 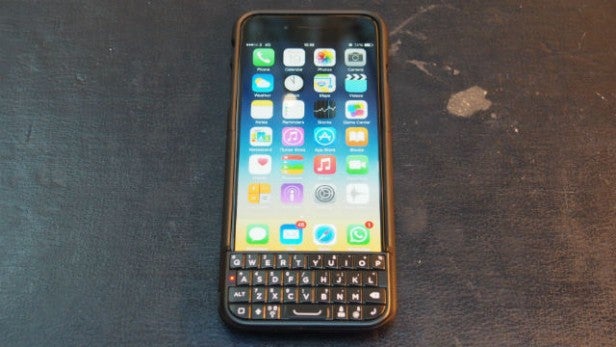 Caps and alt lock are easy to get your head around, and locking the entire keyboard is simple enough, though you’ll have to remember to do this every time you lock your iPhone, which is a hassle. If you forget, your pocket will almost certainly press a few keys for you, and you’ll run the risk of accidentally locking yourself out of your phone by entering a load of incorrect passcodes. The backlight is nice and strong, but the keys remain lit for about 15 seconds after the phone is locked, which is another thing to get irritated about.

There’s a entire key dedicated to world currencies but, bizarrely, it only offers up $, Yen, # and the trademark symbol, despite the fact that the Typo 2 is also targeted at UK consumers. Since this is a product apparently designed to function as an “indispensable business tool”, failing to bring basics like £ and € to the table is quite the oversight. Bankers, lawyers and other such high-fliers would not be impressed. Fortunately, it’s easy to unpair, so you can still fall back on the phone’s own native, digital haul of symbols.

Should I buy the Typo 2?

I was rather looking forward to using the Typo 2 keyboard for the iPhone 6, but it’s left me thoroughly disappointed. While it certainly makes a strong visual impression and its physical keys enable you to type more quickly, the benefits it brings are vastly outweighed by the drawbacks.

It’s large, heavy and a little bit of a nuisance. Having to disable the keyboard every time you lock your iPhone is a real pain in the backside, and the hardware restricts access to the volume and power buttons, as well as the bottom part of the display. 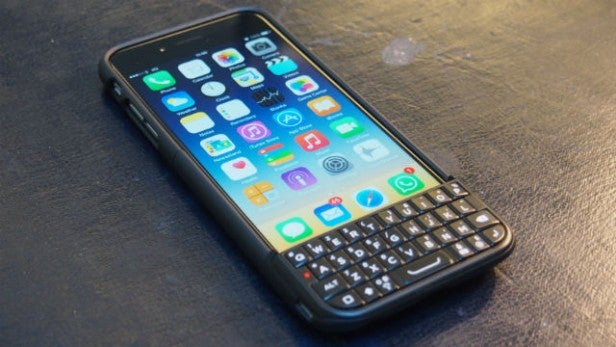 If you really, really want to supplement your iPhone with a BlackBerry-style physical keyboard, and have a spare wad of cash lying around, go for it. Otherwise, don’t. It’s not worth $99. Alternatively, go buy a BlackBerry.

A nice idea, but the drawbacks outweigh the positives.