The TVonics DTR-Z500HD is a PVR equipped with Freeview+ HD and two tuners ready to pipe HD terrestrial programmes to your TV. Freeview HD is still in its infancy, but if you don’t want to fork out for a Sky HD subscription, this could be one of the best ways to join the HD television club.


TVonics is that rarest of things – a British technology manufacturer. It hasn’t gained quite the level of acclaim of Humax or Topfield among PVR fanatics, or the mainstream recognition of giants like Panasonic and Sony, but it has produced some great boxes over the last six years, like 2009’s DTR-HV250.

The TVonics DTR-Z500HD is the company’s second Freeview HD PVR, and is a more sobre-looking alternative to the similarly-specc’d DTR-HD500. It’s a generously curved rectangular block, a shape used for several previous TVonics boxes.


Shiny and black, it’s less stylish than the DTR-HD500, and we can’t help but wish TVonics had moved its front-USB slot around the back, or put a cover over it. The front logos detract from the simplicity of the design too – while it may be useful for the TVonics DTR-Z500HD to look striking on the shelves of a high street electronics retailer, brash and bold aren’t the descriptors we tend to want to attach to our home’s AV equipment. 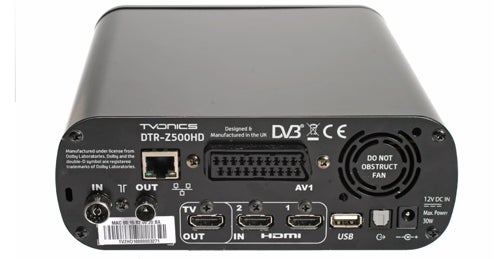 Its design is still less imposing than full-sized rivals like the Humax HDR-FOX T2 though, dinky enough to retain that quirky, gadgety look missing from the rather anonymous look of most AV separates. It’s a near-perfect match for the slick black looks of Samsung’s LCD TVs, if you’re into matching-up the finishes of your home cinema setup.


The USB port, used for software updates and photo viewing, is the only socket on the front of the DTR-Z500HD. Around the back there are the HDMI and SCART video outputs, optical audio output, aerial in and out sockets, Ethernet port, another USB socket and two HDMI inputs.


These two HDMI inputs let you plug two other devices into the PVR, effectively making it double-up as an HDMI switch. This is particularly effective if you’re plugging in games consoles or other devices without traditional remote controls, making the DTR-Z500HD the centre of your home setup. They’re not HDMI 1.4 slots though, so they can’t pass-through 3D content unfortunately.

You can’t record the signal from these inputs onto the PVR’s hard-drive though, a limit of HDMI’s digital restrictions as much as anything else. Recording is limited to the two Freeview tuners here. There’s a 500GB hard drive built-in, and while the more intrepid among you may be able to upgrade this yourselves, the box needs to be taken apart completely to get access to the HDD.

The DTR-Z500HD uses the same interface that’s been packed into TVonics boxes for years. It’s simple, intuitive and offers five different colour schemes – some a little garish, all very clear.


The focus on ease of use means that some features are slightly hidden away from view, but the near-minimalist approach to the UI makes this PVR a joy to use. There’s virtually no learning curve to scale here, so technophobe users shouldn’t have any problems as long as they’re familiar with using a Freeview EPG. 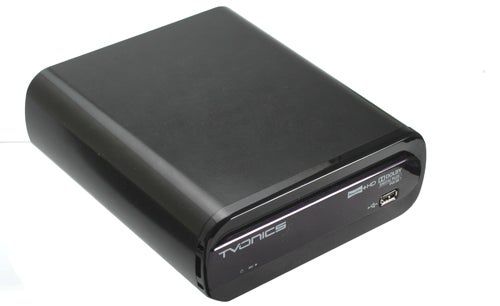 This approach demands the occasional extra click from more advanced users though. For example, there’s a search function in both the library and electronic programme guide, but to access it you have to press the fast forward button to scroll through the functions mapped onto the coloured “Freeview” buttons. TVonics started out its life working with the UK government as part of its digital switchover plans, and the demand for accessibility that’s innately part of this is still here to see in the DTR-Z500HD’s interface.


With two Freeview HD tuners on-board, the PVR can record two channels at once or watch a channel while recording another. Unlike some PVRs, you can’t seem to record two channels and watch a third broadcast as part of the same multiplex. Try to change channel while already recording two and the DTR-Z500HD will prompt you to either cancel one of the recordings or return to watching one of the programmes currently being recorded. 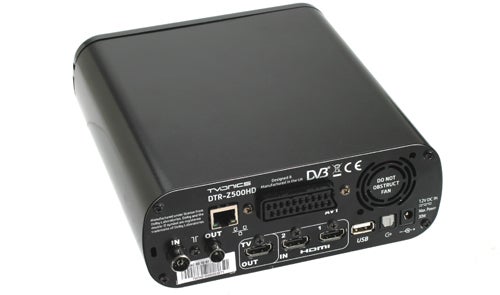 Picking a programme to record is, as usual, a case of simply tapping the remote’s record button while watching a programme or browsing the 8-day EPG. Each time you start a new recording, a prompt screen pop-ups that lets you select a series link recording with a simple press of the blue Freeview button. Series link is a standard feature of Freeview+, but this ultra-intuitive integration of it is a bonus.


Over the period of a week, we set the DTR-Z500HD to recording a slew of programmes, both HD and standard definition, and it didn’t miss a beat. It has no problems recording two HD channels at once and the 500GB hard drive has enough room for around 250 hours of SD content. Typical of its simple interface, the library screen – housing all your recordings – doesn’t tell you how many megabytes each recording is taking up. It’s all about minutes rather than megabytes here, which may annoy power users recording a mixture of SD and HD content looking to free-up some space. 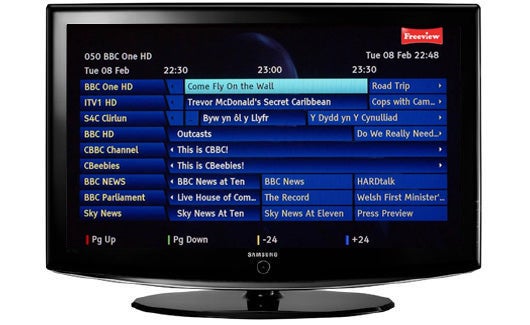 When connected to your TV over HDMI (and if you’re going to be using SCART you should not buy this box) the DTR-Z500HD upscales SD content. You’re given no control over the level of digital noise reduction processing going on in the background, but it does a good job of dealing with Freeview’s lower-quality broadcasts. There’s still significant mosquito noise visible around text and other defined areas of detail, but motion of more organic objects is very well-handled. Its processing appears less aggressive than the PlayStation 3’s PlayTV tuner, but the resulting images are natural and very watchable. 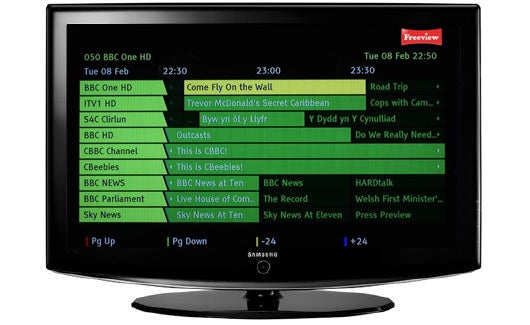 HD content is also well-handled. Not all of Freeview’s HD content is going to inspire “ooh”s, packed as it is with the low-budget lifestyle filler that’s broadcast on most TV channels, but a standard benchmark of HD content, the nature documentary, looked fantastic. With detailed and vivid images, the DTR-Z500HD has what it takes to show what Freeview HD has to offer. It had no problems picking-up all four channels currently available in the London area – BBC One HD, ITV 1 HD, 4 HD and BBC HD.


Another crucial win for the DTR-Z500HD is operating noise. Although it gets warm to the touch during use and has a fan port at the back, it’s virtually silent. You can hear the slight click of the hard drive during recording, and a slight whirr from the fan, but only if you get your ear within 15cm of so of the box. In normal usage, you won’t hear a thing.

The TVonics DTR-Z500HD is a PVR that has the basics nailed down, but doesn’t offer a great deal of filler features. It supports Dolby Surround in HD content, and downmixing to Dolby Digital and plain old stereo; it also has PIP (picture-in-picture) letting you watch another letterboxed channel in four different positions at each edge of the screen. That’s about it, though.


The USB image viewer can’t handle particularly large files, failing to register them at all, and the lack of any video playback over USB feels like a missed opportunity – there are two USB slots but all they’re really useful for is the occasional software update, which can also be grabbed over-the-air anyway according to the box’s menu system. Recordings can’t be transferred easily to a computer either, so once you’ve filled-up the 500GB hard drive, your only option is to get deleting. 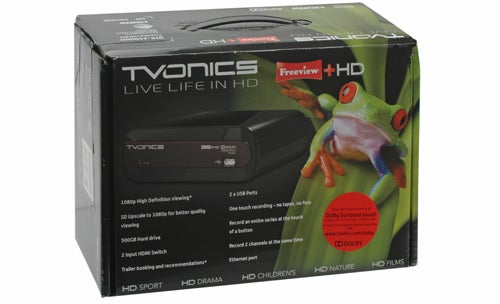 Attempting to cram in these extra features often brings with it bugs and reliability issues though – the worst of which can lead to a PVR losing your whole library of recordings. In our test period, the TVonics DTR-Z500HD was reassuringly reliable. There was a single case where the entire signal was lost, and recorded programmes refused to play, but this was fixed with a simple reset. In spite of our best efforts to trip-up the software, we couldn’t recreate this bug afterwards. Aside from this trip-up, there were no crashes or freezing. Speed of navigation within menus is predictably a lot slower than the PS3’s PlayTV Freeview accessory, but is otherwise on-par with other premium-price PVRs from Humax and Sony. 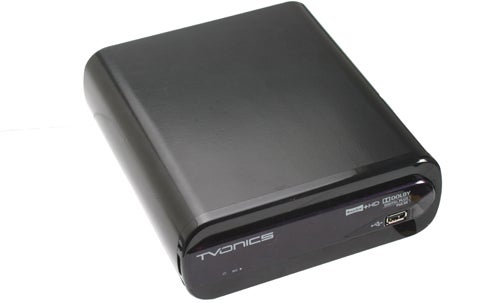 It’s early days for the Freeview HD PVR. Bigger-name rivals like the Humax HDR-FOX T2 and Sony SVRHDT500B sell at a significant premium – the best part of £100 more than this TVonics solution. You can bet that rivals coming in the next 6-12 months will offer features the DTR-Z500HD doesn’t have, like recording transfers, DivX playback and access to the BBC iPlayer, but what’s included here is only ever held back in quality terms by the limitations of the Freeview stream itself – HD or otherwise.

Reliable and blissfully easy to use, the TVonics DTR-Z500HD is one of the best-value Freeview HD recorders available. It misses out on a few high-end features, but if you have a home setup consisting of just a couple of other HDMI-equipped devices resting under your TV, it’s a makes a great headquarters for your entertainment rig thanks to the built-in HDMI switch.