The DTR-HD500 is the first Freeview HD product from UK-based manufacturer TVonics, which has already established itself as a dependable purveyor of attractive, user-friendly digital TV kit. It’s a 500GB HDD recorder with twin Freeview HD tuners, allowing you to watch one channel while recording another, or to record two channels while watching a previous recording. But the main reason you’ll want to check it out is its ability to receive BBC HD, ITV1 HD and Channel 4 HD without any pricey subscription fees or installation costs.

TVonics has come up with a very arresting design for the DTR-HD500. In fact, we’d go as far as to say it’s the best looking Freeview receiver we’ve ever encountered. TVonics seems to have taken a leaf out of Samsung’s design book, with a deep, sexy gloss black finish and a curvy, elegant casing that slopes downwards towards the front. The transparent trim around the edge of the top panel is a lovely touch, and there are no buttons at all, which makes it delightfully minimal – aside from the numerous logos dotted along the front.


Set into the top panel is a row of blue LEDs that show the current channel name and number by default, but can be changed to show the time or turned off completely. When you first change channel it scrolls to reveal the channel’s full name.

Tucked down one side of the unit you’ll find a USB port (more on that later) while the rear panel is positively teeming with connections. Most importantly you get an HDMI output for piping those crisp HD pictures to your TV, but a nice bonus is the inclusion of two HDMI inputs that turn the TVonics into a basic HDMI switcher. Both inputs are specified as v1.3, which means you can pass HD audio bitstreams from your Blu-ray player through the DTR-HD500 to an AV receiver – you even get an HDMI lead in the box.


Joining these are an Ethernet port for accessing IPTV services and making software updates but sadly not for networking functionality. You also get a second USB port, an optical digital audio output, an RGB-capable Scart output, plus aerial input and output (loopthrough) sockets.


After plugging in your aerial and turning on the recorder, the first thing it does is scan for channels (which it does very quickly) and confirms your country and region. After that you’re ready to go.

The DTR-HD500’s external design is gorgeous but the onscreen interface is less lavish, which is understandable given TVonics’ user-friendly ethos. The main menu is a straightforward yellow, green and black box, listing the various options clearly. Among its options are Edit Channel List, where you can hide or sort channels in the order of your choosing, as well as Tuning, Service and Parental Control sections. 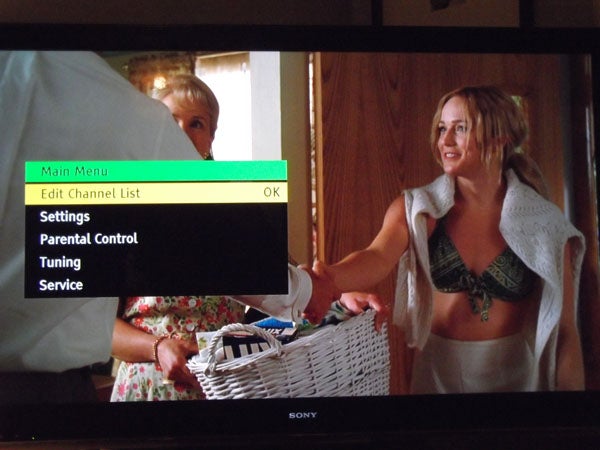 Under Settings you can change the HDMI output resolution (576i/p, 720p, 1080i, 1080p) or select Auto to allow the box to select the right resolution for your TV. The unit will upscale SD programmes to HD resolution, including anything you feed into the HDMI inputs. Oddly, when we passed the signal through our AV receiver we weren’t able to watch HD pictures – the only options available were 576p and Auto, which meant we had to connect it directly to our TV’s HDMI input. 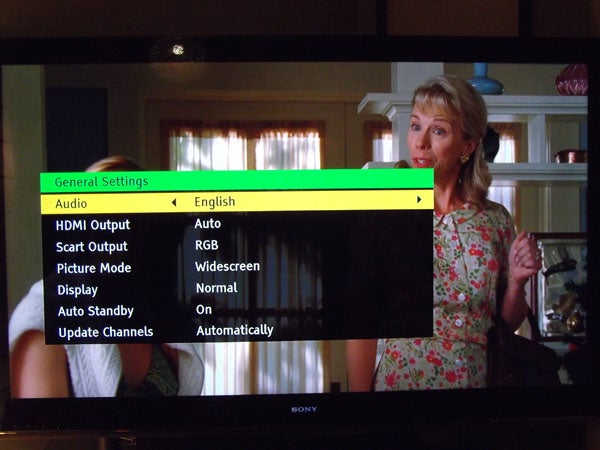 The setup menu also lets you set the pause live TV buffer memory to one, two or four hours and choose the audio downmix settings – there’s a choice of Dolby Digital, Dolby Surround, Stereo or Automatic.


However, the Dolby multistream decoder built into the DTR-HD500 isn’t yet enabled. In mid-October TVonics will release a software update that will not only allow your DTR-HD500 to transcode HE AAC audio to Dolby Digital – making it compatible with all AV receivers – but in the future it will also be able to decode premium broadcast audio formats including Dolby Digital Plus, Dolby Pulse, Dolby Digital and all AAC bitstreams. At present, most AV receivers can’t decode HE AAC directly, but this update will allow you to enjoy discreet 5.1-channel broadcasts where available and, if your AV receiver also has Dolby Pro Logic II, you’ll be able to get surround sound from stereo broadcasts too. 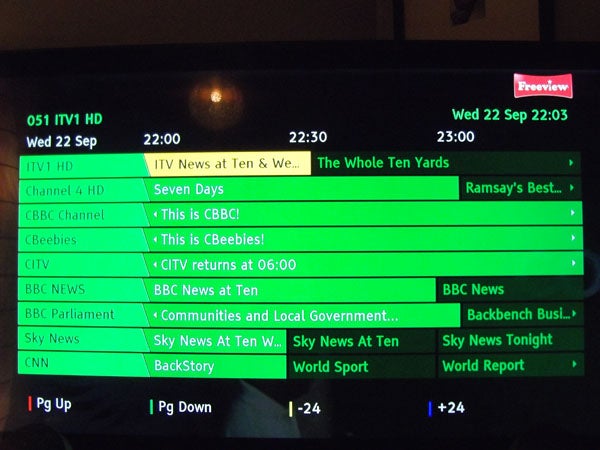 Onto the 8-day EPG, and the fullscreen layout is certainly easy to follow, but its use of bright green and yellow blocks isn’t particularly easy on the eye. It shows nine channels at once, the text is nice and big and there’s enough room to show most names in full, while along the bottom you get some handy colour-coded shortcut keys like +/- 24 hours and page up/down. It’s occasionally sluggish when skipping between programme blocks.


The DTR-HD500 supports accurate/alternate recording and series link, all of which are a breeze to use. For series link, highlight your desired programme in the EPG, hit the record button and a confirmation screen appears. Then if you want to record the series, simply hit the blue button.

There are some other new features on board that make it even easier to record your favourite programmes. These include trailer recording, which lets you set the timer for a forthcoming programme as its trailer is being shown, plus recommendation technology that allows broadcasters to make suggestions based on what you’ve already recorded. 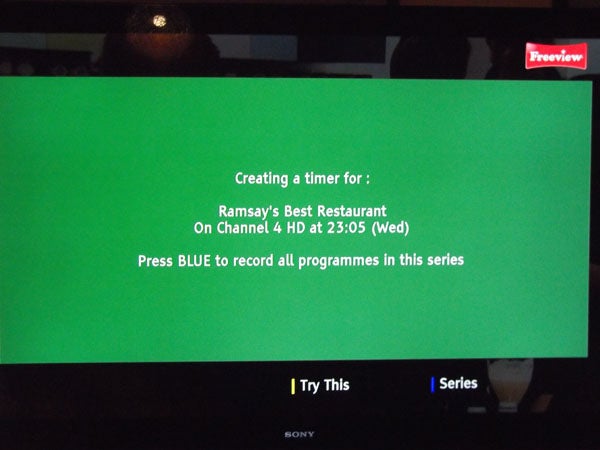 For the former, a green symbol appears onscreen during the trailer prompting you to hit the green button and select the programme you want to record. The latter feature appears in a menu at the bottom of the screen when you try to record a programme containing the relevant flag. The unit will also tell you if an SD programme you’re recording is being shown in HD. 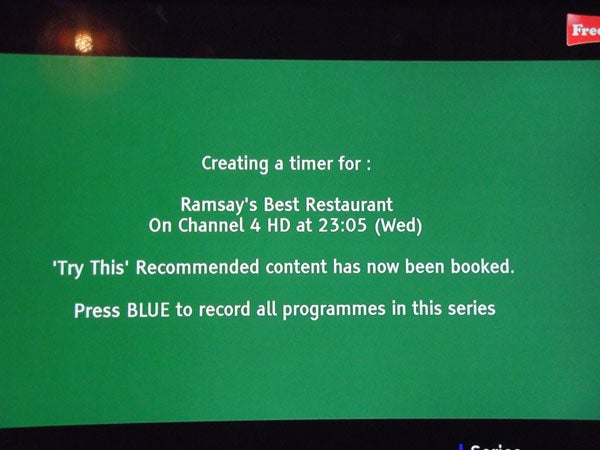 Recordings are stored in the Library – a basic list showing the name, date, duration and a tick symbol indicating which recordings have been viewed, but thumbnails would have been nice. You can sort, delete or arrange playlists from here. The 500GB capacity holds up to 70 hours of HD recordings or around 255 hours of SD ones. 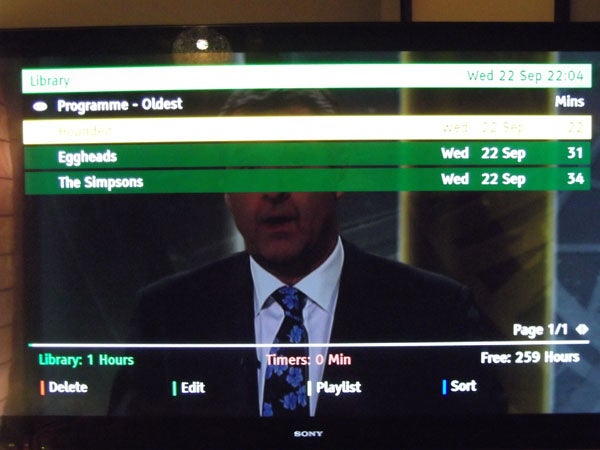 It’s pleasing to see that the onscreen ‘Info’ banner allows you to browse the next few days’ worth of programmes on any channel without you having to enter the full EPG. On the downside, details about each programme are fairly limited – there’s no info about the audio format or whether it’s native HD or not, which would have been useful. 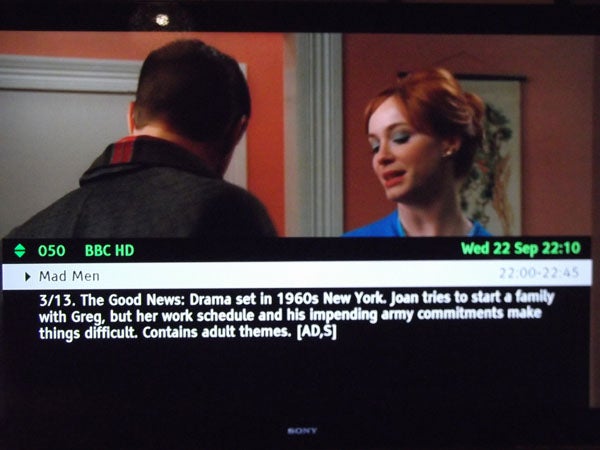 Other features include picture-in-picture, audio description, subtitles, pause and rewind live TV, while the USB port on the side allows you to plug in a camera, card reader or flash drive and view JPEG photos. MP3 and DivX playback would have been handy but their absence isn’t a deal breaker. 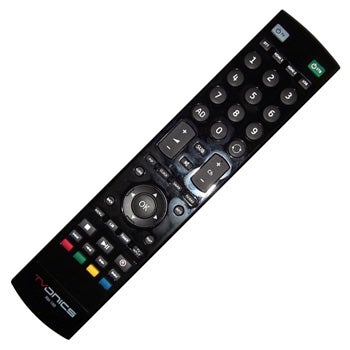 TVonics’ predilection for simplicity means the remote is easy to use, with large rubbery buttons, while the gloss-black finish is fetching. The various inputs can be selected using dedicated buttons along the top while the placement of the menu control and playback keys is ideal. Our only gripe is that some of the important keys for calling up the Library and Guide are far too small.

From what we’ve seen so far, the DTR-HD500 is an impressive recorder, with features aplenty and a simple (if garish) operating system, but its picture performance lets the side down. Standard definition channels like Five USA and ITV1 are particularly disappointing, beset by mosquito and block noise that makes them look distinctly gauzy, and these are visible no matter the output resolution. Sadly, these artefacts are also captured on HDD recordings. 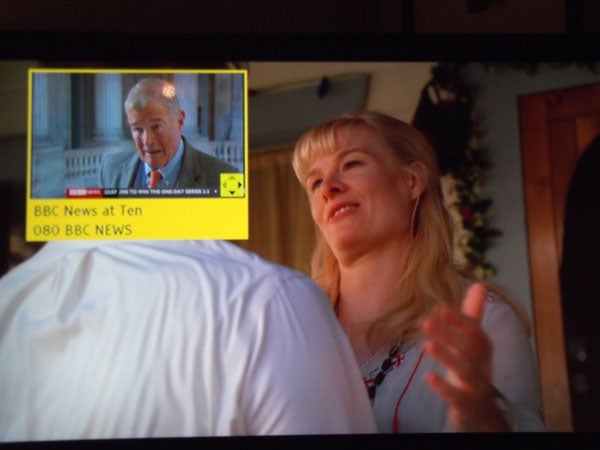 For example, there’s an advert for Marks & Spencer on ITV1 showing various models cavorting with umbrellas in the rain – this looks an absolute mess, with the pelting raindrops causing the picture to break out in horrendous block noise and shimmering. Elsewhere there’s significant mosquito noise circulating around the edges of most moving objects – particularly noticeable around the heads of the ”Loose Women” in front of brightly coloured backgrounds. On the plus side, colours look strong yet natural and movement is smooth, which at least keeps pictures watchable, but that noise might be too much for some viewers to swallow.


To be fair to the DTR-HD500, we watched its pictures on a 60in Sony LED set, which is unforgiving with Freeview broadcasts, and SD Freeview channels are fairly ropey anyway, but even still, other receivers have delivered cleaner, sharper pictures on this TV – the Sky+HD box being one. The above-mentioned M&S advert looks clean and stable through Sky’s receiver.

However, turn to any high-definition channel and noise is much less of an issue (although it’s still present), which means pictures shine with eye-poppingly sharp detail, absorbing depth and radiant colours. This incisive detail reproduction and lack of noise allows you to see the dirt and mess inside Steve and Becky’s flat during BBC HD’s ”Him & Her” in all its disgusting glory, while shots of opera performances and ”The Proms” are exquisitely rendered.


These HD pictures are certainly impressive, but as HD channels account for four per cent of the total channel line-up it’s not enough to let the DTR-HD500 completely off the hook. Sonically we can’t fault the unit though, but it’ll be interesting to see how this sound quality survives the HE ACC to AC3 transcoding process.


Despite its flawed picture quality and hefty price tag, the DTR-HD500 still impresses on many levels. First of all, TVonics has made a huge effort with its design, crafting one of the most attractive Freeview receivers on the market. Its straightforward onscreen menus and remote make it exceptionally ease to use, while the range of recording features and digital TV functionality leaves virtually no stone unturned. What a shame, then, that standard definition pictures look so messy – a little more care in the MPEG-2 decoding department and we could have had an absolute killer product on our hands.