No matter how many strange products we get through the doors here at TrustedReviews there’s always something stranger ready to pop up and baffle us some more. I think, though, that for pure surrealism the Tux Droid is going to be pretty hard to beat. Now it’s hard to deny that some Linux fans can be pretty evangelistic about their operating system of choice but I wouldn’t have thought that that religious dedication would extend so far at to want an idol of the Linux mascot, Tux the penguin, sitting on one’s desk.


Apparently, though, I am mistaken because that’s exactly what is sitting in front of me right now, and it’s not just an effigy of the much-loved penguin, but a wirelessly connected moving speaking robot of sorts. More curiously, unlike most every piece of hardware on the planet, rather than having to hunt for hours on end to find a Linux driver, you’ll discover that that only Linux users can use the Tux Droid as Windows drivers aren’t available.


This may not seem like a huge issue (what Windows user wants a figure of the Linux mascot on their desk?) but it is a pain when you don’t have a Linux machine to hand in order to properly test the dratted thing. It was therefore necessary to go through the fun business of setting up a system with Debian – not a task for the faint hearted. Still, mere days later I had my PC dual booting with Vista and Linux and it was time to have a play with Tux. 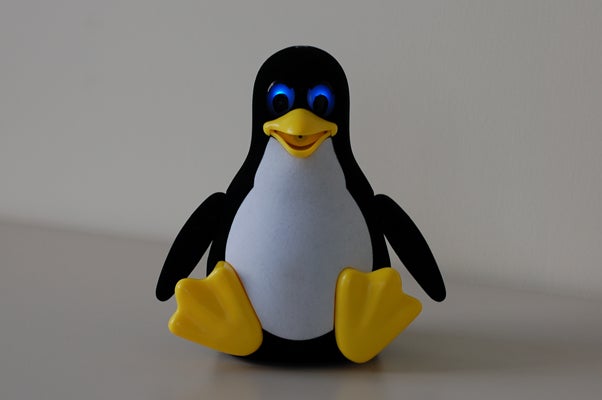 Installing the droid is a pleasantly simple affair if you are already a Linux user. If you’re running on Debian or Ubuntu (a Debian derivative), you can simply download the .deb installer and run it to get the main drivers and program set up. If you’re running any other flavour of Linux you’ll need to jump into the terminal and do things the old-fashioned make install way. Whichever, the process is hardly complicated and once finished you simply need to plug in the included fish-shaped wireless transmitter dongle, turn on Tux, set your system to output sound over USB and hey presto you’ve got yourself a penguin shaped wireless speaker.


Of course that isn’t particularly impressive, but luckily for Tux he’s got a few more tricks up his sleeve. Being built on a Linux platform means that a whole host of open source applications are available to be assimilated into the Tux Droid software suite and I don’t know about you, but when I think “wireless penguin shaped speaker” I also think “text to speech” and the developers of Tux are similarly minded – as evidenced by the inclusion of the Acapela TTS codec. To get started using this feature you’ll first have to download your chosen voice from the Tux Droid website; at the moment there’s a reasonable selection of languages and more are being added all the time.


Having installed these voices, the quickest and simplest way to get going with some TTS fun is to fire up the tuxgi test application (from the Terminal – so you’ll probably want to make a shortcut) and simply type in your text to have Tux read it out. As well as this you can also test out the various moving appendages of Tux, making him spin left or right, flap his wings, flash his eyes and move his mouth. The latter is best used in conjunction with the TTS functionality and may even fool the casual observer into thinking you have a real talking penguin. Or perhaps not. Still, once you’ve tested your new toy you’ll want to move onto the real purpose of Tux, namely the software packages supplied for use with it.

It would be wrong of me to say that the programs built into the Tux Droid are going to revolutionise the way you use your Linux-based PC but it could make it more entertaining. Programs, once downloaded, are installed simply by dragging the file onto the Gadget Manager interface and clicking “yes” when queried as to whether you’re sure you meant to do so. More gadgets are being developed all the time (I have my eye on one which will turn Tux into a Skype phone) and you can use the provided Python API to make your own should you so desire. Usefully the Gadget Manager can be navigated using a supplied remote control, the problem with this being that for some programs you’ll still want to see the GUI so using a mouse is quicker and easier.


First off I decided to test the email Checking gadget which does exactly what one might expect. Simply punch in your POP (no other protocol is supported) account details and set a delay and the Gadget Manager will periodically ping your account and either let you know you have no new messages or notify you that you do. There are several options for this, ranging from either a single beep to having a TTS readout of the sender and or subject line of any new messages – something which caused a good few minutes of entertainment in the office. Fear not if you use Google Mail as you’re also accommodated for with a separate mail checker specifically for Gmail. 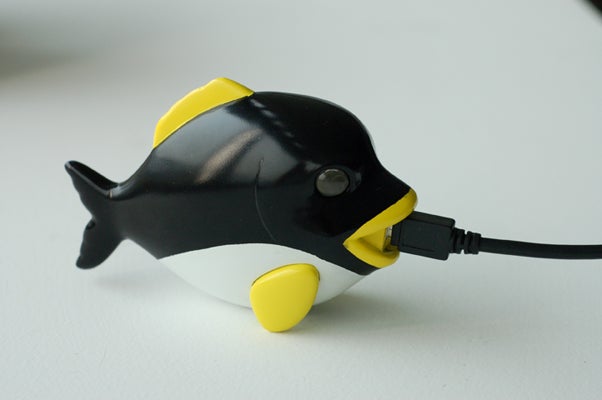 Other programs include a weather checker, which will read out the local weather as specified in the gadgets configuration, XMMS, Audacious, Amorak and Totem media player control interfaces (again, using the remote control) and an on-the-fly TTS translator. The latter tool is based on an open source dictionary database, so you’re relying on other people (or yourself of course) to keep it accurate and up to date, but isn’t that what Linux is about?


Another potentially fun Gadget is the alarm, despite having the slight flaw of needing your PC to be turned on, which can be configured in many ways. Notifications can either be in the form of crazy flashing eyes and WAV files, or a TTS notification of your choice. Either way it’s definitely loud and annoying enough to wake up even the deepest of sleepers. Aside from the official plug-ins various user made gadgets should also start popping up once a decent community of Tux Droid owners gets going, should that ever happen.


The only real problem with Tux is the £89.95 asking price. Most of us in the TR office feel this is disproportionate to what you’re getting especially as, when all’s said and done, the Droid itself is just a wireless speaker with a few flashing lights and flapping wings with some reasonably clever software. While the Tux Gadget Builder and Manager programs do a good job of simplifying the process of interfacing Tux with various other programs, doing so requires a level of programming ability which would probably only be possessed by someone capable of getting the same functionality without the cost of the Tux Droid.


In the end I can’t help but feel that the Tux Droid would be far more attractive was it only half its current price. Sure it doesn’t do anything particularly special, but as a Linux-orientated novelty item it serves its purpose. The programs work, the setup process is admirably simple for Linux and the number of programs is increasing both in terms of the sheer number available and usefulness. If a reasonable community of coders gets behind the droid then the potential is huge to turn it in to a decent bit of kit, for now though not one that can be recommended except as an expensive toy.