What is the Turtle Beach ZSEVEN?

The Turtle Beach ZSEVEN is the company’s flagship PC gaming headset that costs a whopping £229.99. It packs in plenty of features for the cash, though, with Dolby virtual surround, a dedicated audio control unit and a whole host of connectivity options. Unlike the Turtle Beach Z300, it’s not a wireless headset, but if you’re looking for the ultimate wired gaming audio experience then you may want to add the ZSEVEN to your short list. 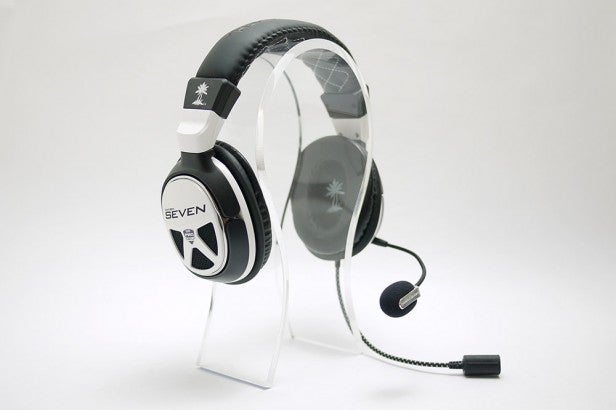 One thing you probably won’t be buying this headset for is as a fashion accessory. It’s not offensive to the eye, but it isn’t sleek and modern in a Beats by Dr Dre way and lacks the ‘form over function’ vibe of the Steel Series H Wireless or a set of Grado headphones.

Still, it’s a very well put together headset. It’s all plastic but has a real solidity to it with thick chunky parts used throughout. The headband in is hefty and well padded, as are the earcups and both are finished in real leather (well, the inside of the headband anyway). 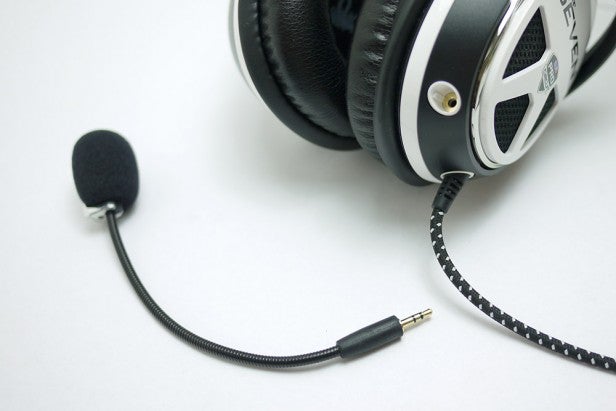 A rather superfluous extra is that you can remove the earcup covers to replace them with ones of a different colour, but these don’t seem to be readily available anywhere to buy.

The flexible boom mic is fully removable – unlike the Z300 that leaves half the arm behind – but the main audio connection isn’t. Instead it has an 8-inch length of cable terminating in a custom 6-pin mini-DIN connection, which you can then connect to either the 1m or 1.4m extension cable. It is good to see some sort of modularity so that it’s at least easy to replace the cable if it gets run over by an office chair, for instance, but we always prefer to have a completely removable cable, with a standard jack socket. 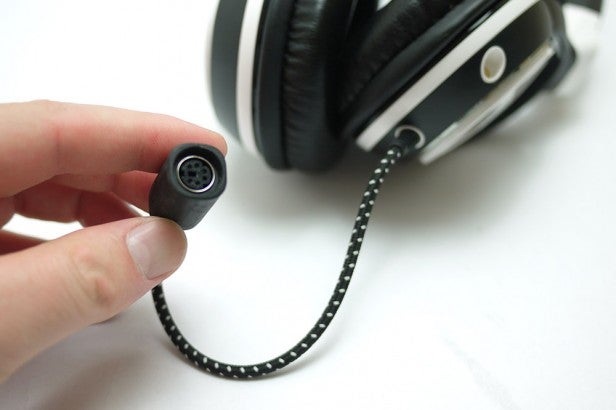 Although touted as a surround sound set of headphones this set just uses two 50mm drivers – one for each ear – and instead relies on Dolby’s virtual surround sound technology, more on which later. 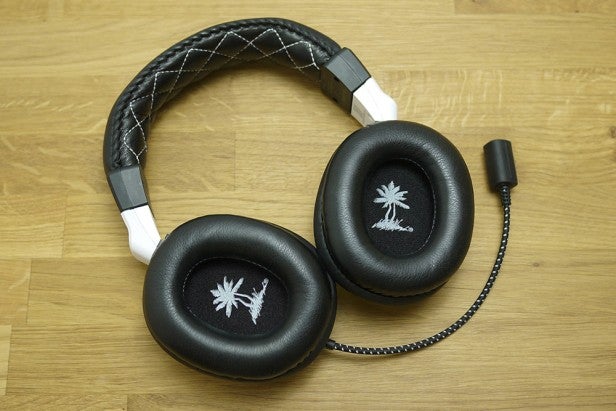 The audio control unit (ACU) is both the main connection hub for the headset as well as its sound card. Connecting via USB to your PC, it also features sockets for Xbox 360 chat feed and an auxiliary analogue sound source, as well as volume controls for chat, auxiliary audio, overall audio level and even a volume dial that’s programmable.

And we’re not even half way done yet. Surrounding the main dial in the centre – which is the main volume control – are touch sensitive buttons for muting the mic, turning on surround sound, adjusting the relative volume of the surround sound ‘speakers’ and more. Meanwhile below this are eight more touch buttons for setting for the headset’s tone – flat, bass-heavy, treble-heavy etc. It really is a quite bewildering list of features. 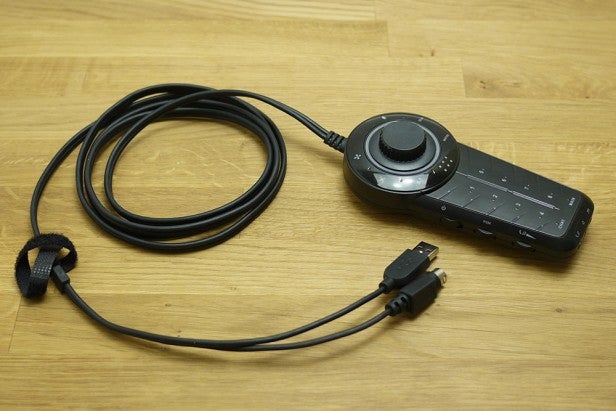 Before we delve into what these all do, first a word on the design of the ACU. To put it bluntly, we don’t really like it. For some reason it’s styled as though it could somehow be worn, with a large clip on the back and a low-profile, elongated shape. We also don’t approve of the tethered main USB cable. It seems to us that a more conventional ‘desktop’ design with the connections on the rear and a proper display and menu system, would serve much better – just like that of the Steel Series H Wireless in fact. As it is, for a conventional PC setup, the ACU doesn’t really feel like it has a convenient place on your desk.

As well as the headset, PC speakers can also be connected to the ACU, and there’s a mode button on the side that switches between the two output options. Only stereo speakers can be connected, though, so you can’t augment the virtual surround headphones with true surround speakers. 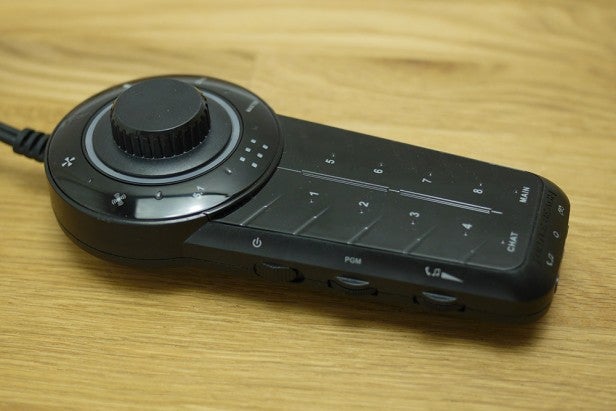 Other usage options include connecting the headset straight to a portable device where it simply functions as a standard stereo headset. If you’d like to use this setup with a console you’ll need to get the even pricier (£249.99) XPSEVEN headset, which includes an extra interface box for connecting to these devices and integrating chat functionality.

The full range of setup options for the SEVEN series range is shown below.

Complicated and multi-functional the ZSEVEN may be but credit must go to Turtle Beach for providing a very comprehensive user manual to guide you through the setup process. Every single moment of head-scratching – and there were a few – we could resolve with another read through.

The first thing we noted about the Turtle Beach ZSEVEN’s was just how tight the headset is. The headband is very much on the hold-on-for-dear life end of the grip-levels scale with it almost a struggle to get the things on.

Despite this the headset is actually reasonably comfortable, thanks to ample padding on the earcups. In fact, after an hour or two of gaming we had none of the usual localised areas of pain – the tops of the ears, around the arms of glasses or on the top of the head. However, after about three hours we had a symptom we’ve never experienced before, which is that the whole side of the head began to ache. It really did feel like the skull was being steadily crushed. Putting on a looser pair of headphones relieved the pressure and reduced the pain.

Of course, the lesson here may be that you just shouldn’t game for three hours straigh,  but equally we feel Turtle Beach could maybe loosen this headset up a bit.

As for audio quality, we were satisfied but not overwhelmed. The overall tone is inevitably a little bass-heavy but it’s far more even than many gaming headsets and there’s a good deal more detail too — it’s clearly a cut above cheaper headsets and far outperforms the Steel Series H Wireless. Mid-range is very prominent too, giving a very warm sound that lends itself very well to most types of music. Turtle Beach keeps its cards close to its chest when it comes to giving
details of the audio capabilities of its headsets, going only so far as
to say that this set uses 50mm drivers.

As ever, you’ll get plenty more performance for your money by buying a standard set of headphones, but at least here there’s a definite sense the sound quality is improving with price, not just the feature list. We also particularly like that the headset performs very well connected straight to a phone or mp3 player, with no need for extra amplification.

One problem we did note was that using the ACU, there’s a bit of background hiss that’s noticeable during moments of silence. We find this annoying but other folks are more tolerant of this – it’s common in wireless and noise cancelling headphones for instance. 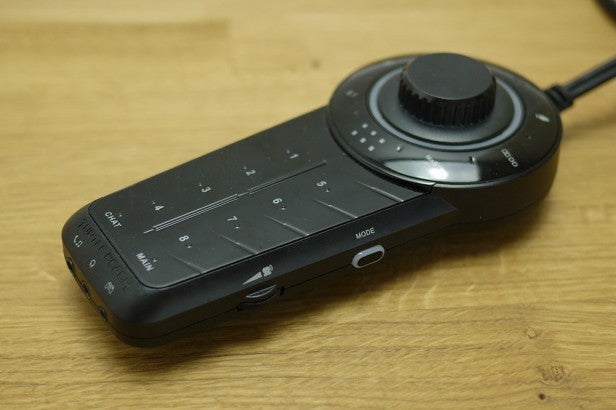 Inevitably the best music-listening experience came from opting for the non-surround mode. Bass is less forced and the soundscape much more natural. This is the experience you get when listening to a portable device too so this could just about double as an on-the-go set of headphones, though the bulk of the headset and open-back audio design doesn’t make it ideal.

As for all that digital cleverness, when connected to a PC this headset just registers as a 5.1 set of speakers, leaving all the tweaking to the ACU. Here you can turn on/off surround sound, adjust the relative volumes of each surround channel, adjust the speaker angle and choose between eight preset (though customisable) tones. 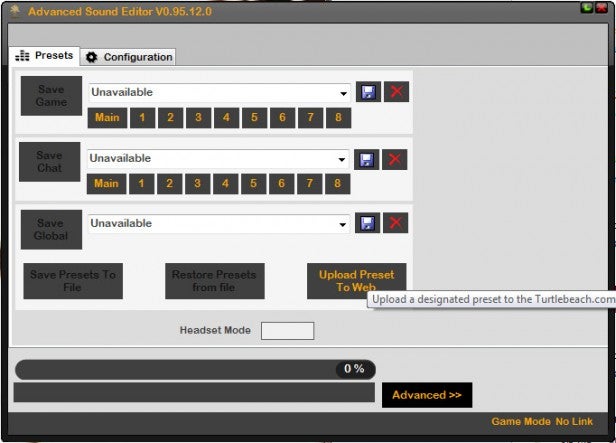 To be frank, we found it all a little bit much and found pretty much every feature made the headset sound worse. That is, for music just standard stereo was best while for movies and gaming the default surround mode with standard tone (flat) was by far the best. Playing with the speaker angles just altered the tone in a rather unfathomable way and changing the speaker volumes didn’t seem to make much difference. What’s particularly perplexing about all these options is that, surely, the whole point of adjustability in a surround sound system is to account for where the speakers are positioned, the shape of the room and the relative frequency range/output of the speakers. Here, though, you’re dealing with a fixed set of speakers a fixed distance from your ears.

Regardless, the core virtual surround mode does work wonders for games and movies, adding a much greater sense of space and depth. Particularly for gaming the improved special awareness greatly enhances your ability to accurately place the source of a noise, which is a key advantage particularly in FPS games.

Another apparently key feature on both this headset and the Z300 is the so called game mode/super human hearing mode that aims to reduce the level of loud noises and increase the sound of footsteps and other softer noises to make it easier to pin point enemies in games. We didn’t really find it worked very well, making the game sound unpleasantly shrill for little noticeable improvement.

As for the microphone, it is very easy to position and offers more than acceptable sound quality. 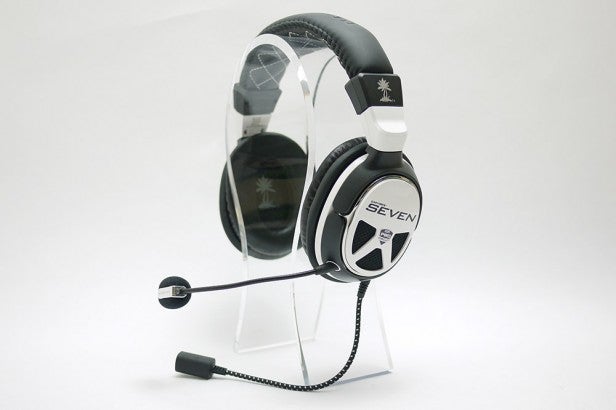 Should I buy the Turtle Beach ZSEVEN?

Much as with the Z300 headset, we feel Turtle Beach hasn’t quite got the balance right here. The fundamentals are all there: overall sound quality is very good for a gaming headset, the surround sound works well and the headset is comfortable, at least for short periods.

However, we didn’t get on with the design of the ACU and felt a lot of its features didn’t amount to much in practice. As such, despite the build quality of the headset – which definitely surpasses the equally pricey Steel Series H Wireless – we didn’t come away feeling this headset offered particularly good value for money.

In some ways Turtle Beach actually does itself a disservice being so coy about hard facts to do with the headset so any build and sound quality enhancements over lower models are difficult to quantify.

The Turtle Beach ZSEVEN is a well-built PC gaming headset that offers excellent stereo and virtual surround audio quality. However its USB audio interface that plays host to many of its extra features just didn’t cut it, making us question the headset’s overall value.

Next, check out more Headphones Reviews or Gaming Peripheral Reviews