What is the Turtle Beach Z300?

In a world where product diversity is increasingly being seen as the way forward Turtle Beach stands out among PC component and peripheral manufacturers for its dogged determination to dominate one market: that of gaming headsets.

One of the latest, and priciest, additions to its vast and varied range is the Z300. This wireless headset boasts 7.1 virtual surround sound courtesy Dolby Headphones technology, supports use with multiple devices at once – including a phone – and of course sports Turtle Beach’s unique brash styling. 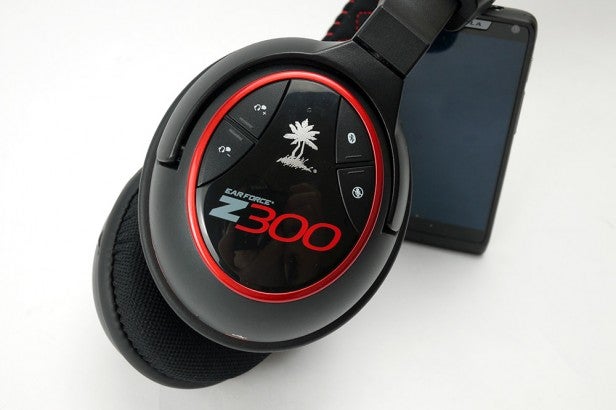 Starting off with that styling, the Z300 is, in fairness, relatively modest for a Turtle Beach design. The combination of black with red highlights seldom fails to look the part and largely it holds up here too. The two more outlandish touches are the diamond-shaped stitching on the headband and the Turtle Beach palm tree logo. All told we still prefer even more understated or perfunctory styles, but we certainly wouldn’t kick up a fuss about having to wear these.

Build quality is decent. Everything feels sturdy, even if it is all plastic. The only obvious cause for concern is the glossy plastic used on the outer faces of the earcups – fingerprints and scratches will build up over time.

Another oddity is that although the microphone can be removed it
still leaves behind its rotatable mounting point – we’re not really sure
why they bothered making it removable, frankly. 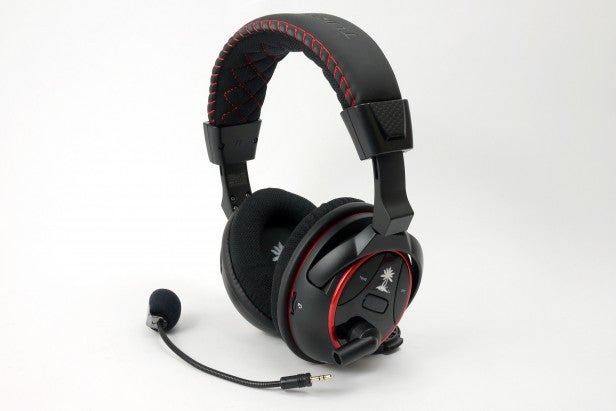 Primarily this is a PC-centric headset that connects to your computer via its included USB dongle, however it can also be connected to Bluetooth devices such as phones. Combined with its relatively compact design with fold flat earcups and closed-back audio design this means you could just about get away with using this as a day to day set of headphones.

When connected to a phone via Bluetooth the headset can be used for voice dialling as well as for connecting calls – just press the Bluetooth button to connect to an incoming call.

Other connection options are available via a jack socket on the left earcup. This can be used to connect to phones or other standard analogue audio sources. It’s inconvenient that this socket is 2.5mm rather than 3.5mm, though. 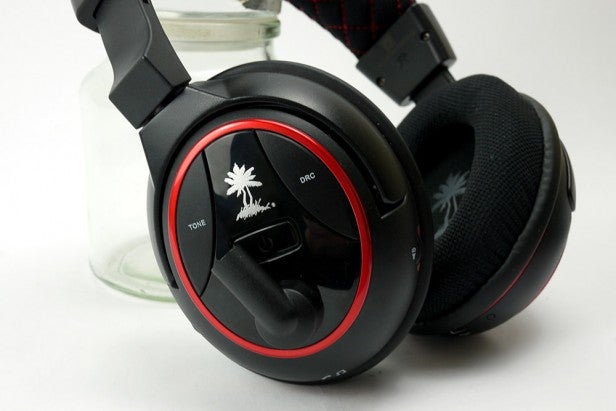 The main volume control uses an analogue volume dial on the left earcup where it’s joined by another volume wheel for the mic level. The power button is also on this side along with buttons for Tone and DRC. Tone switches the on-board digital sound processor between the four different sound profiles: Game Mode 1 (flat response), Game Mode 2 (Bass Boost), Game Mode 3 (Treble Boost), Game Mode 4 (Bass and Treble Boost). Meanwhile DRC switches on Dynamic Range Compression, which reduces the volume of louder noises to make softer noises – such as footsteps – more noticeable, potentially giving an advantage in some games.

On the other earcup we find the miniUSB power socket (we’d prefer microUSB these days) alongside a charging indicator. There are also buttons for adjusting the volume level of Bluetooth audio as well as Bluetooth and Mic buttons for turning these features on/off.

As for the sound system itself, this headset uses a single 50mm driver in each earcup and combines this with digital processing to create all its various tones and 7.1 surround sound effects. While genuine multi-channel surround headsets are definitely superior to this digital approach the digital stuff does still work. However, it’s surprising to see Turtle
Beach not offer a way to turn this off without having to delve into the
Windows speaker settings. 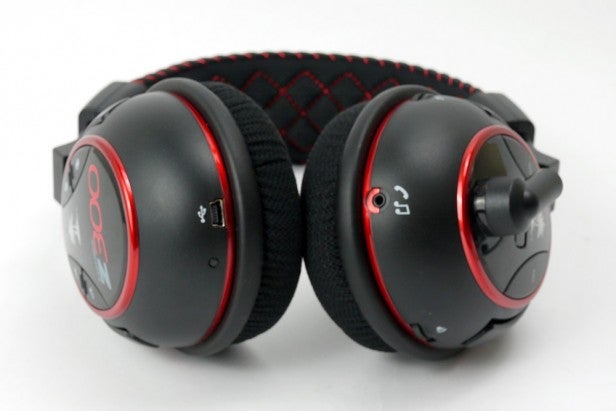 Unlike the Steel Series H Wireless you don’t have access to the battery either. Instead, the units are completely sealed, so when the battery does begin to lose its ability to hold charge you won’t be able to easily replace it.

As for the USB dongle, it’s a pretty standard affair. At around 65mm long we certainly would’ve preferred a shorter unit that could go unnoticed, like the tiny receivers you get with modern wireless mice, but it otherwise does the job. It’s plug and play, with no extra driver required, though you will need to install a surround sound driver to get Dolby surround working. 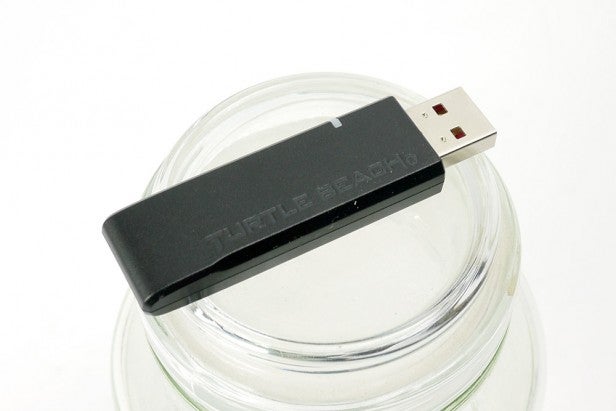 The Z300 uses a half on-, half over-ear design, which means the padding just about surrounds your ears but isn’t enough to stop the earpieces pressing against your ears. Despite this, though, comfort levels aren’t too bad and the headset doesn’t fall off easily. However, the seal created by the padding is not very good. Particularly round the back of the ears there’s an obvious gap between the padding and head. This leads to poorer bass response and noise isolation than this headset could otherwise achieve.

General operation is easy, with it quick and effortless to get the headset working with a computer and paired with a phone over Bluetooth. Both audio sources can be listened to simultaneously, so you can theoretically listen to music from your phone while gaming, safe in the knowledge you can easily answer a call if it comes through, too. 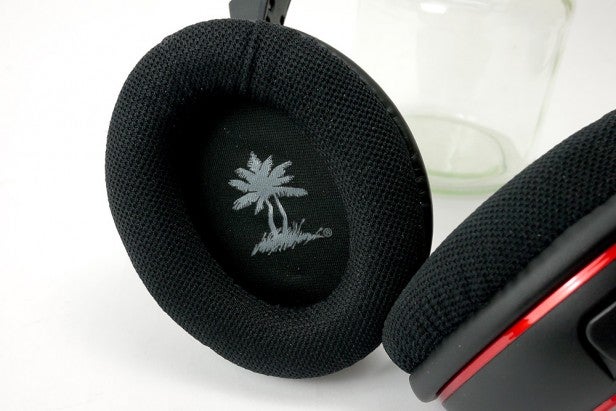 The sheer number of buttons and dials, and their location, meant that we never really found adjusting this headset to be an effortless affair. Particularly, the two volume dials are small and stiff, making fine adjustment difficult. It’s also quite easy to accidentally press one of the many buttons, turning on or off one of the features.

We also couldn’t come to terms with the way the Z300 handles its virtual surround mode. As mentioned, generally standard stereo is preferable for music listening, but the only way to turn this on is to go into the Windows audio settings panel and dig down to turn off Dolby Headphone. A process you then have to reverse to turn on virtual surround for gaming – something we would generally choose to do. Sources connected via Bluetooth and the jack socket just use normal stereo.

Overall sound quality is actually very pleasing. The sound signature is reasonably flat by default and the range of the drivers is sufficient to provide plenty of bass and mid-range warmth. Top-end sparkle isn’t exactly out of this world but is on par with other similarly priced headsets(though not similarly priced headphones, it must be noted).

Turn on Dolby Headphone and the Music Mode rather crudely boosts bass, treble and overall volume while also expanding the soundstage. It’s not wholly unpleasant but we’re not sure we’d ever choose to use it. 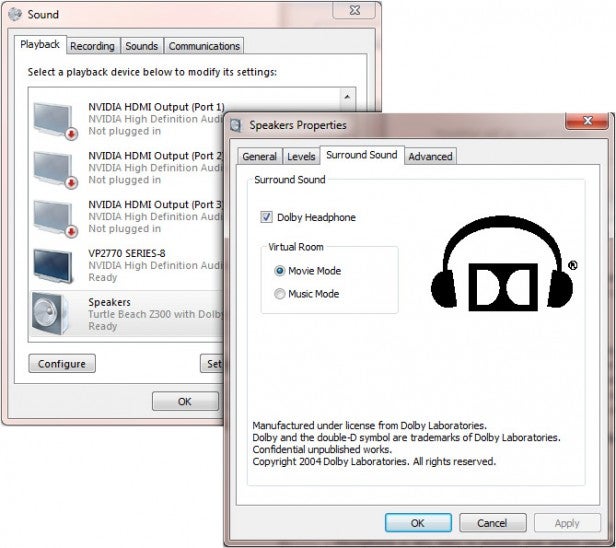 As for Movie Mode (i.e. game mode), the effect is very much more welcome. Dialogue is pulled out from the soundscape and presented very clearly while atmospheric sounds feel much more placed in the world. It’s not so much the moments when a helicopter flies overhead that are so much more convincing but that the acoustics of any given space seem more realistic – small rooms sound like small rooms, open spaces sound open. In gaming this really helps to pinpoint the placement of competitors to the point where we’d consider it a small competitive advantage.

As for DRC, we didn’t notice it making much of a difference with loud noises still generally being fairly loud and quiet ones quiet. Certainly when gaming we noticed no advantage.

As mentioned earlier, we really don’t see the point of a removable microphone that leaves half of it behind but otherwise the microphone is very easy to position just where you need it and sound quality from it is very good.

The battery may not be replaceable but it will get you 15 hours of use between charges and the headset does operate while charging. The headset automatically powers off after a few minutes of inactivity. 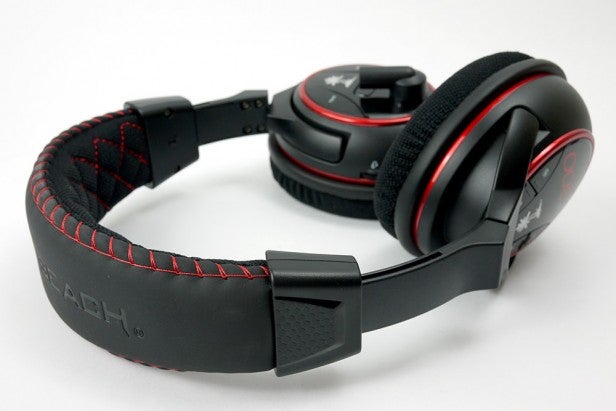 Should I buy the Turtle Beach Z300?

The Turtle Beach Z300 is a great product in many ways. Its combination of reasonable quality wireless PC audio, Bluetooth capabilities and compact design means it makes for a fairly practical everyday headset that could even be used on the street as a set of headphones. However, it has several oddities that mean it doesn’t really feel like a complete success.

The main one is the way that it’s basically forced into being surround sound or standard stereo only when used with a PC, with no way to easily switch between them. This just feels like a crucial oversight. The lack of a replaceable battery makes it far less convenient than the likes of the Steel Series H Wireless too, while the odd not-really-removable microphone still perplexes us.

Then there’s the price. PC World is currently listing it for £129.99 but everywhere else is charging over £150. Either way, this just doesn’t feel like a fairly priced headset. You can get other headsets that offer similar features for closer to £100 and there’s little here that really stands out as being of higher quality than the competition.

The Turtle Beach Z300 is a great wireless, virtual surround headset, but it has too many oddities to justify its premium price.