A capable, robust wireless headset with some smart, easy-to-use features – but console-only gamers would do well to check out similarly priced rivals.

What is the Turtle Beach Stealth 700?

Launched alongside its more affordable sibling, the Stealth 600, Turtle Beach has produced a new wireless gaming headset for both Xbox One and PlayStation 4. Despite its respectable feature set, it still comes in at under £130.

The biggest hook is the Stealth 700’s promise of surround sound, active noise cancellation and the inclusion of Turtle Beach’s own Superhuman Hearing technology. However, it also boasts a wealth of additional EQ presets with support for PC, mobile and VR systems alongside. 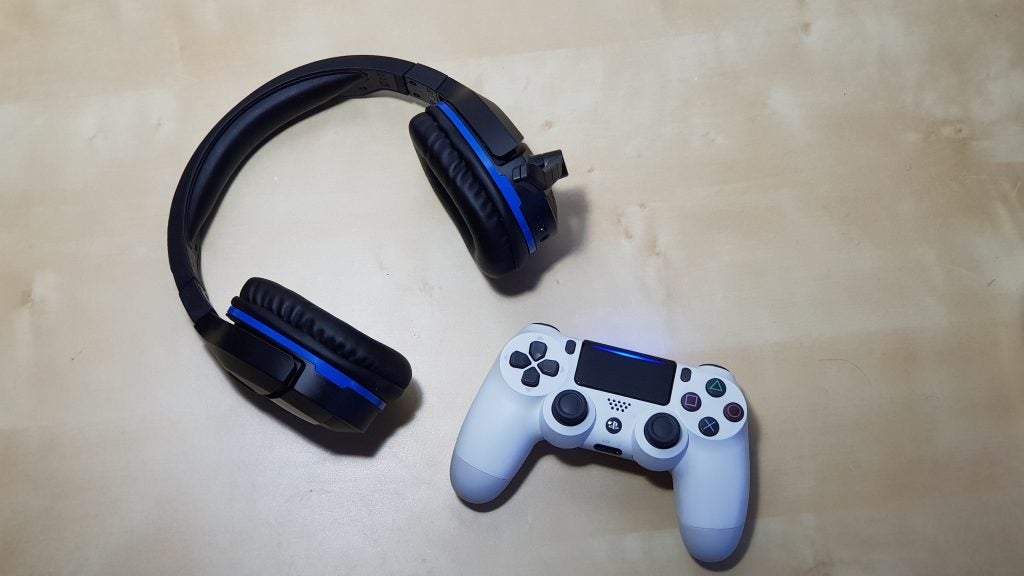 The Stealth 700 offers a robust build that’s primarily hewn from durable, flexible black plastic. It features a mix of textures and finishes that can look a little messy in places. On the smooth, polished diagonal banding across the outer face of each ear cup, in particular, fingerprints adhere all too easily.

There’s a touch of colour at play on both the edges and insignias of each ear cup. Despite gaming hardware’s typical propensity for flare, the Stealth 700 demonstrates surprising restraint when it comes to aesthetics, ensuring you won’t be mistaken for an extra in a Shinjuku robot café.

As for comfort, both the top of the headband and each ear cup pack in plenty of foam padding, all of which is clad in faux-leather. Paired with the 700’s surprisingly lightweight frame, they render extended gaming sessions a comfortable affair. The headband can expand to adjust even the largest of heads, while both ear cups rotate to allow easier adjustment and repositioning when in use.

Turtle Beach has also employed its patented ProSpecs™ Glasses Relief System. This is essentially a portion of softer foam in the upper-third of each ear pad, which flexes more readily to allow for comfortable long-term use by those who wear glasses. It’s a welcome inclusion that more competing headsets, particularly those in the console space, should consider adopting.

The left ear cup is the Stealth 700’s business end. It features all of the hardware controls necessary to access the headset’s main functions, and all of its key ports too. Run your eyes along its underside and you’ll spot a micro-USB port, used for both charging and firmware updates (a sticker attached to the headset suggests that you check for firmware updates via Turtle Beach’s desktop client before first use). 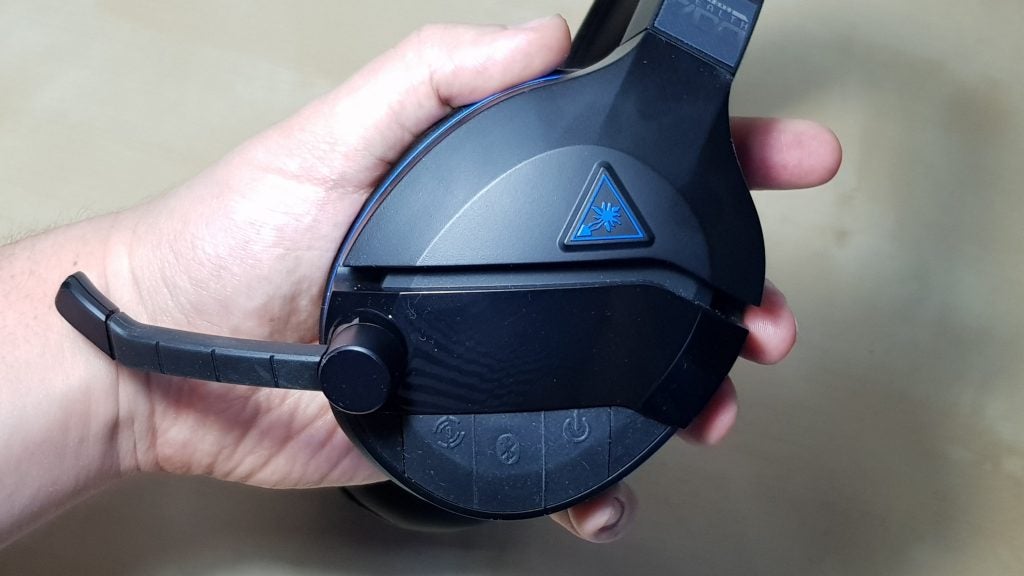 There’s also a standard 3.5mm headphone jack input to accommodate wired connections to devices such as smartphones, but its inclusion is also essential for use with the PlayStation VR’s 3D Audio capabilities, for example, which simply won’t work over a wireless connection. The only problem is that Turtle Beach doesn’t include a compatible 3.5mm cable in the box, so you’ll have to source one yourself if you plan on using the Stealth 700 wired.

Further up on the rear of the ear cup are two knurled volume knobs: one for chat audio, and the other for game audio. Like the rest of the Stealth 700’s hardware controls, both are tactile enough that you can locate and operate them reliably via touch alone.

The lower half of the ear cup’s outer face features a large rubberised panel with three hardware buttons on it. The first is the Stealth 700’s power key; the middle button allows for pairing over Bluetooth; while the foremost button toggles the headset’s aforementioned Superhuman Hearing™ ability. Like the volume knobs, these too are easy enough to operate via touch alone. However, the relief in the rubber is a little too shallow and would have benefitted from bolder forms with heavier embossing for greater tactility.

Turtle Beach has integrated a rather ingenious mechanism into the Stealth 700’s omnidirectional microphone. It locks into three distinct positions, with the back-most stop disabling the microphone altogether. The middle position temporarily places the microphone in a muted state, and the forward-most position activates the microphone for in-game chat. Knocking between these various points is intuitive and effortless, negating the need to hunt for a mute key on your PC, console or the headset itself. 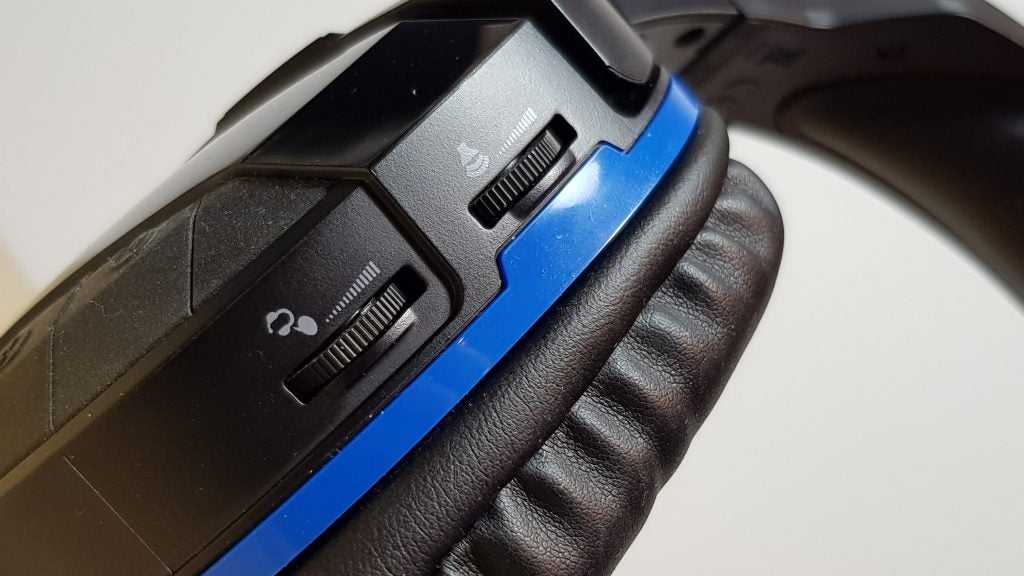 Depending on what you’re connecting it to, setting up the Stealth 700 is a relatively painless affair. It comes pre-paired to the USB wireless adapter with which it’s bundled (this is absent from the Xbox One version, which uses Microsoft’s Xbox Wireless protocol to pair with Xbox One consoles and compatible PCs directly). You might have to manually switch over the audio source on your PC or PlayStation, but that’s about all that should be required to get up and running.

Turtle Beach’s Audio Hub mobile app is available to download to allow fine-grain control over the Stealth 700’s settings and EQ. This includes a range of eight presets that you wouldn’t readily know are available otherwise. It isn’t the most reliable app experience, and the fact that you need to pair the Stealth 700 to your phone to change certain settings is a little convoluted. Nevertheless, it’s good to know that it’s available to users.

After some lengthy gaming sessions and a bit of music and media playback thrown in for good measure, the Stealth 700’s promise of up to 10 hours of battery life holds true. Charging up from empty takes around two to three hours, and for convenience there’s a pulsing LED next to the micro-USB port to let you know when you’ve topped the battery back up completely.

Stick the Stealth 700 on and you’re in for a treat. The 50mm drivers push out warm tones, with impressive detail and clarity considering the headset’s mid-range standing. They produce a wide sound, with an emphasis on the bass and treble. However, this does result in some details within the mids becoming lost if using the default game audio preset. Thankfully, there are other EQ modes on-hand to rebalance the sound as needed.

As for the microphone, it produced mixed results. Whilst testing on PC (playing PUBG), there was at least one complaint from someone on the receiving end claiming that it sounded too quiet, while at other times the clarity of the audio captured was commended by strangers unprompted.

Thankfully, the compliments and general praise significantly outweighed any negative responses. As such, it would appear that Turtle Beach has, for the most part, done its homework with regards to tuning the 700’s microphone technology.

Jumping from PC to console (a PlayStation 4-compatible variant of the Stealth 700 was used for this review), there were a few more hiccups. For the most part, the plug-and-play convenience found on the PC experience transfers across to console, but the lag between the microphone monitoring that takes place when using the optical connection is distracting enough that you’ll want to roll the chat volume knob all the way down. 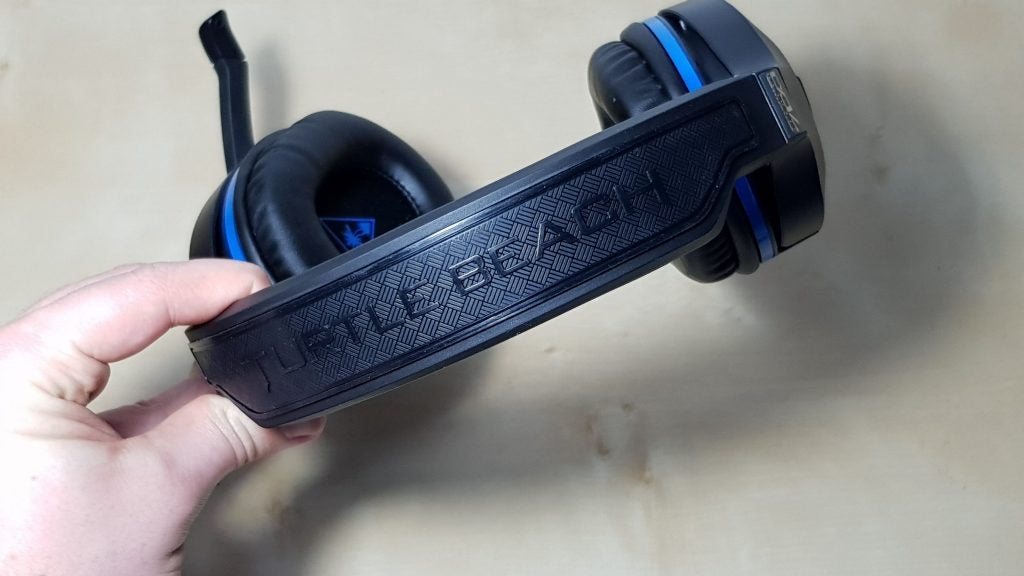 Another concern is the Stealth 700’s waning reliability once you hear the “low battery” audio cue. At this point, the wireless connection breaks down almost immediately, with the only solution to plug the headset back in, even before power is completely exhausted.

You shouldn’t experience any issues with the 700’s DTS Headphone:X 7.1 surround support, which adds real depth to numerous gaming scenarios, whilst the Superhuman Hearing feature is useful in games such as PUBG and Fortnite, where sound cues are key. This is so long as you understand that it destroys audio fidelity by dropping out bass completely while pushing the mids and highs to the extreme.

As for the Stealth 700’s claims of active noise cancellation, it does technically deliver but the circumstances under which the feature operates are a little… dubious. Rather than more conventional headphones with noise cancellation – such as the Bose QC35 IIs – that use integrated microphones to suppress ambient noise by pushing an inverse waveform into your ears, Turtle Beach’s headset offers mic monitoring by default.

It’s a feature that’s ideal for gaming, ensuring you can hear what you’re saying clearly through the headphones, just as your teammates can. However, switching on ANC on the Stealth 700 is really disabling this monitoring feature, cutting out any ambient noise that would otherwise be picked up by the microphone, while at the same time removing the ability to hear your own voice.

Why buy the Turtle Beach Stealth 700?

There’s plenty to like about the Stealth 700’s feature set, not to mention the fact that it prioritises substance over style without looking too cheap or nasty. However, whether or not it stands as a worthwhile purchase will depend on the platforms you game on.

If you’re looking for a decent wireless headset for console gaming exclusively, then despite the rich sound and EQ options the 700 offers, its reliability has to be called into question.

For VR, mobile and/or PC gaming it becomes a more enticing proposition, since it’s essentially more comfortable and reliable on these platforms than the one for which it’s being touted.