What is the Turtle Beach Stealth 500X?

Ever since the Xbox One launched in November 2013, it’s been playing catch-up when it comes to gaming headsets. The console didn’t even work with third-party headsets for four months after launch, until Microsoft released the Official Xbox One Stereo Headset Adapter. Now, over a year after launch, the first wireless Xbox One headset is only just hitting the market, which does away with the need for any adapter at all.

The Turtle Beach Stealth 500X is completely wireless, so doesn’t need to connect to the Xbox One Controller using any wires. This extra freedom is a luxury rather than a necessity, but it certainly makes all the difference when you’re playing prolonged online sessions.

However, the Turtle Beach Stealth 500X isn’t perfect. Comfort, appearance and audio features fall quite far short of Turtle Beach’s Elite 800 headset, which costs only £20 more. And while it is completely wireless on Xbox One, you’ll need to physically connect it to the PS4’s DualShock 4 controller to use it with that system.

Overall though, you’re an Xbox One gamer who wants a top-class headset that offers the freedom of wireless, the Turtle Beach Stealth 500X is the headset to get. 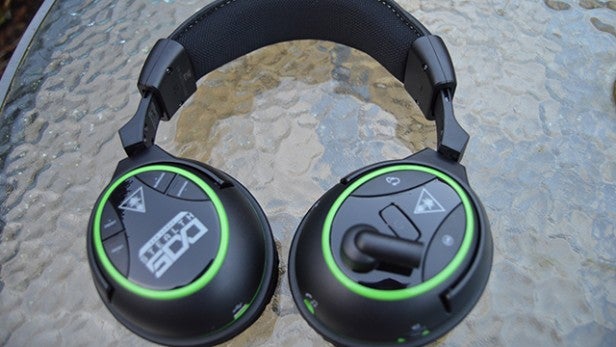 Turtle Beach’s headsets come in various different flavours when it comes to luxuriousness. At the top of the tree is the new Turtle Beach Elite 800, which comes with soft plastic-leather lining, memory foam padding, and a relatively stylish finish.

At the mid-range, its headsets come with mesh lining, ordinary foam padding, and perhaps a less premium/lifestyle-led design. This is where the Turtle Beach Stealth 500X comes in — it’s not as luxurious as its new Elite 800 stablemate, but it’s still solidly constructed and comfortable for long gaming sessions. The issue though? The Stealth 500X isn’t a mid-range headset: it carries a steep £230 price tag, just £20 less than the flagship Elite 800.

The Stealth 500X looks like nearly every other Turtle Beach headset ever made, in as much as it definitely looks like a gaming headset, rather than a lifestyle product. The green detailing is consistent with Microsoft’s Xbox branding, but it doesn’t look particularly cool. Sadly, the ear plates aren’t removable either, so there’s no scope for customisation like there is on the Elite 800.

The headset is also adorned with a variety of buttons (eight, to be
precise, plus two volume wheels), which is great, but there’s a lot to
learn, and they’re easily pressed by mistake. The microphone can be
removed, but the connector itself protrudes from the headset about an
inch, which isn’t particularly elegant. 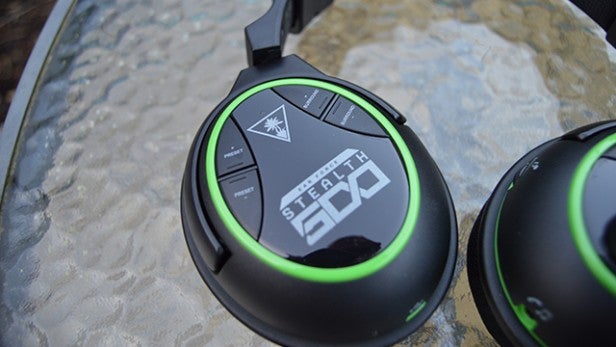 So if it’s not build quality, what’s justifying the high-end price tag on the Stealth 500X? Well, the headset’s wireless functionality has to be a major factor – it’s a first for an Xbox One headset, so it’s currently the only one on the market. This is provided by a small box that’s about the size of a pack of cards, which connects to the Xbox One using USB and digital optical connections. Once connected, paired and setup in the Xbox One system settings (all of which takes less than five minutes), you can use the headset wirelessly with the Xbox One without the special controller adaptor that’s been a necessity up to now.

The package comes with all the cables you need to use it with an Xbox One, and a 3.5mm cable to connect it to anything with a headphone output. This means the Stealth 500X can actually be used with nearly all computers, tablets and mobile phones, although you still need to make sure the internal battery is charged. 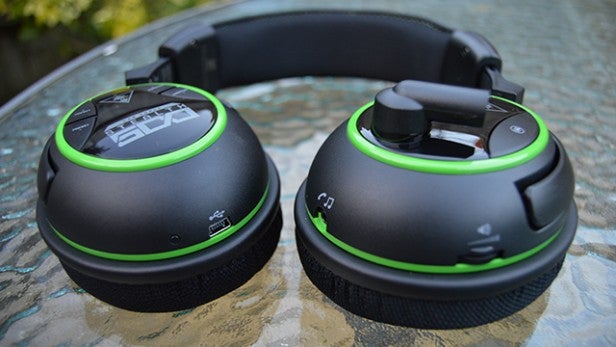 The battery on the Stealth 500X is rechargeable using the included mini-USB cable. It seems like a design oversight that the headset doesn’t have a micro-USB connector — the same one used to charge the Xbox One controller. As a result, you need a different cable plugged into your Xbox One console for the headset, in addition to the one for the wireless receiver, which takes up two of the console’s three available ports. Chances are you’ll have another USB port nearby if things become an issue, but it’s still a frustrating oversight. Thankfully, if you lose or break the charging cable, at least you can pick up a new one very cheaply, or even just plug it into a standard USB wall charger.

Thankfully, you don’t have to charge the Stealth 500X too often, thanks to its excellent 15-hour battery life. We found that it actually went slightly beyond the quoted capacity when we were using the headset in stereo mode and the microphone wasn’t connected. The main frustration is having to wire the headset in every time — we much prefer the dock on the Elite 800, which allows you to drop the headset in without having to plug in any cables. 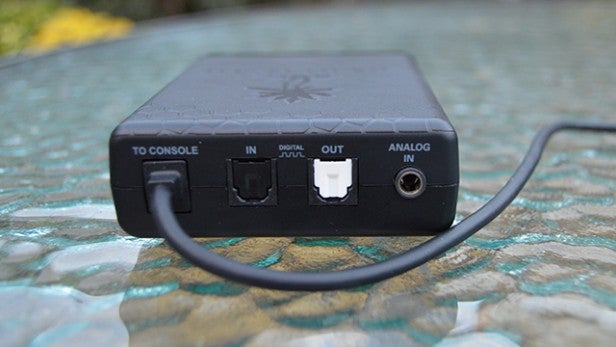 While the headset doesn’t officially work with other consoles or PCs, it will work just fine with pretty much anything with an optical audio output. On PS4, you’ll need to use a wired connection to connect it to the controller, which isn’t quite as elegant as on Xbox One, and you won’t be able to control volume using the buttons on the headset, but it works.

Whatever format you’re using, there’s an optical audio passthrough on the wireless receiver, meaning you can still output game audio to your speakers, so other people can hear what’s going on. The headset also includes a 3.5mm audio connector, so you can connect to any device that has a headphone socket. 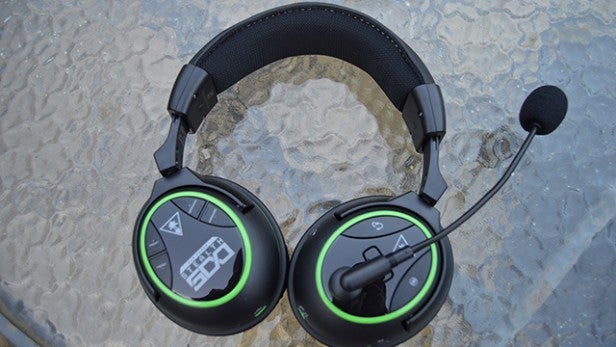 The big feature for the Stealth 500X is DTS Headphone:X 7.1 Surround Sound, which has only recently been introduced to Turtle Beach’s high-end headsets. When you’re using a Dolby Digital source, such as a game or a movie from your Xbox One, the headset will intelligently retune the signal to provide a faux surround sound through the headset’s stereo drivers.

The result sounds good, although you trade some of the stereo clarity in return for a wider sound stage. It works particularly well in first-person shooters, where you can hear where gunfire is coming from, and action movies, which usually just sound better in surround sound. However, for all of Turtle Beach’s crowing about the introduction of DTS Headphone:X 7.1 Surround Sound, it doesn’t sound noticeably better than surround headphone technologies on competing headsets. 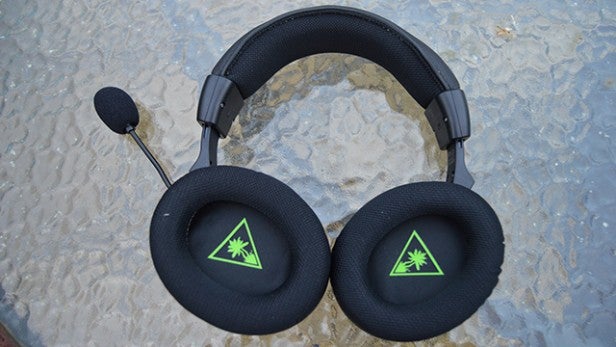 Sadly, the Stealth 500X is lacking a couple of the standout features that make its bigger brother, the Elite 800, really stand out. While the headphones do a good job of isolating external distractions thanks to good earcup design, they don’t have active noise cancellation, which is a boon for those who travel long distances often. And while the microphone on the Stealth 500X is definitely better than hidden one on the Elite 800, it’s also much easier to lose, and the connector on the ear cup juts out, which makes it look less elegant.

One of the best features of Turtle Beach headsets in general are the custom sound profiles. You can tweak the audio on the Stealth 500X to such a degree that it might actually be a bit overkill. There are four main categories of audio: Game, Movie, Music and Stereo, which are then broken up into sub-categories such as shooters or racing games, horror or action movies, and acoustic and dance music. 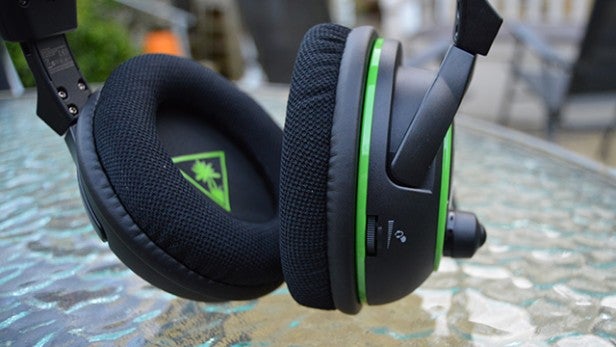 On the games side, there are individual presets that aim to make the most of popular games such as Call of Duty, GTA 5 and Destiny. We really liked these quick presets — the layman doesn’t have to know what’s being tweaked, but the end results are excellent. The downside is that you have to connect the headset to a PC to download and manage these presets, and there’s no Mac or mobile support. You also need a PC to update the headset’s firmware, so bear that in mind if you’re a Mac household.

Microphone quality on the Stealth 500X is excellent, thanks to the fact that the microphone is highly maneuverable. There are also some great microphone features built into the headset. When you’re talking to people online, your own voice is pumped back through the headset so you don’t end up shouting. Also, the dynamic chat boost automatically increases other voices whenever in-game audio gets loud. 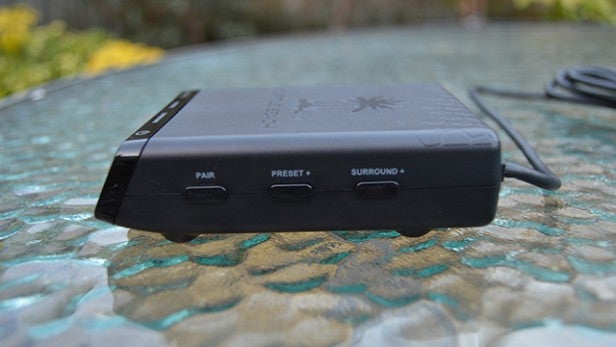 Should I buy the Turtle Beach Stealth 500X?

If you’re an Xbox One owner looking for a completely wireless headset, then there really is only one option right now — this Turtle Beach Stealth 500X. More will no doubt be coming, but for now, this is your only option if you don’t want to have to physically connect a headset to the Xbox One controller.

That specialism makes it kind of like an Apple iPhone – it’s great at doing one thing really well, but you’re paying a premium for it. It’s a great-sounding headset, but it lacks the premium quality finish of other headsets in this price bracket, such as Turtle Beach’s own Elite 800, as well as some of the great features of that headset, such as active noise cancellation.

That said, it’s a fantastic-sounding headset both in terms of speakers and microphone. If you game on the Xbox One and spend a lot of time online, you owe it to yourself to upgrade to the Turtle Beach Stealth 500X — just bear in mind that an Elite 800-style option is in the works at Turtle Beach’s New York offices and will arrive in the UK later this year.

The Turtle Beach Stealth 500X sounds great, has excellent battery life and offers all the benefits of wireless, but build quality, features and comfort are all far behind the similarly-priced Elite 800.