What is the Turtle Beach Grip 500?

Turtle Beach has carved out a name for itself with gaming headsets, so a transition into the gaming mouse market is no big surprise. The 7-button Grip 500 is the headline act, landing as a premium cousin to the 5-button Grip 300.

The Grip 500 is a minimalist device designed for multi-genre gamers. Features include re-programmable buttons, a dedicated software suite, and high-range DPI options. That’s plenty of ticks on paper, but how does it fare against the competition? 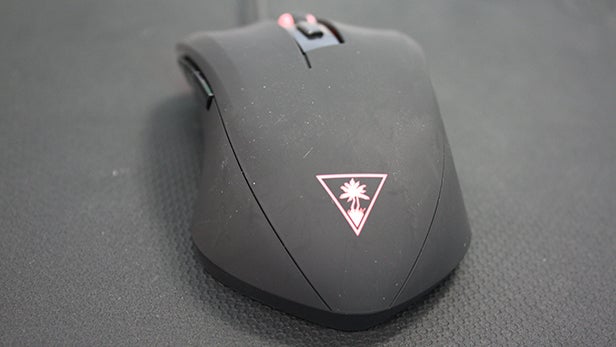 The Turtle Beach doesn’t rock the boat with design; it looks like a sized up version of a conventional mouse. That’s not necessarily bad, in an industry where devices too often look like they were modelled on the Autobots. Extra buttons are kept to a minimum, and nothing feels out of place or awkward.

The Grip 500 has a ‘non-slip, soft-touch coating’. Grip friction is good, but the mouse gets slightly clammy during extended use. It’s also a wired mouse, so the connection to your machine is inherently better than wireless rivals. We found it stable and responsive. You’re constrained by a cable, of course, but it’s over 2 metres in length, so it’s no problem for most set-ups.

We tried the mouse using both palm and claw grip, and found claw to be significantly more comfortable. The mouse is quite long, and the curve of the body means we’re forced to over-extend to click the left and right buttons using palm grip. While users with saucepan-rivalling hand-spans will be able to palm the mouse, most users should avoid. 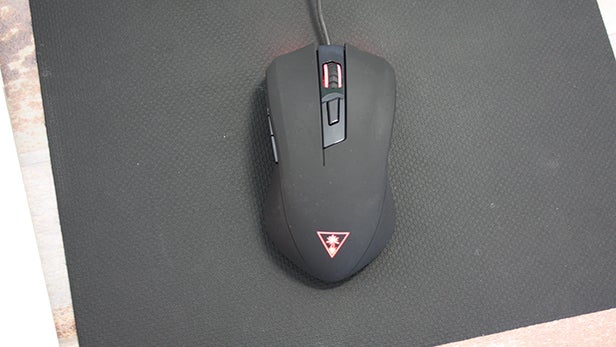 The button spacing on the mouse is good, however. The left, right, and DPI-switcher buttons are all easy to activate, and the scroll wheel placement feels natural. Our thumb rests perfectly on the three side buttons too, although we did have some trouble with distinguishing between these without looking. They’re separate, but not distinct enough to differentiate during high-pressure, twitch gameplay.

The main ergonomic failing of the Grip 500 is with the DPI switcher. It only lets you cycle upwards through DPI settings. Once you get to level four, it reverts to the lowest setting again, which makes it tedious to rapidly switch between certain DPI grades. Up-and-down cycling is commonplace on gaming mice, so we’re not sure why Turtle Beach didn’t include a rocker switch. 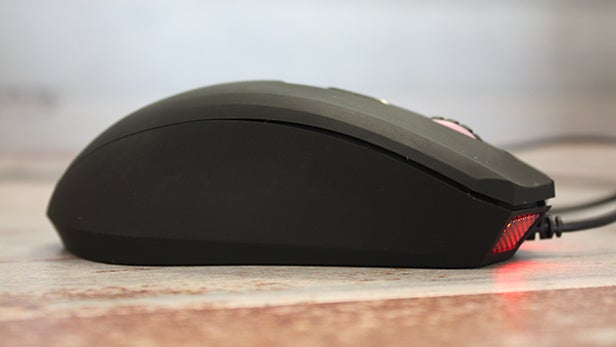 The headline feature of the Grip 500 is its maximum DPI setting. DPI stands for dots-per-inch – the higher the DPI, the more distance your cursor moves relative to your hand movements.

The Grip 500 can be set at anywhere between 200 and 8,200. For reference, non-gaming mice typically use sub-1500 DPI sensitivities. At 8,200, you’re looking at the very high-end of DPI on the market. Don’t forget that DPI is a contentious metric for gauging mouse quality. Manufacturers often jack it up to market devices better, in the same way processor cores, clock rates, and image sensor pixel resolutions are abused. For most users, setting the Grip 500 to 8,200 DPI will make gameplay impossible, at least for a while. The sweet spot for gamers is generally perceived to be between 2,000 and 5,000 DPI. Anything higher is difficult to master, and won’t be worth the time for most users.

The Grip 500 also lets you change its polling rate on the fly. The polling rate is how often the mouse tells your computer its position. A polling rate of 500Hz, for instance, equates to 500 position reports every second. You can jack it up to 1,000Hz with the Grip 500, but bear in mind that higher polling rates increase demand on your CPU. Anything higher than 1,000Hz is pointless, so Turtle Beach chose a sensible cap. 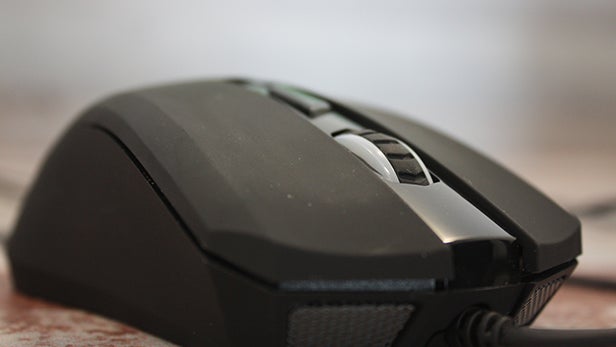 Like most gaming mice, Turtle Beach has its own software suite, imaginatively titled ‘Grip 500’. You’ll find the download for the files on the Turtle Beach website, and the installation process only takes a few minutes. Once that’s done, you get access to a wide range of features that let you customise your mouse on a software level.

Serious gamers will find good use of the macro settings, which enable you to create complex commands and assign them to mouse buttons. These work great in games like World of Warcraft, where you might want a single button press to perform several tasks. Grip 500 lets you create 50 different macros, each good for 100 commands. It’s a shame Turtle Beach limited the number of macros, but it will be enough for most players. 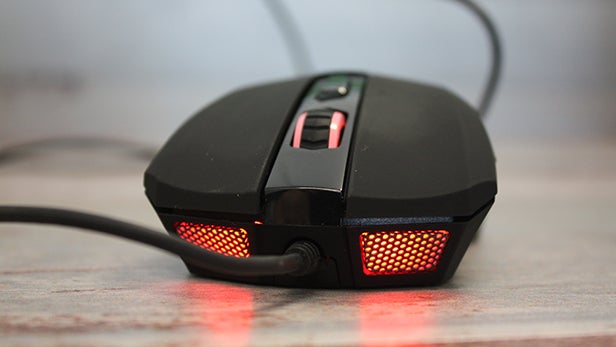 The software also lets you change the lighting colour on the Grip 500, which is par for the course with gaming mice. Herein lies the biggest failing of Turtle Beach’s fledgling device: you can only change the colour of the scroll wheel. That’s an incredibly frustrating design choice, because there are several light-up points on the device, namely two front grills and the Turtle Beach logo on top of the mouse. They all glow red, irrespective of what colour you choose for the scroll wheel. This makes the mouse look weird if you’re using anything other than red for the scroll wheel. Many mid-tier gaming mice can handle multiple light-up sections, so this feels lazy.

Fortunately, you can change the glow effects of the wheel. There are four options, specifically ‘off’, ‘steady’, ‘breathing’, and ‘battle mode’. The latter intensifies the illumination based on how you’re clicking in real-time. It’s a cool feature, but you don’t really notice it when you’re playing, which makes it a bit pointless.

You can also set five different profiles for the Grip 500 that are loaded into the on-board memory of the mouse. These profiles can be switched between on the fly, which makes it useful for if you’re in the middle of the game, or if you want a different profile for a different game. Obvious choices for alteration are assigning DPI grades for your four DPI settings, and modifying lift-off detection distance for the mouse. They’re both features you’d want to change depending on the game you’re playing. Once again, however, the Grip 500 falls down against its rivals. For instance, Razer’s Synapse 2.0 software has a feature whereby the program detects which game you’re playing and selects the relevant profile. This is a manual process with the Grip 500, which, again, feels lazy. 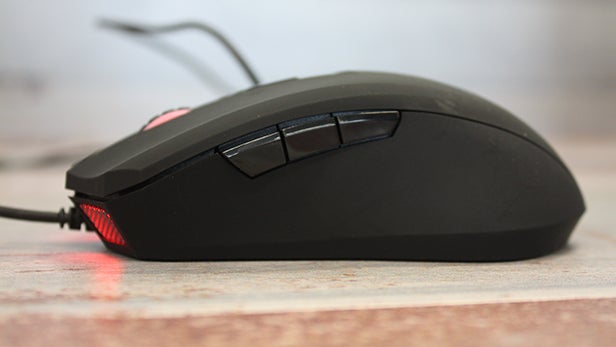 The main thing to consider when buying a gaming mouse is what types of games you play. That’s not a huge worry with the Grip 500 thankfully; we found it to be a versatile device. It performs respectably across a variety of titles, although it’s suited to some than others, naturally.

We find the Grip 500 works best on shooters. Firstly, there aren’t many buttons, which is suited to FPS games that typically have simple controls. It’s also lightweight, which is good for twitch gameplay. The dot-tracking is reliable, which is also essential in shooter games where you have to place the cursor on small targets very quickly. Finally, the high DPI range is perfect for FPS titles. Mouse sensitivity is most useful for games where you need to perform very fast actions with the cursor – think shooters, MOBAs, or real-time strategy. While you won’t be able to use the 8,200 DPI setting immediately, you can work your way up to around 5,000 over time, which will bring a noticeable improvement to your gameplay.

The Grip 500 is beaten by more complex devices on MMORPG titles, however. The macro limits and low number of customisable buttons means it can’t compete with more targeted MMO devices on the market – the 19-button Razer Naga Epic Chroma, for example. Casual players will get on fine with the Grip 500, but serious gamers will want to invest in a device with more functionality.

As an all-purpose mouse, however, the Grip 500 is good. Its simplicity makes it a solid choice for those looking to play a wide variety of games.

Should I buy the Turtle Beach Grip 500?

There are lots of great things about the Grip 500. Its performance was consistent; we found no cursor stutter or tracking issues. The design is basic, which makes for an easy transition for users moving on from conventional mice to gaming-focused devices for the first time.

Unfortunately, the Grip 500 simply doesn’t keep up with the competition, which makes it tough to recommend. While it’s undeniably reliable and robust, it feels outdated. Contemporary gaming mice have more ergonomic design, significantly more advanced software, and a wider range of features.

If you want a basic gaming mouse that doesn’t cost the earth then you will find good use from the Grip 500. But there are simply better options at a similar price, so we’d recommend looking at the Razer DeathAdder Chroma, which costs £60-65.

As a first try from Turtle Beach, the Grip 500 is a good quality mouse that won’t let multi-genre gamers down. You can get a more refined device for your money though, so consider the Logitech G502 or the Razer DeathAdder Chroma.