With its app smarts and powerful audio, the Turtle Beach Elite Pro 2 sets itself apart - although it certainly doesn’t come cheap and it isn't quite perfect.

What is the Turtle Beach Elite Pro 2?

The Turtle Beach Elite Pro 2 is a top end gaming headset designed for e-Sports professionals and hardcore gamers with cash to burn. It doesn’t have the swish custom magnetic drives of the Mobias or quad-DAC of the Asus ROG Delta, but it is still a fantastic device that gets nearly all the basics right.

If audio quality and a decent mic are your primary concern this may well be the headset for you. However, if you’re a casual player there are better value options available, like the cheaper Turtle Elite Atlas.

Upon pulling the headset free from its (rather lovely) box, I was immediately enamoured with the design. If you’re all about flashing LEDs and ridiculous flair, you’ll have to look elsewhere. The Elite Pro 2 is a much more subtle beast, with its plain black (yet still quietly stylish) finish. However I’d have preferred the Turtle Beach logo to be all in black also, or relocated to a less prominent position than both ear cups. It isn’t exactly the most attractive icon.

Thankfully those ear cups can be pulled off quickly and cleanly, as they’re held on by a series of tiny yet powerful magnets. That attraction is solid – no amount of abusive shaking had them flying off. And Turtle Beach apparently offers a selection of alternative designs, so you can swap in a pair that suits your personal tastes. 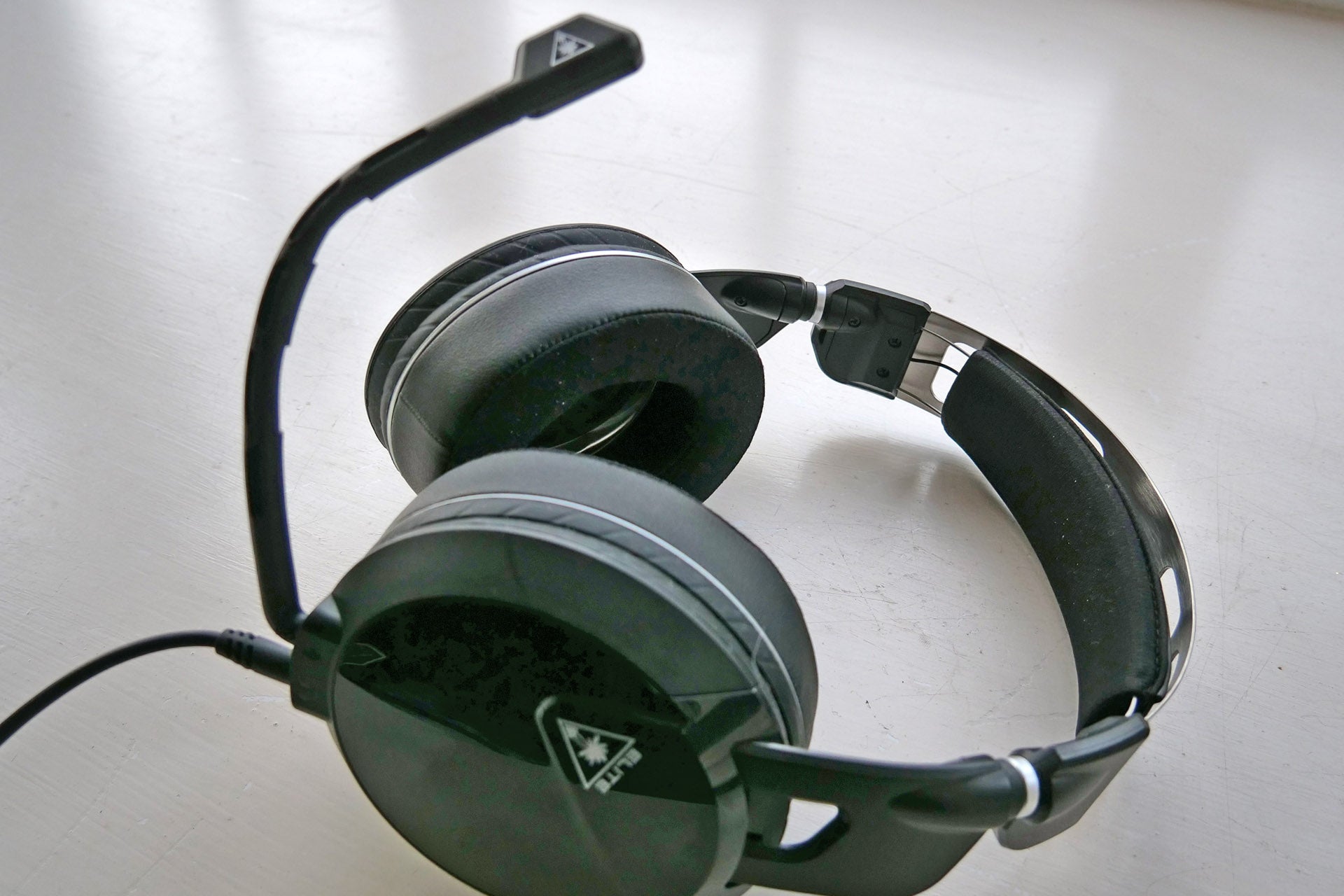 A steel headband connects the cups and this is reassuringly flexible, as well as tough. I tried twisting and yanking the Elite Pro 2 all over the place and didn’t see any signs of strain.

The leather ear cup padding is as comfortable as you’d expect at this price point, enclosing your ears without squishing them. Apparently the material is infused with cooling gel to keep them from getting all hot and sweaty, although my lugs still got a little toasty after close to two hours of gaming. Perhaps I just have a particularly hot head. You also have a standard cushioned strip running along the underside of the band, so you don’t feel the headset pressing down on your scalp (even if you’re a baldy like myself).

Glasses wearers rejoice too, because the Elite Pro 2 is refreshingly accommodating to facial furniture. That padding doesn’t force the arms into the side of your skull, so you shouldn’t feel any discomfort.

Those memory foam cushions do a half decent job of blocking out external noise, although you won’t be completely isolated. Probably just as well if your mum’s screaming that supper’s ready. And if they start to show signs of wear and tear, you can simply take them off and replace them, to extend the lifetime of the headset.

As for the mic, that can be attached and pulled off at any time, so you can stow the thing when it’s not needed. It’s a bit of a beast, but you can flex it about until you’re comfortable with the positioning. I’d just worry about losing the thing if I had it disconnected, so a mic that slips back inside the chassis would be preferable. But given the 50mm drivers and other smart tech that makes up the internals, that would be no mean feat. 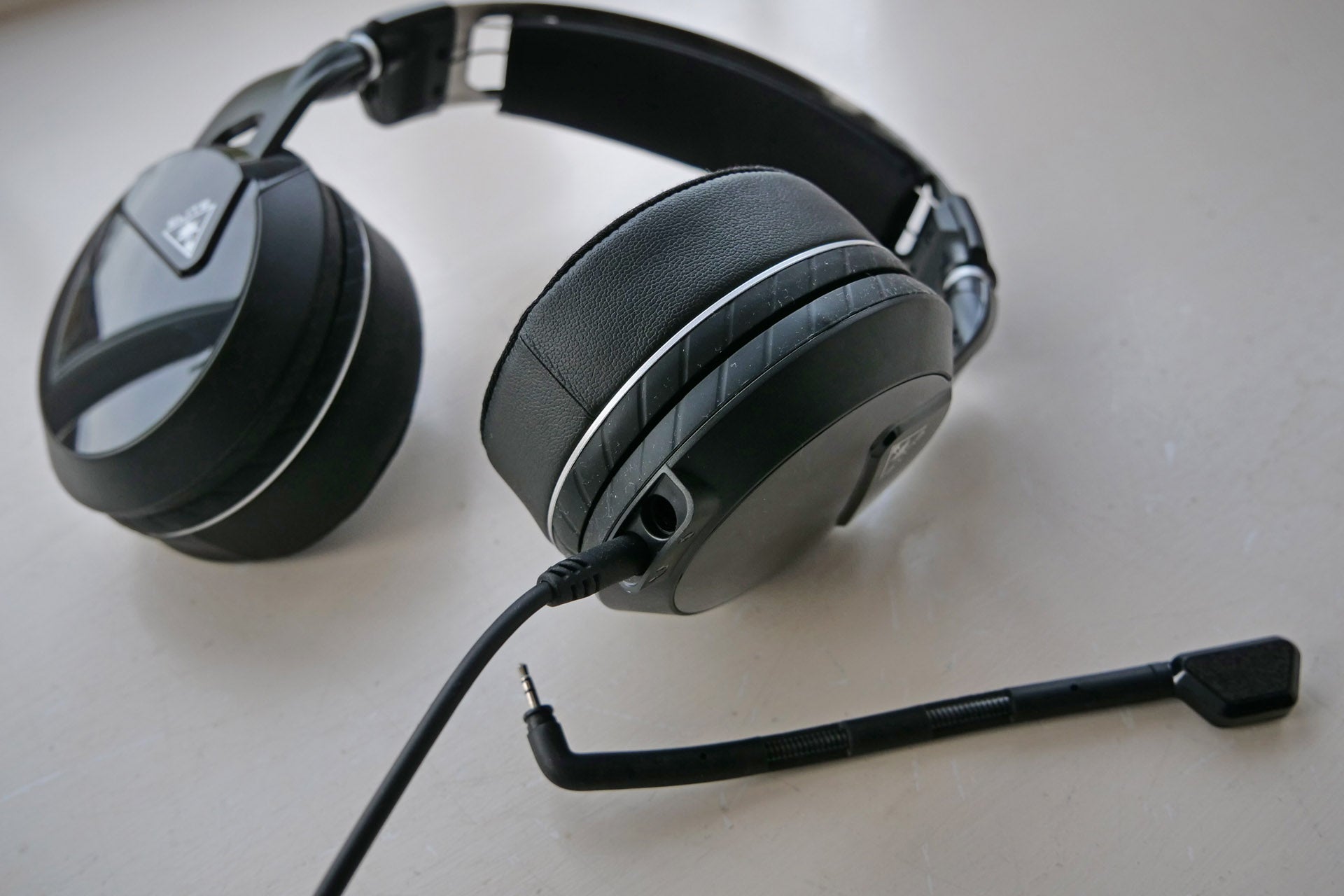 Rather notable by their absence is a complete lack of controls on the headset itself. The Elite Pro 2’s cups are devoid of volume rockers and other buttons. In fact, you do get a volume controller, in the form of a dial on the Elite SuperAmp. A 3.5mm cable connects the headset to the amp, while a USB cable completes the connection to your PC or PS4. It’s a bit of a fiddly setup, although the combined length of the cables is more than enough to accommodate a large living room. Just be aware that you’ll leave a trip-worthy trail stretching between your console and the sofa.

This complicated arrangement allows you to configure the headset’s audio output using your smartphone. That’s because the amp adds Bluetooth support, so you can pair with your Android device or iPhone. All you need to do (once the amp and everything is set up) is download the Turtle Beach app, to enjoy a respectable range of controls right there on your smartphone screen. Any adjustments are made in real time, with no delay or disruption. More on this in a bit.

You can also download the Turtle Beach app for Windows if you’re gaming on your PC, but I simply could not get this to work. The app just tried to update my amp’s firmware in an endless loop, so I soon gave up and returned to the mobile app.

When it comes to the audio chops, Turtle Beach doesn’t disappoint. The Elite Pro 2 rocks some 50mm drivers, for full-bodied sound no matter what you’re doing. Boot up something like God of War and those gritty sound effects really hit home. From the scraping of Kratos’ axe against metal, to the solid thwack of flesh pounding flesh, every individual noise is visceral and vicious. 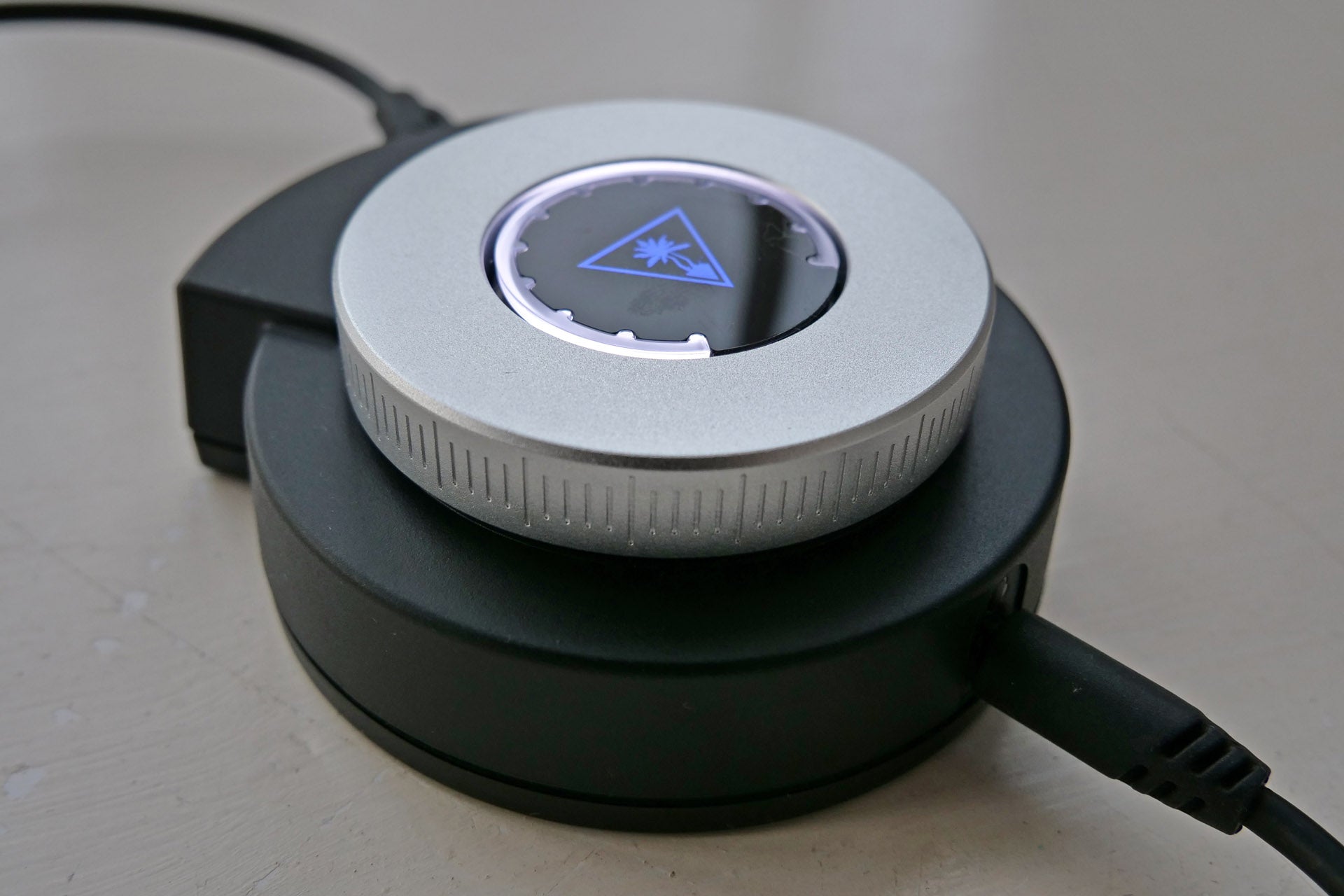 DTS Headphone:X 7.1 surround sound support is pretty much essential at this price point, to give competitive gamers the edge. I had no complaints at all in this area either. Directional audio is clear, so you can respond to any sudden bursts of gunfire and so on. As usual, voices were a little echoey with the surround sound turned on – but you can always switch to standard stereo output when you don’t need full immersion.

Through the Turtle Beach app, you can fully configure the sound balance of the Elite Pro 2. For instance, if you’re struggling to hear your teammates over the ensuing carnage, you can boost the chat volume with a quick tap. Likewise you can tweak your mic sensitivity, if you’re battling to be heard.

Audio balance can also be played around with. There’s full controls for the bass and treble, while you can use a small selection of presets to quickly cycle through different settings. The bass boost is particularly good when you’re kicking back with some heavy rock between matches.

You also have a ‘superhuman hearing’ feature, which is supposed to amplify important surrounding noises like the footsteps of your foes sneaking up behind you. This certainly distorts the sound to prioritise immediate audio, which is a little distracting – but some may find it a helpful leg up for online gaming. 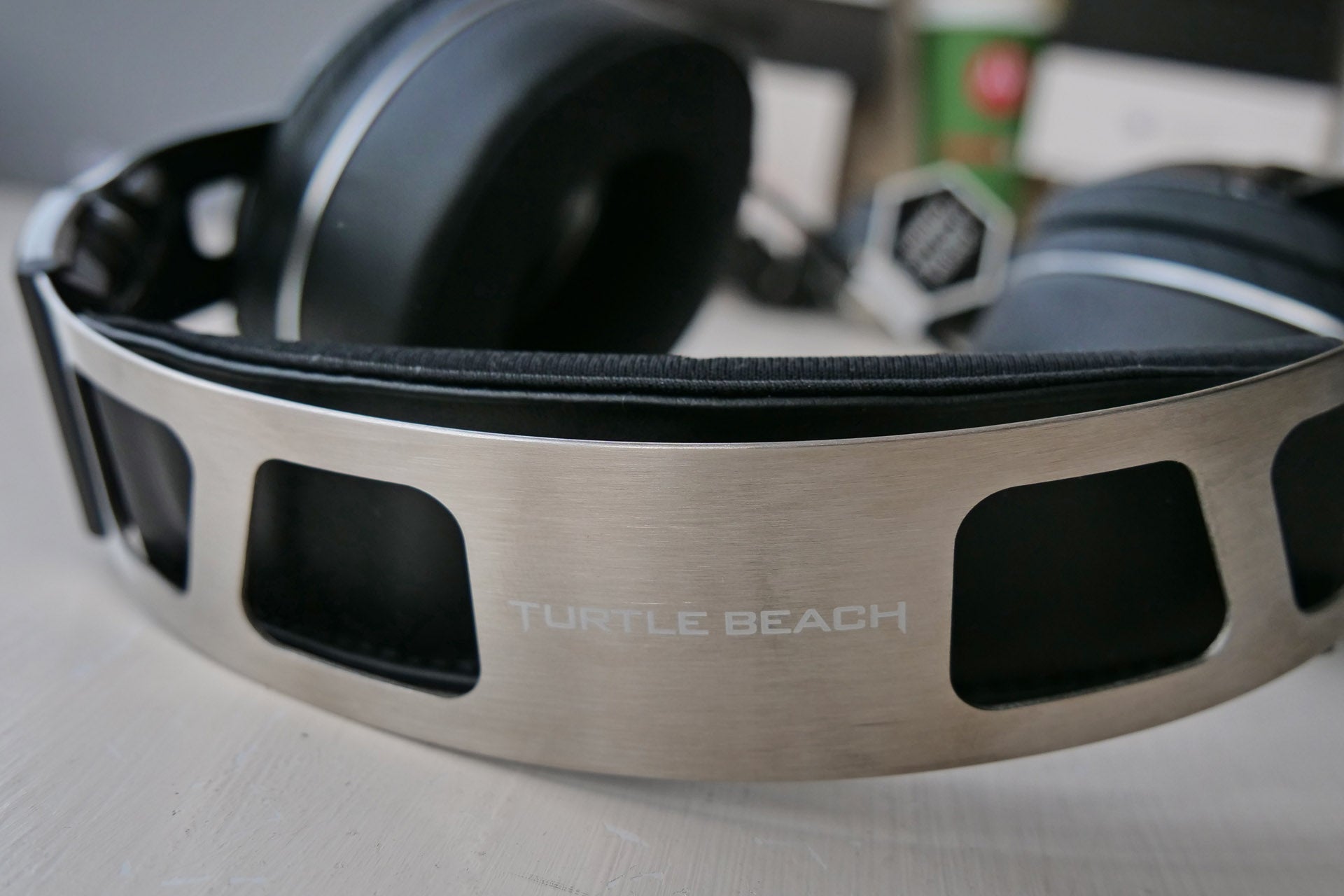 Mic pickup is perfectly clear, without too much in the way of background interference. Although if you’re playing in the same room as a hyperactive three-year-old, you may want to rethink your strategy – or seriously adjust that mic sensitivity.

If you’ve got cash up the wazoo and you don’t mind the slightly unusual setup, then we can definitely recommend this headset for competitive PC and PS4 gamers. Audio quality is strong, with solid surround sound support and the ability to tweak all manner of settings via the Turtle Beach app. Comfort levels get a big thumbs up too, for extended play sessions.

A fantastic, but expensive gaming headset.