What is the Turtle Beach Ear Force Stealth 420X?

Nearly two years on from launch, wireless Xbox One headsets are still a rarity. To date, Turtle Beach has only released two. With the Ear Force Stealth 420X, that range extends to three, while also being the cheapest at £150. In gaming headset terms, that’s usually a good trade-off between performance and value.

Thankfully, the Ear Force Stealth 420X lives up to expectations for the most part. It improves on the £200 Stealth 500X headset in some ways, with a more stylish design, more comfortable leatherette ear pads, and more sensible button location. However, it’s also a step-down, most notably lacking the virtual surround sound processing that first-person shooter fans love.

If you’re an Xbox One gamer who values wireless above all else though, the Ear Force Stealth 420X won’t let you down. It has great range, long battery life and excellent sound quality. It’s still not cheap, but it does offer the best value in the limited Xbox One wireless headset market. 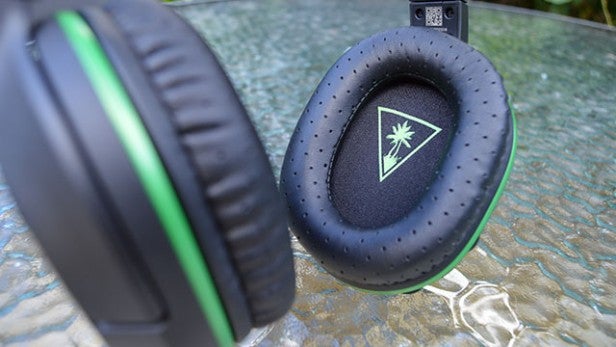 If you’ve been an Xbox One gamer since launch, then chances are you’ve been frustrated by the state of the gaming headset market for the console. At first, Microsoft didn’t support standard headsets at all, then it introduced a special adaptor, and only earlier this year did it finally start partnering with Turtle Beach to make wireless headsets.

The result was the Turtle Beach Ear Force Stealth 500X, a headset that we liked because it completely cut the cord between you and the console, but didn’t like because of its £230 price point. Since then, we’ve also had the excellent Elite 800X come in at only £20 more and redefine our expectations for a wireless gaming headset. From Bluetooth to active noise cancellation and a magnetic charging dock, the Elite 800X had it all. And now we have the Ear Force Stealth 420X, the most affordable wireless Xbox One headset yet at £150.

NB: A quick note on prices. The Stealth 420X is exclusive to Argos and Turtle Beach’s online store, which means that there’s no way to shop around and make a saving. The Stealth 500X, meanwhile, is now readily available for £170 online, while the Elite 800X is £220.

The Ear Force Stealth 420X is a good looking headset, and it’s still rare that we’re able to say that about a Turtle Beach product. From the gaudy colour scheme to the abundance of logos and ridiculous amount of buttons, headsets like the Stealth 500X screamed “gamer”. But credit where it’s due, Turtle Beach has finally realised that not all gamers are 16 year-old boys playing 12 hours of CoD a day in their parents’ basements. The 2015 range, of which the Stealth 420X is a part, is something you could actually wear out-and-about.

The headset itself is made of solid but lightweight plastic and survived being thrown into a backpack without the need for a case. The leatherette ear cups are a big upgrade over the more expensive Stealth 500X, which had a more uncomfortable mesh finish. The buttons, which were all too easy to press accidentally on the 500X and 800X, have been moved to the back of the headset, which is much more sensible. 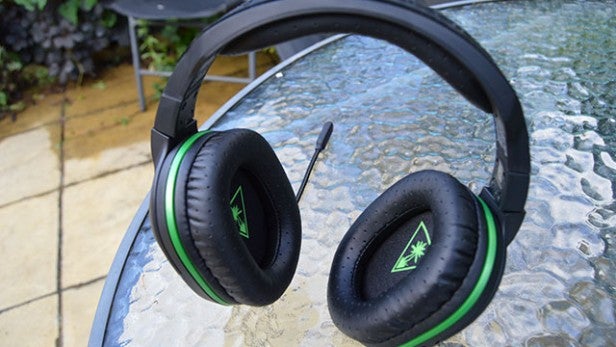 In fact, the Stealth 420X is a much sleeker package overall than the 500X. The wireless receiver/transmitter is a lot smaller than before. It’s about the size of a USB pen drive, and plugs directly into one of the Xbox One’s three USB ports. The mobile cable also boasts a really sleek microphone/in-line control, which allows you to take calls and control your music without having to get your phone out of your pocket.

The USB wireless transmitter may be small, but it works really well. The stated range is range is up to around 30 feet, which is possible, but probably not in your average AV setup. We struggled to go into the next room without some interference when the Xbox One was in a cabinet surrounded by other wireless devices. However, when we moved the Xbox One to a less packed environment, we were able to go into other rooms and even across floors just fine. The transmitter will hop across bands in order to get the best signal, but it’s a shame that the package doesn’t include a USB extension cable, just so you can get it into a better position for wireless coverage.

The headset charges using an included micro USB cable, and offers up to 15 hours of use. But we actually got over 16 hours in our test. Bear in mind that you’ll be using up two of the Xbox One’s three USB ports, but if you have an official wireless controller, you can at least use the same cable for both devices. A full charge from the Xbox One only took about three hours too. 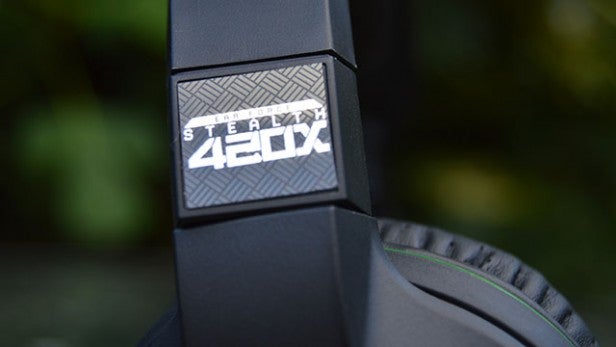 The feature set on the 420X is pretty much exactly the same as it was on the older 500X, except for one major difference. Whereas the 500X connected using the digital optical output of the console, the 420X uses USB. That means this newer headset only works in stereo. USB offers an ever-so-slightly easier setup, but the optical output offers gamers the benefit of a surround sound mix, which can help in certain games. It’s a shame, because it will disappoint a lot of serious gamers as well as those who watch movies through the console.

Otherwise, a lot of the audio features on the 420X remain very similar to the 500X. You can apply EQ presets to your stereo sources, including Bass Boost, Bass and Treble Boost, and Vocal Boost. A button on the headset cycles through these modes, while vocal feedback through the headset tells you what you’re selecting. There are also two volume wheels for controlling audio and chat volume independently. It certainly helps that you can hear yourself back through the headphones too, so you don’t find yourself shouting.

The headphones produce quite a bit of noise that may disturb those around you if you like to turn them up loud. You can continue to output sound via HDMI while using the headphones, so you don’t isolate anyone who may want to watch you play and hear what’s going on. The headset doesn’t boast active noise cancellation, although this is only on the Elite 800, which costs £70 more.

The 420X also includes a wired headphone cable for use with a mobile phone. And, if you like to have your gaming interrupted by clients/partners/parents, then you can take phone calls as you play your game. 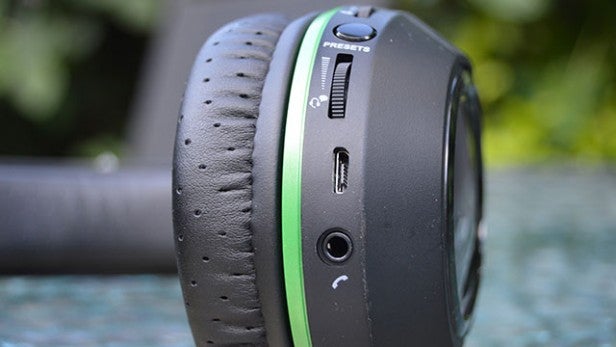 The Stealth 420X may be cheaper than the 500X, but there’s nothing between them when it comes to sound quality, and the excellence we saw on the older model has filtered down to this cheaper version. As a result games sound spectacular, as does music from your mobile phone on-the-go, not to mention being customisable using the four presets.

Sadly, there’s one pretty big caveat, and that’s the lack of surround sound processing, which is a really big loss. Going back to the real-world price points mentioned at the beginning of the review, it’s only £20 more to get this feature from the older 500X headset, and while we much prefer the styling and comfort of the 420X, we’d prefer the surround sound features, from a pure gaming audio perspective.

The microphone is excellent. If you play a lot of team-based games, then your teammates are going to really appreciate your investment in this headset. The microphone is on an arm that can be moved into whatever position you like, and you can hear yourself back in your headset thanks to Turtle Beach’s Mic Monitoring feature. 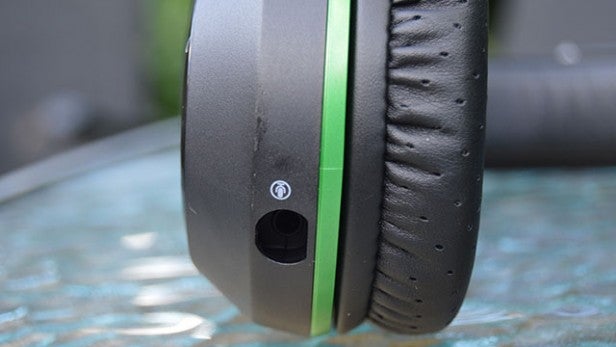 Should I buy the Turtle Beach Ear Force Stealth 420X?

Turtle Beach’s Stealth 420X takes most of the features of the older and more expensive 500X model and packages them in a new sleeker model for a cheaper price. The result is a stylish looking headset that sounds great and performs strongly in wireless range, battery life, and voice communications.

However, it also lacks one big feature in the form of virtual surround sound. In the real world, the 500X offers this for only £20 more, and while the 420X is more stylish and comfortable, the lack of surround sound is a big loss for gamers. If your budget can go beyond that and stretch to an extra £70, then the Elite 800X offers active noise cancellation, Bluetooth compatibility and DTS Headphone:X 7.1 Channel Surround Sound, all inside a much more luxurious headset.

If value is your main priority then the Stealth 420X is the most cost-effective way of owning a wireless Xbox One headset, but if you like virtual surround sound, be prepared to spend a little bit more.