Way back in 2004 Oakley decided that as a cool kind of company it needed to get a digital product out on to the market. It wanted something that its surfer dude and dudette clientele would think was rather funky. The product it came up with was the a pair of sunglasses with a built-in MP3 player that it called the Thump, but which unkind hacks dubbed the Chump because it looked so odd. Not to be put off Oakley went on to produce another pair of shades that did away with the MP3 player, but added Bluetooth so you could use it with your mobile to take calls and listen to music via A2DP streaming. 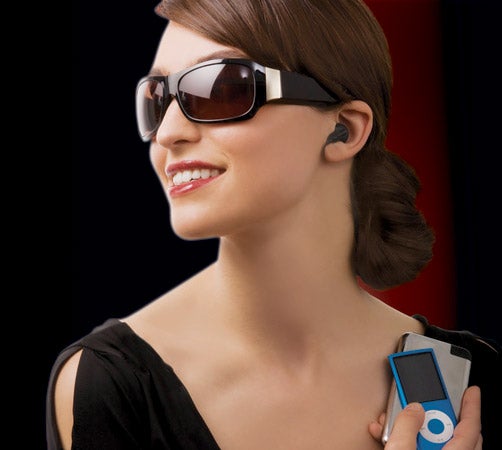 Oakley still makes these types of eyewear, but TriSpecs has also now stepped into the market with its TriSpecs shades that double as a Bluetooth headset with music streaming support.


The TriSpecs are available in male and female versions with a choice of six colours including black, white, blue and red. There’s also four different lens colours available ranging from lighter to darker tints. Currently Expansys is only stocking the black version with standard darker lenses, but the review sample they sent us was actually the white version with slightly lighter lenses.

It has to be said that, like the Oakley Thump, these specs look a bit odd the first time you get them out of the box. This is partly because the arms are much chunkier than those of a normal pair of sunglass (they’re around 8mm thick), but also because there are two earbuds hanging off the ends of these arms.


The arms have to be thicker because they house not just the battery that’s used to power the internal electronics, but also the call and music control buttons. The right side is home to the three music controls (forward, back and play/stop), while the left hand side has the three call controls buttons (volume up, volume down and call answer/hang up). There’s no on/off switch. Instead, to start up the headset you just pull the earbuds out from the rear of the sunglasses’ arms. 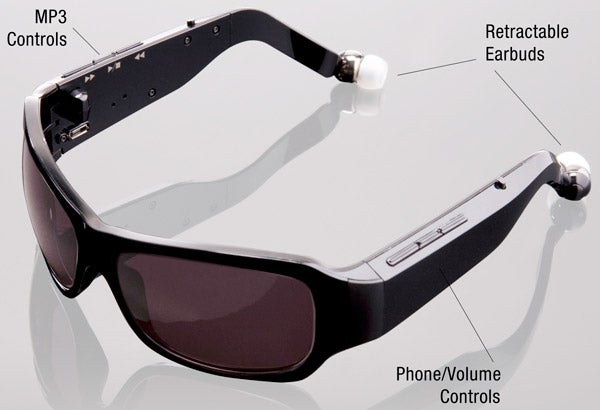 These earbuds are attached via wires that are connected to a spring-loaded mechanism – a bit like the power lead on most vacuum cleaners – so when you’re finished using them you press a small button on the top of each arm and the wire is quickly retracted back into the body of the sunglasses.


Thankfully, TriSpecs hasn’t skimped on the optics as the sunglasses use Sola Sunlenses, which are made by a division of Carl Ziess. These lenses are made from polycarbonate and as they’re impact resistant they should stand up to a bit of abuse. Naturally, they also filter out UV light to protect your eyes from damage by the sun’s ray, and they’re replaceable so if you scratch them you can order new ones from TriSpecs.

Pairing the sunglasses with a phone is very straightforward and the specs can store pairing information for up to eight devices at any one time. You can connect two devices to them simultaneously as long as they’re not similar in functionality. So for example, you can have them connected to a Bluetooth-enabled MP3 player and a mobile phone at the same time, but you can’t have them connected to two mobile phones at the same time.

As a headset for your phone, the sunglasses perform surprisingly well. There are dual microphones embedded in the frame (just under each of the hinges) and these are used in combination with noise-cancelling technology from a company called Step Labs. Even on a busy street or in a car with the window rolled down callers reported that the TriSpecs did a good job of blocking out background noise. Incoming callers also sounded very clean via the earbuds and there’s a decent amount of volume on offer, which is a bonus as some headsets can be a bit on the quiet side.


When it comes to listening to music, the earbuds performed pretty well too. Mids and highs cut through nicely and give good definition to the sound. Our only real complaint is that the bass can be a little weak at times. Whether the transport controls work properly or not will depend somewhat on your phone’s Bluetooth implementation, but we used them with an O2 XDA Zest and they worked without any problems. 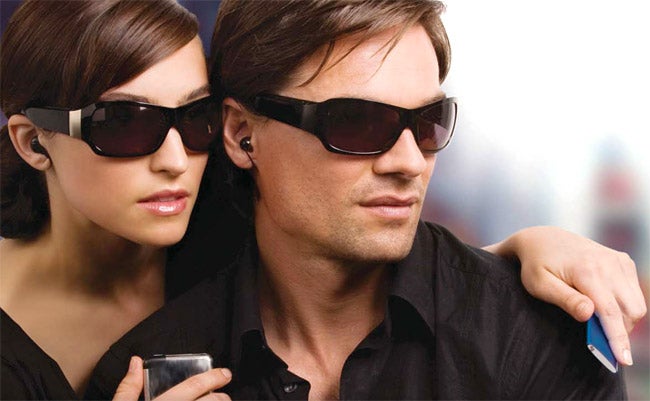 The sunglasses are supplied with a wall charger, but as this connects to them via a microUSB port on the right hand arm, you can also charge them via a spare USB port on your desktop or laptop if you like. Unfortunately, there’s no car power adaptor included in the box, but as these are quite cheap to buy it’s not a major omission. It takes about three hours to fully charge the specs and once they’re charged TriSpecs says they’re good for around seven hours of talk time or five hours of music playing. During our testing period we got around six hours of talk time out of them and four and a half hours for music listening, which isn’t far off those quoted figures. This also compares favourably to Bluetooth stereo headsets like the Plantronics Voyager 855 and Bluetrek Duo Stereo.


There’s no doubting that the TriSpecs perform well as a headset. The noise-cancelling technology does a great job of suppressing background noise and callers sound clean and crisp via the earbuds. Music streaming also works a treat too. However, the problem with these sunglasses is that they just look so odd that we’re not all that convinced that integrating a headset into a pair of sunglasses is a good idea. Still, if you do want sunglasses with integrated Bluetooth functionality, these are, to our knowledge, the only ones on the market at the moment, so we guess on that front they’re on to something of a winner.