There is a famous scene in The West Wing where a bemused politician’s aid is told by a military official why ashtrays on nuclear submarines cost $400. “It’s off the USS Greenville, a nuclear attack submarine and likely target for a torpedo,” he explains. “When you get hit with one, you’ve got enough problems without glass flying into the eyes of the navigator and the officer of the deck. This one’s built to break into three dull pieces. We lead a slightly different life out there and it costs a little more money.” The scene could have been written about Tripleton’s Enigma E2 secure phone…

”’Features”’
Announced late last month the Enigma E2 is no ordinary phone, in fact according to its maker it is the world’s most secure mobile phone. This is not due to an add-on or app, the E2’s security is at a base level built into the hardware and using a custom secure operating system.  The result is extreme with 1024bit RSA asymmetric encryption and 256bit AES symmetric encryption with a further two-way user authentication. Unsurprisingly military, politicians and high end enterprise are the intended customers, rather than those living in fear of the latest Facebook privacy leak. 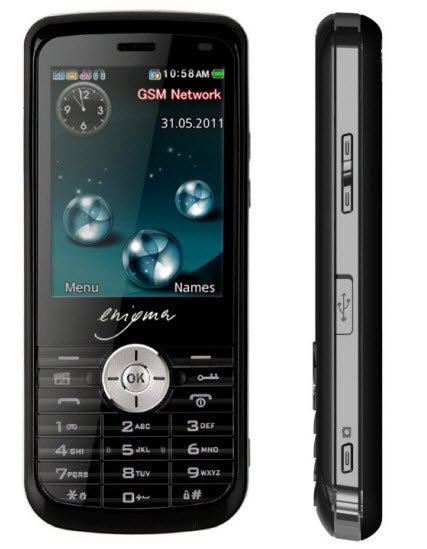 Interestingly, given all this technology, on the surface the Enigma E2 looks like a handset you might buy for an elderly relative. This is because when the E2 isn’t being uber-smart it is being extremely dumb. The specs read like a handset from a time when Nokia ruled the phone world: a 2.4in 320 x 240 pixel display, triband GSM (900, 1800, 1900MHz), a 3MP camera, microSD card slot, WAP 2.0 web browser, unified email inbox, FM radio and Bluetooth. There is MP3 and MPEG4 audio and video playback, but we can’t see much of the latter being done on such a small screen.

”’Design”’
The build quality is also nothing to write home about. The E2 is 100 per cent plastic with four different finishes and the faux-metal side band is a bit tacky. Furthermore the video and camera buttons on the side are small and the microSD card slot cover feels particularly flimsy. The screen is also very dull by modern handset standards and the low screen resolution feels jarring in 2012. At 94.5g and 115 x 50 x 14.7mm the E2 isn’t particularly light or compact either. 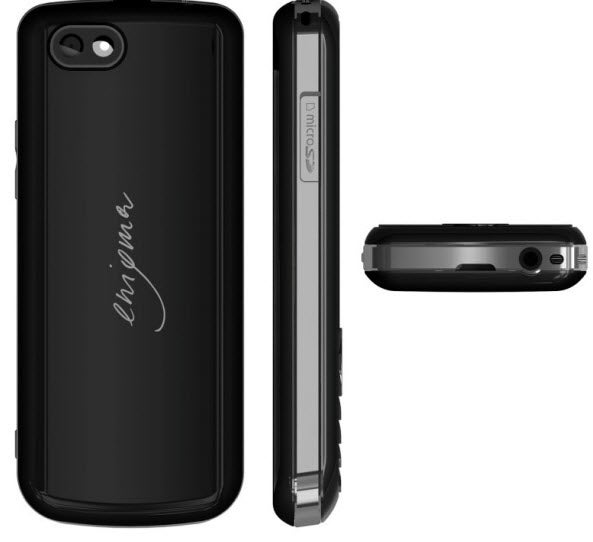 Furthermore encrypted calls take their toll on the battery life with it lasting for only up to five hours of talk time, though standby is healthier at up to 250 hours. At least it charges over microUSB, though like the microSD card slot it has a similarly flimsy cover. As you might have guessed by these covers, the E2 isn’t ruggedised to withstand additional impacts or to be water resistant.

Of course in theory none of this matters because, like the $400 ashtray, the value is in how it performs and what makes Tripleton’s approach to the Enigma E2 so impressive is its simplicity. No passwords or codes are required, a user simply dials a number or selects it from the contact list and presses the secure call button (indicated by a key symbol). Should they wish to make a standard call they press the standard call button instead.

”’Security”’
We aren’t military grade hackers so we can’t try to smash our way through the encryption, but we can tell you more about the three core elements which make it work: Digital Identification, Authentication and Voice Encryption. Digital Identification is ensured as the E2 actually uses a second, highly secure ‘Crypto’ SIM card locked deep into the body of the phone that is used to authenticate each user in a secure call and any unauthorised attempt to access this card will result in its self destruction (yes, we’re in Mission Impossible territory here).

In terms of Authentication, the Crypto sim uses 1024bit RSA, an encryption that has never been broken, and has 1077 possible key combinations. This pairs the two handsets in the call and the call itself is protected by 256bit AES encryption which is uniquely generated for each call using a hardware random number generator. The result is ITSEC certified end-to-end call encryption, but as you may have guessed by now, the sizeable caveat is to make these calls requires both users to have an Enigma E2 handset. 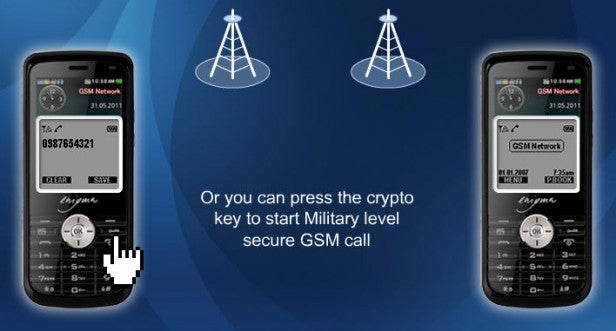 ”’Performance”’
In terms of practical performance, we were highly impressed. When making an encrypted call it adds about five seconds to the dialling time and roughly the same in completing the handshake between the two devices when the incoming call is accepted (a process indicated by short beeps before a long beep confirms you are connected). Considering the levels of encryption and key generation going on this is impressively fast.

In addition to this call quality is exceptional between E2s. The handsets use ‘CrystalSpeech‘ noise cancellation (developed by ARM) to remove background noise and while encrypted calls are typically associated with crackling lines and long delays in our tests there were virtually no delays and the call quality put most smartphones to shame. This is no doubt helped, by the lack of interference from other antennas found in these phones such as GPS, 3G, WiFi, etc but the results are no less impressive. Furthermore Tripleton claims future software updates will see the E2 gain encrypted text messaging and MMS. Handy, but would such customers risk using them? 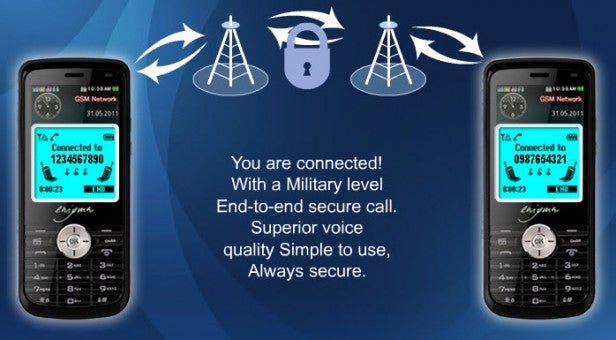 ”’Cost”’
All of which brings us to the Enigma E2’s biggest issue: price. Each handset costs a whopping £1,320, roughly three premium smartphones, and you will require two to make encrypted calls. We understand we are in $400 ashtray territory here and the potential customers for such devices will likely have no problem paying whatever is required to keep their conversations quiet, but we do feel in light of this Tripleton took some cheeky shortcuts. Most obviously the handset itself, at least externally, uses build materials and a screen we would expect on a £50 model on pre-pay. Meanwhile the packaging is basic, the bundled earphones with integrated mic are as cheap as the those found in most budget handsets and even the microSD card supplied is a jaw-droppingly stingy 2GB.

Then again, as we said, the Enigma E2 gets it right where it counts so will the intended audience care? We suspect not…

”’Verdict”’
Never has the word ‘niche’ been more applicable. On the surface Tripleton’s Enigma E2 has the looks and build quality of a £50 pre-pay handset, but costs £1,320 with two required for encrypted conversations. This really should be improved for the cost as should the cheap bundled headset and miserly 2GB microSD card. Yet to focus on these issues would miss the point, the E2 offers world class encryption which is both obsessive in its detail but simple to use and call quality is exceptional. Those who need this know it, will pay for it and likely care little about anything else.