Platforms: PC, Playstation 3, Wii U, Xbox 360
Perhaps the biggest complement we can hoist on Trine 2 is that it is to Trine what Portal II was to Portal: a game that builds on the strengths of a fairly small-scale but innovative project and transforms it into a bona-fide blockbuster. Without any hype and with very little fanfare, the team at Frozenbyte created one of the must-have PC games of 2011 – and a series of excellent console ports. What’s more, it’s delivered a Wii U version that is the best third-party port we’ve seen so far. 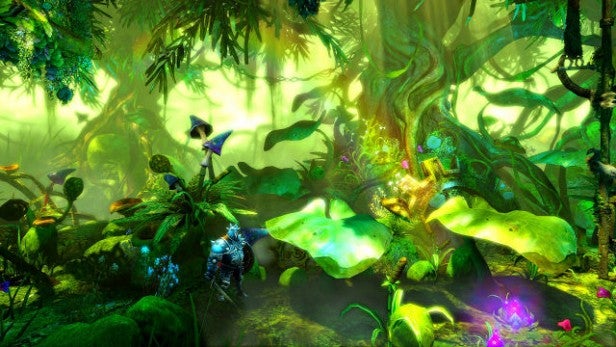 If you didn’t play the original, it was a fantasy-themed 2D platformer with a difference, featuring three heroes – a wizard, a knight and a thief – who you could switch between at will. Each character had distinct capabilities. The wizard could create boxes and levitate objects. The knight had a shield that could repel attacks and was good in melee combat. Finally, the thief could fire arrows, perform a kind of double-jump and use a grappling hook to swing between gaps or climb to otherwise unreachable areas. Switching characters and combining skills was the only means of traversing each level and making it through to the next objective 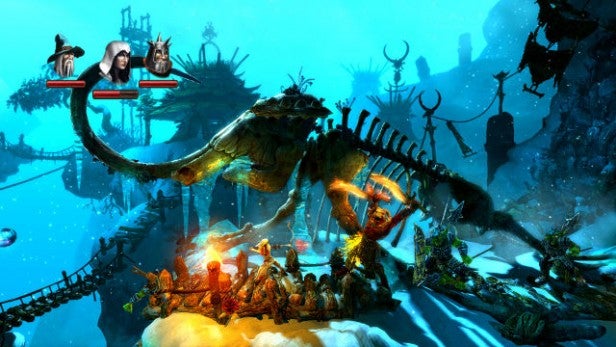 So far, so undistinguished, but we did say “with a difference”. For one thing, Trine made extensive use of simulated physics, with some very clever puzzles that had as much to do with weight and balance as with the usual block-shifting, switch-pulling nonsense that’s the norm for this kind of game. For another, it was extremely pretty, with beautifully rendered 3D graphics and a thick slathering of effects that made it one of the most attractive 2D platformers ever made. What’s more, you could play through the game with two players on a single PC, which turned the levels into more of a sandbox where players were free to improvise new solutions to the various puzzles. 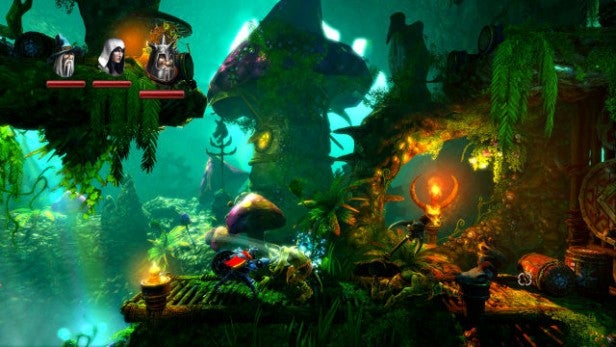 Trine 2 is basically a bigger, better and more beautiful version of the same. The three heroes return on a brand new quest, with all new levels and all new puzzles. The puzzles are back, but there’s a new confidence and flair at work, with some devilishly complex conundrums featuring blocks, levers, gusts of air, jets of fire and rushing water that will have you tearing your hair out at times. The graphics are even more impressive. Like Rayman Origins, Trine 2 sometimes makes you think that this is what you once expected games to look like in 2011 in the days when 2D platformers ruled the roost. Each level is beautifully designed and animated, with such sumptuous levels of background detail that you almost wish you had more time to admire the scenery. It’s genuinely gorgeous stuff.

The Wii U version is particularly impressive. The PS3 and Xbox 360 versions looked good, but lost a little of the PC original’s textural detail. The Wii U version, by contrast, seems to capture all of it, albeit at a lower 720p resolution, and the result is one of the most visually dazzling games on the new console. The scenery is as luscious and vibrant as on the PC, and the stunning lighting effects all shine through. For once we have a Wii U Port that comes without compromises. In fact, it’s arguably the best Trine 2 yet. 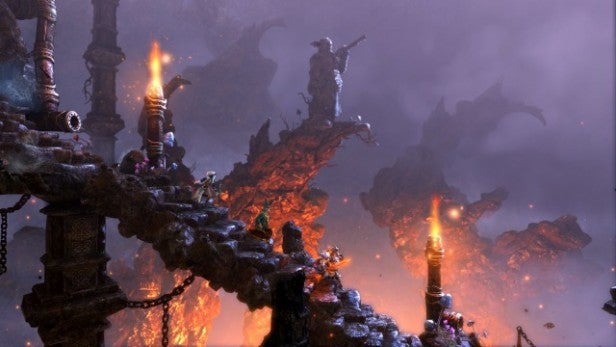 The reason why comes down to the controls. The PC version worked best with mouse and keyboard, but while this was great for accuracy when firing arrows or levitating objects, the running and jumping controls weren’t so ideal. The PS3 and 360 versions fixed this with proper gamepad controls, but you lost the fine-control you had with mouse.

The Wii U version delivers the best of both worlds, with analogue pad, triggers and buttons for leaping around, but also the touchscreen for drawing the wizard’s magical constructions on the screen and shifting them around. Firing arrows remains more of a challenge, with the right-analogue pad handling the aiming, but all in all it’s the best compromise on any platform. We’d still say that the feel and response of movement isn’t up there with Rayman or Mario, but it’s an awful lot closer now.

Most of all, Trine 2 just feels a lot more polished than the original. The narration and dialogue that ties it all together is smarter, funnier and more engaging, while the storyline is actually quite intriguing – not something we can say of many 2D platform games. The levels are also long and distinctive. Whether you’re pushing through a foggy swamp, knocking goblins off their fortifications and rearranging pipes to give a box a lift, or fighting through a dungeon filled with traps and water puzzles, each sequence gives you new and interesting treats. Add in the way the heroes upgrade over time, with a skill tree that opens new weapons, attacks and abilities, and it’s not a game you’re not likely to get bored of quickly. 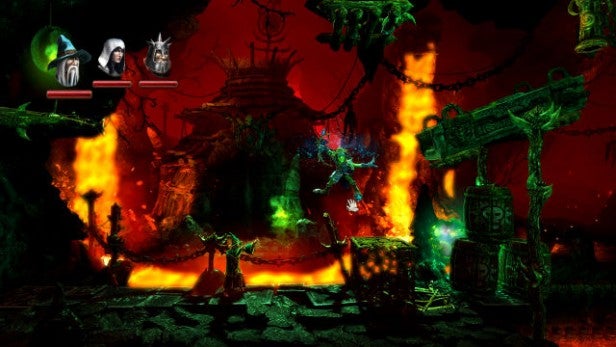 Multiplayer is the other great appeal of Trine 2. The PC game supported three players either online or on a single screen, and this carried over to the console versions, including the Wii U Director’s Cut. When you can combine the powers of, say, the wizard and the thief at once you can open up alternative solutions to some of the worst puzzles, and while this can leave one player stranded, there’s always a way to get them back into the action (in fact the game sees to do it automatically when needed). 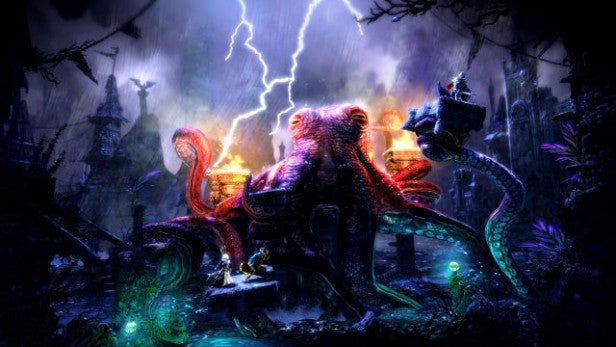 Playing Trine 2 in co-op mode reveals what a brilliant and sophisticated sandbox it can be. You can see the other players doing things you might never have considered – even if they’re pointless, self-defeating or simply bizarre. You have more time to get to grips with new ways of slaughtering spiders and goblins, whether it’s using your wizardly levitation powers to move them into traps, fiery blasts or sawblades, or simply sneaking up on them while your allies have them distracted. Basically, it’s a blast, and one of the finest co-op experiences this side of Gears of War 3’s Horde mode, FEAR 3 or Left 4 Dead. 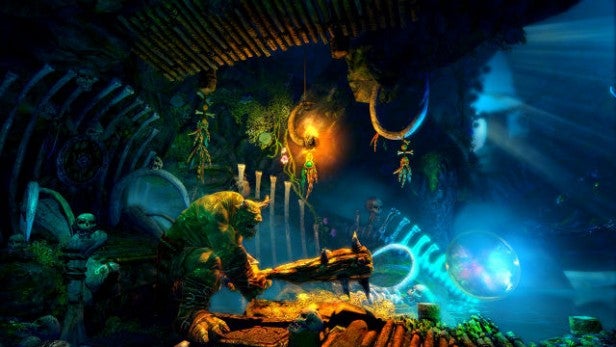 Trine 2 is a great game on any system, but the new Wii U version should stand up as a shining example of how to do ports right, enhancing the experience in a way that neither feels gimmicky or half-baked. As a bonus, the Director’s Cut includes the new Goblin Menace expansion, which becomes available when you finish the main game, and the option to play the game entirely on the Wii U Pad screen, which mirrors the TV display, is another real plus. Given the bargain price, it should be the first thing on your Wii U eShop shopping list.