If you’re into your digital photography, you’re likely to know what a remote trigger is. Essentially, this puts the shutter release button – the one you press to take a snap – on a wired or wireless remote, so you can take photos without being close to your camera. This is handy for all kinds of situations, but usually these remote triggers are proprietary and – at least for the ones offering more advanced features – somewhat expensive, easily costing close to £100.

UK company Triggertrap has an alternative that will work with most cameras using an adapter cable and offers a neat array of features using your Android or iOS smartphone, media player or tablet, all for under £25. Can its Triggertrap Mobile offering match more expensive solutions? 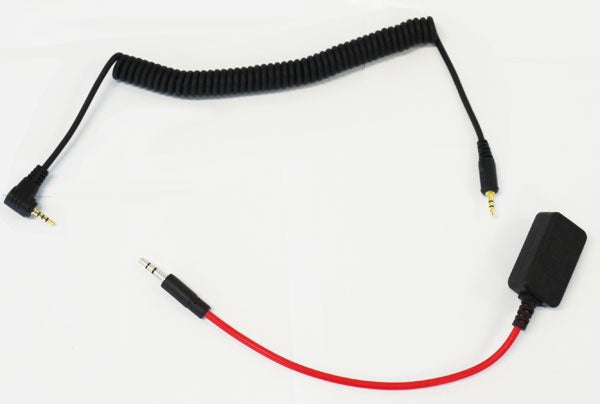 Originally a Kickstarter project, Triggertrap Mobile has been around a while and has constantly been evolving. First it was an iOS exclusive, but Android support has since been added. The ‘advanced’ version of the app used to make you pay extra, but now it’s available for free. And the Triggertrap team has added wireless triggering over Wi-Fi, though this gets a little complicated as you need at least two tablets/smartphones or a combination there-of.

The first component in the Triggertrap Mobile system is the physical part, or rather, parts. These consist of a £15 dongle and £15-ish cable, which come bundled for most popular advanced compacts and SLRs (including Canon, Nikon, Olympus, Panasonic and Sony) for around £25. Currently just over 280 cameras are supported.

The dongle is a small black box around the size of a pencil sharpener attached to a short 20cm red cable (the older model sports a black one). This sports a 3.5mm plug that plugs into your phone/tablet’s headphone/microphone jack. Into the other end of the dongle you plug the appropriate adapter cable, which in turn plugs into your camera’s trigger port. Setup is all pretty easy, though if we’re being picky the instructions could have been a little better on which end to plug into which bit for the less technically minded. 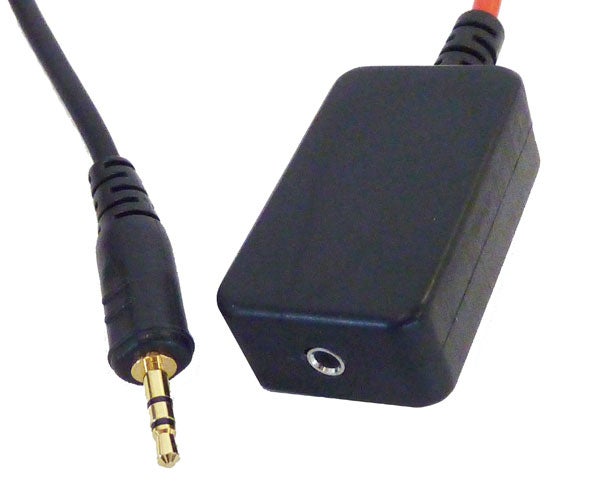 The coiled camera cable is thankfully a bit longer than the dongle’s and will stretch to over a meter, which is still a little on the short side. However, you can use a regular 3.5mm extension cable and Triggertrap is looking at adding matching extension cables to its store. Non-proprietary connectors are gold-plated on the cable, though not on the dongle, and build quality of both hardware bits feels solid.

Initially, the Triggertrap app was only available on Apple’s iOS store in a limited free version and fully-featured edition that set you back £3 – not a great feeling when you had just splashed the cash on the hardware, even if the combo was still miles cheaper than alternatives.

Thankfully, Triggertrap has now made the premium version free too – initially only for the Christmas period, but TrustedReviews has confirmed with the company that its apps will remain free from now on.

Unfortunately, the Android version, which was released later for free, doesn’t offer as many features as the iOS freemium app yet – for example, it lacks sound/motion/facial recognition triggering, a shutter lag meter, and multi-device wireless capabilities (your Android tab/phone will work as a Slave, but you need an iOS device as a Master). However, we’ve confirmed with Triggertrap that they’re working on bringing the Android version up to speed. 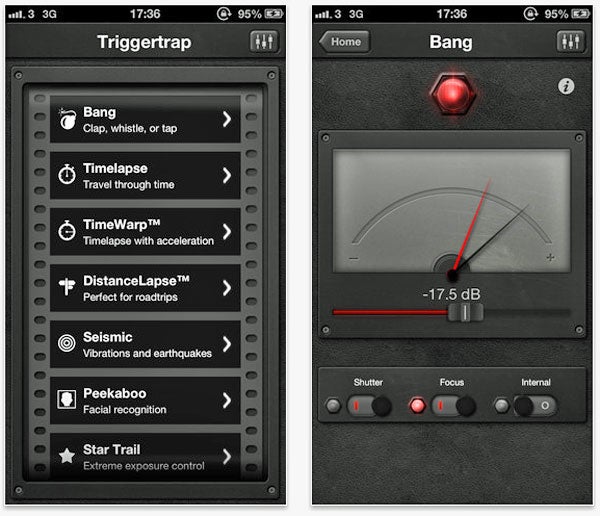 All three versions of the app are visually attractive and pretty easy to use. It’s also worth noting that when not connected to an external camera using the dongle, you can still use them to control the phone/tablet’s own integrated camera, so they’re worth getting regardless.

The Triggertrap app offers a range of features that far out-does what most traditional remote trigger cables and intervalometers bring to the table. First off there’s a number of advanced Timelapse functions in addition to the standard deal. For those wondering, Timelapse in this context refers to firing at a set regular interval to create a movie-like sequence of shots.

Getting to the Triggertrap’s offering, Timewarp uses mathematical algorithms to create a dynamic sequence according to your preferences; HDR Timelapse lets you mix HDR into the… mix; Bulb Ramping gets you exposure-based shooting; while Triggertrap’s unique DistanceLapse uses distance travelled rather than time as a measurement of when to take snaps – great for documenting road trips.

On the iOS version of the app, you also get multiple triggering methods in addition to touching the screen, including sound (clap your hands or whistle to take a pic), vibration (handy for shooting earthquakes as they happen), magnetism, motion and facial detection (always nice for portraits). Even multiple and metered exposures are available. 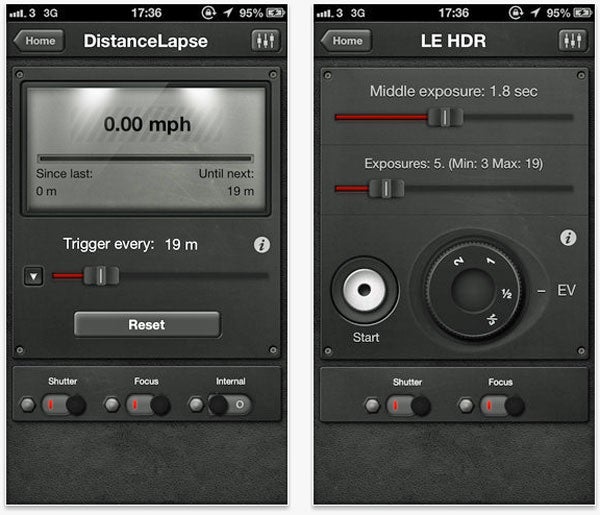 Triggertrap’s more exotic features can be a little temperamental but generally work, and they can be carefully controlled. For example, for sound activation you can set a decibel level, while with facial recognition you can decide the number of faces that will set off your shutter.

We just the modes didn’t sport silly names like Bang (sound activation) and Pikaboo (facial recognition). Also, for now Android users are stuck with touch as the only way to part-a-y.

You can really dig down into the advanced micro-settings of Triggertrap’s app in general too. Even on Android, you can adjust Shutter and Focus settings by deciding lag, trigger pulse length, and delays before and after triggering. 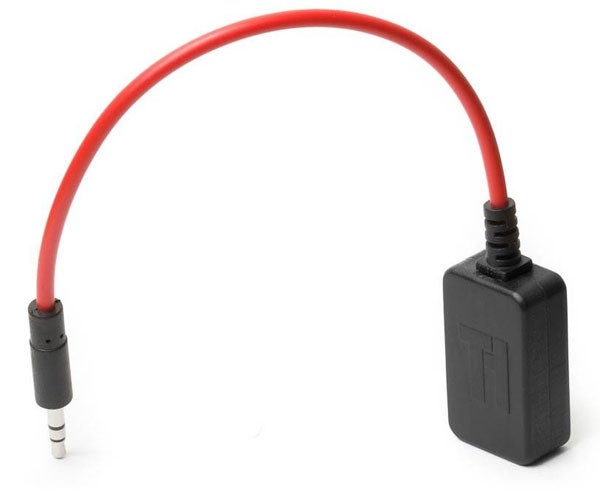 If you want your Triggertrap to act as an advanced wireless trigger, things get a little complex. Basically, you need two devices – a Master and a Slave, one of which must be running iOS – that are both hooked up to a Wi-Fi network. However, with many people owning a tablet and smartphone, this scenario isn’t too unlikely. For example, you could plug your Nexus 4 into your camera as the Slave, and then use the iPad 4 as the control and voila, wireless triggering is yours.

Of course, the sound-activated mode can also act as a basic wireless mode for pure triggering.

Compared to a traditional remote trigger, the £25 Triggertrap Mobile solution offers more features for a fraction of the cost. As such, it represents superb value for money, especially as the premium iOS app is currently free and the dongle part of the hardware will work with any camera – though you do need a compatible cable adapter, this also means that making Triggertrap compatible with a new camera system will only set you back £15.

Triggertrap Mobile is a nifty addition to any photographer’s toolkit, providing a genuine alternative to traditional triggers that not only offers more features, but does so for a fraction of the cost – as long as you have a smartphone, MP3 player or tablet running Android or iOS. Currently the Google app is rather limited compared to its Apple counterpart, but this is being rectified.