With its security camera and the promise of high suction, the Trifo Max should be one of the most interesting and powerful mid-range robot vacuum cleaners. Performance heavily lets the side down, and the Max couldn't reliably find its way around my kitchen, often missing entire sections, while getting stuck on grout. So-so cleaning ability on hard floor and carpets is also disappointing and there are better robot vacuum cleaners at this price.

Powerful suction puts this vacuum cleaner on the same level as its more expensive competition but the poor mapping and navigation are hard obstacles to overcome.

Design and Features – Some smart additions; some not so smart with the Trifo Max

Although the circular Max (350 x 350 x 90mm) looks much like other robot vacuum cleaners, the upward-pointing camera at the rear marks it out as something different. This camera isn’t for navigation or object recognition, as on the Roborock S6 MaxV, but is designed as a security camera, both for monitoring your home and to let you see what’s going on in your home while you’re out. 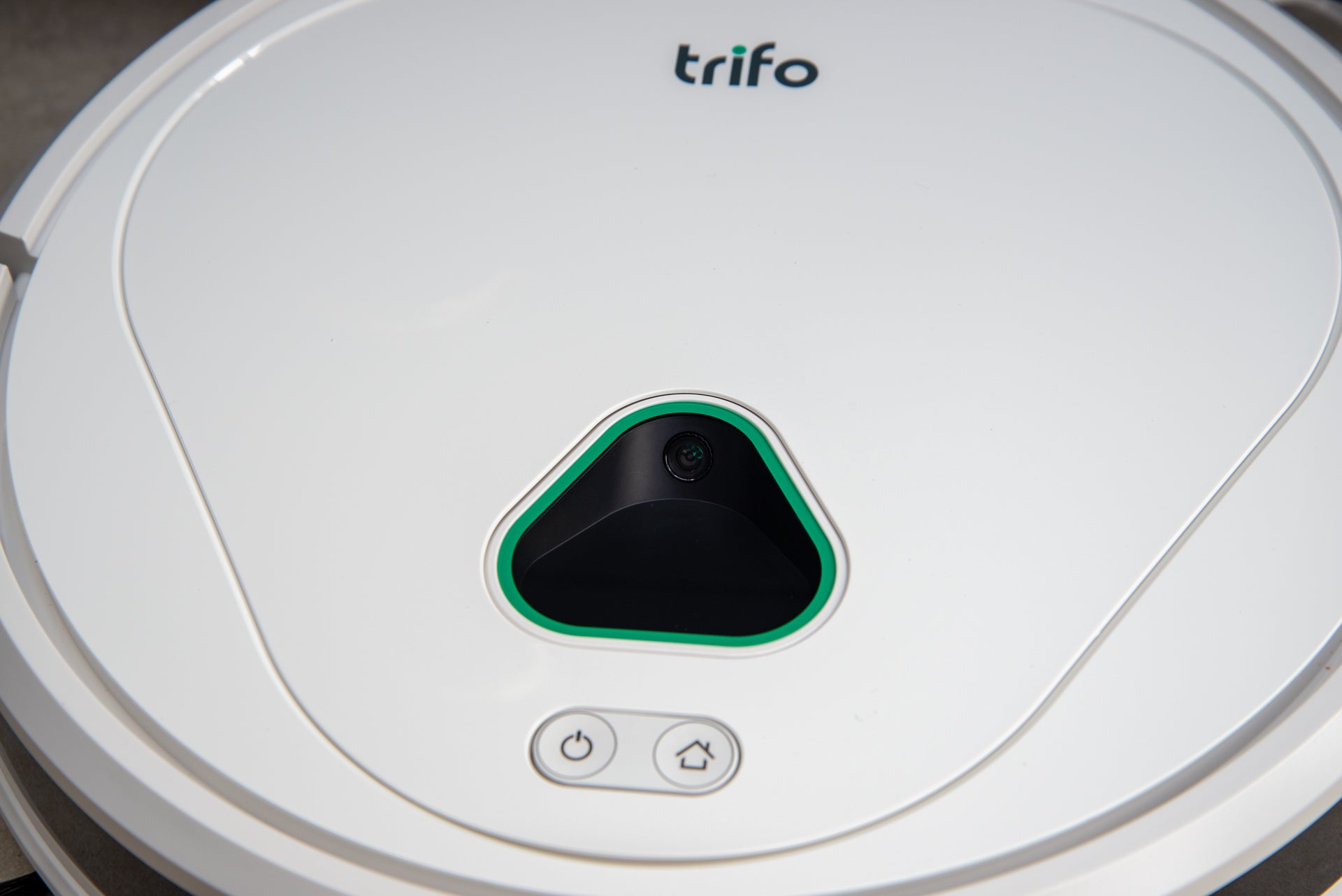 That aside, it’s business as normal for this robot vacuum cleaner. Turn it over and there are a single rotating brush bar and a side brush for getting into the edges. Trifo doesn’t provide a razor for cutting away hair wrapped around the main brush bar, so you’ll need to use a pair of scissors if it gets clogged. 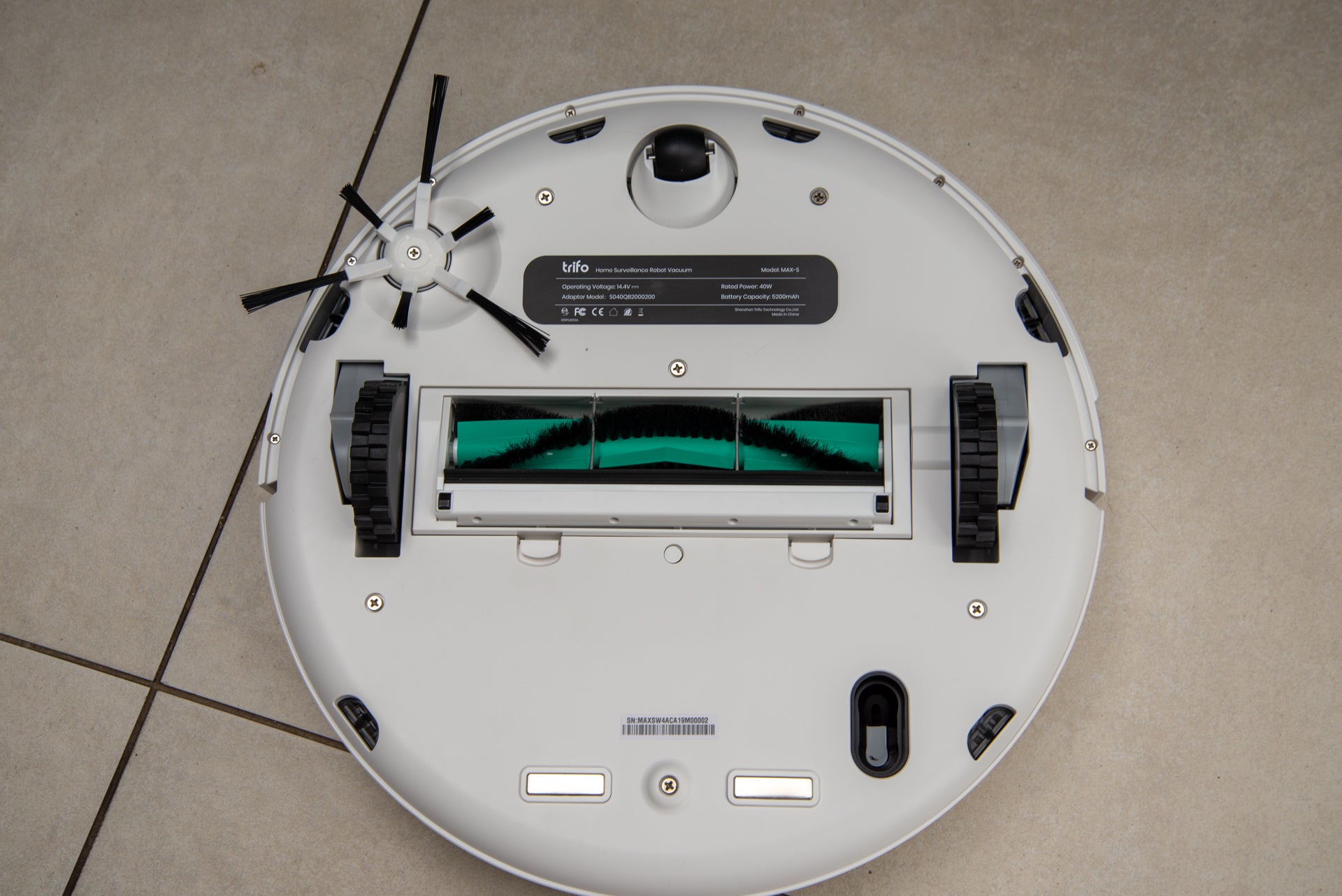 On top, there’s a flap to open to get at the dustbin. You have to get a fingernail underneath the flap, which is a little fiddly: a small indentation in the top would have made it easier to get this open.

There’s a decent-sized 0.6-litre bin, which pulls out easily. It has a simple flap at the front, so that you can easily open it and get the dirt out. 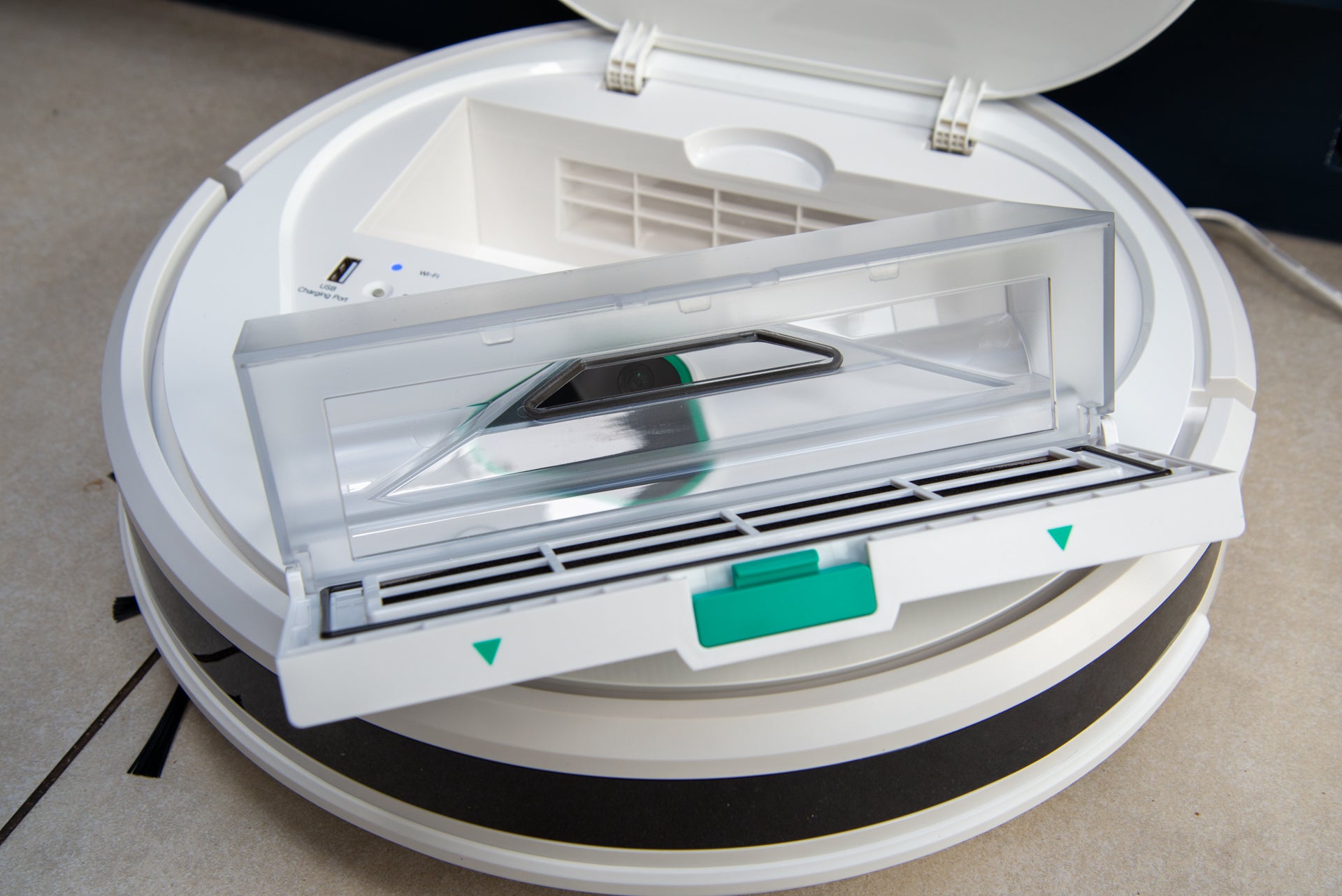 Trifo has also put a USB charging port under the lid, so you can plug in a phone or tablet for charging. I don’t recommend that you do this, as if you forget to unplug the robot before you start a clean, you run the risk of pulling your device onto the floor or having it dragged around behind the robot. 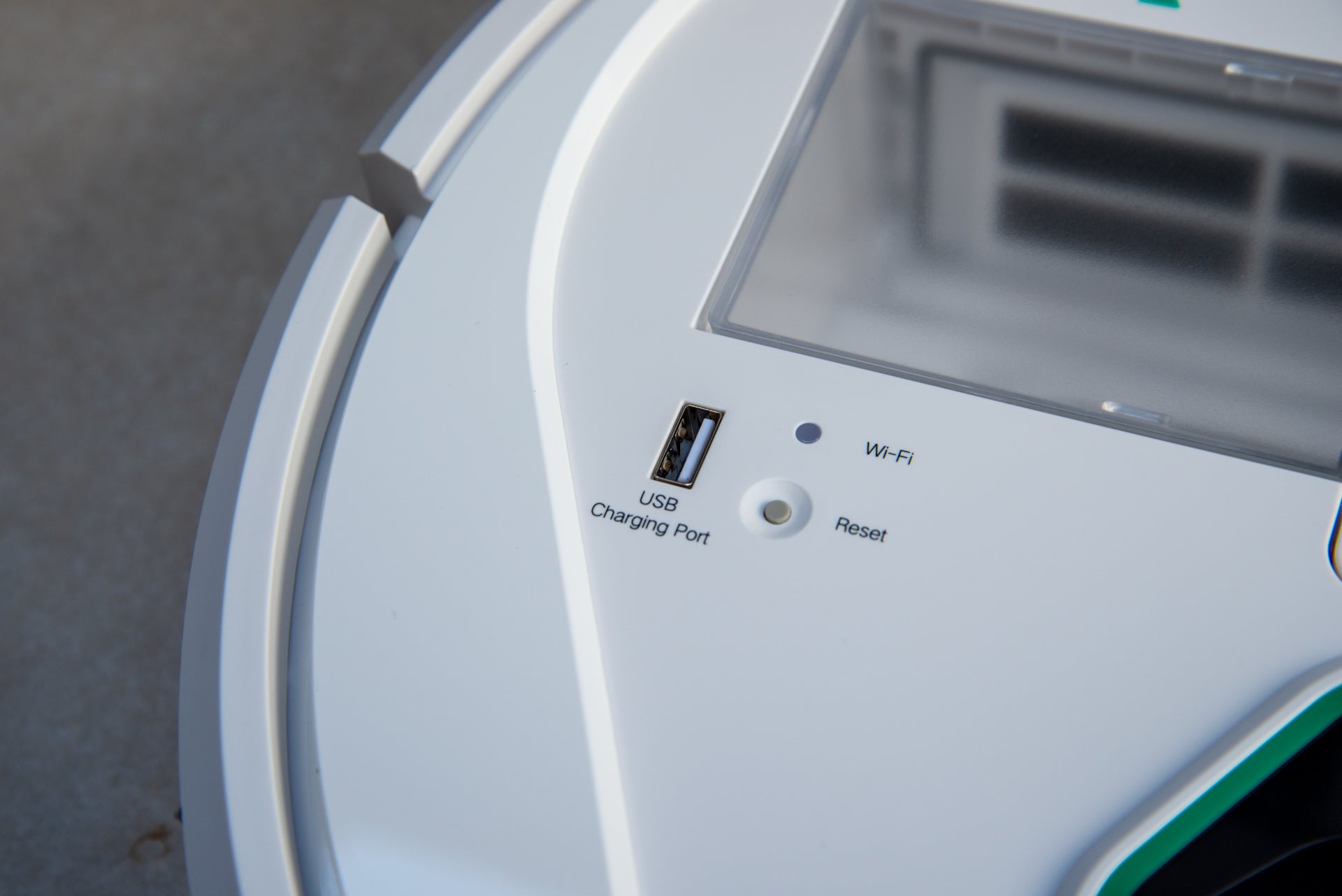 The Max is managed via the Trifo app. It’s pretty easy to get the robot connected: you plug it into the dock, let it play an irritating tune and then shout “charging” at you, and then use the app to generate a QR code on your phone then get the Max’s camera to scan it.

From the home screen, you can choose to remote control the vacuum or set it off on an automated clean. While the Max will draw a map to show you where it’s been, you can’t use a stored map to create zones or no-go areas. The last generated map can be used in manual mode to send the vacuum to where you want it to go, which is a little easier than manually controlling it.

Before you start a clean, you can set the vacuum’s power using the on-screen slider. This gives you very fine adjustment over power, but who needs this level of control? Use the schedule option and you get three power options: Quiet, Normal and Turbo. I’m guessing that these align with the lowest, mid and max position on the slider, but it’s not clear. 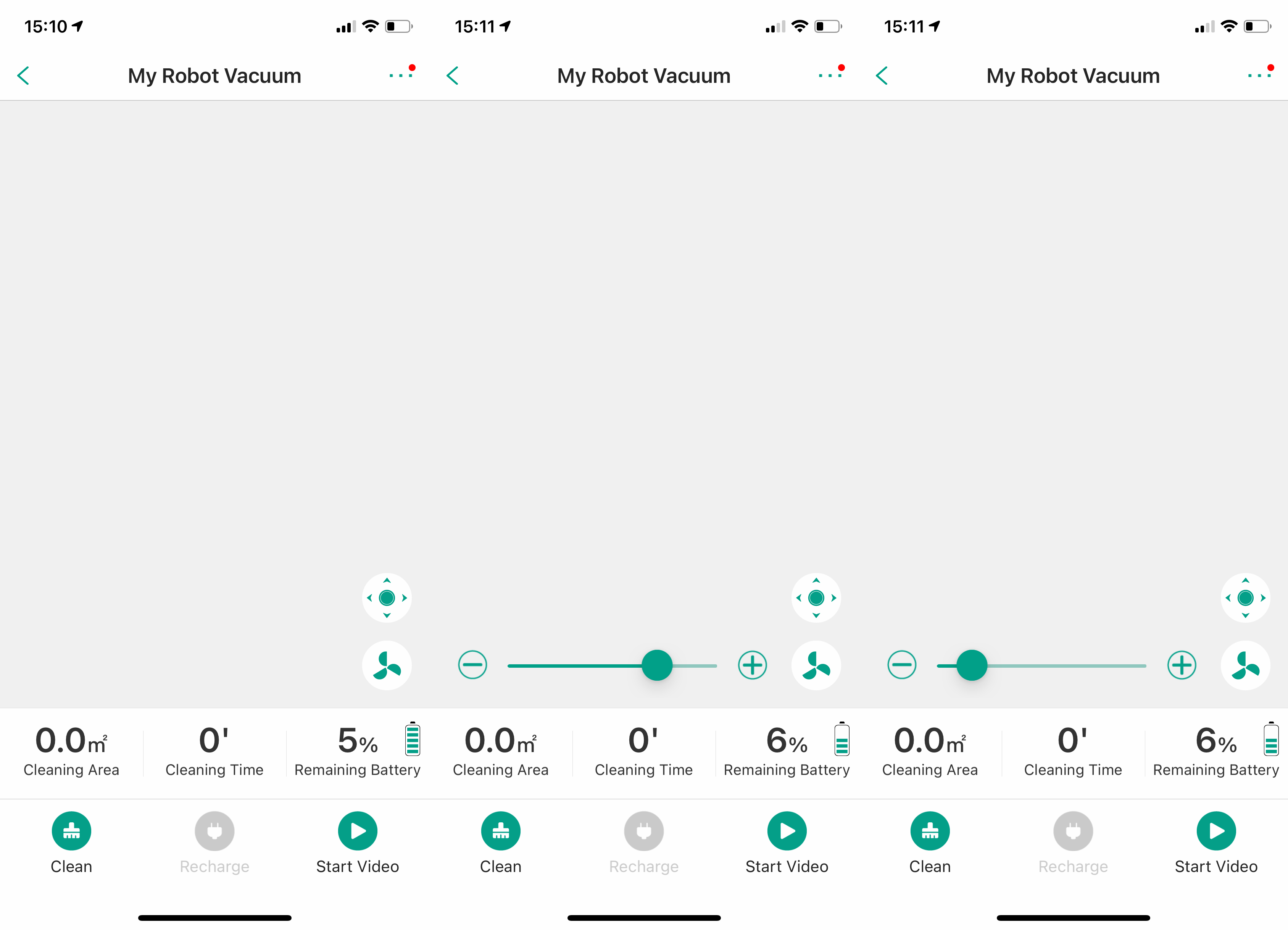 Starting a clean, returning to dock or doing anything else has the vacuum cleaner practically shout at you what it’s doing; the Quiet mode setting in the app comes as a blessed relief. There’s an Amazon Alexa Skill for the robot so that you can start and stop a clean, but there’s no Google Assistant version yet.

At any point during a clean, you can turn on the video feed to see what’s going on, storing video or photo directly to your camera’s photo gallery. Video is recorded at a low 640 x 480 resolution, so proper security cameras have nothing to worry about. If you want to be warned about motion, you can turn on motion detection. If anything moves past the camera, you get a notification and a thumbnail image of what the camera saw, but no video. 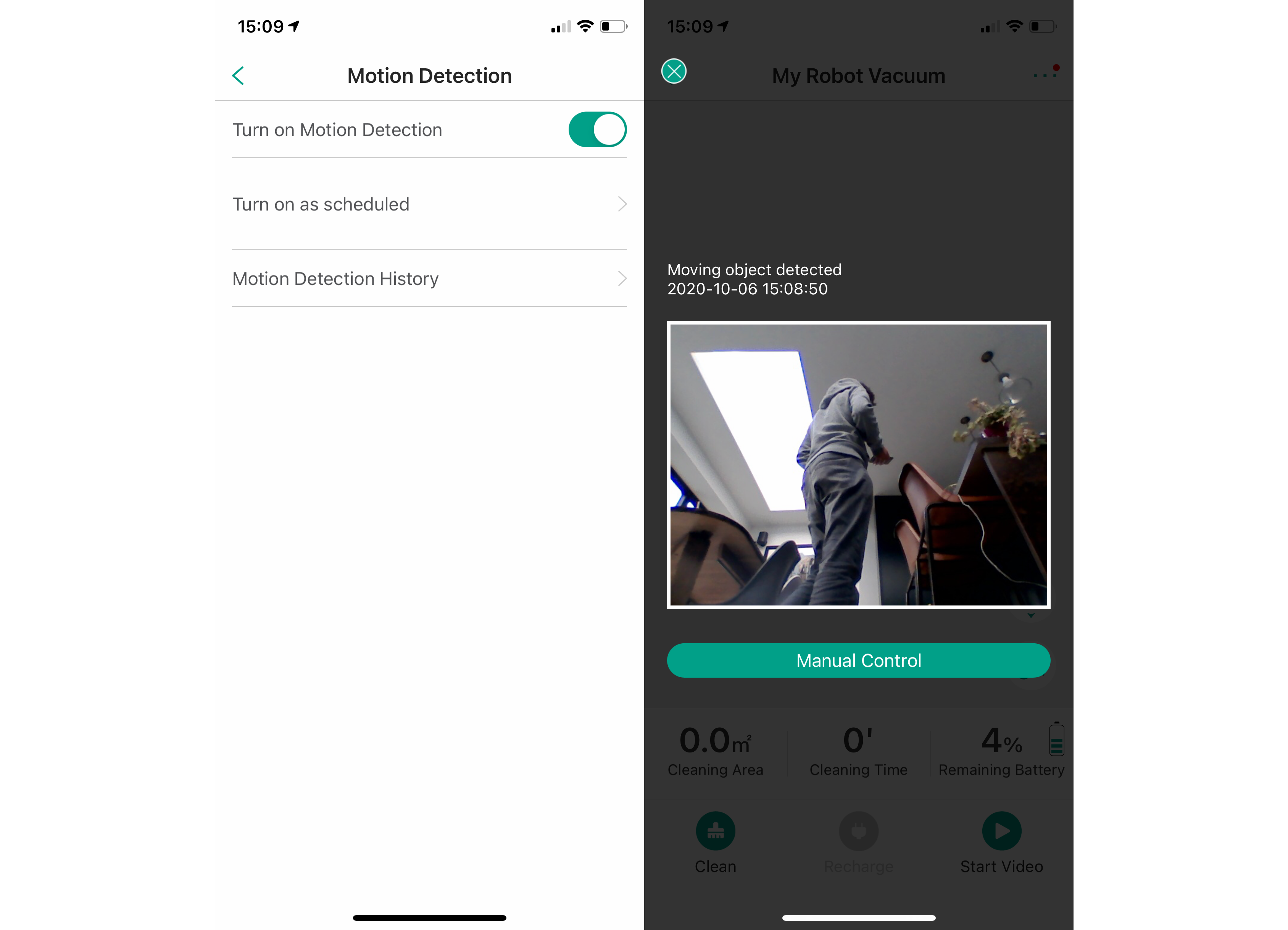 This means that you can’t guarantee to capture anything interesting and I captured the back of my head as often as my face. As the camera points upward from the floor, it has the slightly disconcerting effect of making everyone look like a giant.

One of the key things that a robot vacuum cleaner has to do well is navigate around your home. Sadly, this is the area that the Trifo Max fails in. On the first attempt, the cleaner got itself wedged between a table leg and the wall, and it called for help asking me to clean its wheels. 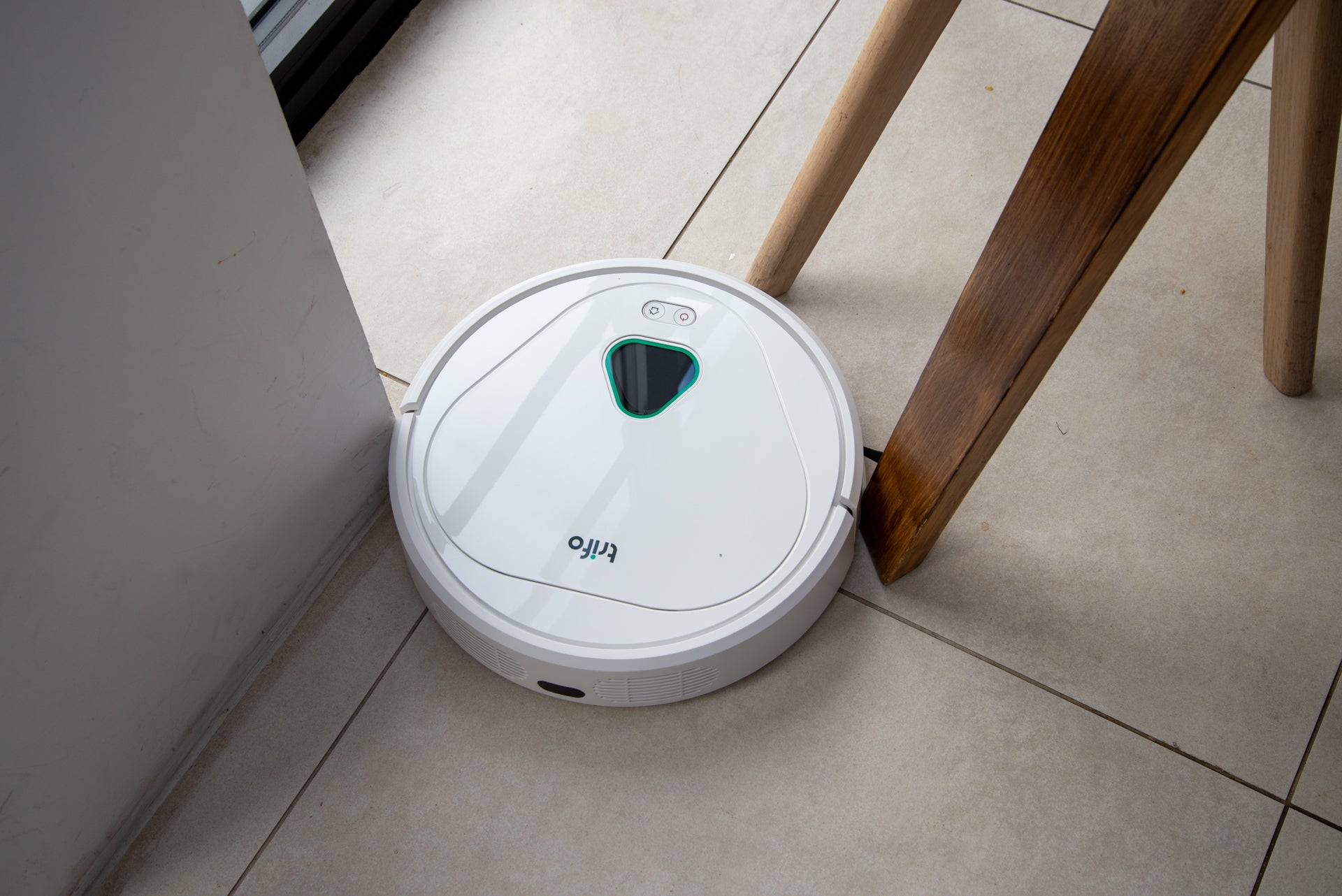 Second attempt, the vacuum came out of its dock, moved around near the kitchen doors, cleaned a very small area and then returned to charge with the clean, apparently, completed.

For the third go, the Max got around the table, then spent an inordinate amount of time under the table bouncing off various chair legs. That part of the floor was certainly well vacuumed. Rather than carry on around the kitchen, it was at this point that the Max decided the clean was over and headed back to the dock.

Well, it tried, but it kept on catching part of itself on the grout line in the tiles, causing the vacuum to back off and try again. In the end, I had to shove it over the grout to get it charged.

For multiple goes, the Max would not turn right out of its dock and clean around the kitchen island, despite it being a large unobstructed area. That’s frustrating, and the Trifo Max really should do better. 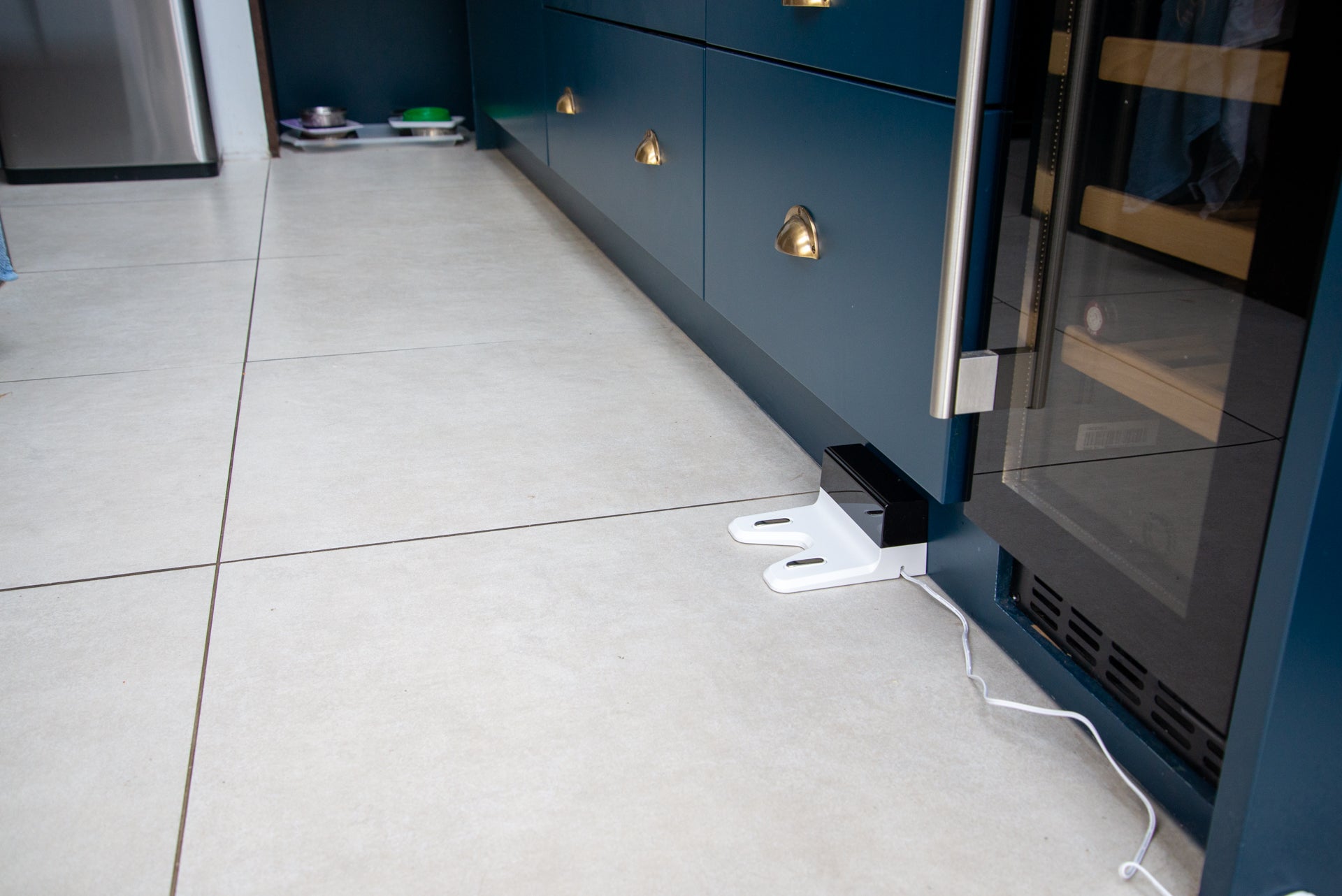 Shifting the dining chairs around a little finally got the Max to move up and around the island, although for this clean, the vacuum cleaner decided not to bother cleaning near the doors to the garden. Reliability is key in a vacuum cleaner, but this model can’t always get everywhere. 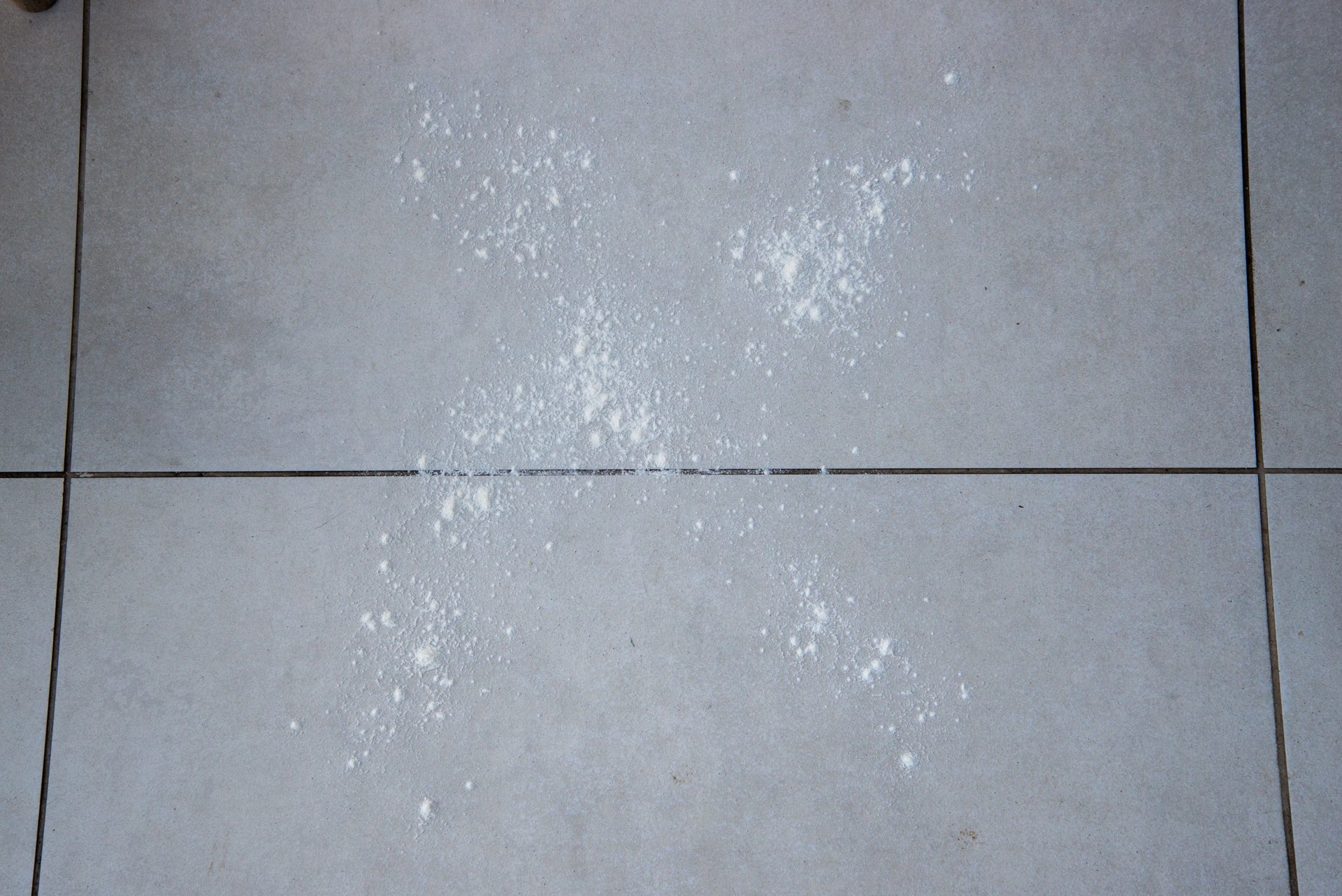 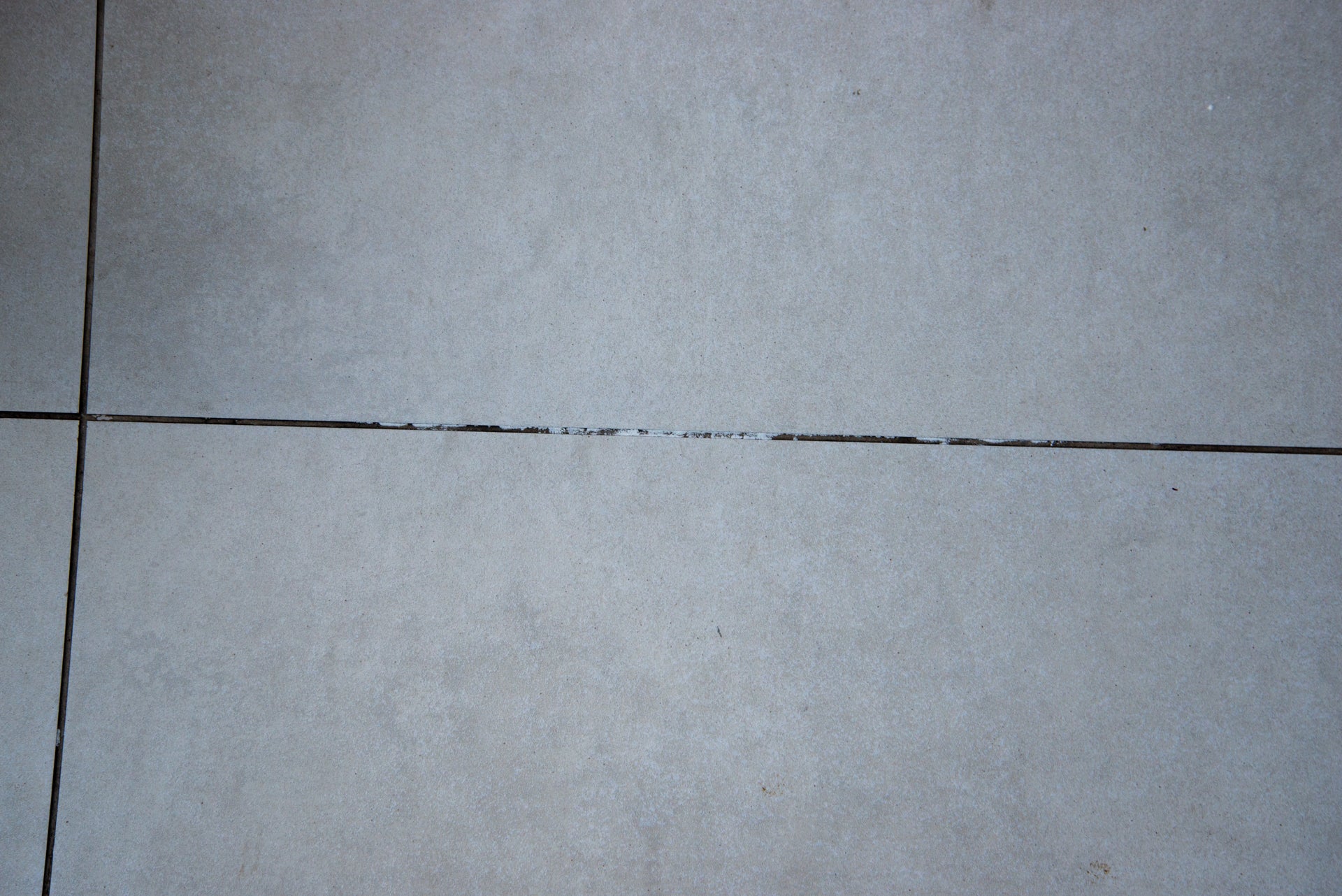 Edge pick-up was actually very good, with the bulk of the mess spread by the door to the garden gone. Credit where it’s due, that’s very good performance. 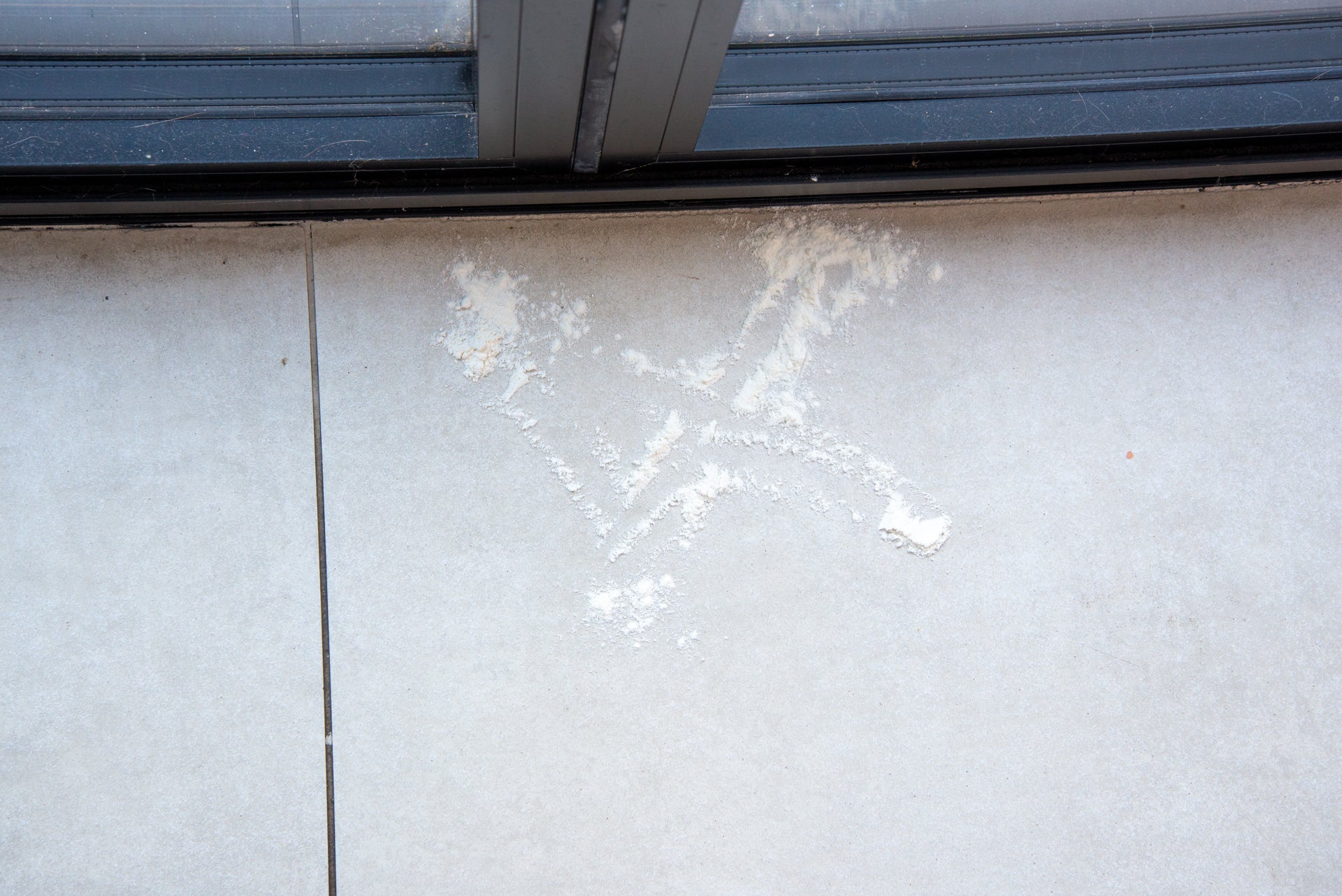 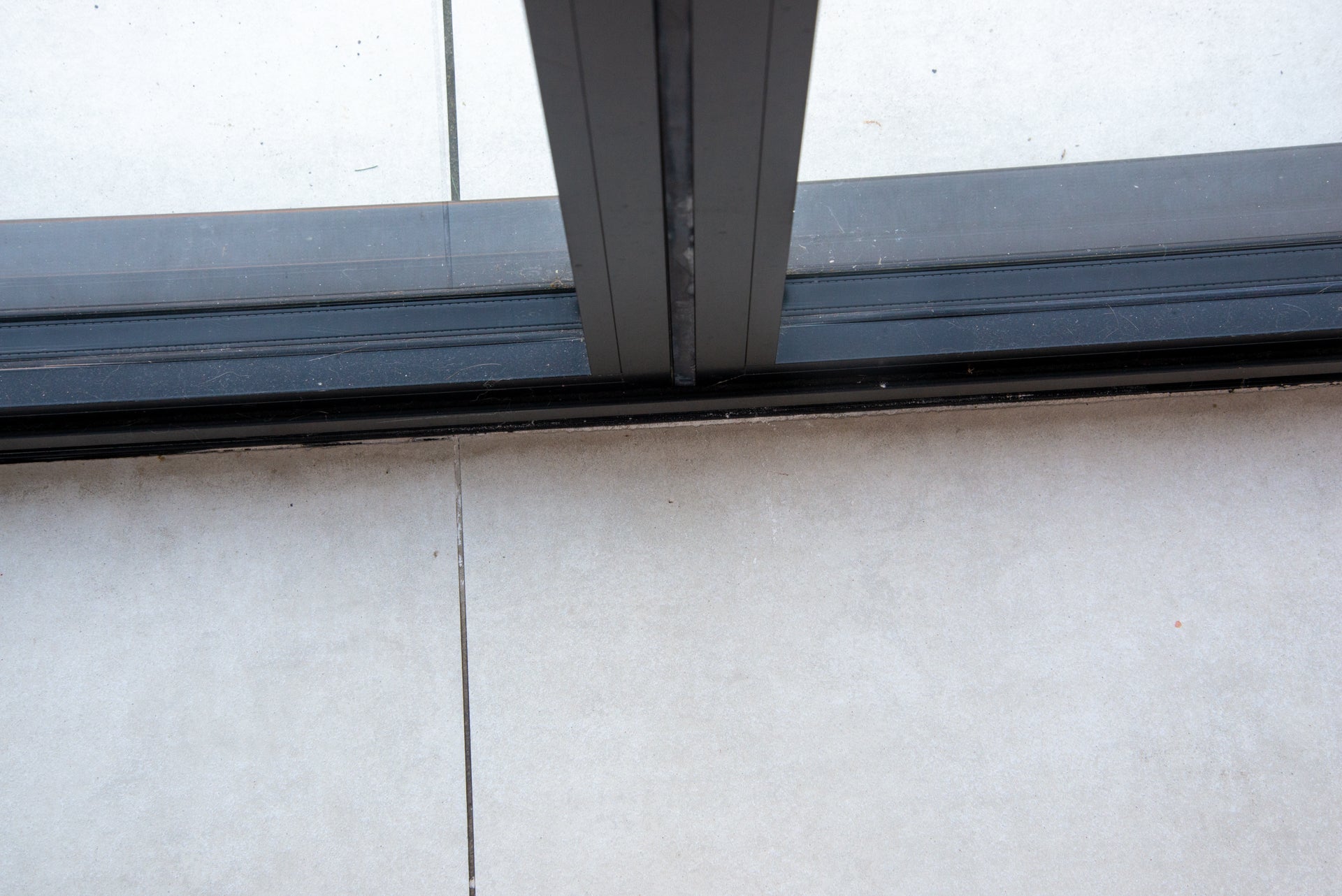 Carpet performance was alright, although as you can see, the Max left behind quite a bit of the flour and didn’t pull out mess that was caught in the deeper fibres. 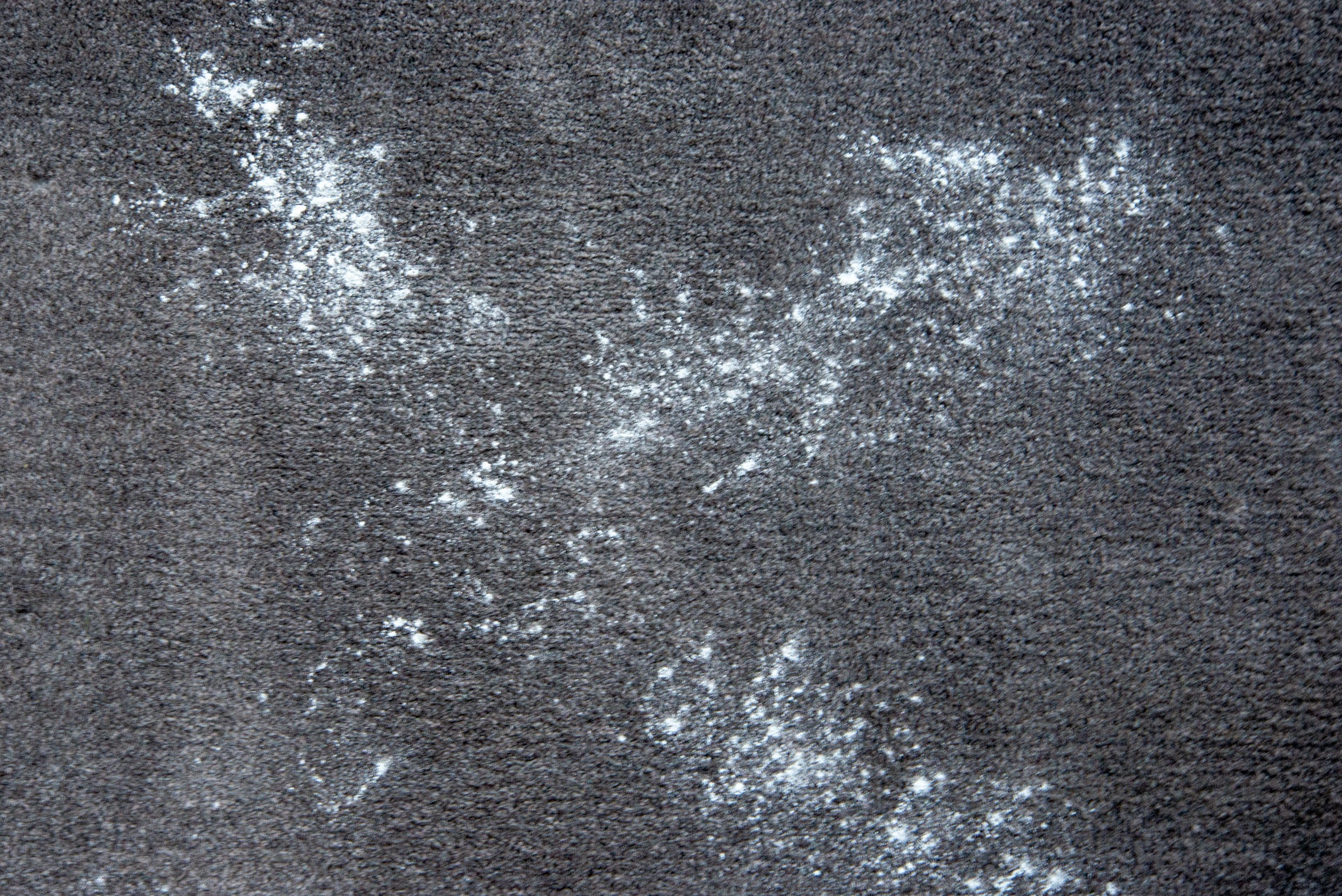 The battery can last for up to 120-minutes on the lowest power setting, but I found that on Turbo, there was enough juice to make it around my downstairs.

Firing up the app and recording video, I captured some video from the Max’s camera. As you can see, image quality is very bad, and it’s hard to work out any detail in people’s faces, partially because of the slightly strange angle that the vacuum cleaner shoots from. Sure, it’s enough to tell you if there’s someone that you don’t recognise in the house but if you want proper security, buy a real security camera. 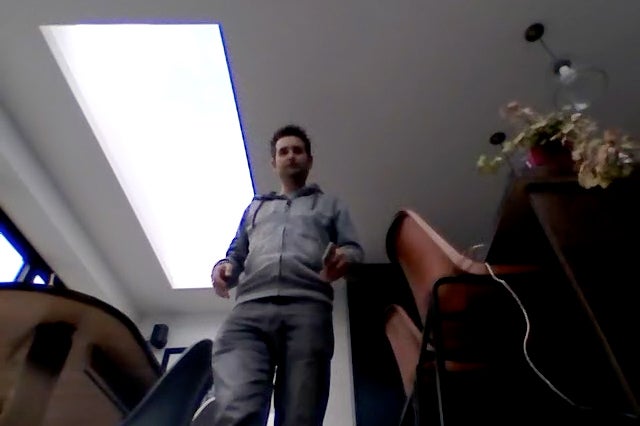 Should you buy the Trifo Max?

On the surface, the Trifo Max has everything that should make a good vacuum cleaner, including powerful suction. With the addition of the camera, it’s a product that moves beyond being a simple vacuum. Yet, I wish that the money that had gone into putting the camera system into place had been spent on better navigation.

Avoiding half of the kitchen, despite there being no obstructions, just isn’t acceptable. The area that the vacuum did move around still caused problems, with the Max even getting caught on a bit of grouting. Ultimately, the poor navigation lets the side down and the Max couldn’t reliably clean my house.

For just a little more money, you can buy the RoboRock S5 Max, which has better clean-up skills, far better navigation with proper zoning and no-go areas, and it’s even a half-decent mop, too, and there’s an even wider selection of the best robot vacuum cleaners in my list.