The Stormbox Micro is a surprisingly good wireless speaker from Tribit. Its rugged design suits outdoor use, and the tear-resistant strap mean it can be used in a number of ways (including strapped to a bicycle handlebar). The audio quality is much better than expected, making this a budget star.

The Tribit Stormbox Micro is a portable wireless speaker with a rugged design that costs only £39.99.

Tribit is not a brand we’ve been familiar with up until now. They emerged in 2017 and specialise at the cheaper end of the market with their products rarely troubling three figures.

The Stormbox Micro is a mini portable speaker (though not the cheapest in the range) and it aims to combine good quality sound and value. Despite their standing, the performance of the Stormbox Micro means Tribit is a brand that ought to be in reckoning when it comes to the best-sounding budget wireless speakers.

The Stormbox Micro comes in one flavour – black – and its fairly nondescript in its look, which at this price is absolutely fine. 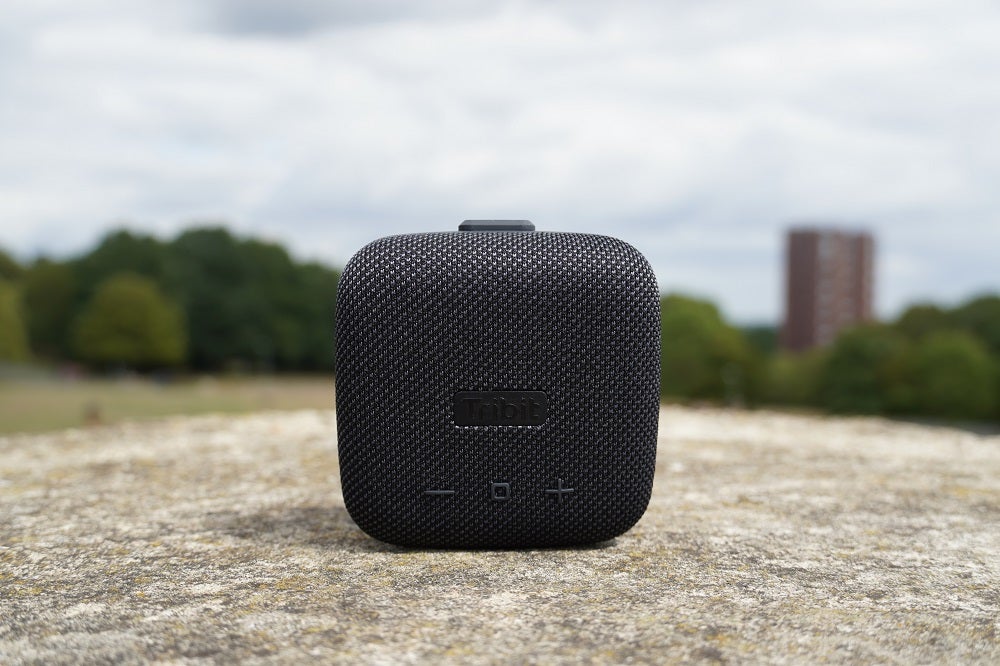 The speaker’s top surface is wrapped in a fabric that’s water- and dustproof, and features volume controls and a multi-function button. The underside of the speaker is covered in a harder, tougher material and is also where you’ll find a flexible tear-resistant strap, so you can connect the Stormbox Micro to the handlebar of a bicycle or to a backpack. It’s a thoughtful design touch that gives the speaker added versatility. 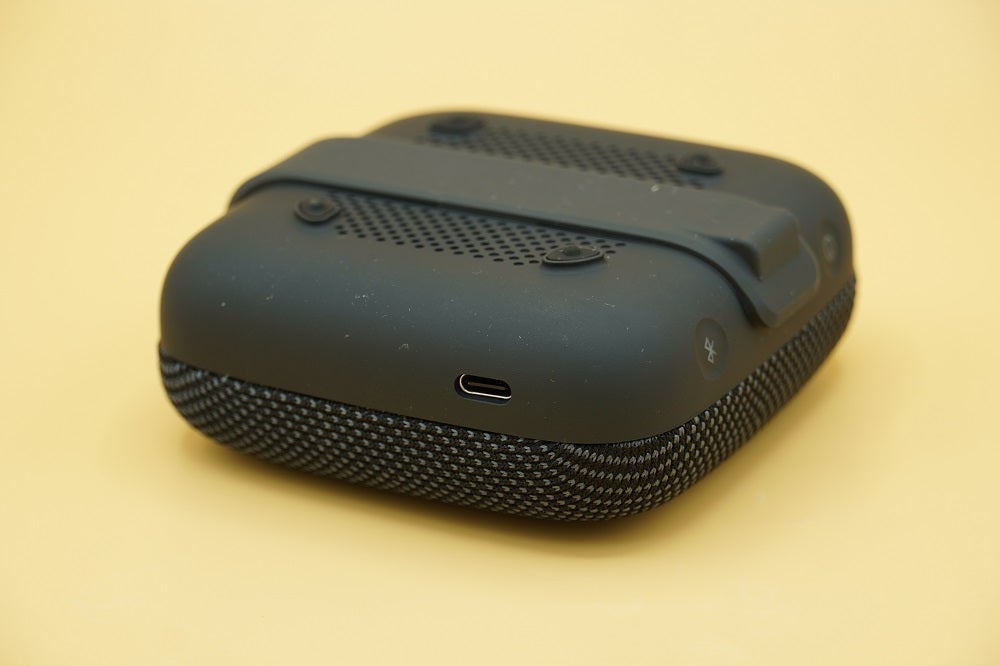 The clasp/strap on the underside of the Stormbox Micro

At 98.3 x 98.3 x 35.8mm, it’s small, though small enough to fit into a backpack rather than a slim jean trouser pocket. On the front face are the power and Bluetooth pairing buttons, with an LED indicator in the middle that covers both the status of the speaker and battery life. On the right-hand side of the speaker is the USB-C port for charging.

The Stormbox Micro is well-suited to cope with indoor and outdoor environments. A rating of IP67 means it’s insulated against dust and can be dropped in a body of water 1m deep for 30 minutes. You won’t be listening to music underwater much, but if you knock it over at least it’s protected.

Connectivity is Bluetooth 5.0 with what Tribit claims is a 100-ft range (30m), That seems rather generous (will you be listening to music from 30m away?) but handy. Battery life is up to 8 hours, which is below what’s become the industry-standard of 10-hours, though for a speaker of this size, 8 hours is commendable. Charging the battery to full takes 3.5 hours. 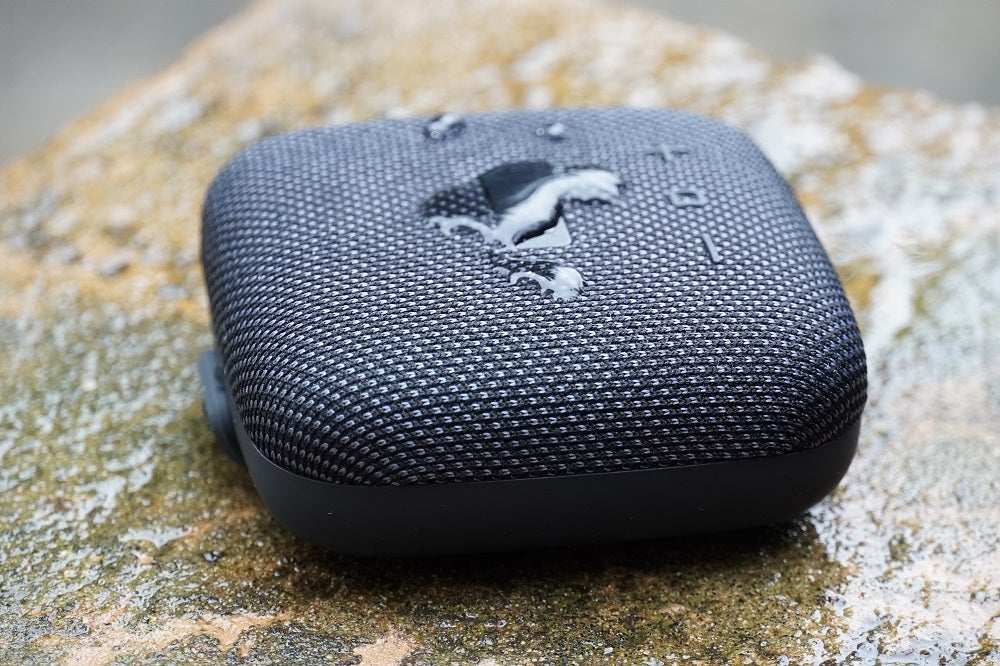 If you purchase a second Stormbox Micro, which is eminently doable considering the price, you can connect the two in Party Mode and Stereo Mode. Hold the Bluetooth button on both speakers for five seconds and they’ll enter Party Mode, which sees volume levels rocket up.

In Stereo Mode the speakers will split into left and right channels for stereo separation. Stereo Mode can only be done once the speakers are in Party Mode and to enter it requires a short press of the Bluetooth button on either speaker. When putting the Tribit into either Party or Stereo Mode, you’ll hear a voice confirming the decision. 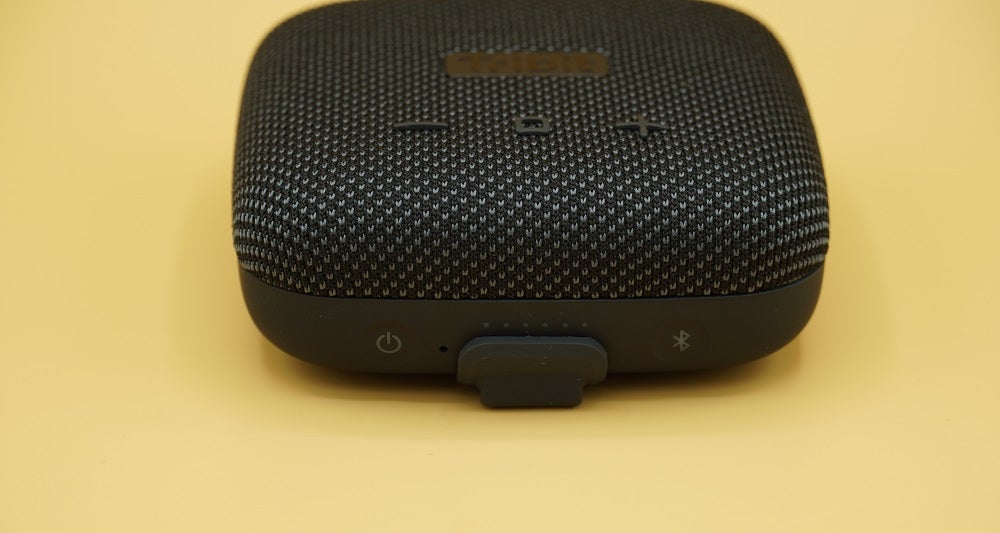 The Multifunctional button can be used in both Music and Conversation mode. A short press for play/pause, a double press skips forward, and a triple press goes back. A press and hold activates your mobile device’s voice assistant. Conversation Mode is for taking phone calls and you can answer, reject and switch between two phone calls.

Considering the Tribit Stormbox Micro costs £39.99, I wasn’t expecting a whole lot. But this speaker boasts an impressive audio performance that’s unexpected from a speaker at this price point.

There’s no trace of sibilance or harshness in music playback, and reproduction of high frequencies are well done. In fact, the Stormbox Micro offered a clear sound with whatever was piped through. You might have expected a warm or excitedly bass-happy performance from a speaker this cheap, but that couldn’t be further from the case. It’s an unexpectedly trimmed and disciplined performance. 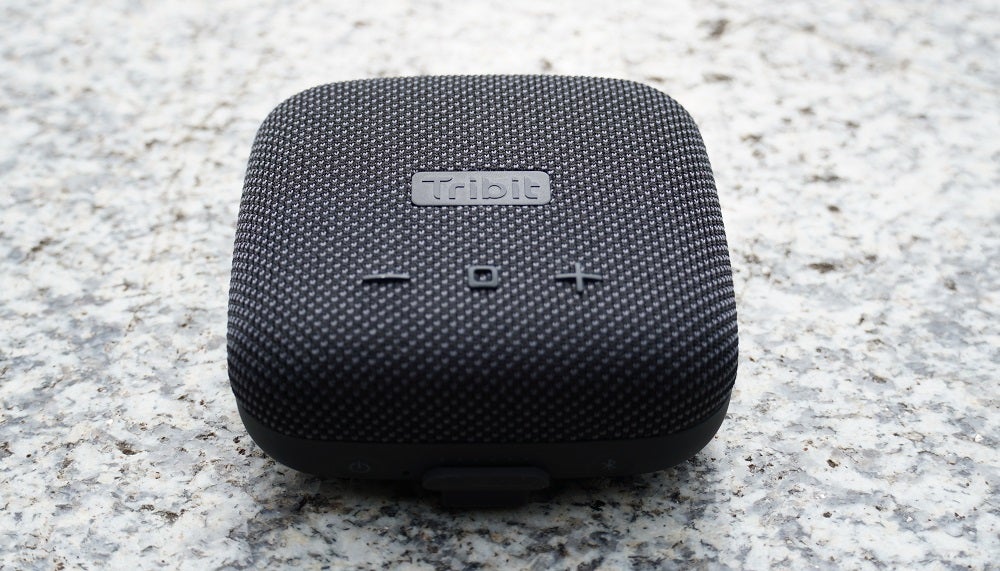 Its size means the soundstage it creates is not particularly broad, but Tribit makes smart decisions to avoid the speaker sounding cramped or cluttered. For instance, the speaker’s focus on projecting vocals ensures excellent clarity for lyrics, and avoids the issue of voices sounding muddied or squashed when sat alongside instrumentation in a track.

Bass is good, well-defined if not offering much in terms of depth. A listen to Pharcyde’s Runnin’ on Spotify and initially it’s not impactful but turn the volume up and it exhibits more of a presence. In fact, the Stormbox Micro can go surprisingly loud, though the UE Wonderboom 2 still bests its rivals when it comes to room-filling sound. 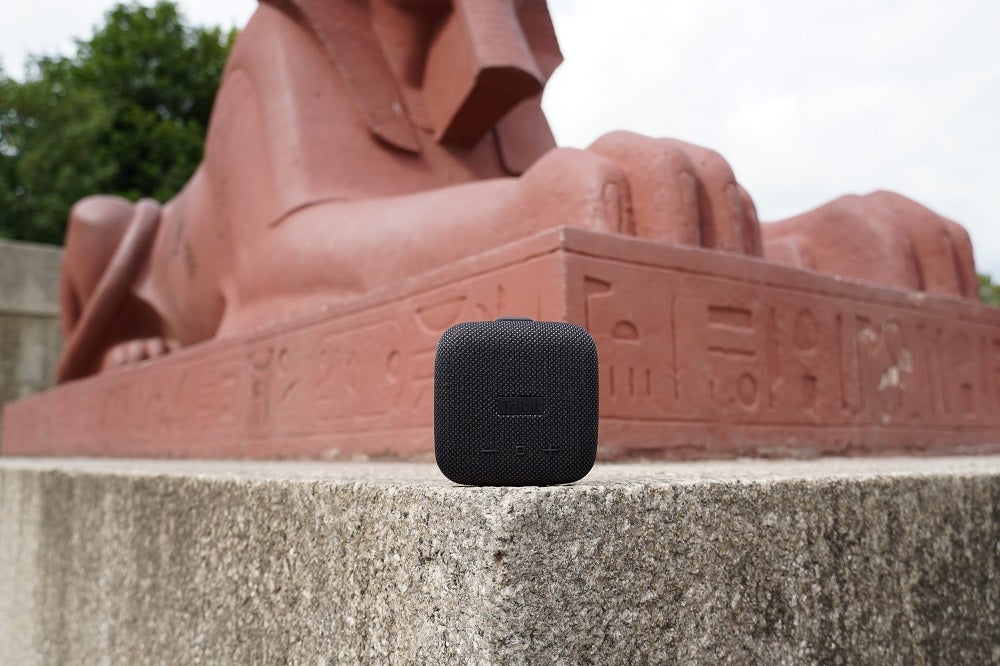 The performance is quite clean, detailed and distinct – in some cases it’s better than the Marshall Emberton, which is three times the price. Dynamically it’s decent, but don’t expect a particularly expressive performance in this regard. Do expect a sound that’s bigger than it’s small confines, retaining composure even when the volume is set to higher volumes.

It’s not got as much weight to its performance as the Emberton, nor does it have that speaker’s sense of energy. There’s also a tendency for playback to sound sparse and somewhat distant. This is likely down to the nature of the speaker’s build, which means audio is directed upwards rather than fired at the listener. These are nevertheless small knocks against what is a very impressive performance.

Should you buy the Tribit Stormbox Micro?

If you’re after a cheap portable wireless speaker, the Stormbox Micro offers great value for its price. It’s clear and detailed sound is impressive from such a small form factor, making it one of the best-sounding portable speakers below £100.

The obvious alternative is the Wonderboom 2, and in some respects it’s a closer match than expected. The fact that it’s so close is testament to the quality of what Tribit has achieved. They’ve made a very impressive and affordable portable wireless speaker in the Stormbox Micro without sacrificing quality.