Available on Xbox 360, Xbox One, PS3, PS4 (reviewed)
Here’s RedLynx’s problem: the closer you get to perfection, the harder it is to improve. If it wasn’t enough that Trials Evolution was so near to the mark, it also doesn’t help that the core of Trials’ appeal is its simplicity: one rider, one bike, a single-plane course of ramps and jumps, and one of the most streamlined control systems imaginable.

Where some games can be enhanced by adding features or just adding more realistic graphics, Trials isn’t really that kind of experience. You can’t improve Trials just by adding more stuff; you have to find a way to make it feel even better. 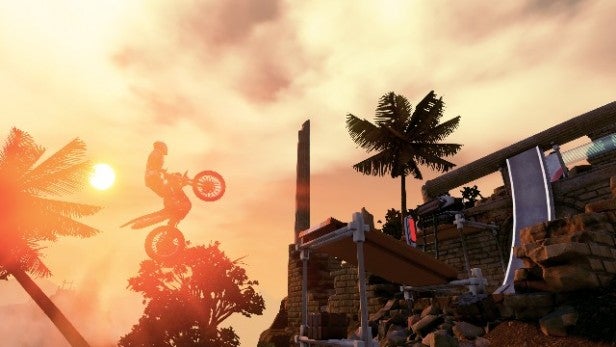 At its best, Trials Fusion does just that. This is a better looking game than Trials Evolution, with unbelievably crisp full HD graphics on PS4, and spectacular courses that have you racing up Peruvian waterfalls or jumping through a sandstorm, but this is no-one’s idea of a system showcase.

For all its gorgeous lighting and cinematic camera angles, it just doesn’t have the scope to show that kind of detail. Instead, RedLynx seems to have focused its attention on making Trials even more accessible to mainstream gamers, but even more satisfying for hardcore fans. The secret, it turns out, is layers.

On the one hand, we get more tutorials on the basics of acceleration, braking and leaning forwards and backwards to balance and control your bike. We also get a single-player mode, with themed tiers of tracks of escalating difficulty, that isn’t particularly difficult – at least at first – to work through.

Access to each tier is controlled by medals, with one for a bronze completion, two for silver and three for gold, and while a bronze is good enough to push you on to the next track, you really need to start bringing in the silvers and golds if you want to bank enough medals to reach the later tiers. 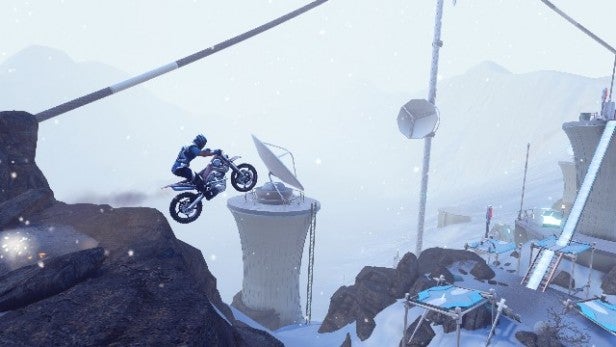 Each track is quite generously packed with checkpoints, and when you crash – and you will – a single tap of a button will reset your try at the last one. However, crash and rest too many times, and you’ll lose that silver medal, while you need a clean run to get a gold.

Luckily, you can always instantly restart the whole she-bang if you’re pushing for that goal, and you can also go back and mine earlier tracks for an improved result if you need a few more golds. Whenever you bag a bronze or silver, there’s always that feeling that with a slightly better run, and just one less mistake, you could really have that track licked. This, and the need to bag more medals, keeps you coming back again and again for more.

That’s the casual crowd sorted, but on top of this we get additional layers for expert players. First, we get challenges. Each track has three, which might range from finishing a clean run without leaning forwards or backwards to finding a hidden button in the track. You might need to flip so many times during a successful run, or you might need to avoid a certain set of markings.

These challenges are tough, but that toughness does something special: it turns tracks that experienced players would find insulting into something worthy of their time. 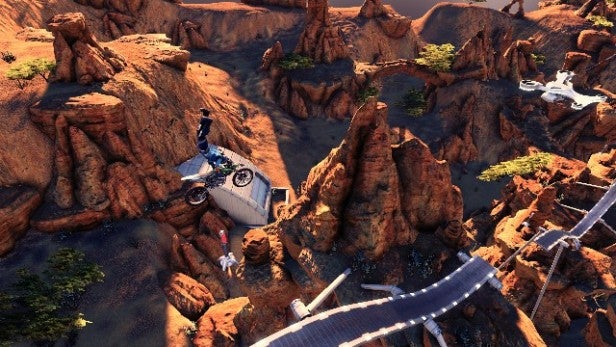 What’s more, make a little more progress through the game and you’ll encounter the all-new stunt system. Now the previously unused right stick takes your rider off the bike and through a series of poses, grabbing onto the handlebars or saddle, or leaping up to stand on top of the bike.

This trick system takes centre stage in the new FMX tracks, which ask you to get the highest trick score in the available time, but they can also be used to boost your score – and your leaderboard placement – on the regular Trials tracks. Trials aficionados have just been given a whole new way to show off.

The tricks system isn’t a complete success.  Where Trials’ controls are incredibly intuitive, pulling off tricks is anything but – at least at first. However, it might just be something that takes getting used to. Just as you can struggle with a course for half an hour, then come back later and wonder what all the fuss was about, tricks might slot into place and muscle memory with time. 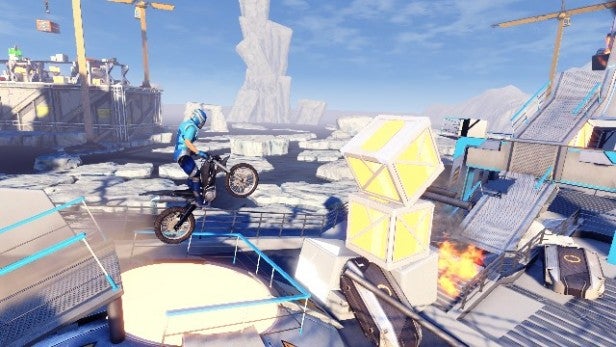 The layers continue. You’ll earn points and track up, unlocking new bikes, parts and rider gear.  Eventually you’ll unlock Extreme tracks – tracks that take you right back to the days of old-school Trials, where success was less about the flow of tiny adjustments to balance and speed, and more about trial and error puzzling through the track.

When you’re really good there are always the leaderboards, where you can try to stamp your mark on every track. Multiplayer is rather disappointingly limited to two to four-player local action, with online tournaments to come. Still, it’s all these these layers that will give Trials Fusion its longevity in months to come.

In other respects, Trials Fusion doesn’t feel like a vast departure from Evolution. There’s one brilliant new bike – a 4WD ATV kind of thing – and the Skills Game tracks, where you focus on one weird or unusual objective, seem more part and parcel of the game.

The most fundamental change is a change of setting, from a modern world of motorbike grunge into a slick futuristic experimentation conceit clearly influenced by Tron aesthetics and the look, feel and narrative of Portal 2.

This isn’t particularly coherent, and it also causes one of the biggest annoyances in game: repetitive commentary that kicks in every time you hit restart. While we’re moaning, did publisher Ubisoft’s typically obtrusive UPlay integration really need to be shoehorned in? 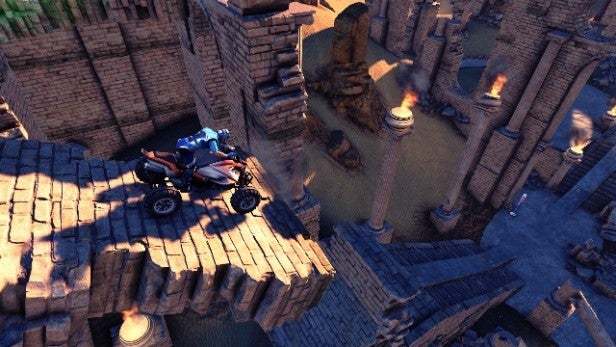 The only other shift is a bigger emphasis on DIY, smacking a little of Ubisoft’s experience with Nadeo and Trackmania. You can still put together your own tracks using a simple and elegant track editor, and these can be shared through a central resource – Track Central – which comes with its own persistent tracks and leaderboards.

Tracks are organised not just by player ratings, but by difficulty, track and recommended playlists, and while the tracks online right now aren’t frequently brilliant, there’s definite potential. RedLynx itself has committed to more DLC, so Trials Fusion has plenty of petrol left in the tank.

Verdict
Trials Evolution was a great game and the same can be said for Fusion, even if it struggles to make meaningful advances. The worst thing you can say about it is that it’s a refinement of a game that was pretty refined already, and that a few of the new elements seem unnecessary, almost working counter to the purity of Trials. Still, if it’s a matter of opinion whether this is the best Trials yet, it almost doesn’t matter. It might not be any closer to perfection, but what’s here is more than good enough.