If you’re serious about headphone audio, and serious about using a PC or PMP as your source, then a separate headphone amplifier should only be second to a decent set of cans on your shopping list. It’s not that you can’t get a great sound direct from an MP3 player or sound card – with a decent sound card or one of the better players from Cowon, Samsung or Sony you definitely can.


It’s more that, with a headphone amplifier handling the output you can expect a richer sound, a stronger presence, a clearer soundstage and enough power to drive even the most discriminating over-the-ear ‘phones. You might think your Grados sound great straight from the output of your notebook, but until you’ve heard them through a dedicated amp, you haven’t really heard them sing. 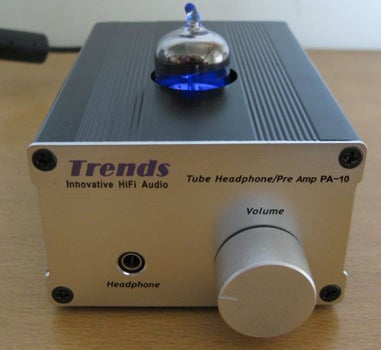 Unfortunately, headphone amplifiers tend to be expensive and – like any slightly niche device – prohibitively so. Luckily, there are some good value propositions. A few weeks ago we looked at the iBasso D2, a cool, portable headphone amp/USB DAC which could take music to a new dimension without costing the earth.


Today we’re looking at the Trends PA-10, a desktop headphone amplifier from Hong Kong which is already making waves in the PC audiophile community, and deservedly so. Final UK pricing has yet to be announced, but you can pick up a PA-10m for around $225, which works out at approximately 128 of our currently weak and wussy British pounds.


This might not sound much of a bargain, but the thing about the PA-10 is that it’s a hybrid tube headphone amplifier. These normally sell for anywhere upwards of £300, so £128 is really pretty cheap.

The PA-10 is designed to be used solo as a headphone amp, or as a compact pre-amp to be used in combination with Trend’s TA-10 power amp and the speakers of your choice to make a neat, inexpensive micro system. The design is fairly simple, with a nice solid aluminium case featuring a 3.5mm headphone socket and volume knob at the front, plus two stereo phono inputs, a set of stereo phono outputs and an input selector switch at the back. To keep size and costs down the power supply is an external wall-wart, and there are no gold plated sockets or anything fancy like that.


The tube used in the pre-amp stage is a Chinese-made 6N11, but the amplifier will work with several alternatives, and it’s possible to buy an SE version with a Russian 6H23n for a ‘thicker, warmer bass’. The tube actually protrudes from the top of the case, enabling you to enjoy its lovely, rosy glow when you have the lights off. Note that if you do want to replace the tube with something different, you may have to fiddle with potentiometers inside the box to recalibrate the amplifier. That’s not a problem if you’re a dedicated tinkerer – and many of us at TR are just that – but it might be if you prefer things to just work. 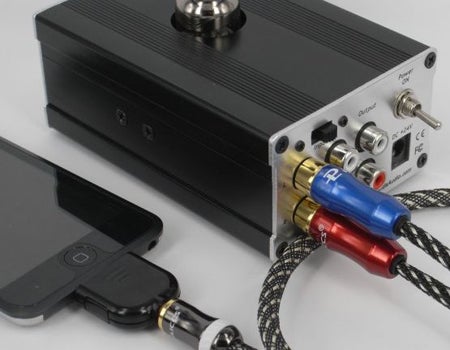 If I’d have any complaints about the general design and build quality, they would be these. First, it’s a little too easy to knock the tube out of place accidentally, which probably isn’t good for its life expectancy. Second, the case gets really, seriously hot in use, which might be good if you want something to warm your coffee cup, but not if you just want to leave the PA-10 sitting on your desk.


Finally, you’ll inevitably need a 3.5mm to dual phono cable or an adaptor to use it with your PC, your MP3 player or an iPod line-out dock. Fitting a 3.5mm input wouldn’t have added much expense, and would have made this unnecessary. Still, at least you get two sets of input to switch between. Some people have also complained about a noisy volume control, but I can’t say it’s been a problem for me.

To create its output, the PA-10 uses a combination of tube pre-amplification and solid-state, MOSFET power amplification. The idea is, as always with hybrid amplification, for the tubes to provide rich, warm tone while the MOSFETs concentrate on turning that into a strong, clean signal. The approach doesn’t work every single time, but when it does you usually get a great result.


And so is the case here. The sound the PA-10 puts out is perfectly lovable, with a warm, creamy tone, a strong bass response and a clear top-end. At first it’s actually a bit brash when it comes to treble; not enough to create a wearying noise, but enough to make the sound a little too bright for some tastes.


However, after a few hours that treble starts to round off nicely, and the PA-10 is just pure pleasure to listen to, putting in a strong performance with dance, electronica, classical , indie, folk and even country but especially – and maybe this is the tubes – old-school, classic rock. 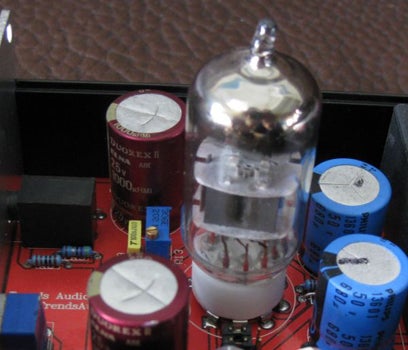 I tried it out with four sets of headphones: the Grado SR125is, Sennheiser’s HD595s, a pair of BeyerDynamic DT770 Pros and my cheap and cheerful AKG K141 Mark IIs. The results with all sets was fantastic, but especially so with the HD595s, where the added warmth and low-end richness compensated for what few weaknesses there are in the Sennheiser’s controlled, well-balanced sound.


The PA-10 gets scarily loud before you even hit half volume, so there’s no problem driving the high impedance DT770 Pros, and my only worry was that, with bass-heavy tracks like Ladyhawke’s From Dusk ‘til Dawn, the bass was actually a bit too pronounced and boomy, to the detriment of the rest of the mix.


With the Sennheisers or the Grados hooked up, however, and some tasty tracks emanating from my iPod using a line-out dock, there were plenty of treats to be had. The PA-10 does great things with intimate, acoustic music, and tracks from k.d. Lang and Alison Krauss revealed gorgeous, rich vocals and a mass of instrumental detail.

The PA-10 is slightly less at home with the harder edges of electronic music, but Natasha Khan’s vocals and piano in Bat for Lashes’ Moon for Moon sounded incredible. There’s also enough detail, definition and control for classical, as spins through Vaughan Williams’ The Lark Ascending and Arvo Part’s Summa for Strings confirmed. Most of all, though, the PA-10 is a rock monster. Deep, from Brendan O’Brian’s revitalising new mix of Pearl Jam’s Ten sounds huge and ferocious, with its huge Wah-Wah heavy riffs, rolling fills and bellowed vocals. The bass line in Smashing Pumpkin’s Ava Adore just sounds epic.


I couldn’t resist A/B comparisons with the iBasso D2, even if the two products address slightly different needs. Feeding FLAC files from PC using a Soundblaster X-Fi PCI card for the PA-10 and the USB DAC on the iBasso, it’s clear that the PA-10 wins out on tone and sheer, raunchy power, but the iBasso offers a tighter bass, a cleaner mid-range and a more balanced sound overall. 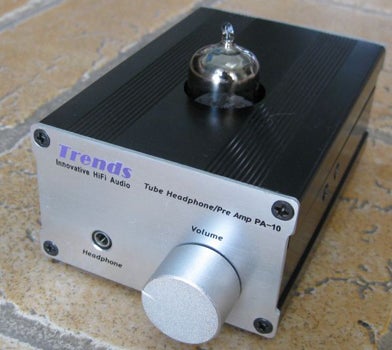 Listening to Talk Talk’s Eden and The Kings of Leon’s Notion, both amps excel, but the iBasso reveals that bit more detail. If I had to choose one over the other, I really don’t know which way I’d go. The D2 is the more versatile product, even if it is more expensive. All the same, it’s hard to resist the PA-10’s old-school charms.


If all you want is a desktop headphone amp, however, then the price/performance ratio on the PA-10 is hard to beat. You really need an iPod with a line-out dock or a PC with a decent internal or external sound card to get the best out of it, not to mention a decent set of headphones, but if those things are in place you’ll get an awful lot of enjoyment out. It’s not perfect, and there are signs of the budget showing through, but it’s a deeply lovable bit of bargain-chasing audiophile kit.


Under £150 for a tube-based headphone amp is peanuts, but the Trends PA-10 is no monkey. If you want a good desktop headphone amp it’s something of a steal.