Amazon doesn’t make getting by easy for its ebook reader competitors. Not only are Kindles pretty great, they’re priced very aggressively too. Only a few rivals manage to creep in under the asking price of the non-touch Kindle, and the TrekStor Pyrus is one of them. You lose a bit in the process, but it’s a cut above budget LCD screen ereaders if you’re after a paperback-replacer. 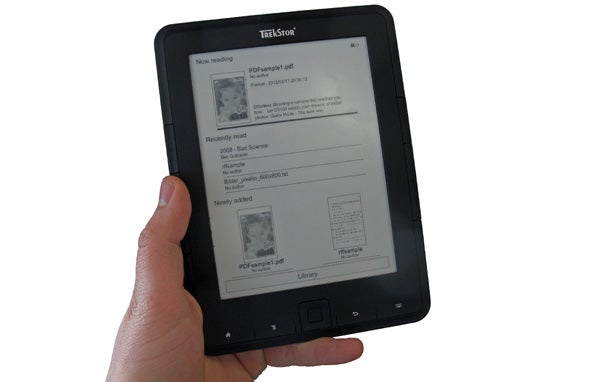 Design
The split-second first impression the TrekStor Pyrus leaves is not a great one. It’s not a pretty device, lacking the conspicuous sense of design that the Kobo eReader Touch and Kindle offer. The worst contributors to this lacking design are the nav buttons at the bottom, and the D-pad that sits in the middle of them. There’s more than a hint of stereotypical soviet function over form going on here, and that the buttons are naff-feeling flaps cut out of the front panel doesn’t help.

Once you get over the lacklustre looks and wrap a paw around the Pyrus ereader, things improve. The ereader has a soft touch rubberised back that feels great under the fingers, and the page turn buttons are excellent, falling perfectly under a thumb in a manner similar to the non-touchscreen Kindles.

The page turn buttons sit right on the edge of the TrekStor, and with a concave groove they beg you to rest your finger them – and these dual page buttons are replicated on each side for left and right-handers. 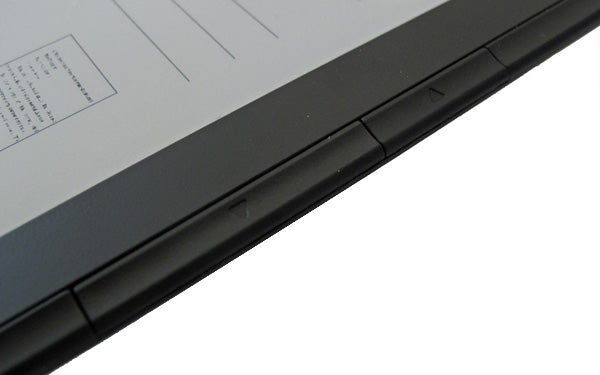 However, while the ereader fits comfortably in-hand, it is significantly heavier than most. At 213g, it’s a good 30-40g weightier than the Kindle and Kobo eReader Touch, while packing-in less advanced tech. 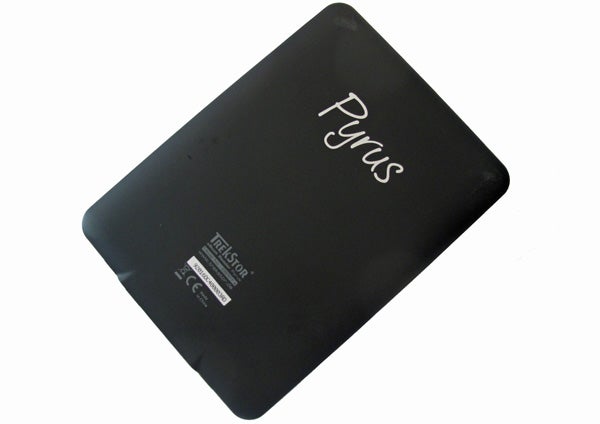 The weight here makes the Pyrus feel more like the Kindle Touch, which weighs-in at a portly 220g. Of course, while the difference may be substantial, you can easily hold any of these ereaders one-handed – it just isn’t feather-light. We’ll have to assume this is down to the bodywork rather than the battery – TrekStor claims it’ll last one week, which is fairly average for an E-ink ereader (although obviously fabulous compared with an LCD ereader.)

Connectivity and Support
All the TrekStor Pyrus’s connections are held on its bottom – a microSD slot, microUSB for charging and transferring books, and the power button. All we’re missing is a 3.5mm headphone jack – which rules-out listening to audiobooks or music. Some budget ereaders offer one, but let’s not forget the cheapest Kindle does not.

One of the most significant connectivity omissions is one that you can’t see – the TrekStor Pyrus does not have Wi-Fi. In most ereaders this is used to access a built-in book store. Here, there is no web browser, no book store and no email client. The “Get more eBooks” option in the menu just takes you to a PDF help file that tells you how to sync with the TrekStor eReader Suite software.

Alternatively, you can simply plug the Pyrus into a computer and drag ebooks onto its 4GB of internal memory. File support is decent, with standards like EPUB, MOBI, PDB, RTF PDF and TXT all on-board. It makes for a poor PDF viewer, though – a lack of zoom options making it useless for any pages much larger than the ereader’s own screen.

The TrekStor Pyrus has a 6in 600×800 E-ink screen that’s very similar to that of all the big-name ereaders. It offers the often-quoted “strain-free” read that you won’t get with a backlit screen of something like an iPad.

Image quality is good, but text often seems a little less sharp, and contrast a tiny bit less, than the top performers – which could be down to the generation of panel used or the software powering the ereader. Nevertheless, a solid reading experience is on offer here. 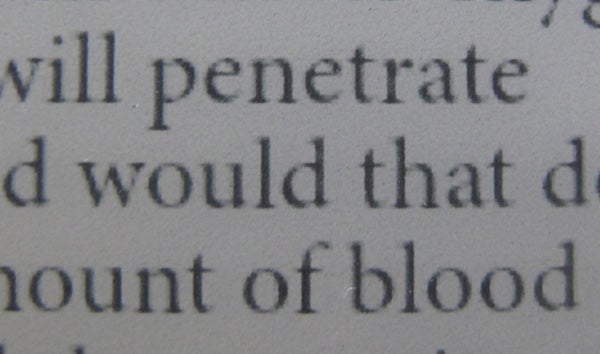 You will need to enable page refreshes at every turn for the best results, though – a page refresh is where the screen flashes black momentarily, effectively resetting the microcapsules that make up an E-ink display. The Pyrus offers options to refresh ever three or five pages, but the ereader intermittently suffers from some of the worst on-screen residue we’ve seen in an E-ink reader – although oddly it seems to depend on the type of file being viewed.

Single-page refreshing is no great hardship, though, as page turns are reasonably quick for a budget ereader.

Interface and Ease of Use
The TrekStor Pyrus has a pretty stripped-back and simple interface, and as there’s no touchscreen, most menu navigation is handled using the D-pad. Functionally, the software running the show is laid-out much like the Kobo eReader Touch‘s, with a home screen that shows the book you’re reading, recent reads and any that have been added. However, there’s none of the gloss seen in the Kobo. Like the body, it flat-out doesn’t look impressive. 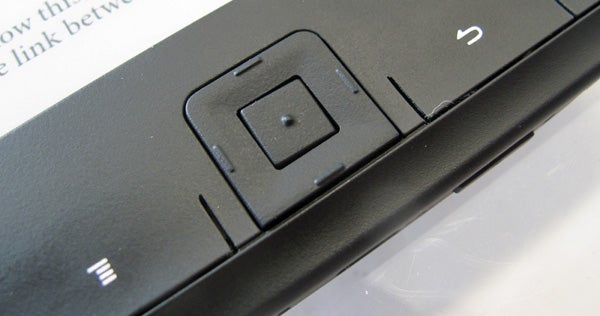 The main menu is a little better, using icons to represent the ereader’s core features, and the simple library section is pleasantly pragmatic, showing titles and file types rather than getting ambitious with book cover images. Faced with a “budget” ereader, we were dreading the prospect of a slow, cumbersome experience. There is the standard E-ink lag, but performance is perfectly fine – aside from slow rendering of PDFs. 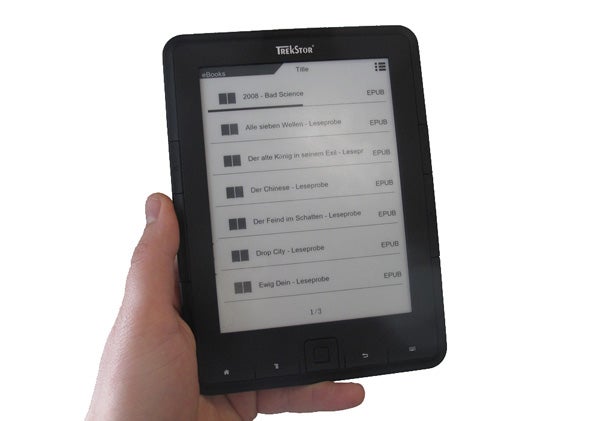 Control over the look of pages is limited. There are six font sizes – some offer many more – but no control over font style. The Pyrus also lacks an internal accelerometer, used in some ereaders to automatically re-orientate the page depending on how the device is held. However, you can manually rotate the screen, 90 degrees at a time. Other extra features include bookmarks and a search function, although favourites like a dictionary are, sadly, absent. This ereader really is frill-free. 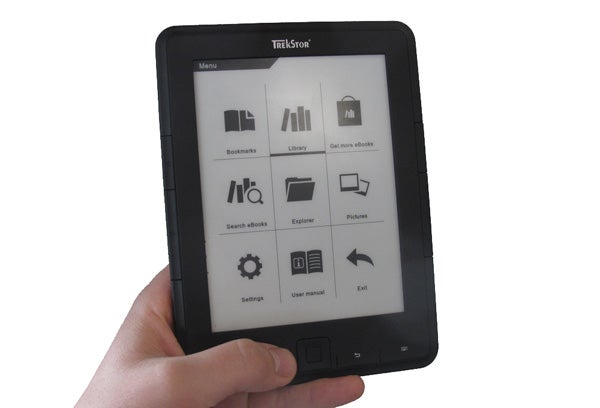 Value
The TrekStor Pyrus cuts out all the flash bits of ereaders – the snazzy design, the wireless connectivity, the internal speakers and headphone jack – to offer a reader with a good screen at a very low price. And it fares pretty well as a basic ereader as long as you stick to EPUBs rather than PDFs. However, now what the touchscreen, and altogether nicer, Kobo eReader Touch is available for as little as a fiver more, the Pyrus’s price hasn’t plummeted quite far enough to compete in the UK.

With a solid E-ink screen and great page turn buttons, the TrekStore Pyrus offers a decent basic reading experience that we’d recommend over a low-cost LCD-screen ereader any day. However, when other more feature-packed, better-looking ereaders can be had for just ten pounds more, there are better deals out there, unless you find the Pyrus being sold at a discount.