‘Multimedia’ has gone from being no more than a buzz-word with the mainstream introduction of optical media in the 90s, to being an integral part of most people’s ‘digital lifestyle’. Most devices these days are either dedicated to entertainment, or have some form entertainment functionality built-in. You can play video from almost anything, be it your mobile phone, MP3-player, notebook or netbook.


But there are still devices on the market that do not have the ability to play video or music content built-in, like LCD monitors and most televisions. This is where units like the imaginatively-named Traxdata MultiMedia Drive we’re looking at today come in. What these multimedia drives enable you to do is play various forms of multimedia on your TV or monitor without needing a computer. However, they are in an arguably awkward position in the market, as I’ll explain below.


While Multimedia drives offer more video connectivity than most notebooks, they are far less flexible in the formats they support. Basically, the ones the drive comes with when you purchase it are the ones you’ll be stuck with for its lifespan – unless the manufacturer has made the unit firmware upgradeable. The scenario in which this is most problematic is if a new format or container comes onto the market and rapidly gains widespread support, like the relatively recent rise of MKV (which to my knowledge no current multimedia drive supports). 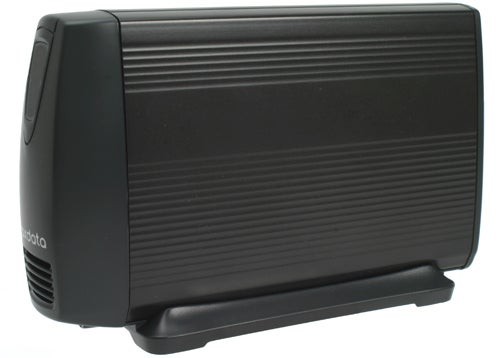 Also, you will already need to own a PC (or know a kind person who does) in order to transfer digital media onto the Traxdata drive. Now the argument might crop up that you’re then better off just hooking your PC up to your television in the first place. To counter this, the Traxdata (unlike many cheap laptops) offers digital connectivity, uses less electricity and almost definitely gives you more storage. But considering all the limitations, this is the crux of the issue, really: for most buyers, a device like this should not be significantly more expensive than an external hard-drive without these features, but it is.


For now though, let’s get to the product at hand. Taking the MultiMediaDrive out of its packaging reveals its reassuring weight, which is due to the use of metal in large parts of its chassis (only the front, back, a small strip at the top and the vertical stand are constructed of plastic). This contributes to both a stronger case, and one that remains nicely cool after long periods of use.


You can also forget about placing this unit horizontally, as the stand is permanently attached, and removing it will void your warranty. The idea that this drive is meant to be placed upright is enforced by the unit bulging out towards the bottom – a bit like a pear.

The metal sides are grooved and glossy black, while the plastic is the same colour in matte. Overall the effect is not particularly attractive, especially compared to a few of the rival models out there – but it’s not particularly ugly either. The only touch that looks truly cheap is the little plastic screen hiding two indicator LEDs – it looks more like a sticker rather than a functional part of its design. These two LEDs consist of a blue one to indicate power and HDD activity, and an orange one to indicate remote standby on/off.


The best and worst that can be said about the Traxdata in terms of design is ‘unobtrusive’. This is aided by a complete lack of buttons on the unit’s front. This is because you can’t control ”any” of the drive’s functions from the unit itself. Frankly, this is not only rare for this kind of device, but also extremely annoying: if you lose or temporarily misplace your remote, basically all you’re left with is a 500GB external USB hard-drive (which can be had for a third of the price). 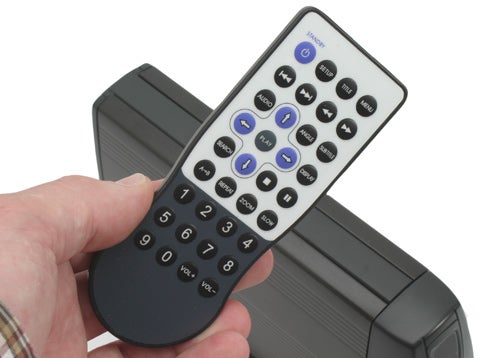 Speaking of the remote, it’s one of those ultra-slim ones, which I dislike because you can’t get rechargeable batteries in a ‘watch-battery’ format. But in this case there’s actually a practical reason, since the remote ingeniously snaps into the bottom of the Traxdata’s stand. This is very convenient for transport, or for just stowing the remote away when you’re not using the device.


Ergonomically, the remote is quite comfortable to hold due to its relatively large size and curved shape, but it’s not as nice to use. Apart from a little colour-coding, all the buttons are the same size and equally spaced apart, and since they don’t glow-in-the-dark, you’re likely to hit the wrong button when the lights are out. Play is a separate button to pause (when it would have made life a lot easier were it the same one), and worst of all – contravening pretty much every other remote out there – volume-up is on the left and volume-down on the right.


Things look up when it comes to connectivity though, as the Traxdata’s back is stuffed with connections. The highlight is HDMI, which is becoming quite common on multimedia drives, but not yet a given. There’s coaxial for excellent-quality digital sound. A proprietary single-mini-jack form of component is joined by a similar connector type for composite, as well as the ever persistent SCART socket (which makes it very versatile for use with older sets and CRT TVs), and naturally there’s USB 2.0 for PC connectivity. Cabling is provided for the aforementioned ‘unusual’ component and composite audio/video too.

At the back you’ll find a small power button that’s easy to locate thanks to its six Braille-like protrusions. However, what you won’t find is a headphone socket for use with a monitor, though you could get a stereo-phone to 3.5mm adapter. Finally there’s USB and the 12V power brick and cables. The supply can switch between 100-240V and the device supports both PAL and NTSC, so that you can use the Traxdata all over the world.


Though a driver is included for older Windows versions, users running Vista or XP don’t have to install it, making installation a breeze. Just make sure to install both included applications before hooking up the drive, otherwise they won’t work. These two pieces of software consist of the Playlist Manager and Private Folder Manager, and are well-explained in the supplied digital manual. 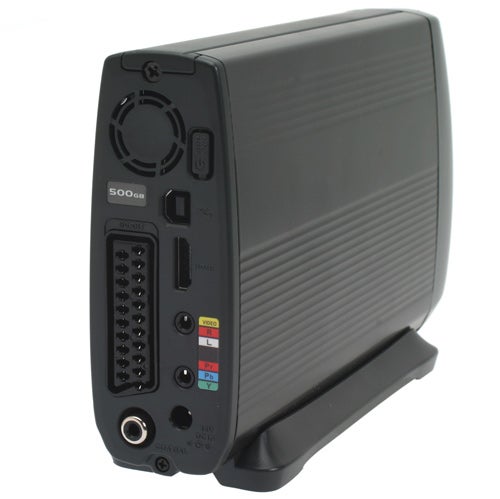 The Playlist Manager is not exactly rocket science, and while it isn’t particularly powerful or flexible, it does what it says on the tin (or CD, in this case). It allows you to add music, photographs and video files to one or more playlists (up to 2048 files per list), and decide their order and how often they are to be played. Like Windows, it lets you sort media files by name, date, type and size, but it also adds Tags to the mix, which does make things easier. Pity it only works on the Traxdata – it simply didn’t recognise other drives. 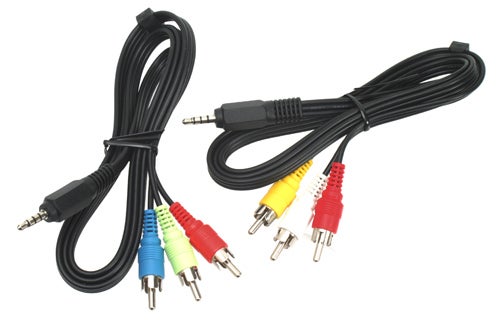 Private Folder Manager is arguably more useful. It lets you mark certain folders on the Traxdata or any other drive as private, which after inputting a four-digit pin of your choosing become invisible to anyone browsing the Media Drive either on the PC or in its ‘multimedia mode’ using a monitor or TV. Now what kind of files would anyone put under password protection on a multimedia station, I wonder?


In use the Traxdata performed pretty much as expected. Once you’ve filled the device with media content of your choosing, you have to disconnect it from your PC before it will go into what I refer to as ‘multimedia mode’ (basically the mode that allows you to play back your content on your display). We can’t think of a good reason why it should do this, though to be fair it’s not something that will bother the average person. A few other hiccups include all aspect adjustments being found under ‘component out’ – even when connected solely through HDMI! – and being forced to go to the ‘home’ screen before it’ll let you access the adjustment menu.

Once connected only to the display(s), you need the remote to activate multimedia mode. After a loading screen reminiscent of the XP one, you get an interface that’s remarkably similar to Media Center – and why not? Aforementioned quibbles with the remote and interface aside, everything works well enough. Transitions between various different types of media are smooth, and the MultiMedia drive offers a thumbnail preview mode for photographs.


Dolby Digital works as long as your media supports it. The upscaling is nothing special, but then that’s hardly unexpected on a device at this price range. We tried running it in 1080i with only the drive’s scaling active, and got only a watchable result. Any artefacts in the original source were exacerbated and there wasn’t much (read:any) positive processing going on, but quality remained acceptable. However, this also highlighted the Traxdata’s potentially biggest problem: a complete lack of support for any high definition format. 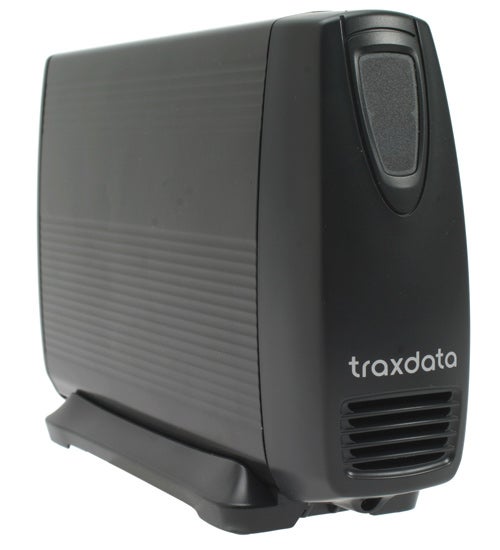 In fact, even compared to the competition format support is a bit thin on the ground. For movies there is only MPEG1/2, AVI or SD DivX, with no sign of MPEG4 which most HDMI-equipped multimedia drives support. Apart from this you get DAT, MPG, MPE, VOB, JPG, JPEG, MP3 and WAV. You can also easily transfer DVDs in their entirety through the simple process of copying the ‘video’ folder directly off the optical disc. The Traxdata will still let you use the DVD’s menus and features, and ‘upscale’ it to match your TV’s 720 or 1080 resolution.


To be honest, I would have some difficulty wholeheartedly recommending multimedia drives in general until they offer support for high definition formats. As it stands, the Traxdata’s MSRP of £150 needs to drop by around a third to be truly competitive, and even then it’s undercut by some of the competition in terms of features and flexibility.


The Traxdata MultiMedia Drive simply does not offer enough to distinguish itself over similar products by LaCie and Iomega, who offer more compelling products for less. If the drive actually goes on sale at just under £100 though, it might be a worthy alternative to what’s already out there.