You used to know where you were with big summer movie licenses. In a word, they were rubbish. The developers took the basic characters and plotline of the film and simply applied them to a basic genre template. You got a scrappy scrolling beat-em-up, a poor 3D platformer or a rotten 3D shooter featuring a poor facsimile of the star and everyone knew what to expect. 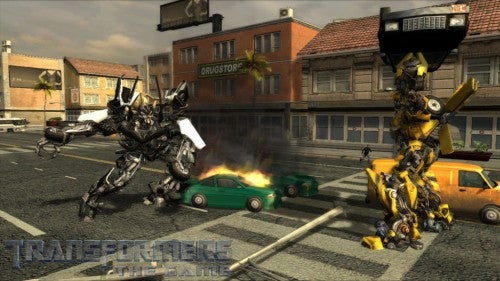 In this generation, however, the developers have started showing worrying signs of ambition. Occasionally, this pays off, as in Michael Ancel’s under-rated adaptation of King Kong. Most of the time, however, it’s a tale of hope followed rapidly by disappointment. Take EA’s most recent Harry Potter for example. For one minute, you think you’re going to get a brilliant free-roaming adventure set in a superbly detailed, authentic virtual Hogwarts. Then it slowly dawns on you that the tasks you’re being asked to complete are more tedious and unimaginative than you would ever have thought possible. It’s a similar story with this summer’s Pirates of the Caribbean: At World’s End. First you’re drawn in by the luminous graphics and the brilliant digital facsimiles of Johnny Depp et al, then you start hoping that it might build on the Tomb Raider style platforming and not the useless objective-based adventure stuff. Sadly, before long reality dawns and you realise that this isn’t going to happen.


Well, prepare for more of the same with Transformers.


Here’s the good stuff. The modelling and animation of the various ‘robots in disguise’ is exceptional. The way the camera barrels up and down as it follows behind them, a bit like the great shakey-cam in Gears of War, gives them a real sense of weight and power. Watching Bumblebee turn into a yellow sports car or Optimus Prime transform into a truck may be enough for the most nostalgic lovers of the old cartoon to justify the buying price. At times, the action is spectacular. Watching giant robots pick up and throw buses at each other or shove each other through buildings never gets old. The scale of the destruction is, at times, impressive, and when you add the surging score and the incredibly noisy crash-and-bang sound effects, it’s a pretty good recipe for audio-visual overload. 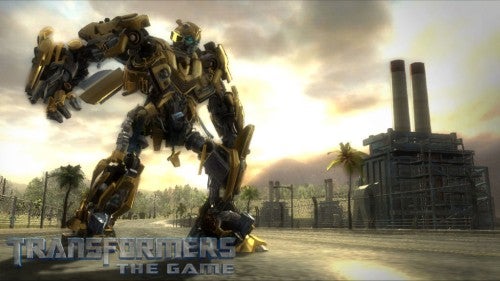 Want more? Well, the game offers two single-player campaigns, one good – the Autobots – and one evil: the Decepticons. Within these campaigns you get to play as a lot of classic Transformers heroes and villains, albeit in their updated, Michael Bay movie forms. That means you can look forward to stepping into the shoes of Bumblebee (now a Chevy Camaro rather than a Beetle), Optimus Prime (truck), Jazz (Pontiac) and Ironhide (Pickup) on the Autobot side, and Blackout (Helicopter), Barricade (Police car), Starscream (Fighter Jet) and Megatron for the Decepticons. As a bonus, it’s possible to unlock some of these characters in their original ‘generation one’ Transformers forms. 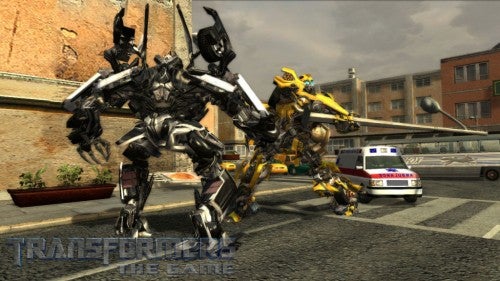 OK, so during the first half-hour of play, things are looking good. The initial Autobot missions are set in the centre and suburbs of an unnamed West-coast city, and while the environments aren’t as lovingly detailed as the robots, there are some nice, detailed textures and the HDR lighting is excellent. You can drive, jump and climb just about wherever you want, and the game looks like its promising a free-roaming action style, reminiscent of Hulk: Ultimate Destruction or Crackdown. Main campaign missions appear one-by-one as spots on the map, while additional challenge missions can be unlocked by collecting the energy blocks strewn throughout each area. Really, what could go wrong?


Well, plenty. It turns out that the stages aren’t that free-roaming at all. The challenge missions are uninventive and shallow; the typical stuff of ‘crush this many enemy robots in this many seconds’, or ‘drive from checkpoint to checkpoint as rapidly as possible’. The streets, meanwhile, give you little to do bar destroy buildings or fend off mosquito-sized attacks from the neighbourhood military or constabulary. You could spend time collecting the energy blocks, but neither their placement nor the city architecture makes this as engaging a pursuit as the various upgrade hunts were in Crackdown. As a result, you’re left simply driving from one main mission to another in linear fashion, and the free-roaming map is little more than a glorified mission select screen. 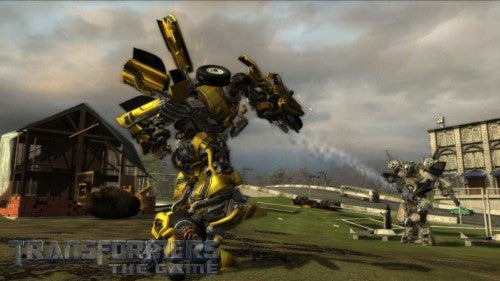 This in itself wouldn’t be so bad if the missions themselves were any cop, but they’re woefully lacking in ideas and energy. Go from location to location beating up any enemy robot that arrives. Go from place to place destroying specific buildings or objects at each location. Follow one enemy robot and kick his metallic at several points along the trail. There are some subtle variations on these themes, but mostly this is all the game has to offer.

To make things worse, the game’s difficulty level is all over the place, and for all the wrong reasons. It’s actually quite hard to die from health loss; there’s usually a power-ups knocking around within easy range, while others can be gathered from felled enemies, either human vehicles or robot. No, the problem here is time restrictions. Most missions require you to get to the next action area within a time limit or you fail, and some ask you to complete your objectives within a set period. 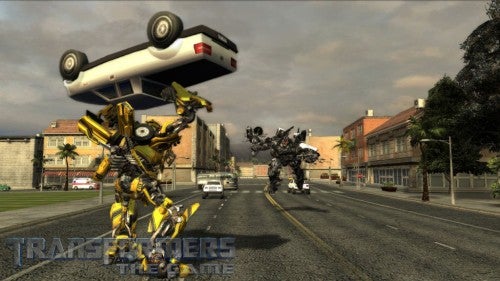 Sometimes this is fine, but get caught up in an ad-hoc skirmish, find yourself stuck behind scenery or take the wrong route through the city, and you can fluff the entire mission in moments. To make this even more annoying, the game doesn’t checkpoint you during the mission, so if you blow the countdown near the end of a five-stage epic, tough. You’re going to have to do the whole caboodle once again. Given that the missions already give you deja-vu on the first attempt, this isn’t exactly a great design decision.


The more you play, the more you’ll also notice how generally ropy the physics engine is – horrible car handling rules OK – and how limiting the combat system is as well. The weaker robots – dubbed drones – can be dispatched with just a few blows, while named characters have formidable strengths (usually a seemingly unbeatable melee defence or special attack) but also an Achilles heel that, once spotted, soon leads to their easy demise. The only challenge here is spotting the weakness, particularly when logic has so little part to play. You can see, for instance, that Barricade needs to be knocked off his feet before you can get past his defences, but how are you meant to know that the only way to deal out damage is to pick him up and throw him around? Why do your blows have no effect on his health guage?

Now, you’d think that having a choice of campaigns would give you more variety, but in fact there’s no real change in gameplay from one to the other. Some Decepticons can fly, which should be cool, but at these points the game turns into a dodgy version of the old 16-bit favourite, Thunderhawk, with even more silly than normal time-restricted missions like ‘blow up twenty planes in three minutes’.

It’s nice that Decepticons can wreck the environment without being admonished for doing so – too much ‘collateral damage’ can be a recipe for failure in the Autobot missions – and you can even unlock bonus extras for mindless destruction. However, it’s annoying to note that while Bumblebee can fail a mission for trashing buildings in the Autobot campaign, he seems to have been given free license while you’re playing as the Decepticons. You’re trying to block his vicious wave attack and get in close for the kill. Meanwhile, he’s busy levelling an entire suburb without any qualms. I thought he was here to protect humanity? And while I’m moaning, why did two of the environments (the desert military bases in the Decepticon campaign and the secret government base in the Autobot campaign) have to be so ludicrously dull? Brown sand, brown military buildings, orange corridors…. did the art budget suddenly run dry? 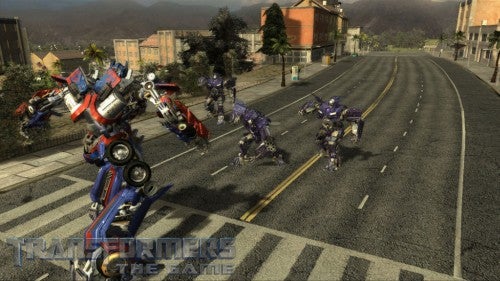 Imagine for a moment that you’re back in the eighties, and that you’re a Transformers loving child in the run up to Christmas. For months you’ve been asking for Jazz or Starscream, and beneath the Christmas tree you’ve seen a package of exactly the right size and shape. But then the big day comes, you open the parcel and find… Kevinator, a cheap Gobot knock-off who transforms into your mum’s beige Vauxhall Cavalier. Wouldn’t you be a little disappointed, maybe even heartbroken? 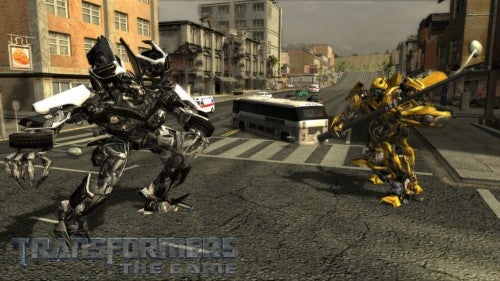 Well, that’s the Transformers feeling summed up. It looks like a great giant robot game, but in disguse it’s nothing more than another depressing movie tie-in that shows a glimmer of promise, then buries it beneath a mountain of half-assed missions and tedious, already well-worn gameplay. If Traveller’s Tales had had the time and the inclination to take the game’s strengths – the attractive graphics, the excellent animation, the spectacle of big robots battling on the city streets of Earth – and expand on the open-world aspects, then we might have had a winner. Instead, we have a game that consistently fails to deliver. The real tragedy is that, come this weekend, these guys will be slugging it out with the equally underwhelming Harry Potter for the top spot in the nation’s games charts while other, better titles languish in the doldrums below. Come on Autobots, is this really a world worth protecting?


Rubbish in disguise. For several glorious minute it looks like Crackdown with giant morphing robots, but then Transformers transforms into something much less exciting. Why bother?